I live in London and am about to have the beds planted (late I know). I'm thinking about watering... I currently have an oscillating sprinkler (and a timer) that I place in the middle of the garden and drape the hose around the garden. The sprinkler has the positive side effect of watering the beds and grass. Garden is 12m long, 7m wide and the tap is past the patio and down the side of the house (bottom right). 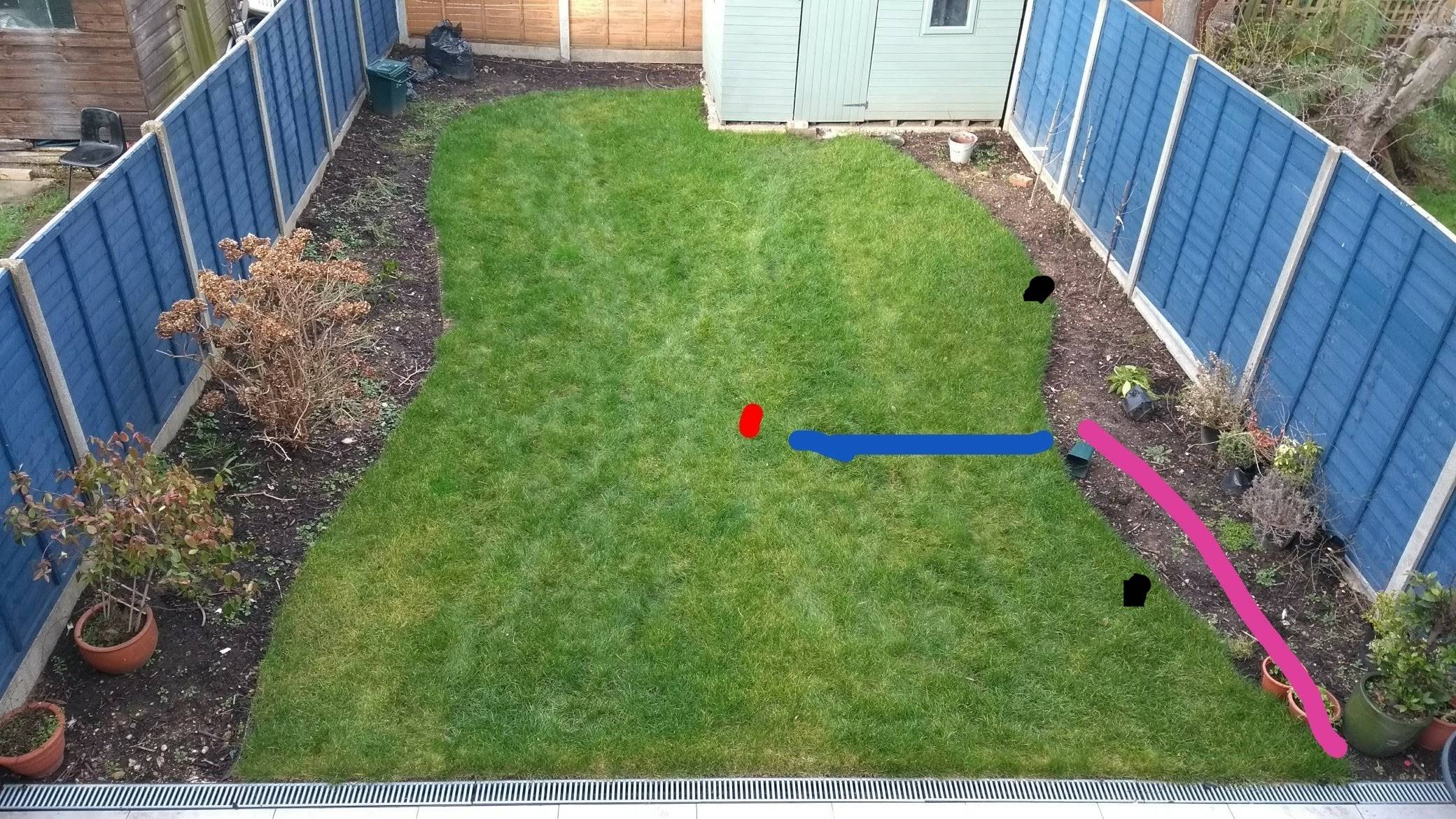 I am trying to work out what to do about watering (as automated as possible without lots of hose hanging about) :

Never had a garden before so I'm clueless! Thanks for your advice!

You live in the UK. Even in London, water is not usually an issue except during hot, dry weather in late spring and summer, and I know because that's where I live too. Given that's the case, a proper system with pop up sprinklers is a bit sledgehammer and nut, so to speak. You are right in that planting now gives you a watering issue right up until November, because new plants need regular water supplies. Larger shrubs and trees also will need watering during dry spells next year - after that, they'll be fine without for around 3 months,it'll be the smaller plants like perennials and groundcovers that won't cope for that length of time, 2-3 weeks being about the limit for those. But the fact is, even in hot, dry weather, your plants will do much better with a good soak (couple of hours) once a week than they will with more frequent, less deep watering. This is because you want the plants to put down good root systems, so any watering you do should be copious, because anything less won't penetrate very far into the soil; plants are then encouraged to put out roots nearer the surface, waiting for you to turn the sprinklers on frequently rather than going down and eventually seeking out their own water.

If the idea of getting the hose out and standing the sprinkler in the centre of the lawn for a couple of hours once a week seems too much, you could consider what's commonly known as 'leaky hose', but marketed as seep or soaker hose. This type of watering system comprises a fibrous hose which seeps water into the surrounding soil, and is intended to be buried so it's not visible. The drawback with it is if you need or want to dig an area over, either to remove unwanted plants or to plant something else, you inevitably end up either putting your fork through the hose or digging it up, then trying to bury it again. An example of that type of watering system here https://www.easy-irrigation.co.uk/landscape-watering-leaky-hose-c-240_50?zenid=50g5usiggbiprb1t9brr4ajfs7, but the usual advice is to use it every other day. This type of system is very useful for an area with planting that is not intended to be replaced, nor the area dug over, such as hedged areas, but many people do use this system regardless.

Alternatively, suggestion No. 2 in your question might be a good idea,but you'd need to be fully aware of precisely where you buried the hose - later, you're likely to be reducing the lawn to expand the beds, so knowing where you buried it and being able to find it without damaging it will be important.

Not the answer you're looking for? Browse other questions tagged watering sprinkler-system or ask your own question.

5
How can I attach three oscillating sprinklers to one hose?
7
How often should I water my vegetable garden in Arizona in the summer
2
What type of irrigation system works best with blueberries?
3
Simple DIY Sprinkler Sets: A bad idea?
2
Want to set up a timed watering system for 'remote' garden patches without utilizing underground water hoses
3
What hole spacing for a pvc watering system?
4
What needs to be considered when rerouting irrigation lines?
4
What is this Sprinkler Component?
0
Are there any disadvantages to using a Tree watering spike?