I found this tree in a forest park in Gothenburg, Sweden. It is ca 10 meters high. 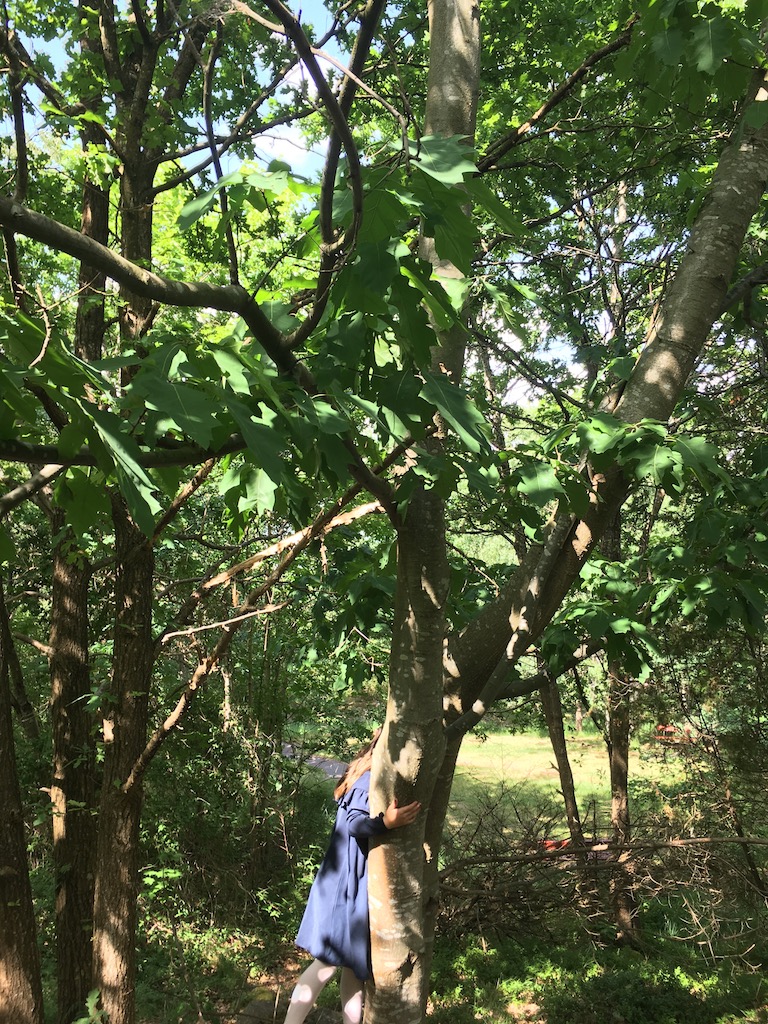 Next to a regular oak. 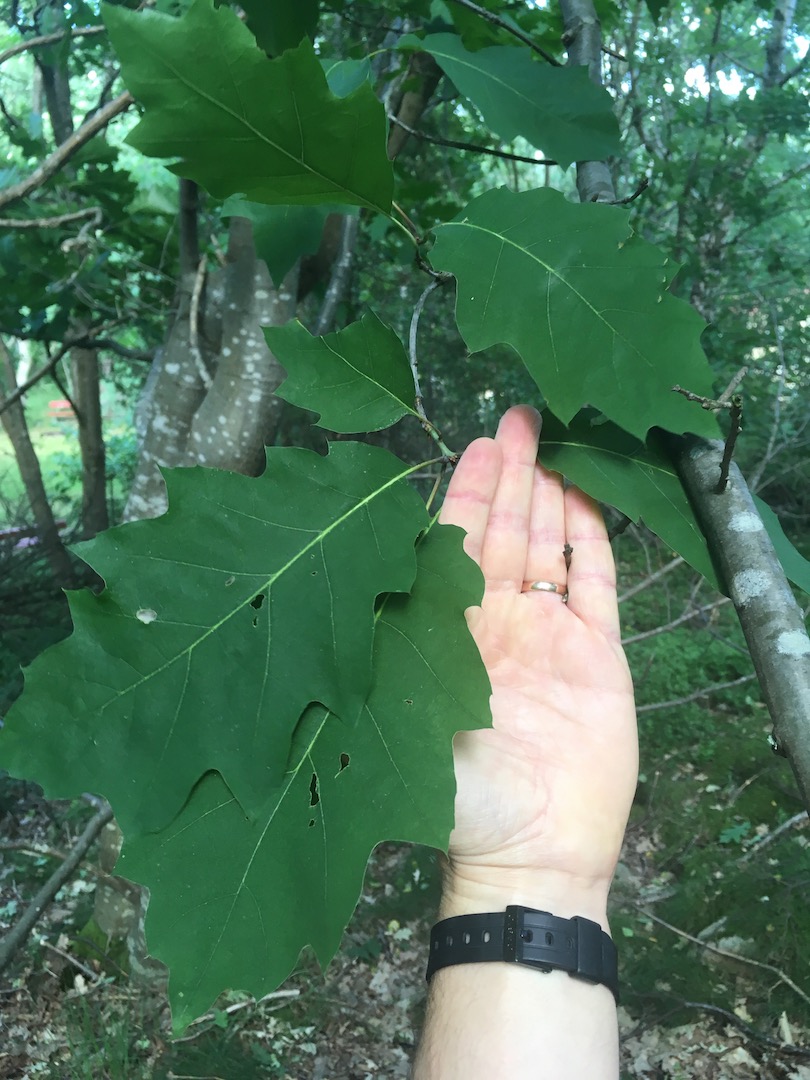 The largest leaves I found. My hand is ca 17 cm long. 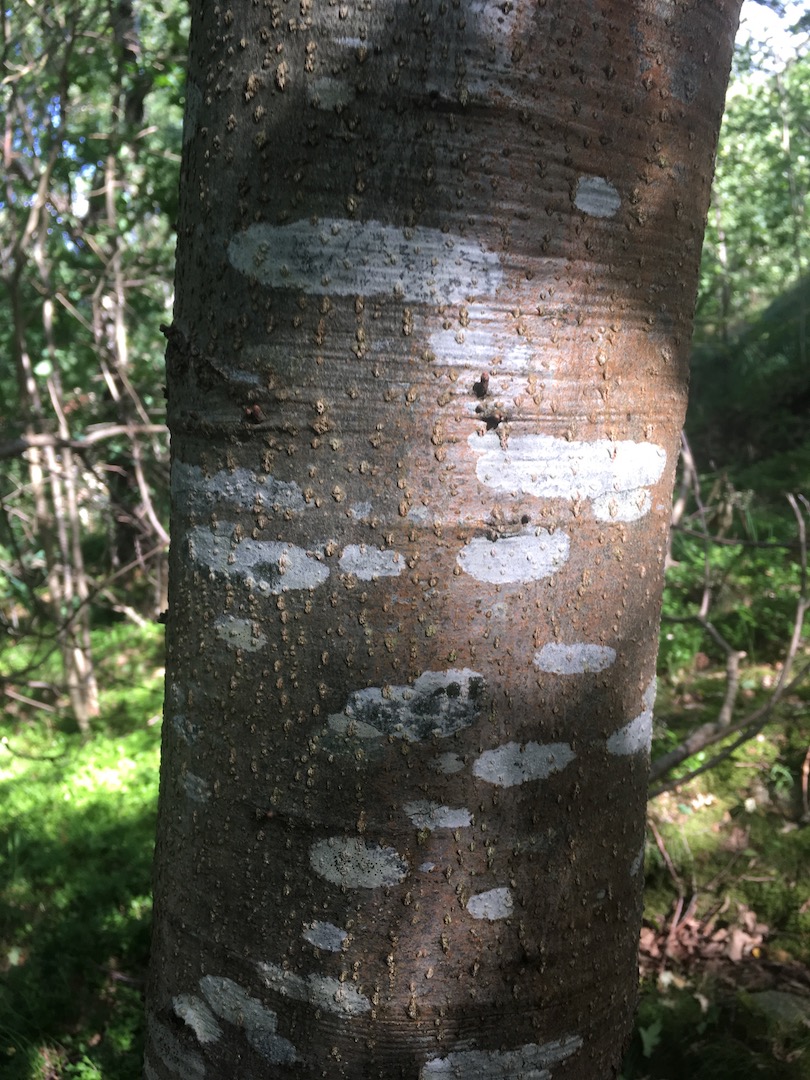 Stem is much smoother than regular oak. 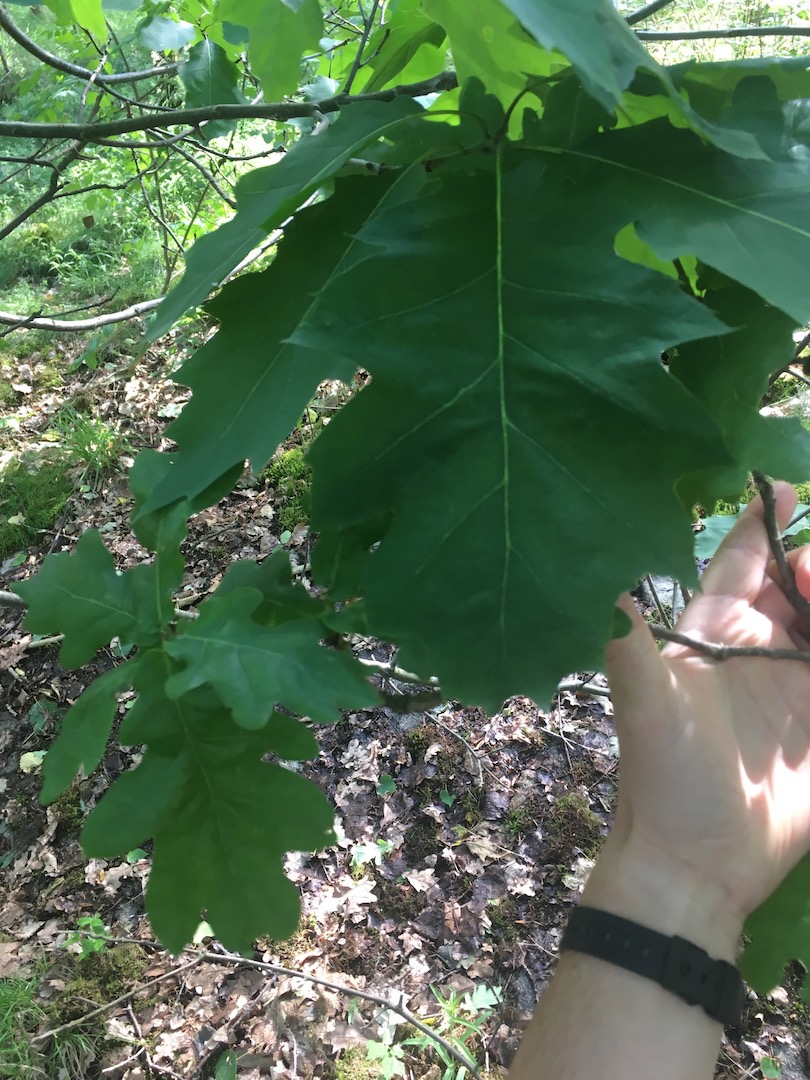 Leaves are much larger than regular oak leaves from the neighbouring tree (seen on left). 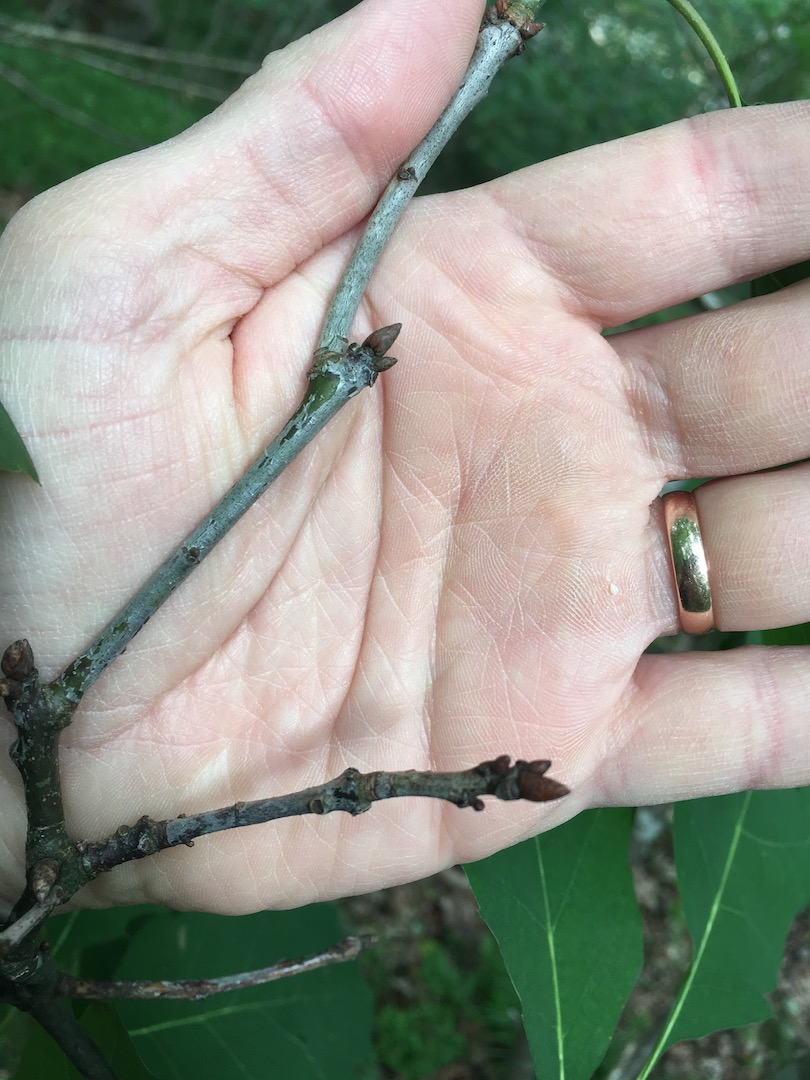 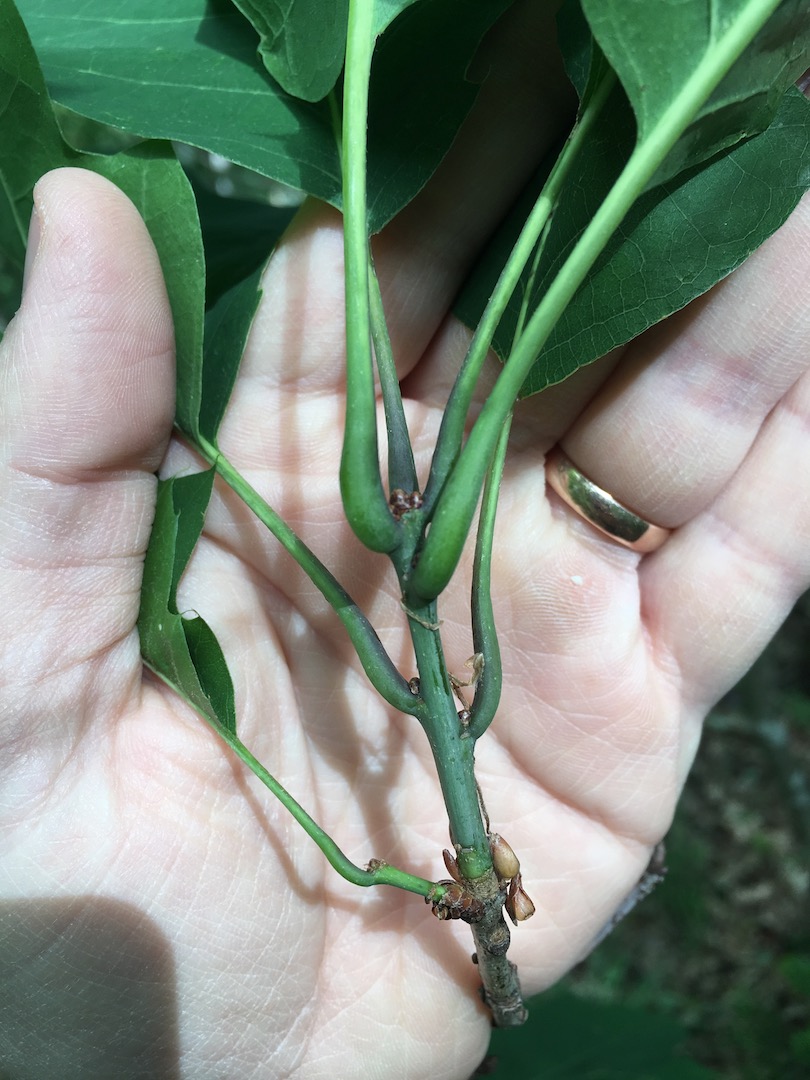 Buds are quite small (these are from June 21).

I would say north red oak, Quercus rubra. The tell is the serrations on the leaves; Q. rubra is in the black oak subgroup which has bristle tips at the ends of the lobes (as opposed to the rounded lobes of the regular oak, which from the photos looks like Q. ruber) and has no serrations, their margins are entire. Q. rubra has shallow sinuses and gets as large as you have shown when growing lower in the canopy in the shade, consistent with where you found them.

The buds of Q. rubra will be clustered at the tip, as is show in the photo, and because it was taken early enough in the season for Sweden, the buds were still developing, so they aren't quite as large as they would otherwise be. It's not a pin oak (Q. palustris) as some folks postured as pin oaks have much deeper sinuses and much denser canopies, even lower down.

Take a close look at the leaves from the link that is posted for the whitebeam. You'll see that the sinus on the whitebeam are very tight, the lobes almost overlap, and they have very pronounced serrations. The leaf in question has neither of those, so it can't be the whitebeam, even accounting for slight variation in the hybrid. As it's a commonly planted tree, especially in parks, and they can be planted by squirrels.

Quercus acutissima, the sawtooth oak, has much more lanceolate leaves with serrated margins instead of lobes. Their serrations are at the end of each view and they have many more that the leaf in the photo.

I hope this adds to the discussion!

That one is a bit of a pickle. It could be a number of things.

However, I am leaning towards a Swedish whitebeam, Sorbus x intermedia which is a triple hybrid.

It has Sorbus domestics growing habit 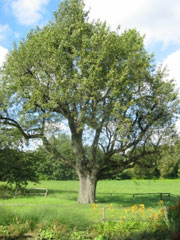 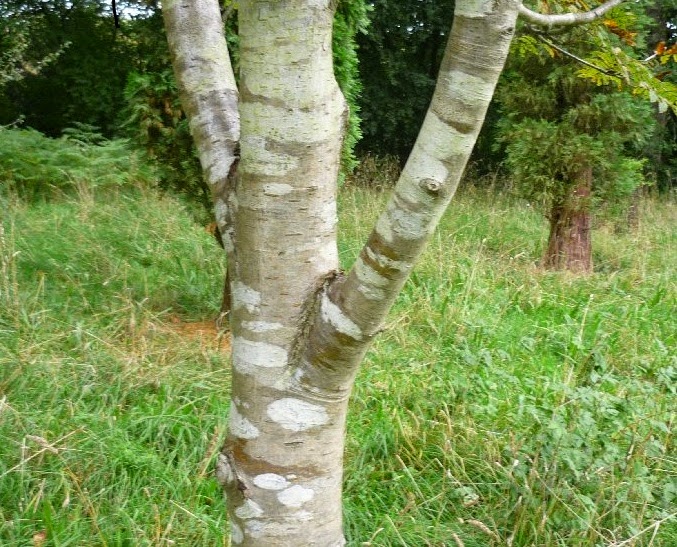 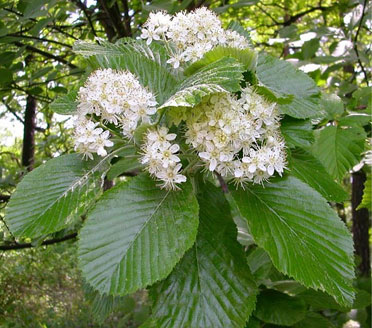 The thing is that even if the main traits of the hybrid are theoretically obvious, nature doesn’t stick to the rules and the DNA percentages of all 3 trees do vary. But the original is definitely Swedish white beam

This oak could also be Quercus palustris or Pin Oak. The leaves in the picture are leaves in shade and not indicative of the species for ID. Quercus acutissima is a possibility. Please send a picture of a newer leaf in the sun? This could also be a 'live Oak'...Quercus agrifolia scroll down a bit to see leaves like yours. What is the scale in your picture? What is the size of these leaves? live oak In your picture they look at least 4 to 6" long, more in line with Pin Oak.

UPDATE; This is not an oak, very sure it is Sorbus or Ash by the buds and bark. User 33232 was closest!

I think it is an Oak (Northern Red Oak), Quercus rubra. The only problem I have is that the tree is native to North America, and you find it in Sweden... If you say it is in a park, maybe it is planted and not native to Scandinavia?

The leaves look very similar as the third image here. The trunks shows similarity to a young red oak tree.