Is this underground compost system likely to work?

I live in an arid area with strong winds and very hot summers. I've tried a regular compost pile but have had problems with pests (migratory rats that seem to be attracted by the smell) and the heat: it dries the pile up faster than we can add new organic material to it.

I came across the idea of having an underground compost. For this purpose, I bought this small receptacle: 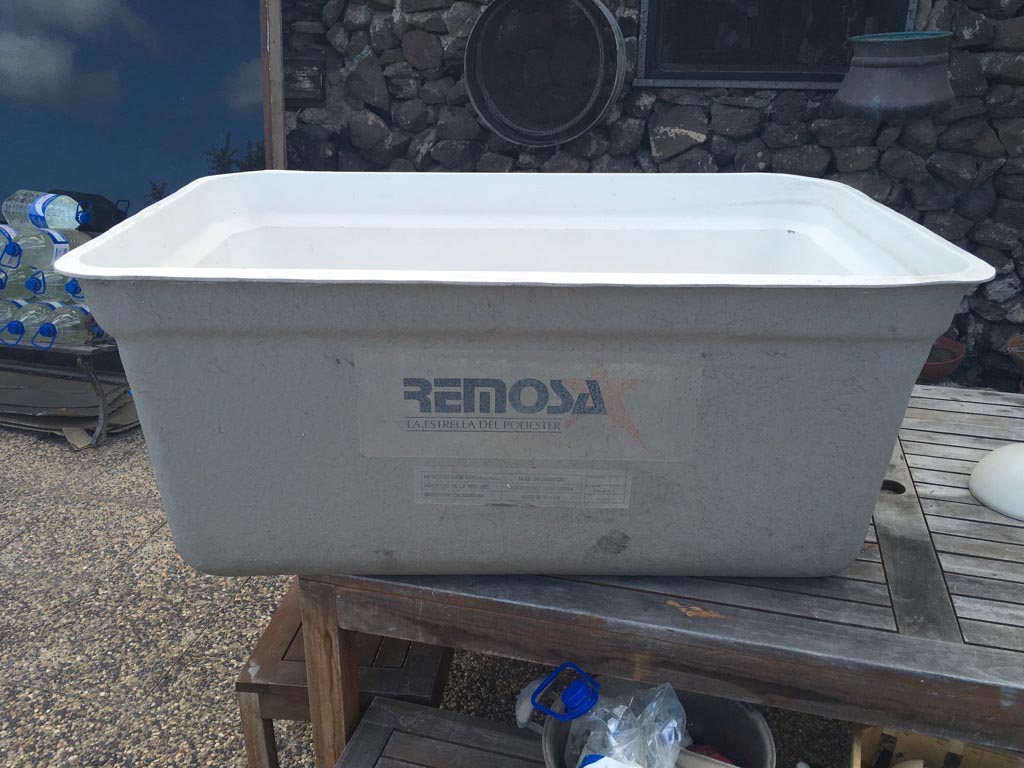 My idea was to dig a hole and put it in the ground and fill it daily with organic material. I'd put drill holes in it so the excess liquid can drain. Because our soil is very loamy, I'd surround it with a layer of sand to support drainage.

What I'm hoping for is a composting system that doesn't attract any pests, and doesn't get dried out as fast as a regular overground compost. When it's done, I'd just shovel out the soil and fill it anew.

Does this make sense?

Are there any weaknesses I'm overlooking?

What size should I drill the drainage holes, and how many?

Normally with a compost heap you either need to be able to take material out out of the bottom (via some kind of door), or to turn the heap over. This is because you will be putting new material on top, while the most rotted material will be at the bottom. So functionally this design will be difficult, unless you had many of them which you could cycle through, filling them one by one, then emptying the oldest of rotted compost and fillling that one with fresh material again.

Biologically it would probably be an improvement on having a very dry heap, but the bacteria do require a minimum level of oxygen, which might be hard to achieve if it's buried underground, and bearing in mind the bacteria will be depleting oxygen the whole time.

Personally I would keep the heap above ground but try to make it more moisture retentive (people here use old carpet, maybe black polythene would be better in your part of the world). Unless it gets above 60°c bacteria should still be active. Have you tried a domestic "dalek" type compost bin?

If this compost heap is mainly for waste food then you could try to encourage a colony of worms as the primary agents of decomposition, rather than relying on microorganisms, as this will be quicker, but in this case the conditions required would depend on the needs of the worm species.

Also look into a compost barrel. Some are quite tiny - but a medium / large one would be similar size to that container. You turn it every a day or few days (or when I remember) - turning mixes air in, and also mixes the moisture. It will keep water in (but drain the excess). And the only pests I've seen are things like ants and wasps which are easy enough to control.

Not the answer you're looking for? Browse other questions tagged compost or ask your own question.

9
What should I do with some volunteer potatoes growing in my compost pile?
9
How should I avoid pests in an open compost bin
4
Can i use a bokashi system to make mushroom compost?
2
What are proper methods to remove ripe humus from pile
8
How to pH test mulch and compost?
11
Would turning the compost actually slow down compost decomposition?
4
Will forest floor mulch work well for fungal dominated wood chip compost?
4
Should the first bin of a 3 bin compost system be bigger than the other two?
2
Compost for beginners
1
Ammonia smell in compost