Why would broccoli become all twisted at the root system?

I was looking at my broccoli plant today because it was at about a 60 degree angle, and noticed that the broccoli stem is twisting back and forth. What would cause this?

I'm doing charged core gardening, and have been moving the watering pipe around some to water more in different areas to promote growth in those areas.

I know this is a carrot, but imagine one of these carrots being a broccoli stalk right above the ground. 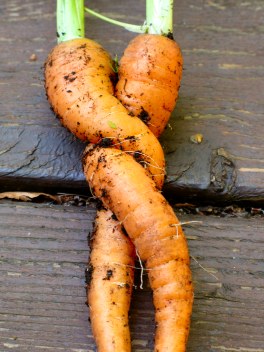 This is likely to be a disease called club root which affects many plants in the Brassicaea family caused by Plasmodiaphora brassicae.

You will likely get stunted growth above ground and root distortion under ground.

There are no control for this disease. It is not dangerous to human consumption.

However, the more brassicas you grow, the more disease you feed as the fungus can survive dormant in the soil for years. Your choices are:

Stop growing plants from the Brassicaea family for at least 4 years to starve the disease.

Well, my first thought is that a little twisting it isn't necessarily a problem or harmful. Those carrots grew to nice eating size anyway. Granted it's not ideal, as the roots will have a little harder time spreading out. The carrots could be harder to wash and may be harder to sell. But intertwined roots are very common.

Twisting can happen in a myriad of ways, all of which involve a root getting diverted or damaged, especially when it is tiny. The carrots may well have run into each other underground, for example, and something had to give. A rootlet can hit the edge of a pot in which it is growing, which is why root-bound plants tend to have crazy-twisted and even strangled roots. So one possibility is that if you put out broccoli seedlings, the twisting was set in motion even before the plant reached your garden. A rootlet can hit a tiny rock. An insect can nip off the tip and the root then starts to grow in a slightly different direction. You get the idea - anything in the way can send a rootlet off in a new direction, and from there it reaches what it reaches, and does its best to keep growing regardless. Then it gets bigger and we notice.

Twisting is far more serious in perennials than in annuals. I won't plant out a potted tree whose roots are growing in spirals around each other, as eventually the twisted roots will hurt each other. Annuals will die before the roots get so big as to strangle each other with insufficient other roots to compensate. When I pull up vegetable plants in the fall and see the roots, plants some of which have done beautifully, twisted up roots are pretty common.

Not the answer you're looking for? Browse other questions tagged growth brassicas back-to-eden or ask your own question.

12
How dangerous are the roots of brassicas (cabbage, broccoli etc)?
12
What is the best time and method for planting cauliflowers / broccoli in a southern US climate with frosts?
9
Why are the tops of my Brussels Sprouts turning purple?
3
Why would cuttings from the same hibiscus exhibit different growing behaviors?
1
How can I keep broccoli flowers from forming the same day the bud appears?
2
Why do weeds re-root in wood chips with Back to Eden?
1
Why is my purple sprouting broccoli growing pods?
1
Why has my broccoli fallen over?