What has damaged this tree?

What type of damage has this tree suffered that has made the bark separate? I suspect a lightning strike.

[Trees struck by lightning may exhibit variable symptoms. When lightning hits a tree, water in the cells beneath the bark is heated past the boiling point. The resulting steam causes an explosion that removes a strip of bark. A crack in the bark appears when a continuous groove of bark is stripped along the entire length of the trunk or main branch. A crack that does not run the length of the trunk may indicate a side flash. A side flash occurs when electricity strikes the tree, travels down the trunk, then jumps to an object with less electrical resistance. If lightning strikes a bit deeper, the entire tree may blow apart. The tree may or may not have blackened or charred areas on the trunk.]1 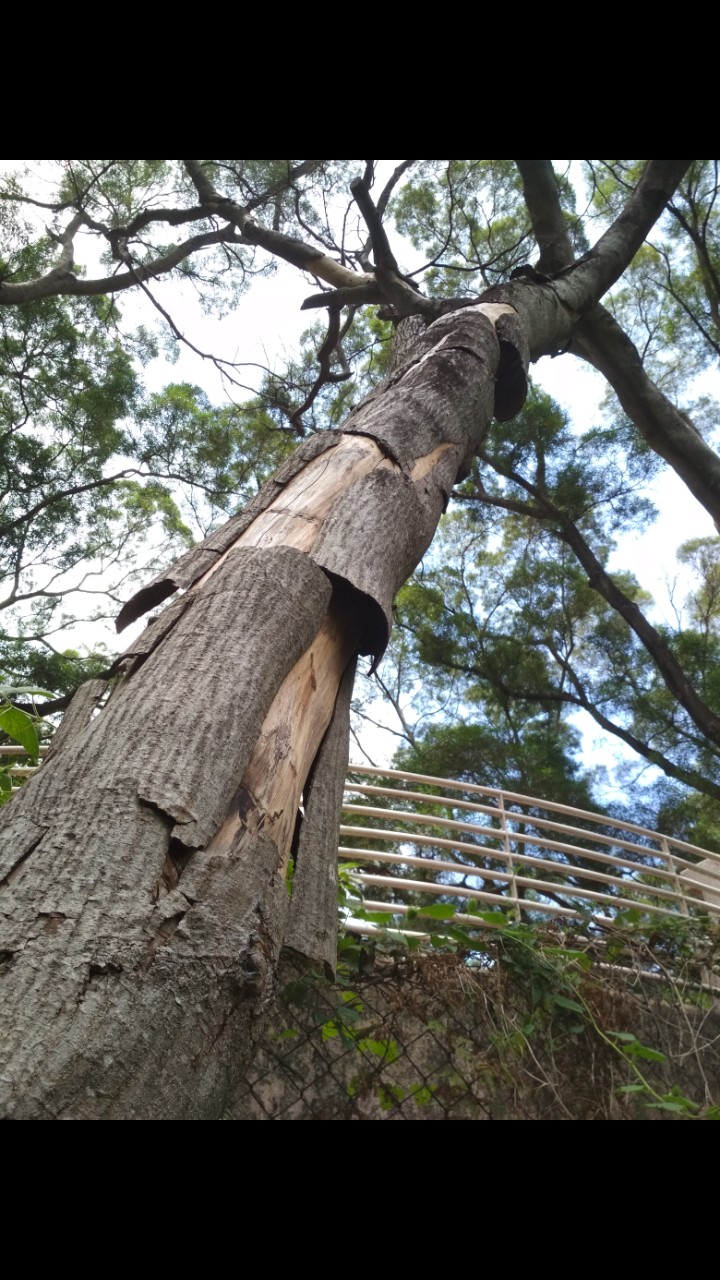 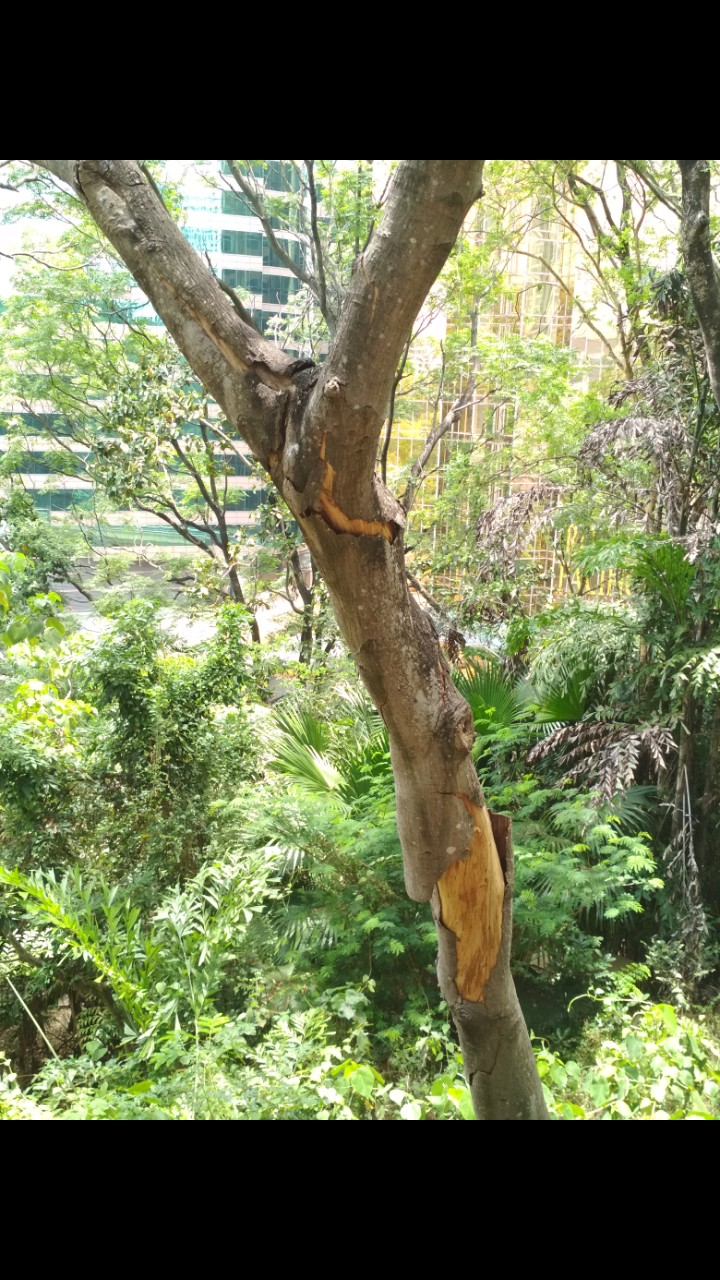 The blackness here looks like charring to me which - along with the winding lightning style patterns - makes me suspect exactly that. 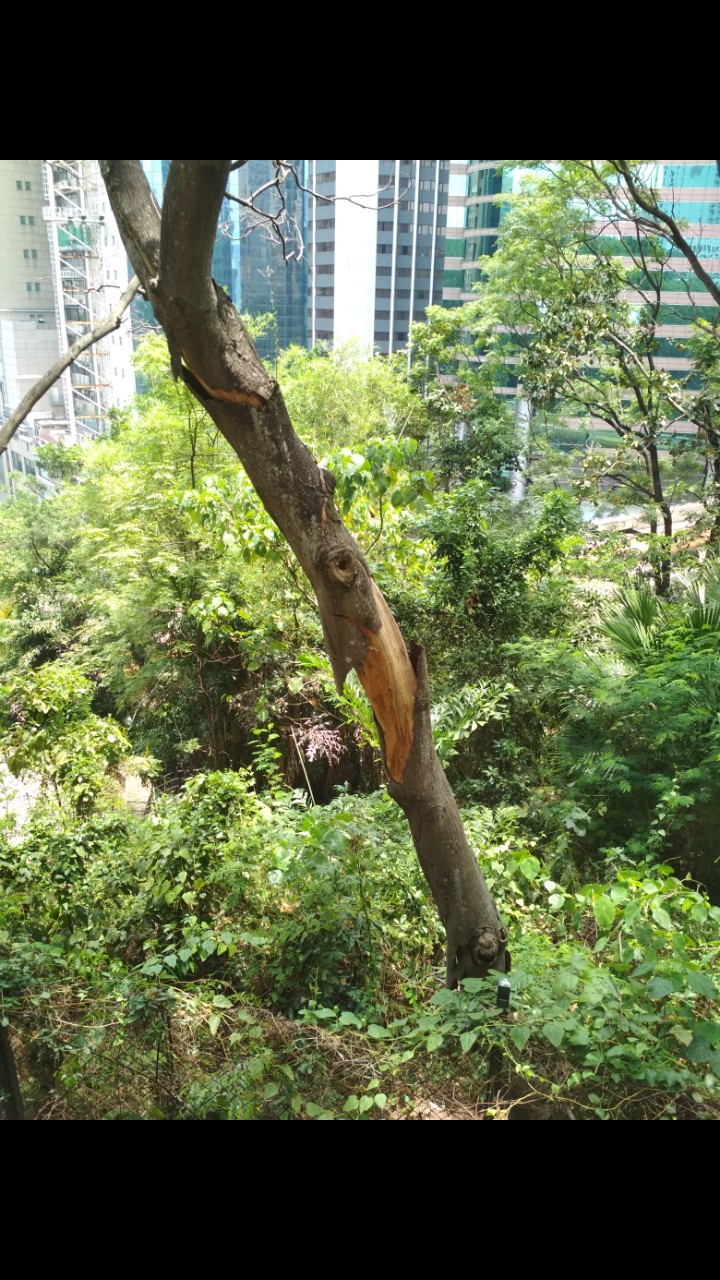 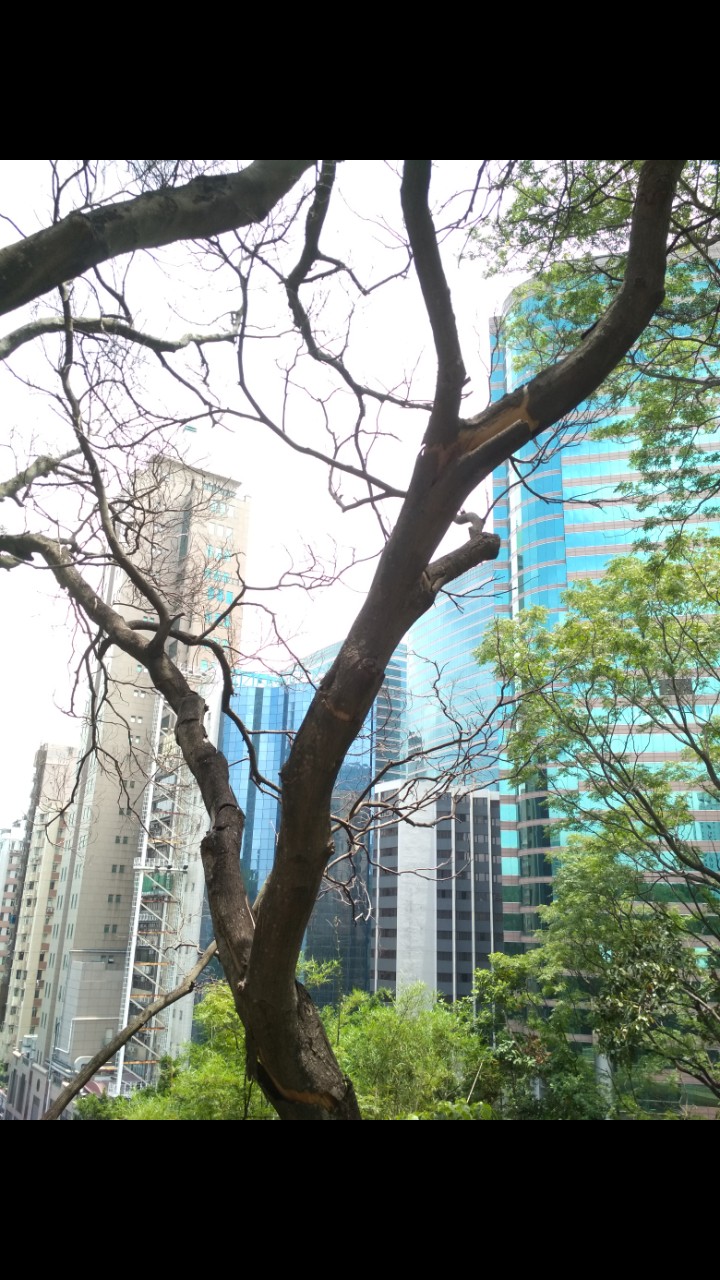 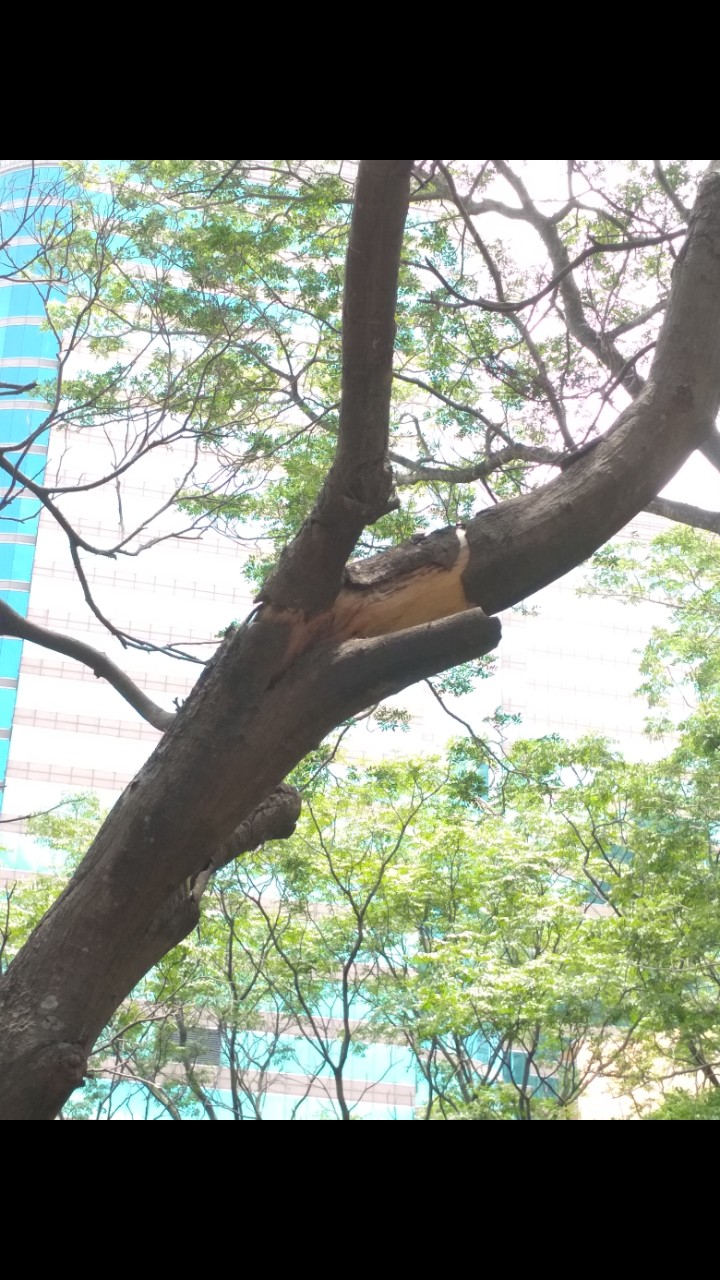 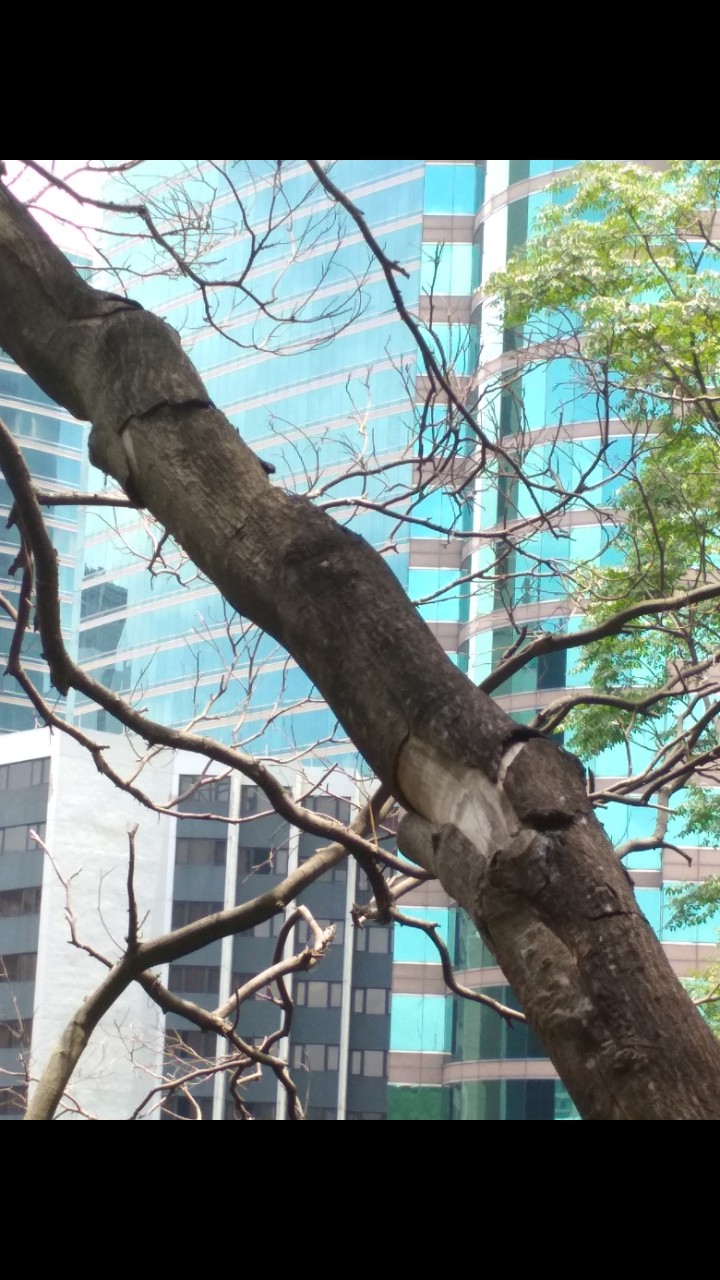 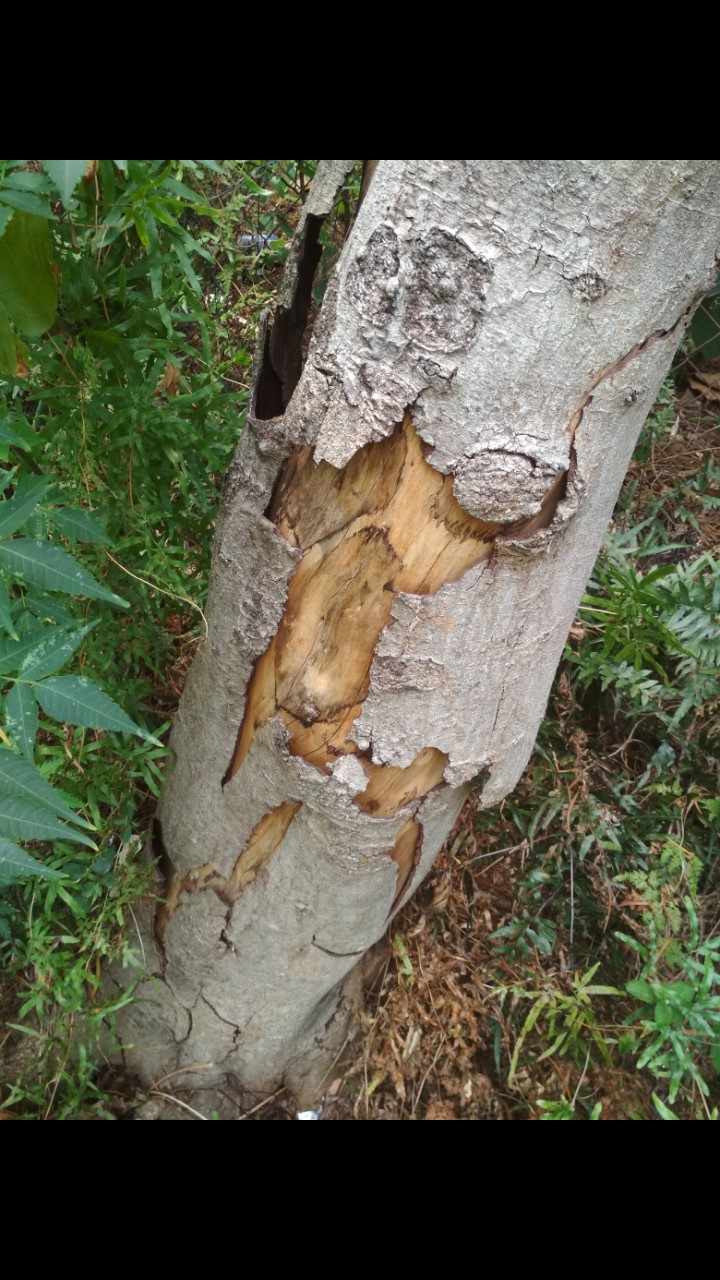 How can I determine exactly what has killed this tree?

Actually this could be sun-scald. This happens to old trees who are at the end of their lives or weakened by physical stresses.

It possibly was brought on by lightening but the damage is so extensive that if lightening was the culprit, the tree would be totally chard.

Sun-scald occurs randomly but generally occurs when the individual has been stressed. Drought, excessive rainfall, fungus attacks, or even acid rain.

Trees communicate via underground connections with their root systems and if one of the trees present a danger to others, communication is severed as well as resources.

I cannot see it clearly but there is obvious damage on the tree’s cambium exposed by the peeling bark. This gives me an indication that the tree suffered from an attack such as honey fungus. The tree seemed to have heeled itself but it would have been quite a strain for it.

The only way to confirm is a professional arborist. Or someone could look if there’s any oozing from the bark.

In my experience, I have raised trees and plants grown by many means and all cared for in the same manner. But not all thrive, some die, some are weaker, some are stunted... and so on. This why this question is sparking such a debate

UPDATE: I am now more convinced this was lightning, not old age. All the other trees were more than likely planted at the same time and they are doing fine. Pretty amazing thing I did not know. Thanks Johan.

13
Damaged Tree Heather: can it survive?
8
Second opinion: Arborist says tree needs to go
7
What's the best way to care for this damaged plant?
3
Will cedar trees damaged by fire grow back?
3
Fire Damaged Bay Tree (Laurus nobilis) - What to do?
3
Will cutting away root(s) of a tree growing under my basement floor kill it?
1
What to do about damaged tree trunk bark
0
How can I help this tree flourish?
1
what to do if No. Calif. oak tree has water within trunk
1
Damaged peach tree is growing branches near bottom