I had 3 stems of schefflera plant but 2 of them died and I was left with one. It was doing well but the roots were minimal and I found some worm in the soil that may have damaged the stem right above the root. I washed it and cleaned it and repotted it in new soil.

Then I read cutting the the top part of the plant right above the node will stimulate it to grow further and I did that as you can see in the second image. However since then its branches have been droopy and are wilting. Is there anything else I can do about it? I do no want it to die as it is from a dear friend. I'm keeping it under good sunlight for 8 hours and at room temperature. 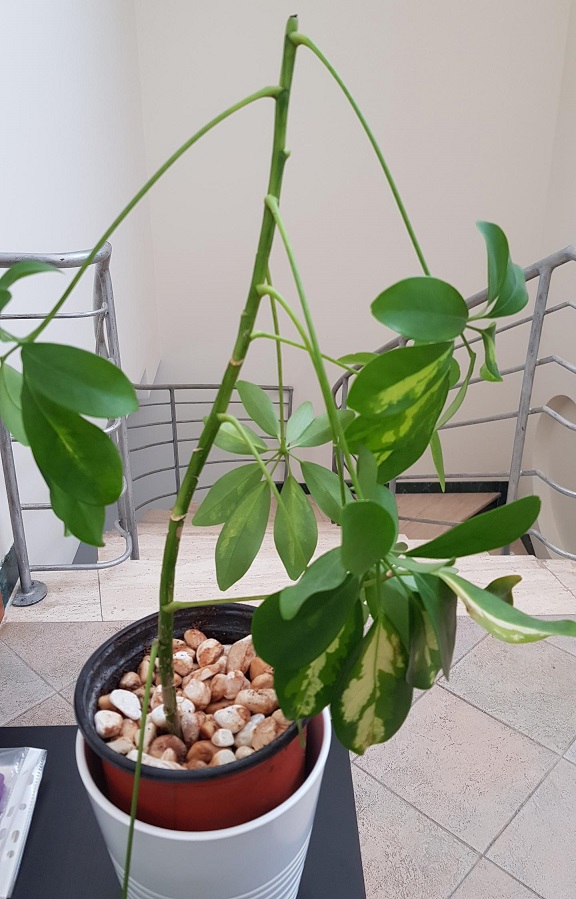 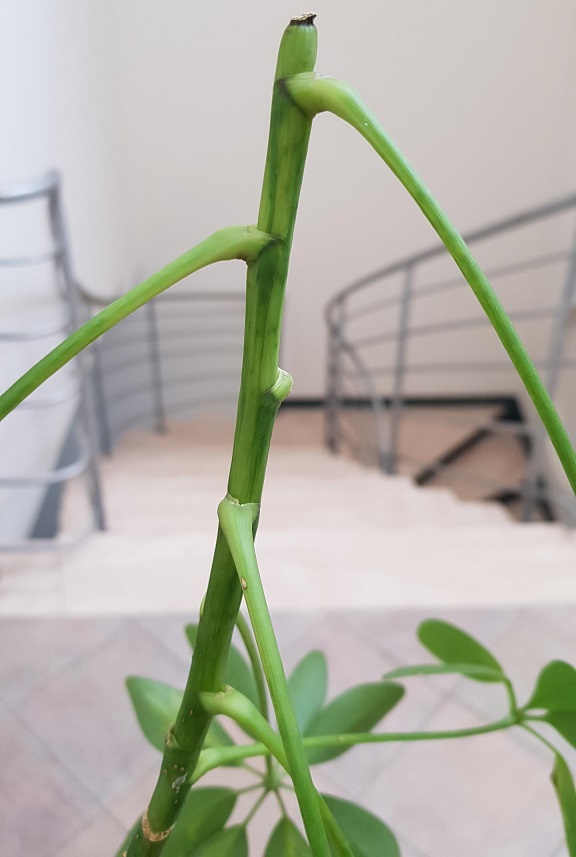 This is a week after repotting and finding the worms. This is how the root looked like. Is the white stuff fungus? 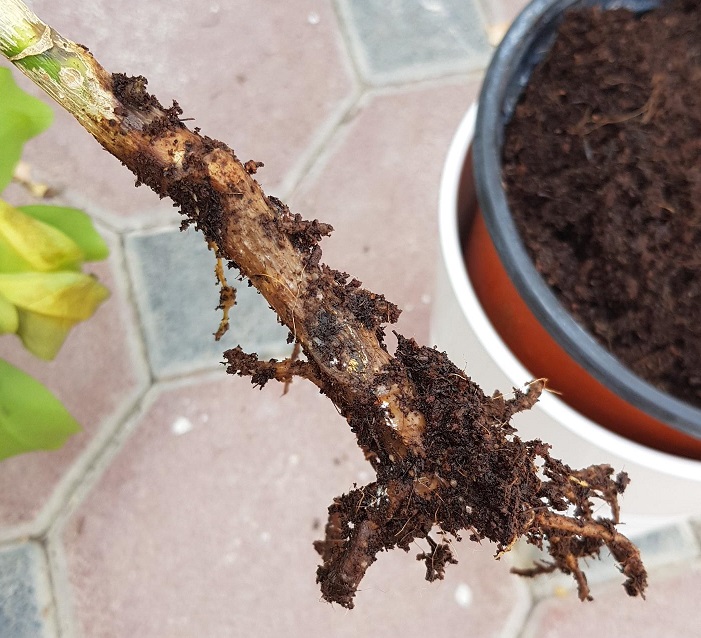 This is how much roots it has: 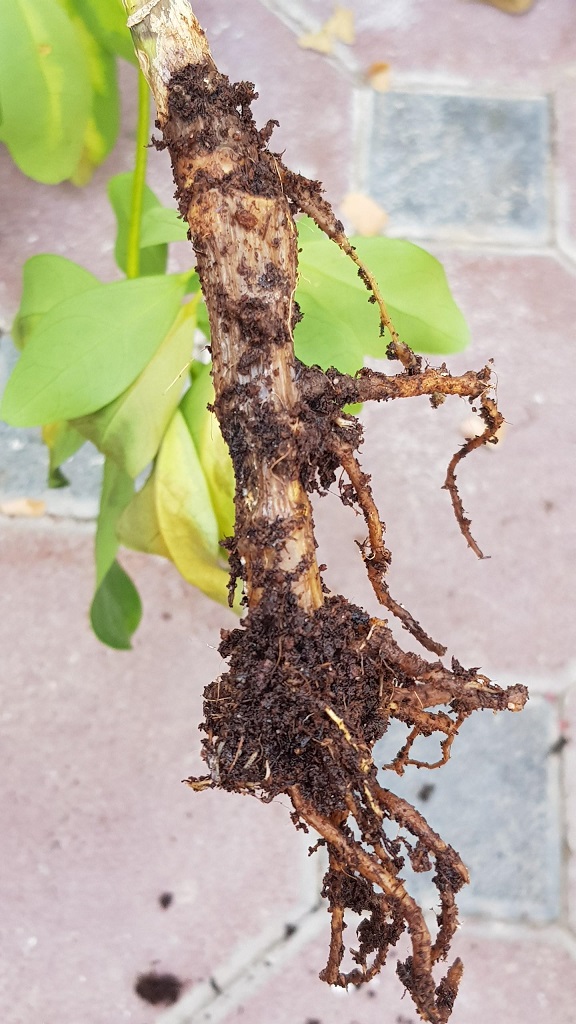 This is after I washed it off the soil so we can have a clearer look at the roots ans the stem: 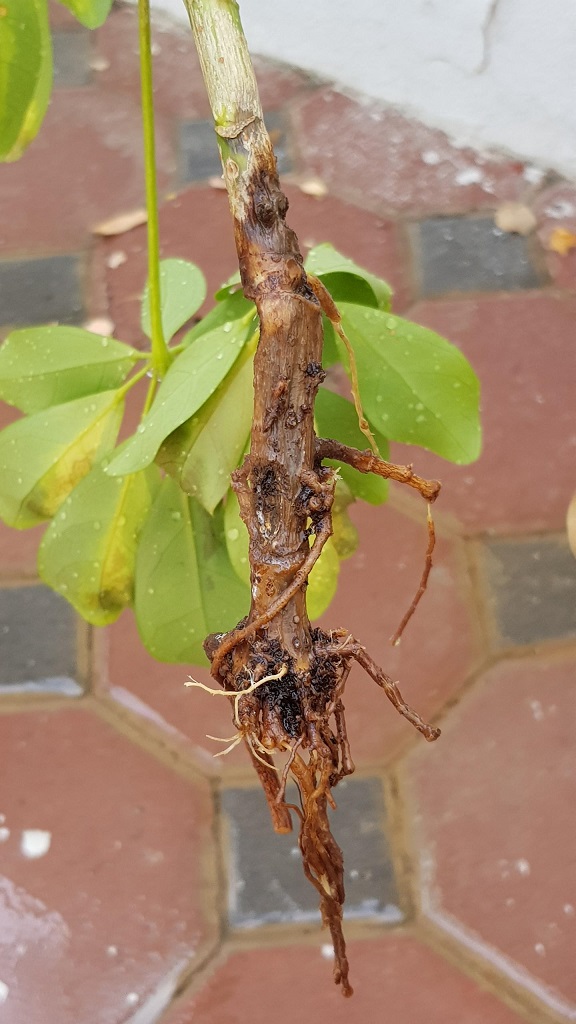 Can I cut off the lower part and hope for it to revive and build a new root system? This is what I did with the side branches: 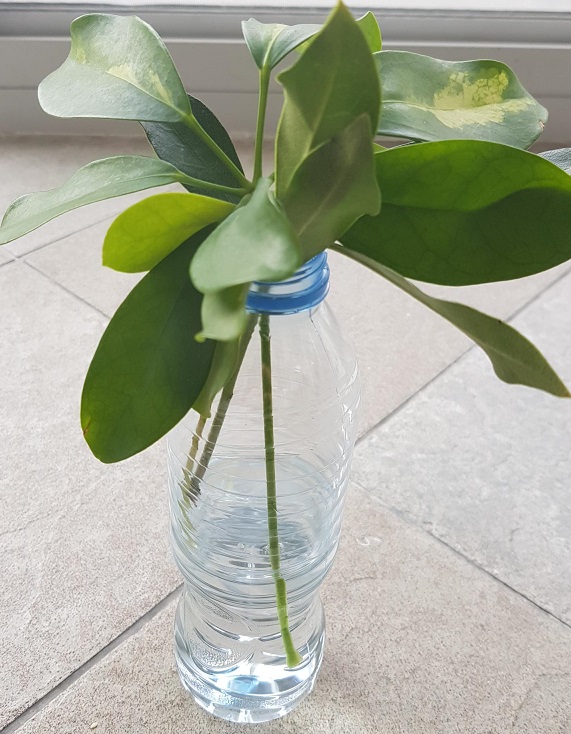 Update: Ok, instructions followed and my fingers are kept crossed for any new growth from any of them, pics attached. 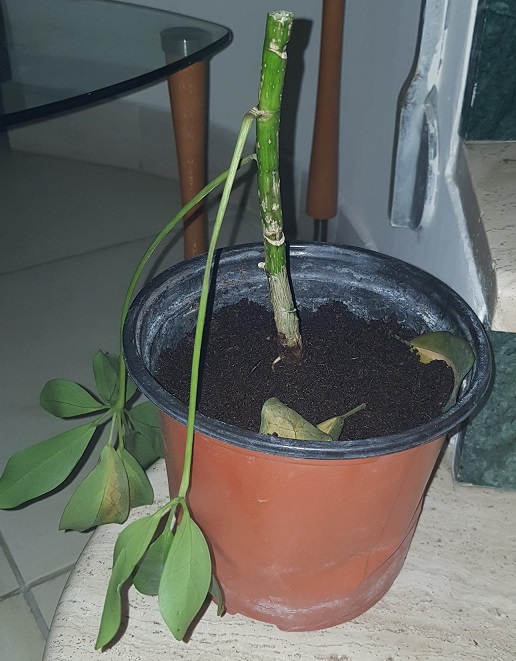 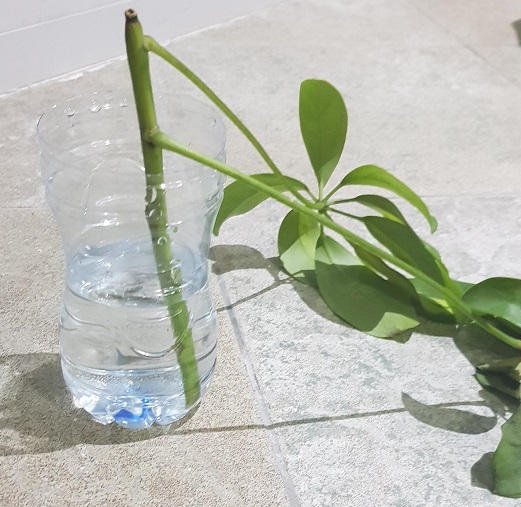 Will follow up with pics as soon as a new root or develops or otherwise in 6 wks hopefully. Thanks a lot:)

So heres an update after a week of cutting up the stem as per instructions followed.. in hope new roots will be made and the other severed stem was cut into half and put in water.. but all results are drastic. The mainnstem left in the soil was shrinking and getting a peau d'orange appearance ( the dotty skin appearance of oranges) as.. it was rotting away slowly and so did the stems i kept in water. Images attached..this was the end of.my.schefflera plant.. i wish i did not decide to cut the top of it as it was doing well till then. [ this is the main stem left in soil.. most of it turned yellow]. (https://i.stack.imgur.com/6TKOt.jpg) 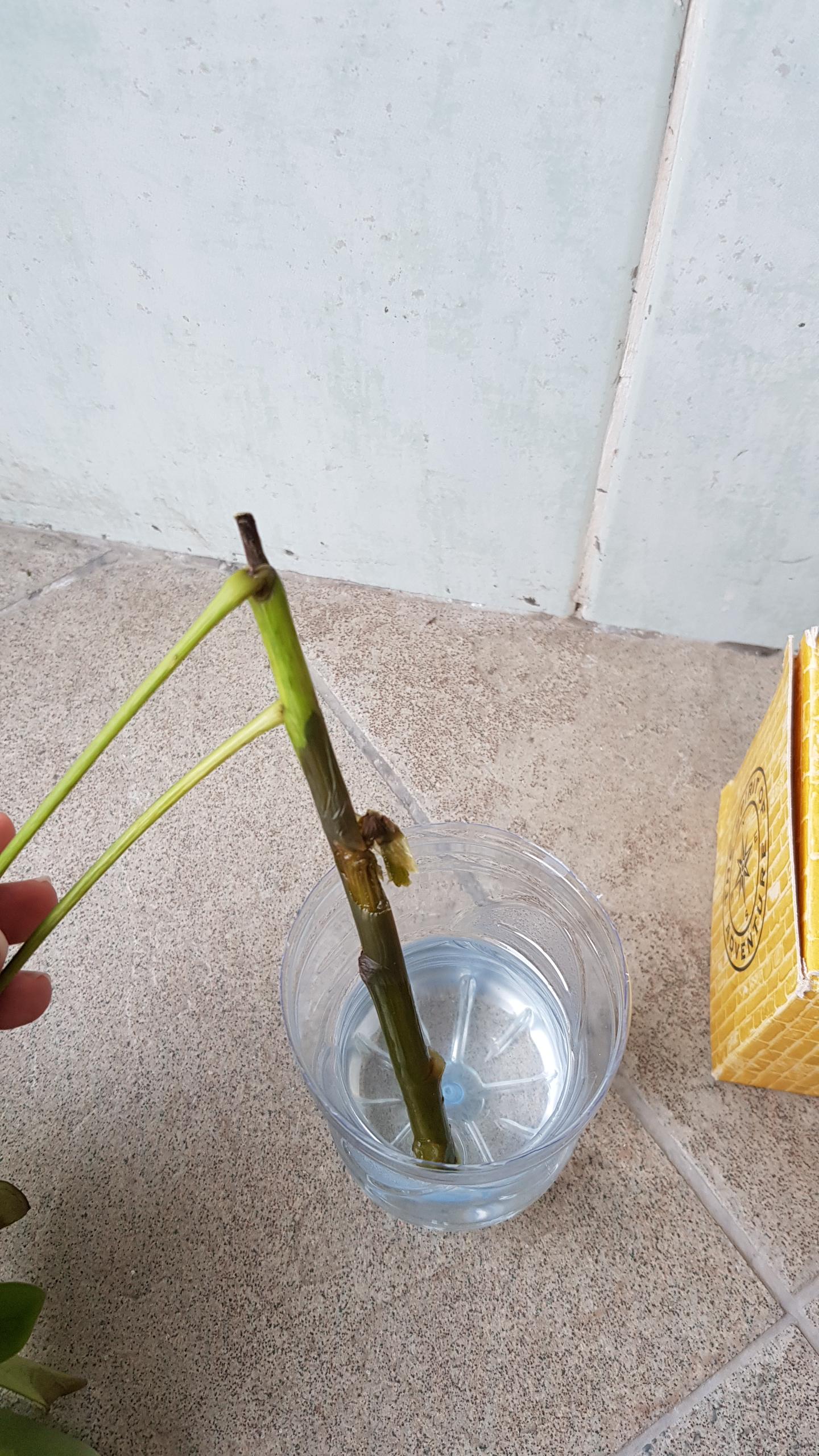 Regarding the side braches of leaves that i have put in water for roots to grow...its still has no roots but its green and thriving well.

Something has caused the roots to die back, but there is hope - those thin white roots in your penultimate picture are healthy. However, the top is wilting because there isn't enough root material to support its growth as it is, so cut that main stem down to the second leaf joint from the bottom. You can try rooting the part you cut off - it might not work, but it's worth a try. Cut the severed stem into two sections and pop the bottom ends in a bottle of water, like you've done with the side leaves you saved.

I'm not sure whether you have once again removed the plant from its pot, or these images are from before you repotted it, but leave it alone in its pot, don't take it out again. If you did remove it again, repot immediately. Keep watered but allow excess water to drain freely away from the bottom of the pot and empty out the outer container after 30 minutes. Water when the surface of the soil in the pot feels just about dry to the touch, but not so dry it's shrunken from the sides.

I suggest you find a saucer or a small tray to stand the pot in - that cup or white pot you've used isn't deep enough by the looks of it, which means water will be sitting in the bottom not in contact with the plant, which isn't healthy. And neither is it a good idea to keep the water level topped up inside the white pot so that the soil is in contact with it - rot is likely to result. While the plant is recovering, limit its sun exposure to morning and evening only, or stand it somewhere it receives one or the other. Once it starts growing healthily again, by all means move it back to a sunnier spot.

Chopping off the top is not your problem, it is the water in the pot. I would get rid of the rock on the top, transplant this plant into sterilized potting soil. If the roots are circling and massed use a pot 2" larger in diameter. Break up some of those roots.

I'll bet if I pulled the pot up out of the other pot I would find pond scum and alien organisms? Grins. Cutting that top would not hurt this plant at all. Do try to cut it a little closer to the junction of that leaf; leave 1/8 inch, versus 1/2 inch. Leave it alone. It is no big deal.

Need to look at the roots, the soil and watering. Have you ever fertilized? Thanks.

Not the answer you're looking for? Browse other questions tagged houseplants pruning propagation or ask your own question.

12
Can I save an old, weak peony?
3
Dendrobium nobile: How and when to cut and pot new plant (keiki) from mother?
4
How can I propagate a rubber tree plant from a cutting?
3
ZZ Plant in ICU. Root rot due to water. Need help quickly
7
Should I cut the top of my Schefflera?
6
Should I redo this pruning cut?