Fire Damaged Bay Tree (Laurus nobilis) - What to do?

We have a fairly large (and old) bay tree in our garden by our garage, which I pruned back quite a ways last year (about ~1foot off all sides) as it had grown too large. The hope being that it would sprout back happily this year, which it has started too.

Unfortunately we recently had a fire in the garage (tumble dryer went up in flames, nobody hurt though!), the heat and flames from which have caused severe damage to one side of the tree as can be seen in the pictures below: 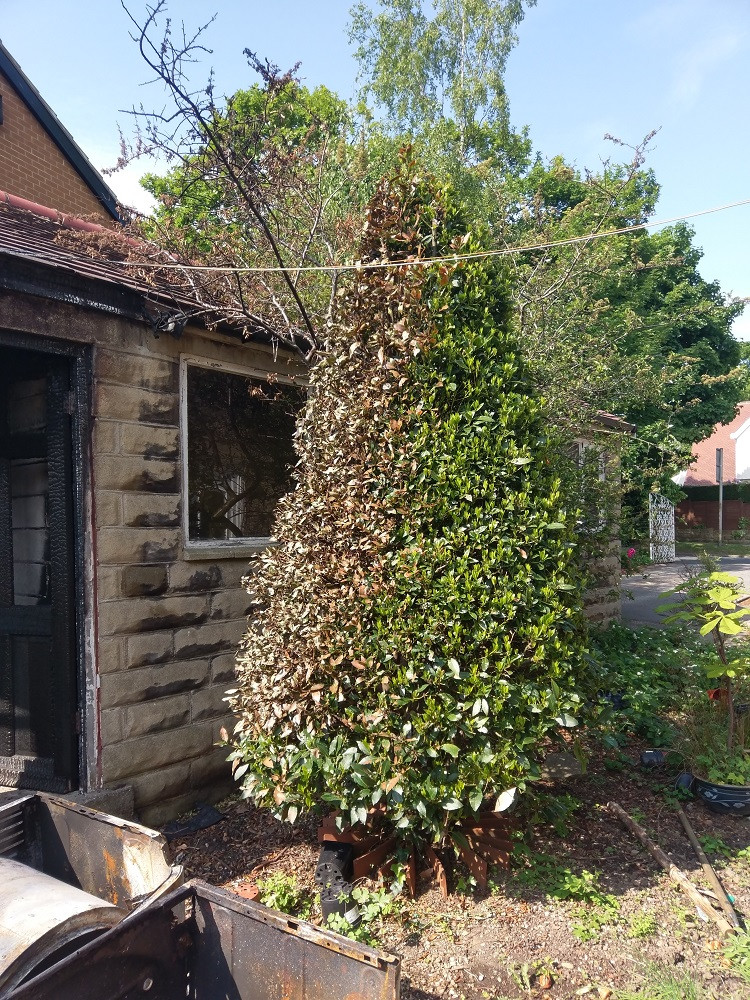 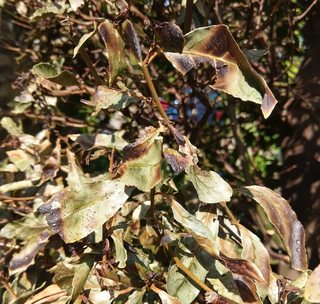 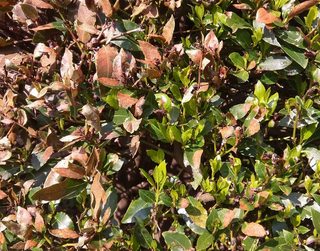 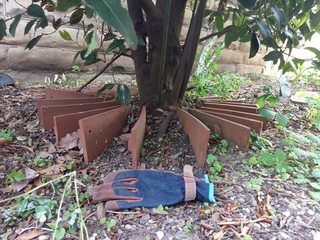 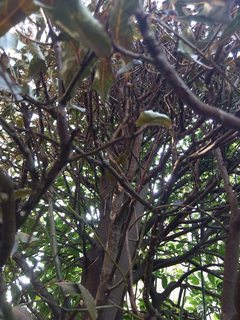 I'm wondering what the best course of action is to try and help the tree recover.

As I say, I'd pruned it quite far back last year. There wasn't much foliage, so the fire has pretty much destroyed all the leaves on that side.

Should I just leave it and hope that it grows back? Should I prune off the dead leaves? If so, how far back would you recommend going?

I'm in the UK, so currently its the middle of spring (May 22nd the fire happened). We live in Leeds (53.8 degree latitude) where it is typically a mixture of cool drizzly weather, and the occasional warm (23 *C) sunny day. Although we've been having a lot of sunny days over the last couple of weeks, so having to do a lot of watering.

The burnt side of the plant is the westward wide (the picture is taken facing the north-east).

The house is pretty near a very old sand-stone quarry, so the soil is full of sand. We have from time to time mixed in compost from our own heap (composted leaves, grass, and vegetable matter).

I know a little about pruning, but would definitely class myself as an amateur. I know the best way to prune varies from plant to plant.

I'll add a photo of the base and inside of the bay shortly. The base is quite a large trunk with some terracotta tiles around it, originally to stop gravel from washing away, but now just decorative.

That is a striking looking bay tree. Personally, I'd be inclined to leave it to sort itself out. If you prune it you will destroy that nice conical shape and it will be interesting over the coming years to see (hopefully) how it recovers. And it certainly provides a talking point in your garden - not many gardeners can lay claim to a neatly half burnt bay tree like yours! I'd remove all the debris around the base, though (as stormy suggests).

The rule for pruning is only cut off less than 1/3 of the plant at any one time. Any more than that puts a plant into shock and stress. Your plant is already stressed. Dead stuff can safely be removed. Plan to rehabilitate this plant in stages. Get rid of the dead stuff.

What is at the base of this plant, shrub? Iron of some sort? What time of year is it what zone where you and your plant live?

I'd be inclined to THIN this little tree large shrub, cutting off dead branches and removing some of the density. Allow more air flow. This plant is most certainly alive and savable. Need to know what you have added to the soil, where you live and how much you understand about pruning.

What is the little tree that has its branches up into your roof? That needs addressing. Or pruned. The branch that is touching your home needs to go. The rest perhaps later. Talk about this in another question?

Not the answer you're looking for? Browse other questions tagged pruning tree-care or ask your own question.

15
Is there a traditional method/style for pruning a Chocolate Silk tree?
4
Should I prune apple/ pear/ nashi tree runners in early summer?
9
Bay Leaf Tree (Laurus Nobilis) with severe scale
3
Why is my avocado tree dying and how can I reverse it?
4
Why aren't my roses and fruit trees blooming as much as they did last year?
5
How do I prevent basal shoots from bay laurel (Laurus nobilis)?
2
How do I go about pruning a mature fig tree to a smaller size?
3
Missed apple pruning window