Prunus cuttings used for pollination: How to prolong their life? 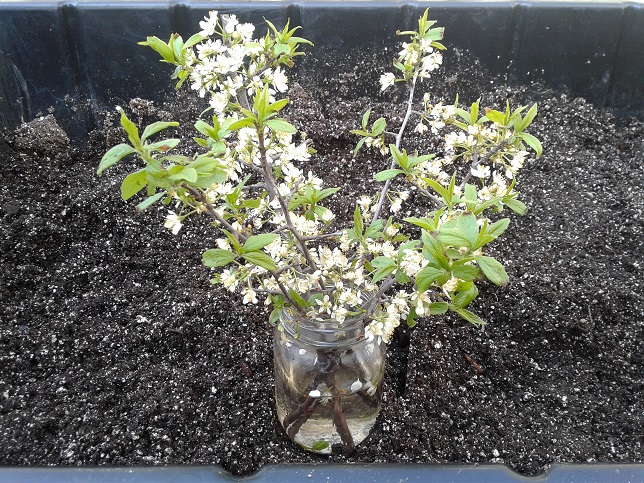 The cuttings have lasted for about 3-4 days in the water, but now the leaves are browning and the flowers are wilting.

Meanwhile, my hybrid plum trees are still flowering, and still require pollination. In the future, I'd like to squeeze as much life as possible out of Prunus americana cuttings.

Is there anything I can do to improve the health of the cuttings (so that they flower for longer)?

It occurred to me that my cuttings are not really all that different than the cut flowers that can be purchased at florist shops. Florists often use specialized plant food or preservatives to prolong the life of cut flowers.

My local florist uses a product called Chrysal. I purchased several packets at $0.25 CAD a piece and added the prescribed amount to the water. It seems to have worked. The cuttings with Chrysal have lasted longer than the cuttings without the additive (although I haven't specifically quantified what the difference is).

According to the Brooklyn Botanical Garden, different additives can be used to prolong the lives of fresh cut flowers. Experiments were performed with various substances mixed with water, including aspirin, vitamin pills, vinegar, pennies, and flower food to test their effect on cut flowers' lifespans.2 Each plant was placed in the same environment and the same type of plant was used in each vase.

This research found that the best additive for flowers was the retailer-provided "flower food" that is usually given with a bouquet. Plants are known to thrive in an environment where there are few bacteria, plenty of food for energy, and water uptake is encouraged. Flower foods contain an acidifier that helps to adjust the water's pH. With a lower pH the water and food conducting system within the flower can work at maximum efficiency. The sugar in the food will be used by the plant as an energy source, which had been lost when the flower was cut away from its root. With these nutrients the plant will be able to fully develop. Finally, there are stem unpluggers that will make sure that the flower can easily take up water and nutrients that can later be used to take care of the needs of the rest of the plant.3 This combination gives the fresh cut flowers everything that they need to survive longer. When tests were carried out in St. Mary's College C.S.S.p, Rathmines, Dublin, however, results showed that glucose was more effective at prolonging the life of cut flowers than the commercial plant food. The experiment was carried out as part of the Junior Certificate Science Examination set by the Irish State Examinations Commission 2008.

Once flowers are removed from the plant they continue to grow slowly, but have a diminished capability of receiving the nutrients that are vital for their survival. In most countries, cut flowers are a local crop because of their perishable nature. In India, much of the product has a shelf life of only a day. Among these are marigold flowers for garlands and temples, which are typically harvested before dawn, and discarded after use the same day.

The majority of cut flowers can be expected to last several days with proper care. This generally requires standing them in water in shade. They can be treated in various ways to increase their life. According to James C. Schmidt, a horticulturist at the University of Illinois, originally putting cut flowers in a sterilized vase is important to extending the life of the flowers. Vases can be cleaned using a household dish detergent or a combination of water and bleach. Using these disinfectants ensures that there will be less bacteria growing within the vase that could potentially cause the plant to wilt and die at a faster rate. Schmidt also claims that cutting the flowers diagonally with a sharp knife under running water ensures that they can immediately take up fresh and clean water. Re-cutting the stems periodically will ensure that there is a fresh surface from which the stems can take up water. This will allow the flowers to last even longer. Other ways to care for vase flowers includes keeping flowers away from ceiling fans and air-conditioning vents as this can lead to dehydration, keeping flowers away from fresh fruit of vegetables, using filtered water rather than tap water so as to avoid both chlorine and fluoride, and keeping flowers away from your television.

Not the answer you're looking for? Browse other questions tagged flowers cuttings nutrients pollination wilt or ask your own question.

11
How are lilac cuttings taken?
5
How does Guano improve plant life?
7
How to grow pomegranate from cuttings?
11
Rotating indoor plants outdoors for pollination, fresh air, etc. How often?
2
What is the radius of wind pollination for sea buckthorn?
4
Can I save a male pumpkin flower for later pollination?
2
How long do tropical cuttings last?
4
Is it possible to preserve male squash flowers for pollination?
5
What is this small perfume-like flower and how can I grow cuttings?
1
How far apart can pollination partners be (fruit trees)?