Does anyone know what might be eating my new Rhododendron leaf? How concerned should I be?

After inquiring at a local nursery in the west of Ireland, I planted in a handful of Rhododendrons last year, to see how they might tolerate my soil. They seem to be thriving pretty well, But I noticed what look like bites taken out of some leaves. 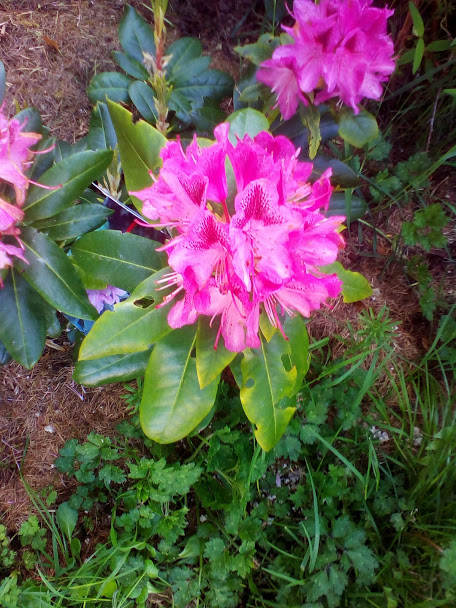 pests rhododendrons
share|improve this question
asked May 16 '18 at 19:15

Looks like vine weevil damage, judging by the notches at the leaf edges, but that's much more of a problem with plants in pots than in the ground usually. If the damage is on other plants too, you may need to use a nematode solution, but if it doesn't get worse, then you might not need to. Nematode solutions are temperature dependent so can only be used at certain times of year, and are watered on as a soil drench. I think the minimum temperature for use is 18 deg C, but that information is on the pack; Nemesys Vine Weevil killer is available via Amazon and other garden supplies retailers on line.

However, its hard to work out what your rhododendron is planted in - there appears to be quite a pile of something or other directly behind and around it (old grass clippings? mulch of some sort?). Whatever that is, it's way too high and looks as if its probably against the base of the plant, which it shouldn't be, so clear away whatever it is, it won't be helping, and keep the mainstem of the plant at the base clear of anything like that to prevent other problems arising. It's also possible some of the leaf damage is caused by slugs, all that material piled up will encourage those by creating a nice damp environment for them. A minimal, sparing sprinkle of rainproof slug pellets (Erazer are rainproof) on the soil once the excess material has been removed will take care of the slugs.

Not the answer you're looking for? Browse other questions tagged pests rhododendrons or ask your own question.

2
Chilli Plant Bugs/Brown-Purple Staining
6
How should I prune a damaged Rhododendron?
2
What might be eating my butter bibb lettuce plants?
3
How long will leafhoppers stay after grapes are removed?
3
Help identifying pest
5
What are these white with black caterpillars eating Petunias in Albuquerque, New Mexico?
3
What kind of infestation and/or fungus do I have in my vegetable garden?
3
Rhododendron in complete shade corner -should I move it?
3
What is this pest I found on my chilli pepper?