What's wrong with my tomatoes?

We've had tomatoes inside started for a while now. It's been almost a month since our last problem and now we're seeing this on some of the tomatoes: 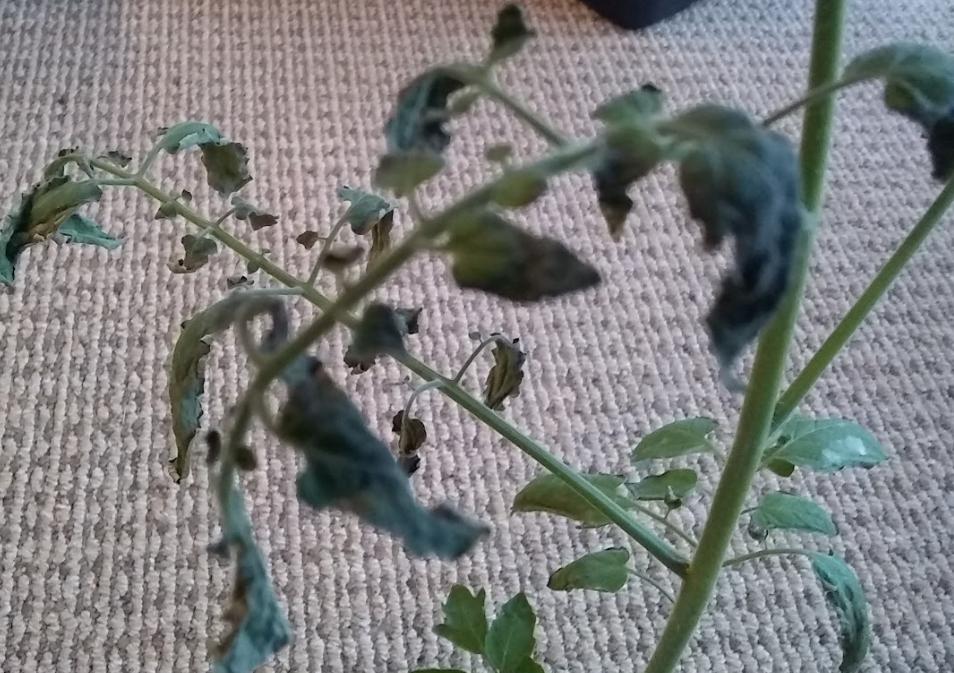 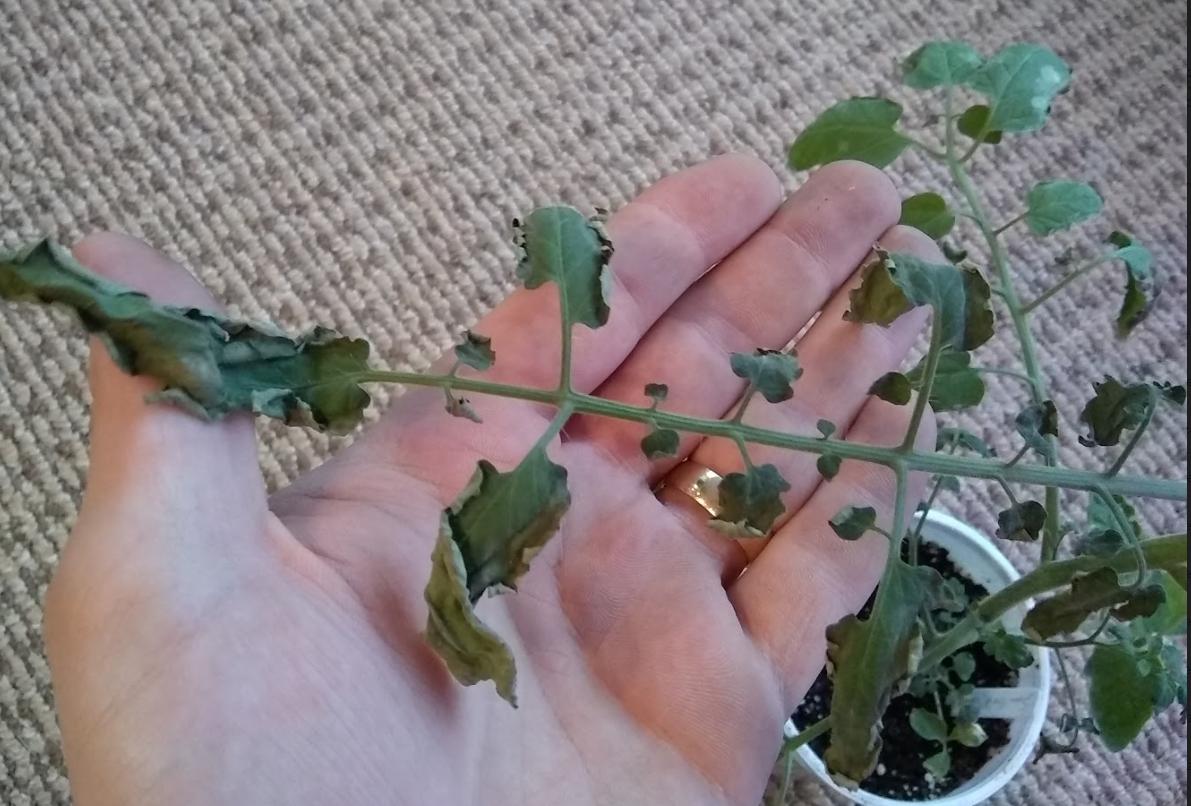 I know tomatoes look scraggly often but this seems really concerning. We've been using a fan on them recently.

Is this leaf roll? Do we just need to water them less? Is it possible our pots haven't been draining enough (we drilled holes in bottom of the yogurt container they are in)?

This looks at first sight 'freeze'...were these guys outside one night too long? Too close to glass french doors?

Next time this happens before you drag them indoors or before the sun comes up turn the sprinklers on. This SLOWS the thawing of plant cells so they don't burst, rupture and turn black. As much.

These tomatoes will not produce while indoors. Unless you had the proper artificial lighting necessary to allow the plant to make enough food so it could make seed and reproduce. You should try getting these plants used to the out of doors starting with 1/2 hour for a few days, and hour for another few days and so on. Then either planting them in the garden or transplant into a larger pot using only potting soil. If you've not used fertilizer, if your potting soil does not have added fertilizer you have to add a balanced fertilizer lower in nitrogen than the P and K percentages.

You need to transplant these plants into 2 gallon pots no larger using only potting soil from a bag. No added fertilizer, no added water holding gimmicks (sponges and gels), just plain old sterilized potting MEDIUM there is very little soil involved if at all. No rocks at the bottom beneath the soil and above the drain hole. Begin by taking them out of doors under a roof. No sun. Then acclimate to the sun before transplanting them into the garden proper or leaving them in the pots (minimum 5 gallon, 10 and 15 gallon pots are normal having up potted at least 4 times to the largest pot)...takes some work no doubt but this is easy once you understand the correct process and use just potting soil in the pots and moving plants from indoors to out of doors or from out of doors to indoors or any major change in the environment needs the human to take the time to acclimate the plant to the new space. One little freeze did what you've got going. Your tomatoes will come back but there is some pruning involved and acclimating to an environment where the plants are able to photosynthesize enough to make their own food and seed...lots of carbohydrates to MAKE by those little chlorophyll factories, gotta have the right amount of light and moving plants around is very risky unless you know how to acclimate or 'harden off' a plant to a new environment.

To take a plant that has grown indoors out of doors for one night or part of a night below 40 degrees F will cause this 'cell bursting'. Especially in the mornings just before the sun rises, the temperature drops precipitously and then the sun comes up and quickly raising the temperatures...which causes the plant cells to burst...and turn this black stuff.

If your plants have never been out of doors, near windows or in any situation where freezing was not an issue, I am totally wrong. And we need to go another direction.

One thing you could correct immediately - at the size your plants are, they should not still be trapped in yoghurt pots or anything as small as that. It's long past the time when they should have been transferred to 9 or 11 inch large pots with drainage holes. Whether they have another separate issue is hard to say given they're indoors all the time, but they certainly will have run out of root room. Use new, good quality potting soil to pot them up.

18
What's growing on my tomatoes?
6
How should I be fertilizing my container tomatoes?
4
Is it too late for this tomato?
5
What's wrong with my tomato plant?
6
Huge tomato plants, but fruits stalled
11
Plant recommendation for gift for kindergarten students
4
Tomatoes: what is causing leaf discoloration and brown spots on plant? Blight, fungus, or something else? (Pictures Included)
0
What's wrong with my tomato?