I was planning to prune the emerald green hedges on my driveway. I don’t know what they are exactly but looking on the internet, I think these are Emerald green (thuja). Although on the outside they look green, on the inside it has dead leaves. The green leaves are on the tip of the branches and are about 2-3 inches. What are some of the things I should do to take care of these? Can I prune them now about an inch? Should I clear all the dry leaves? 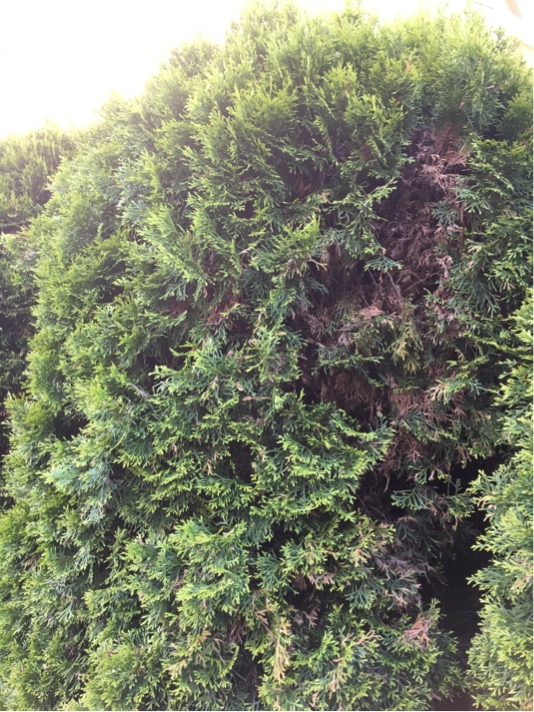 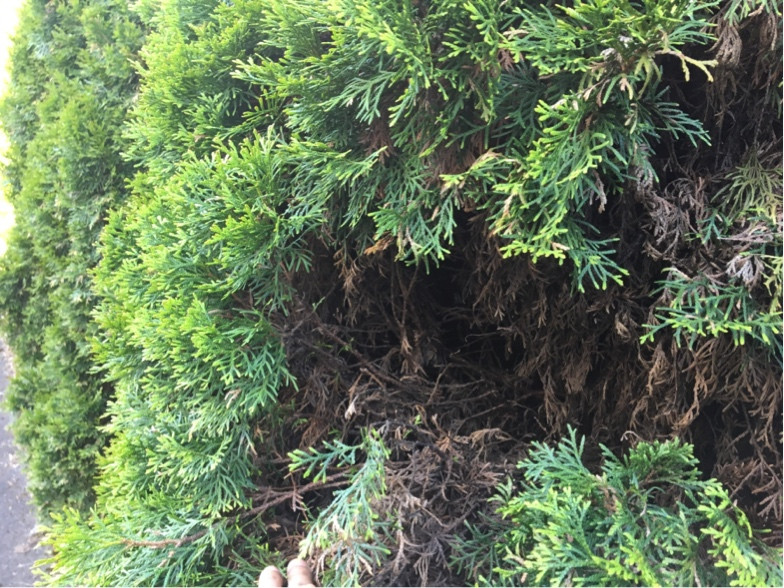 I have Emeralds myself, but these look a little too rounded on top to be Emeralds, unless someone topped them awhile ago. As to your questions:

Some people protect their arbor vitae from snow-load and winter sun scald ("burning") by wrapping them in burlap, but I don't. If you live in a cold-weather area, you can avoid burning by ensuring that your Thuja are well-watered going into winter and by watering them if there's a warm snap that melts the ice in the ground. More evergreens die from burning coming out of winter than from the winter, due to lack of moisture in the ground for them. I avoid snow-load by pruning the shrubs to a single leader.

Oh yeah - don't use ANY sidewalk or driveway salt anywhere near them. Thuja are definitely NOT salt tolerant.

One warning - I was once pruning sixteen 8-9 foot high Thuja that were in a block of four 20 gallon pots by four 20 gallon pots. The Thuja were blooming and as I worked inside that block of shrubs I kept disturbing the pollen, to the point where it was painting me tan. I then started having breathing difficulties, most likely because I'm allergic to Thuja and didn't know it. I had to leave the area ASAP and stay out of it in order to keep breathing. Additionally, some people are bothered by prolonged exposure to the leaves on their skin.

Not the answer you're looking for? Browse other questions tagged pruning hedge dryness or ask your own question.

2
Cutting height of Cedar Hedges
6
How much seasonal, internal die-off of Arborvitae is natural and expected?
3
Should I prune old dead sections of my rose bush while new growth is appearing at the base?
6
How to help our tall cedar hedge grow thicker?
2
Avocado from seed - to prune or not to prune?
4
Identify a shrub with pink new leaves and green older leaves
3
How can I prune a dead brown inside overgrown confider leylandii hedge
1
Pruning Coleus (and silly 15 character requirement)
1
How early should I start pruning Western Red Cedar planted as a hedge?
3
Are these Dracaena Spikes? Should I prune them more?