Thin Pachysandra = Volutella Blight? How can I fix these areas?

I live in zone 6a (Ohio) and just purchased my first house April 2017. We have had problems with the Pachysandra in the landscaping around the home. It seems to be thinned out and weak in some of the property.

I believe it's Volutella Blight. 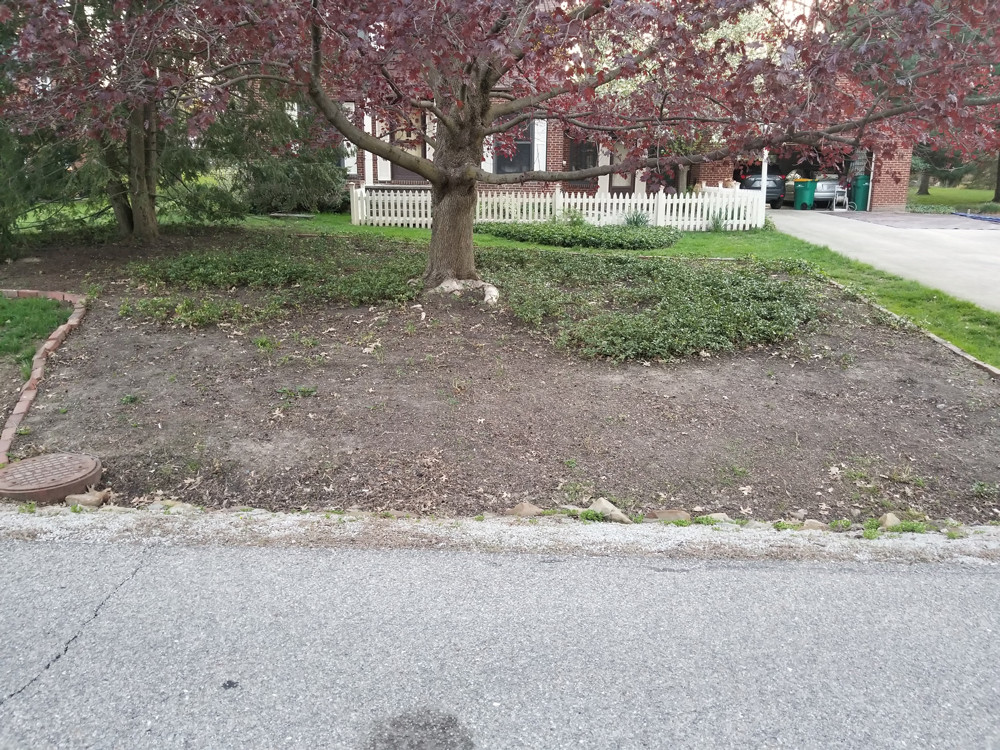 This area is going to be enclosed a lot closer to the thicker areas of Pachysandra and grass will be planted in the bare areas. You can see the thinness around the Maple tree. Last year I supplemented the front with a few inches of organic compost and fertilizer. We also transplanted a few stray Pachysandra plants from the back to the front. The transplants didn't do great and the area really hasn't improved overall. 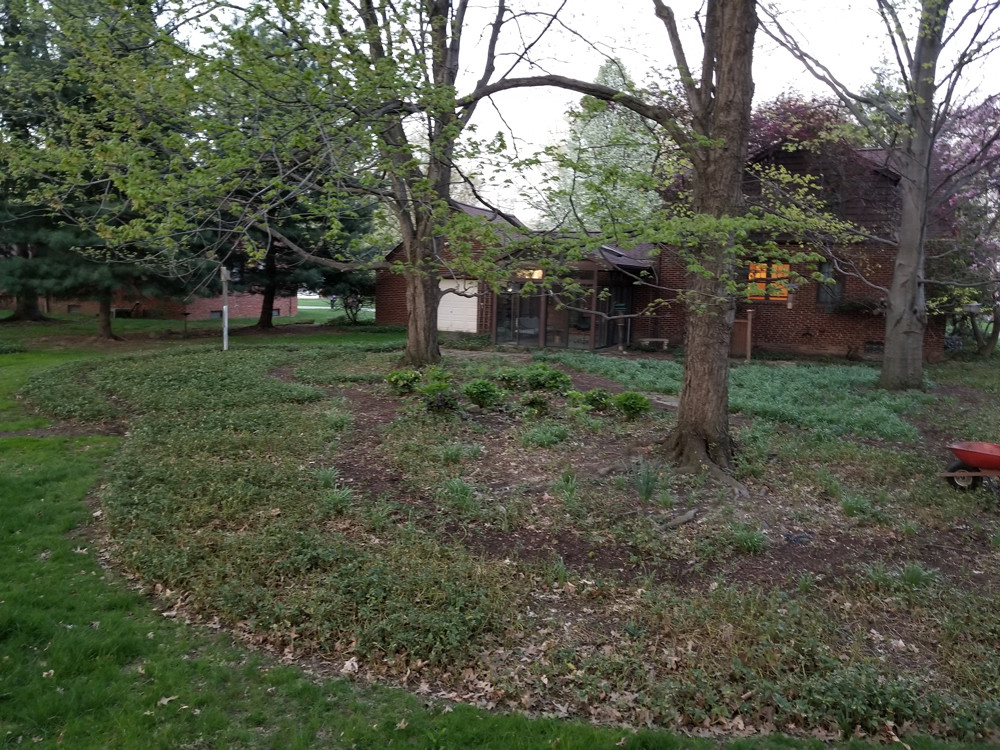 Aside from some tulips going stray, you can see the thin areas again.

Here's my theory as to why it's Volutella Blight. I read an article called Pachysandra in Peril about summer droughts in 2015/2016 causing strain on landscaping. I bought this house in 2017 from an elderly woman going to a nursing home, where her husband died 2 years prior. He was the one who meticulously took care of the yard according to my neighbors. It was apparent that the yard wasn't taken care of for a couple years because it was overgrown and we cleaned out about 70 yard bags of leaves when we moved in.

You can even see him working in the yard as the Google car goes by. I'm going to make the front yard look more like this photo.

I believe the Pachysandra wasn't watered during the 2 years of drought after he passed (2015/2016) and the maple soaked up all of the water and caused strain on the Pachysandra.

Area away from tree: 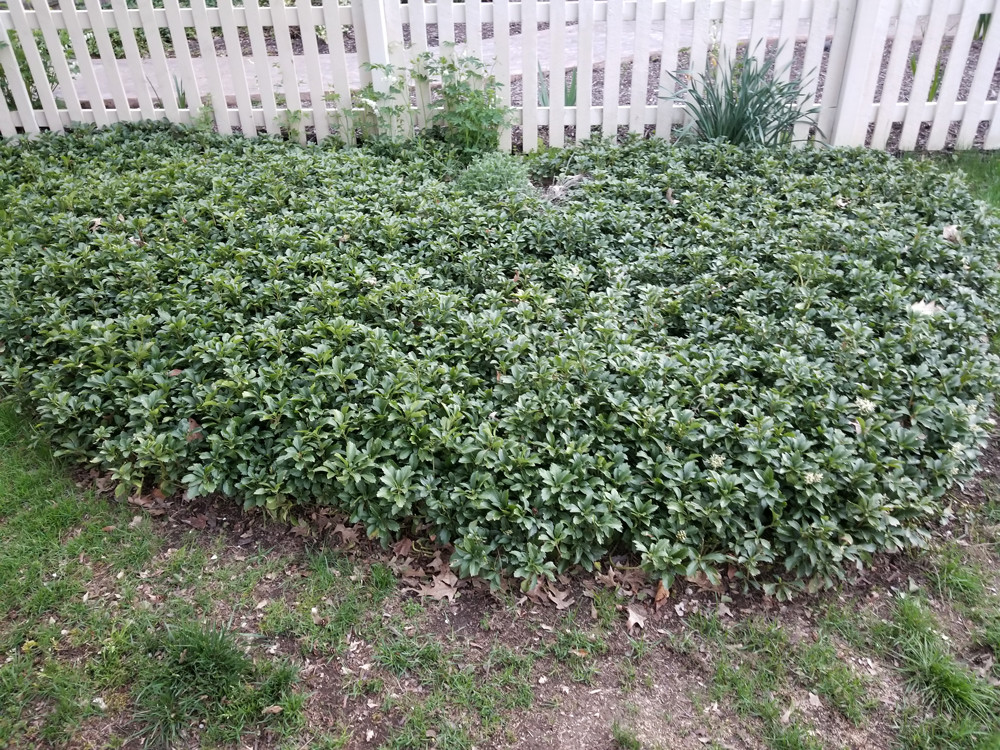 Here's a spot that's not around a tree. You can see that the Pachysandra is thick and looks great! I believe this is because it didn't have to compete with a tree for water. 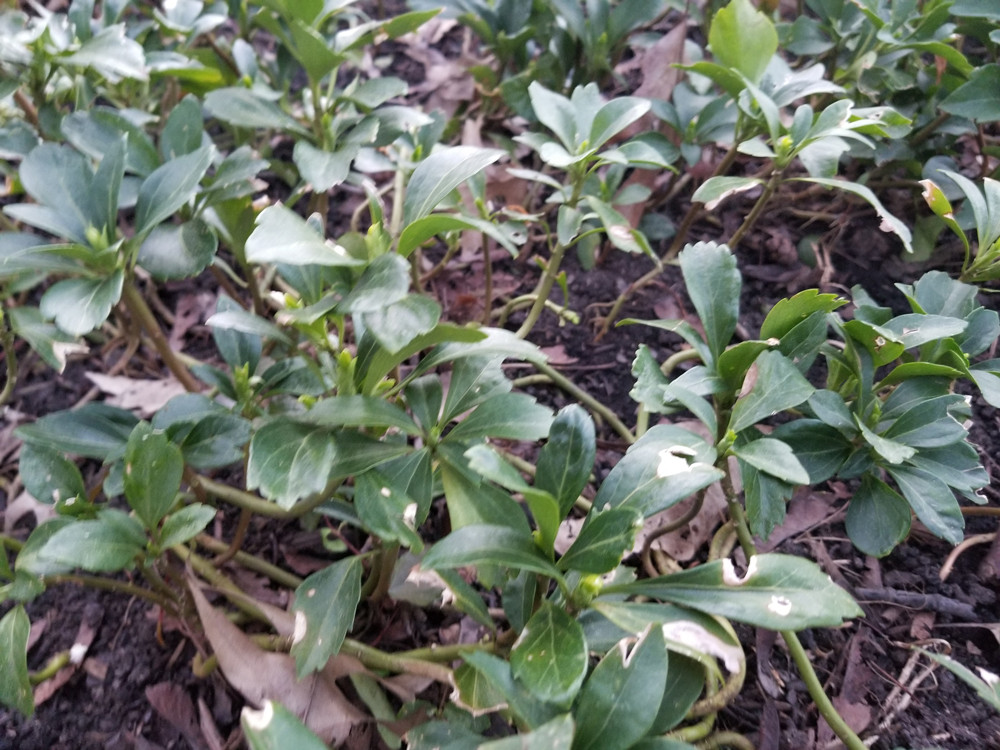 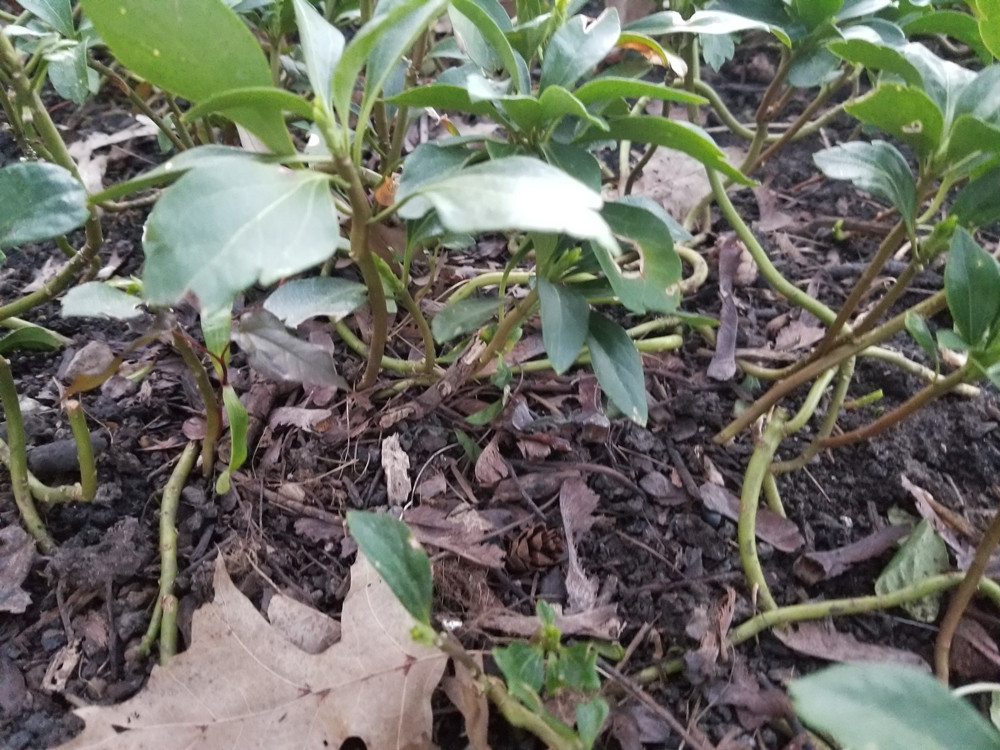 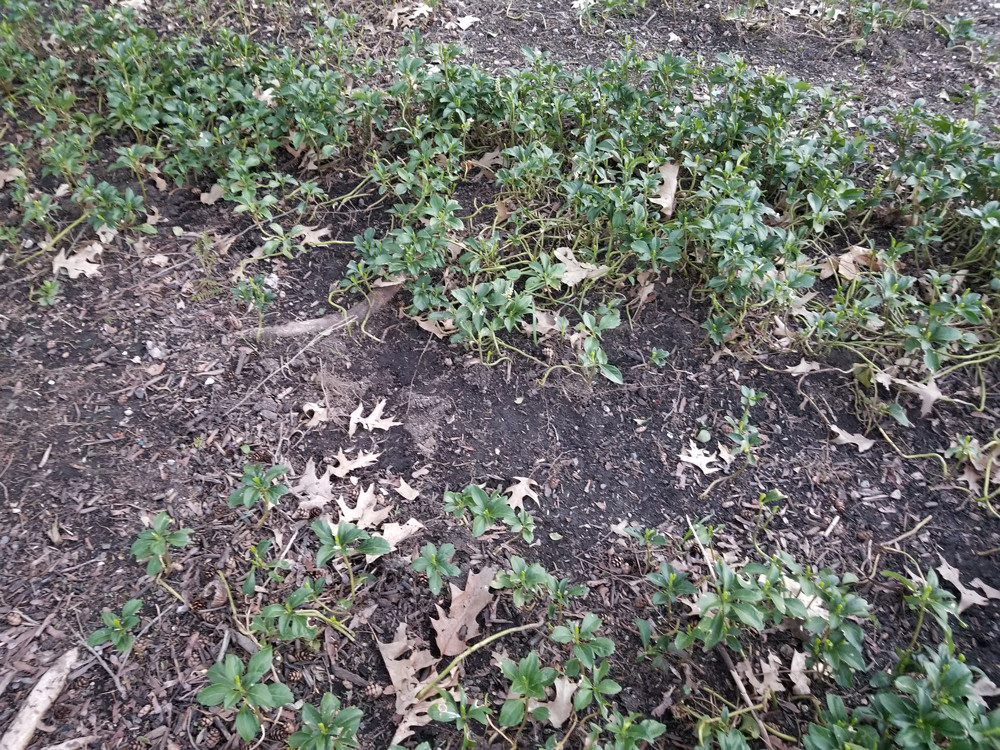 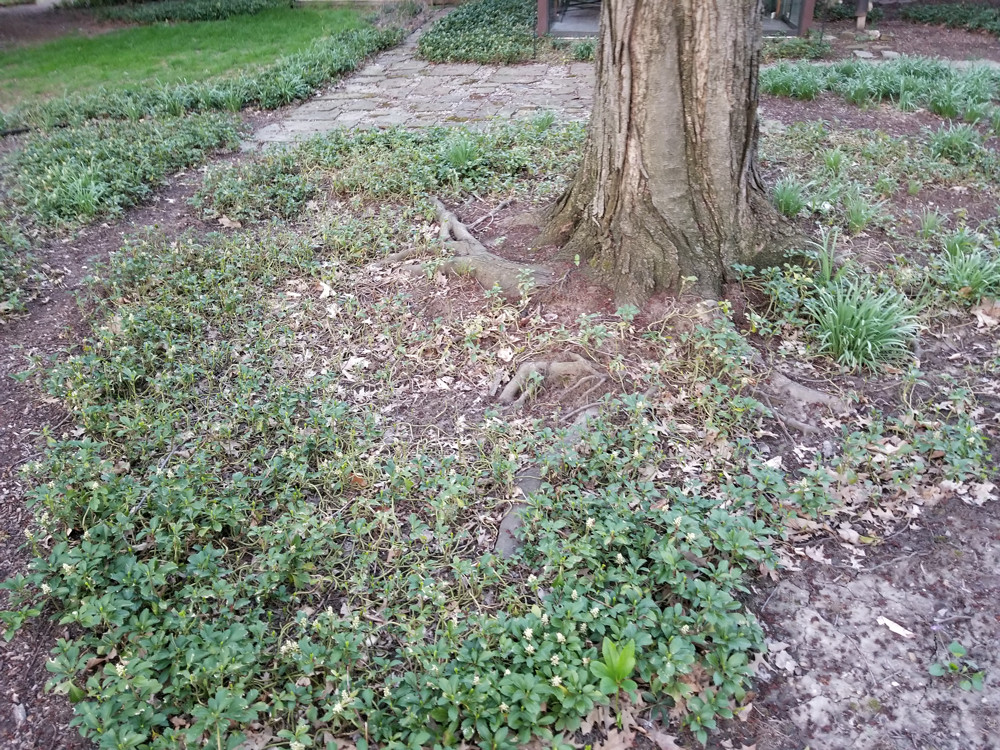 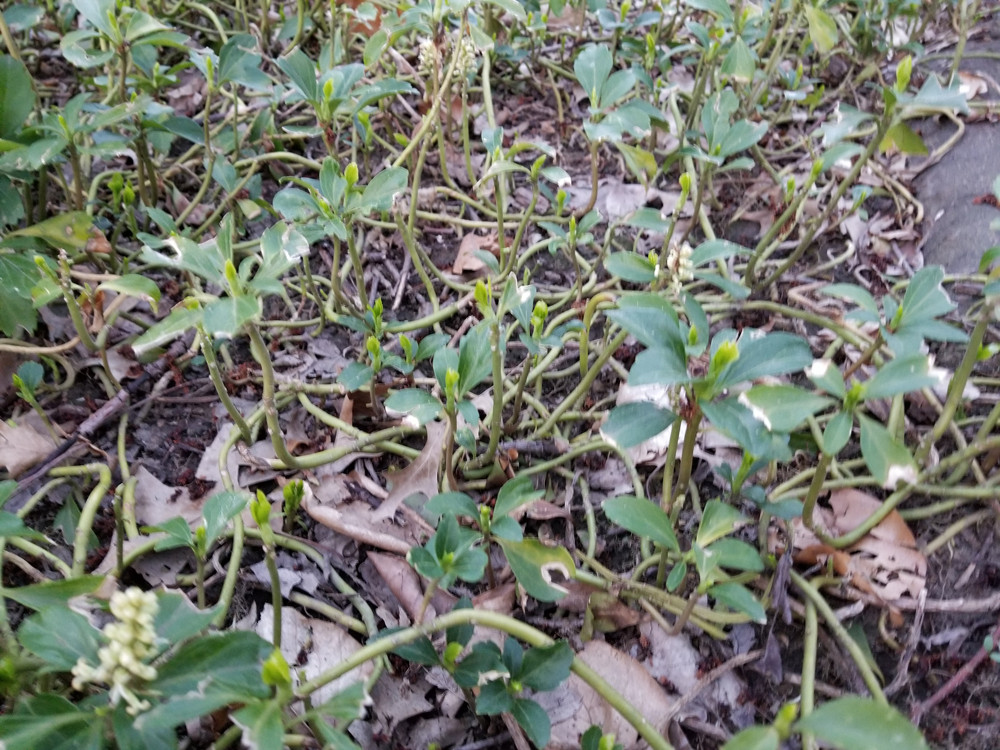 My plan so far:

I'm having Sweet Peet delivered today, where I plan to add a couple inches for better moisture retention. Additionally, I plan on watering the areas regularly with a soaker. Other than that, I'm not entirely sure what to do.

So do you think this is Volutella Blight? What can I do to restore these areas to their former glory?

If those are Norway Maple trees (front yard) - The roots are shallow & the shade is very deep. The conditions they create under the canopy is difficult, even for pachysandra. The trees in the back yard are also big and are probably sucking up all of the moisture. I think you are right - the Pachysandra needs regular watering and fertilizer.

Not the answer you're looking for? Browse other questions tagged diseases fungus ground-cover blight or ask your own question.

7
How do I control blight in lantanas?
7
Can someone help identify these two groundcover plants?
7
How can I control mint rust?
6
How far do potatoes really need to be from tomatoes to prevent disease/blight?
6
How can one prevent baby/recently sprouted plant disease?
6
How to start over-pachysandra decimated
5
Are these mushrooms poisonous and how can I get rid of them?
5
Can I use dawn liquid detergent in place of castile soap as a tomato blight remedy?