Is just adding a new soil layer on top of existing soil good for creating a new plant bed?

I want to create a small area (2 square meters) for new plants and/or seedlings. I need to raise a level in that area a little (for overall garden design purposes), and I plan just to put 30cm / 1ft high layer of mixture of soil and compost to that area. 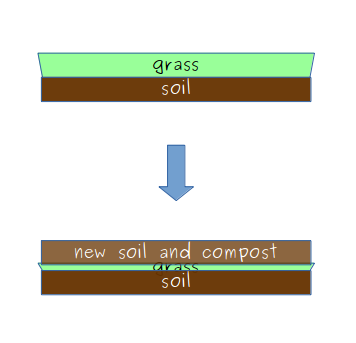 Is this plan good or bad? Do I miss something? Will the existing grass, and its roots, negatively impact new plants?

In theory if the grass died, it should become good humus. However, grass also has a wonderful way of growing through soil cover. It depends on the variety of grass, etc but I had this problem at a previous house. Built a raised bed of about 18in and the grass grew threw it. Same house but at the front, we put a xeriscape bed in. The cover was much shallower but we dug the grass out - the few remaining roots still grew back and plagued the bed until we moved out a year later.

About a month or so ago I built a new raised bed at a different house. 1ft deep. The location was almost bald, so I went over with a hoe removing the remnants of grass (the hoe was also used for leveling the edges as there was a slight slope). I have high hopes it will be okay, and so far so good.

Assuming you have good drainage in the old soil, give it a try. If it's flat clay soil underneath, not on a hill, you may not do much good because clay's grains are so small that water drains through exceedingly slowly, leaving your new soil wet. If you're on a grade at all, you should do well; and if on a grade but impatient, you could use a layer of vegetation-suppressing landscape fabric under your new soil and have a guaranteed result.... My sister the horticulturist tells me a foot of soil is enough for most any garden plant. Trees and shrubs often need more. of course.

Not the answer you're looking for? Browse other questions tagged soil compost planting sowing or ask your own question.

12
Good soil mix for bonsai?
17
Are all kinds of earthworms good for the soil?
6
What are good plants for sandy soil?
6
Should I wait for twigs in compost to fully decompose before adding it to the soil?
2
How close can I plant a new climbing rose to an existing mature plant?
4
What makes potting soil good for pots?
6
Is it possible to plant vegetables just in compost without soil added?
3
Using grass clippings for clearing the area of existing plants
4
For a newly built apartment, when and how do I start developing what's basically a building site into a healthy soil for a variety of plants?