I bought a new build in October 2016. When I moved in I noticed there were cracks between rows of turf.

With rain/bad weather it has just turned into a mud mess. It has been regularly maintained by factors.

I listed it as a "snag" as did all of my neighbours who are experiencing the same problem.

Having complained on several occasions I've now been told a "Clerk of Works" is coming to have a look on Thursday.

I'd appreciate any professional help/advice on this. Has it simply been laid badly? Should there be drainage given the considerable angle of the slope? 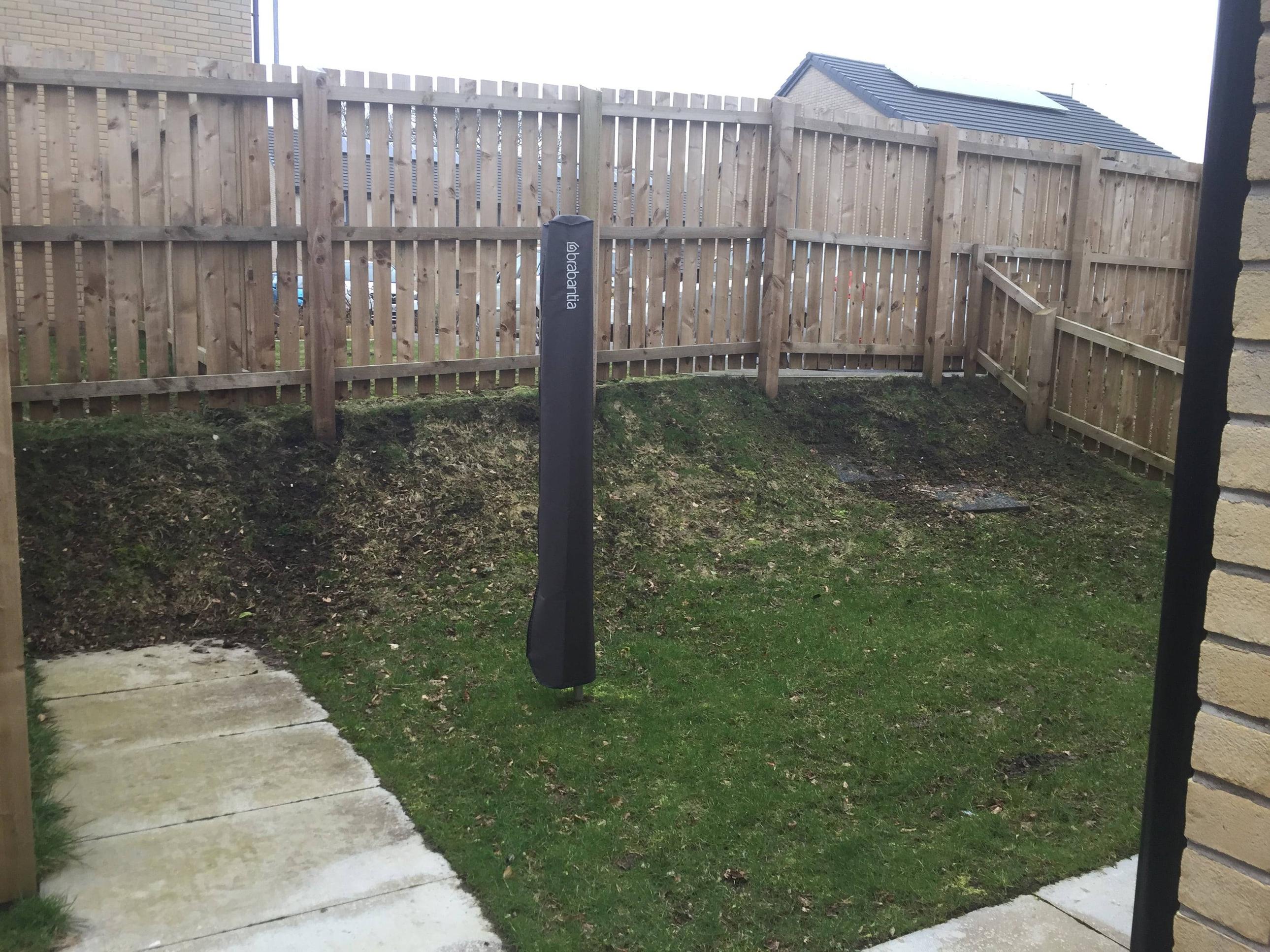 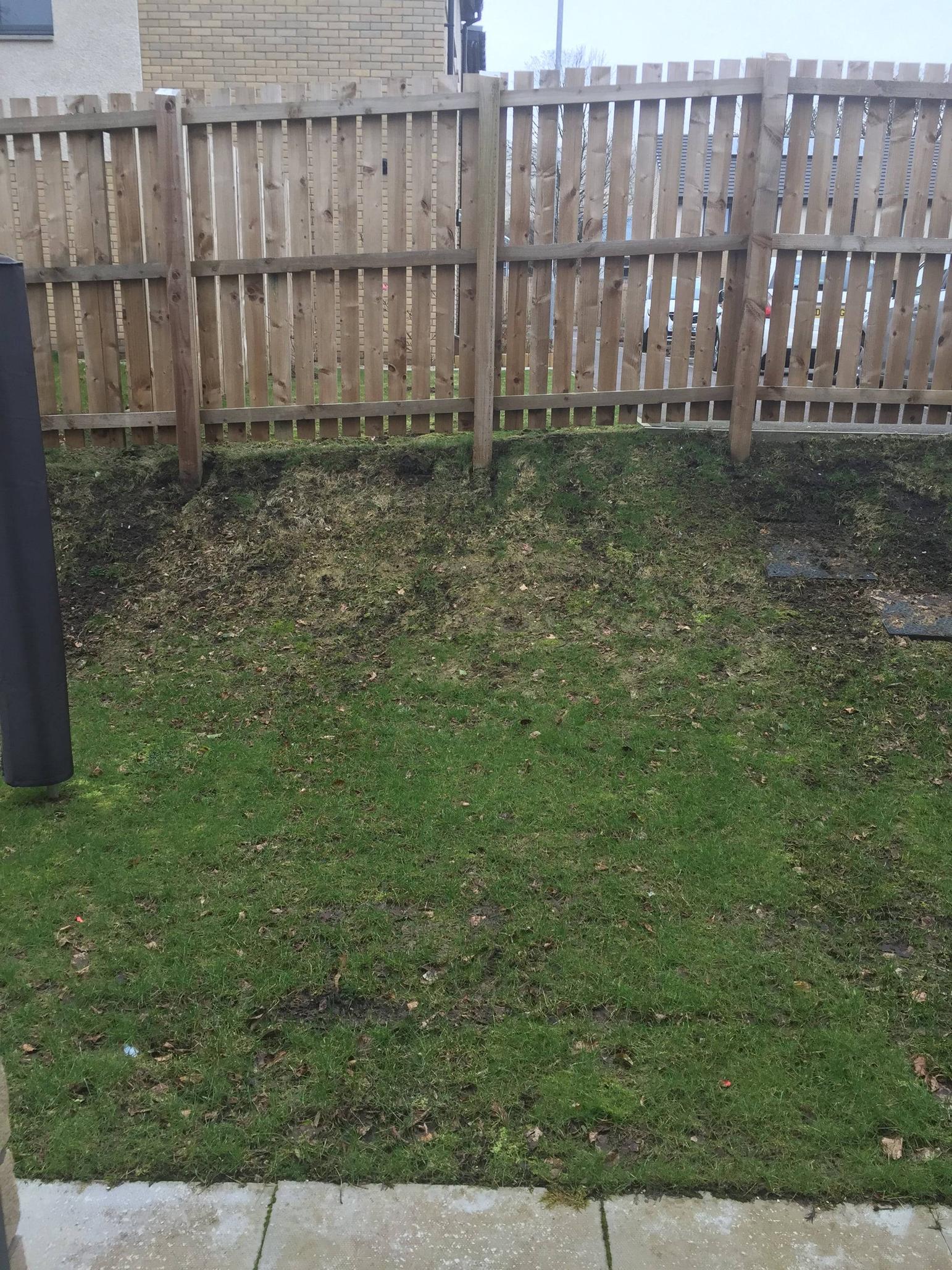 There should not have been gaps between the turves after they were laid - I can still see gaps between them in the photos even now. The trouble with new builds is, it's the builders who lay the turf, and they're not garden specialists - they're okay at building houses and fencing, but not turfing, so I'm afraid this sort of thing is fairly normal.

Otherwise, that is a very steep slope and there appears to be a parking area to the right behind your fence. It looks as if water has been pouring down the bank on your side which leads up to both the parking area and what looks like another grassed area. I cannot tell if there is a drainage gully of any sort at the edge of the parking area, I certainly can't see one. Regardless, it looks like water's been coming down from that other garden at a higher level anyway. I note you have two manhole covers, one of which is too close to the raised bank, which means there's a sharper angle on that part.

There's no easy solution - probably the best idea would be to remove the bank and brick up the drop,at an angle, right to the top level the other side of the fence, to support that area properly, and remove that slope your side, levelling off at the lower part to the level of your house. That, though, would not stop watering pouring over the edge, so some kind of gully or drainage at the bottom of the brick slope would be in order. Were it not for the presence of the manhole cover closest to the slope, a raised, brick supported planting bed to the height of the parking area would have worked, with weepholes in the mortar to allow excess water to drain. It would likely be pretty wet in winter though because of the run off from the higher areas.

Leaving the bank as it is and returfing is unlikely to resolve the issue because water will always run down it and wreck the turf. As for the rest of the turf, on the level part, it's just been badly laid - typical builder's turfing I'm afraid. Even if they get the builders to redo it, it might not be much better. As it is such a small area of grass, you might consider some other surface, such as permeable paving, or paving with areas left open for plants and to allow excess water to drain away, if the problem with the grass bank is resolved.

Not the answer you're looking for? Browse other questions tagged lawn-repair or ask your own question.

3
For a new lawn, are mixed soils worth it?
2
How to make garden flat and level
3
How to revive the grass of a small garden that is completely beige dry grass?
5
New turf left to grow too long - how best to fix?
5
What to do to the dry grass that is not allowing new grass to grow?
6
New construction with sloped subsoil yard, best way to go about growing grass?
4
Caring tips for a new lawn
1
Removing the sod and seeding new for an area 24'x48' (8mx16m) - advice needed
4
How to overseed new sod on clay?