I am hearing more and more lately that people should use some Epsom salt (magnesium sulphate) on their garden to help add nutrients to the garden. I am against this thought because in my mind that would dehydrate the plants, not help them. I would like to know if it really is any good, and why it would be good.

I have heard of the use of Epson (ed. Epsom) Salts as an amendment to garden soil but have no knowledge of whether this is successful.

So long as the application rate was suitable for the soil, then there is no physical or biological reason why Epson (ed. Epsom) Salts would not be a reasonable source of magnesium for garden soil and plants. It is just magnesium sulphate, the sulphate compound making it easily dissolved in water and accessible to plant metabolism.

My recommendation however is that you consider a more common and more cost effective alternative...

In horticulture, dolomite and dolomitic limestone are added to soils and soilless potting mixes as a pH buffer and as a biologically accessible source of magnesium.

In Australia, dolomite can be purchased from a range of outlets, but not always the “local hardware store”. The source will depend on the quantity required.

The following extract is from one of the most impressive books I have encountered, “Retrosuburbia” by David Holmgren, Melliodora Publishing, January 2018... “Chapter 16 Building and Maintaining Soil Fertility”.

“Articulated by American soil scientist William Albrecht in the 1930s, the mineral balance of soil fertility is now becoming accepted in conventional horticulture after decades of being dismissed as dubious organic theory.

Albrecht showed that it is the ratio of particular minerals in the soil rather than the absolute amounts of these minerals that leads to fertile soil. It is possible to have an abundance of minerals, but plant growth and health will suffer if these minerals do not occur in the optimum ratios.

For example, the calcium to magnesium ratio is particularly key to healthy, fertile soil. It should be at least 4:1 or, more precisely, 68% calcium base saturation and 12-14% magnesium base saturation of CEC (cation exchange capacity). This is the most powerful factor in transforming clay soils from ‘sticky when wet and hard when dry’ to crumbly and aerated when wet and soft crumbly and water absorbing when dry. The ratios of calcium to potassium and zinc to copper are examples of other critical soil mineral balances for optimum plant and animal health.”

This “Perfect Recipe For A Fertile Soil” from a diagram beneath the quoted text.

Fro those who are interested, Peter Bennett’s “Organic Gardening”, first published in 1981, contains a more detailed examination of soil chemistry and some very practical examples of how to achieve a chemically balanced fertile soil in the home environment.

I do know people who swear by epsom salts, usually for container plants, or because they've tried watering some round the base of a plant that's not responding to anything else. Nonetheless, it's not a miracle cure, and won't do anything at all for a plant if the problem it's having is nothing to do with magnesium shortage, so a soil test would be useful prior to use to see if phosphorus or magnesium are a problem. Information here https://www.gardenmyths.com/epsom-salt-for-plants/

I'd just add that epsom salts will not dehydrate plants either; as said before, the use of the term 'salts' in regard to the product does not mean salt as in table salt.

In my experience, most people will use Epsom salts for yellowing in containerised citrus plants which are prone to magnesium deficiency. However, this can occur in soil as well.

Magnesium deficiency has been a major problem in citrus production. In Florida, Mg deficiency is commonly referred to as “bronzing.” Trees with inadequate Mg may have no symptoms in the spring growth flush, but leaf symptoms develop as the leaves age and the fruit expand and mature in the summer and fall. Magnesium deficiency symptoms occur on mature leaves following the removal of Mg to satisfy fruit requirements

During the summer, when a rapid increase in fruit size occurs, the symptoms appear on leaves close to the developing fruit. Magnesium deficiency symptoms appear as a result of translocation of Mg from the leaves to the developing fruit, although there may also be a translocation from older leaves to young developing leaves on the same shoot. Disconnected yellow areas or irregular yellow blotches start near the base along the midribs of mature leaves close to fruit. These blotches become gradually larger and eventually coalesce to form a large area of yellow tissue on each side of the midrib. This yellow area enlarges until only the leaf tip and base are green, showing an inverted V-shaped area pointed on the midrib. In acute deficiency, the yellow area may gradually enlarge until the entire leaf becomes yellow or bronze in color. 1 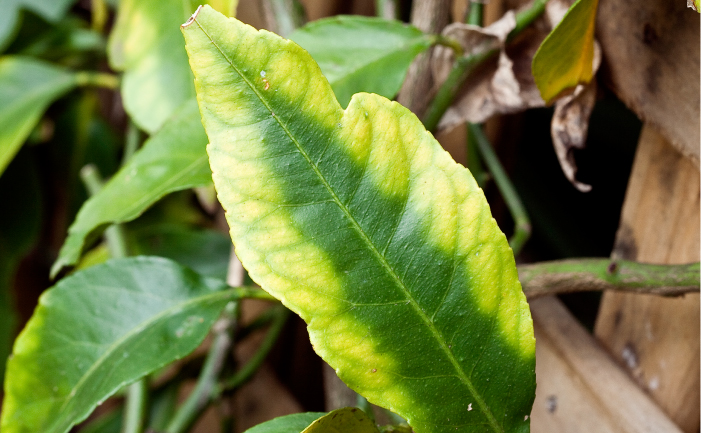 If your soil is clay based you want to avoid adding magnesium as that will make the clay tighter.

Not the answer you're looking for? Browse other questions tagged nutrients or ask your own question.

2
Organic method of helping a Manganese deficient lemon tree
9
What are the pros and cons of different rock dusts?
6
Can I ignore soil pH and just give blueberries chelated iron?
3
What is the correct ratios for Epsom Salt and Gypsum solutions?
7
Should I use epsom salt foliage spray on giant sunflowers?
4
Can apple scab be treated with comfrey or other biodynamic accumulators?
8
Developing new soil for gardening
4
how to increase Phosphorous, Potassium and Calcium in lawn soil
1
Hydroponic feeding times and scheduals
2
3 Mango Trees (6 months old); Grayish-Orange Spots heavily progressed; Blackening/brown curling leaf tips; 1 Mango Plant losing all its leaves!