For several years I have enjoyed the olives of a type of tree from Peru called a Botija olive tree. The olives are cured only by drying them, which seems to remove almost all the bitterness. They are marketed in small bottles or bags by several companies in the United States such as this one. I enjoy the olives enough that I would eat them every day if I could afford to. I tried drying olives local to Sacramento, California where I live but with inferior results. Although a food dehydrator or oven (as described here or here) effectively removes the bitterness, the bulk, texture and flavor of the Botija are hard to reproduce. I would like to grow one of these trees if I could obtain one. For a year I tried to sprout the pits until I learned that it would take 30 years for a seed-grown tree to bear fruit. So far, efforts to correspond with the farm or its distributor haven't elicited a reply. One article suggests that these olives are also known as "sevillana" olives and are commonly marketed throughout Peru. If this is the same as a Sevillano olive tree then I can buy it. But another article lists Botija and Sevillano as separate varieties. Can anyone help me obtain information that might lead to its capture, such as other names that the Botija olive goes by or where else it is grown? Thanks for your interest and help.

Edit: Another article I found describes the Alfonso olive, which the comment by "refreyre" claims is the same as the Botija olive.

Edit 5/4/18: I found a few brands of Peruvian Botija or Alphonso olives at a local international market. 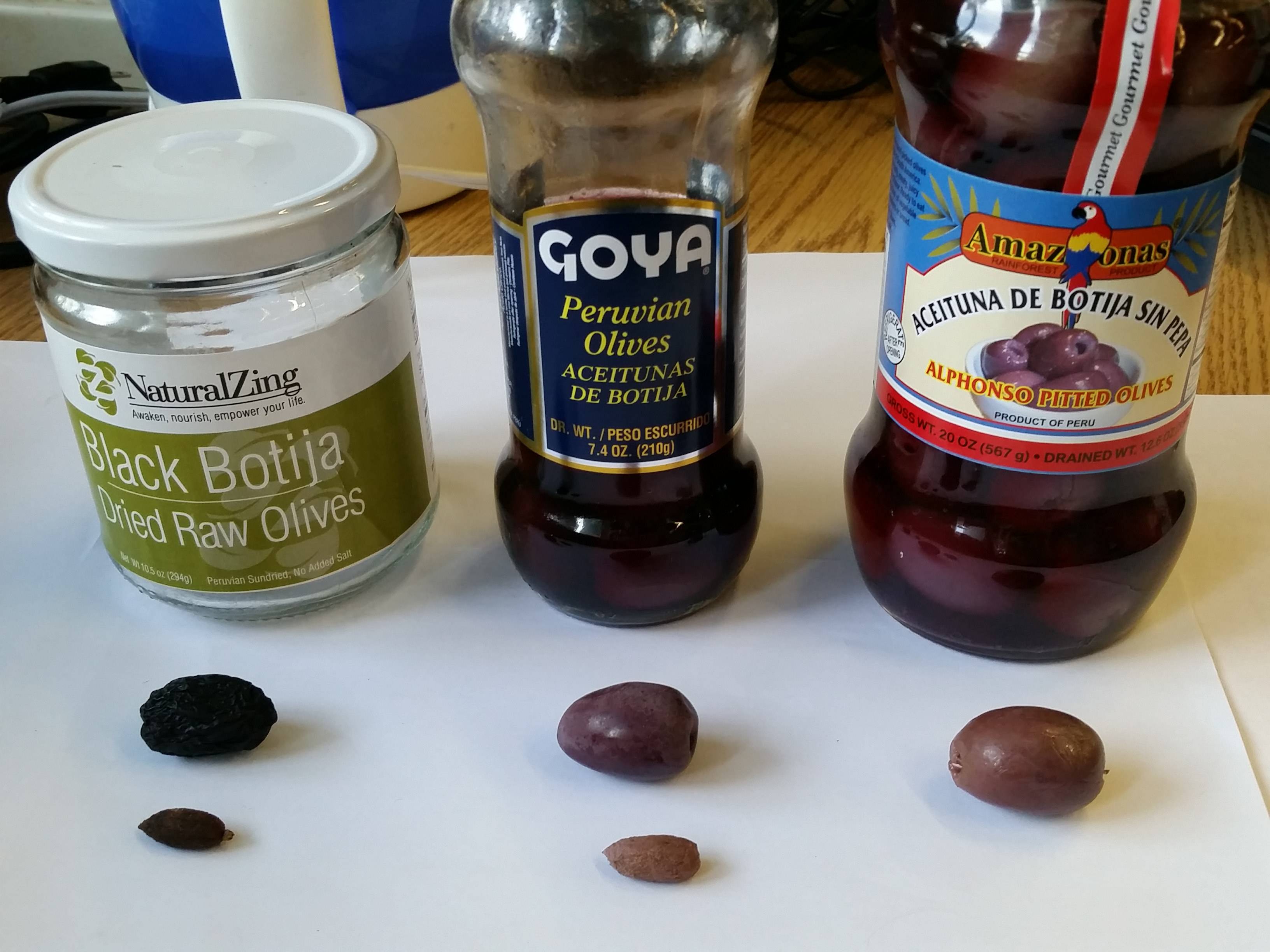 One jar says "GOYA Peruvian Olives - ACEITUNAS DE BOTIJA" and the other "Amazonas ACEITUNA DE BOTIJA SIN PEPA - ALPHONSO PITTED OLIVES". The two brands of salt-cured olives seem to be the same variety, and the pit looks similar to that of a dried Botija olive. Based on my experience drying other varieties of olive I would have expected the dried olives to be significantly smaller than the brine cured ones, but these don't seem to be.

I love growing and eating olives so your question has caught my attention and sparked my interest.

I have done some research and so far, I can present the following although this is not an answer (yet).

Peru is a multilingual nation with many aboriginal languages, however Its official language is Spanish.

Botija translated from Spanish to English means box or canister.

Botijo - also called búcaro in Spanish, is a traditional Spanish porous clay container designed to contain water and has the property that once filled, it cools the water that it contains, acting as an evaporative cooler.

Searching more for the history of the olive in Peru, I found these websites...

Parque El Olivar, in the San Isidro district of the nation’s capital Lima, dates from 1560 when Antonio de Rivera brought the first olive plants from Sevilla, Spain and while only three of these plants survived their arduous Atlantic journey, they were duly planted and thrived.

Peruvians call them aceitunas de botija for the clay jars (botijas) in which they were stored when olive-growing and curing began in Peru in the 16th century.

It could be that, as you hint at in your question, the “Botija” olive is simply a colloquial term for the olives that have naturalised since their introduction by the Spanish in 1560.

Perhaps these clues might help track down a tree from an olive nursery in the USA?

However similar to you, I cannot find a nursery that grows “Botija“ olive trees in Australia, or for that matter anywhere else in the world.

Based on your example from “Essential Living Foods”, I found this pleasant article that includes details of the farm that supplies the olives...

After a little more research I have found a website for the permaculture farm based in Peru...

They have their own brand “Oliveco Organic” that they appear to market locally.

The website includes contact details. I’ve sent an email requesting whether they have nursery stock and whether they would be prepared to export to Australia. I’ll let you know whether I receive a response. If they do you may be able to import some of their stock into USA.

As an aside, I note that Australia has very strict quarantine laws so the cost to import any nursery stock will include time in our national quarantine station to ensure no pests and diseases are hitching a ride. You’ll need to check the relevant quarantine laws for California and the USA.

From my research to date, I can only conclude that Sevillana olives are a distinct Spanish variety that are widely grown and often are included in orchards with Manzanillo trees to increase yield. The Olives Australia website includes information on the Sevillana olive and states...

Fruit is generally oval in shape with an indent at the stem which can give it an almost heart-shaped appearance. The skin is thin and speckled with white markings. The flesh is light green turning purplish-black when ripe and of good texture for pickling.

It could be that the Botija olives are descendants of that variety?

This is what I found of the tree Wish you luck 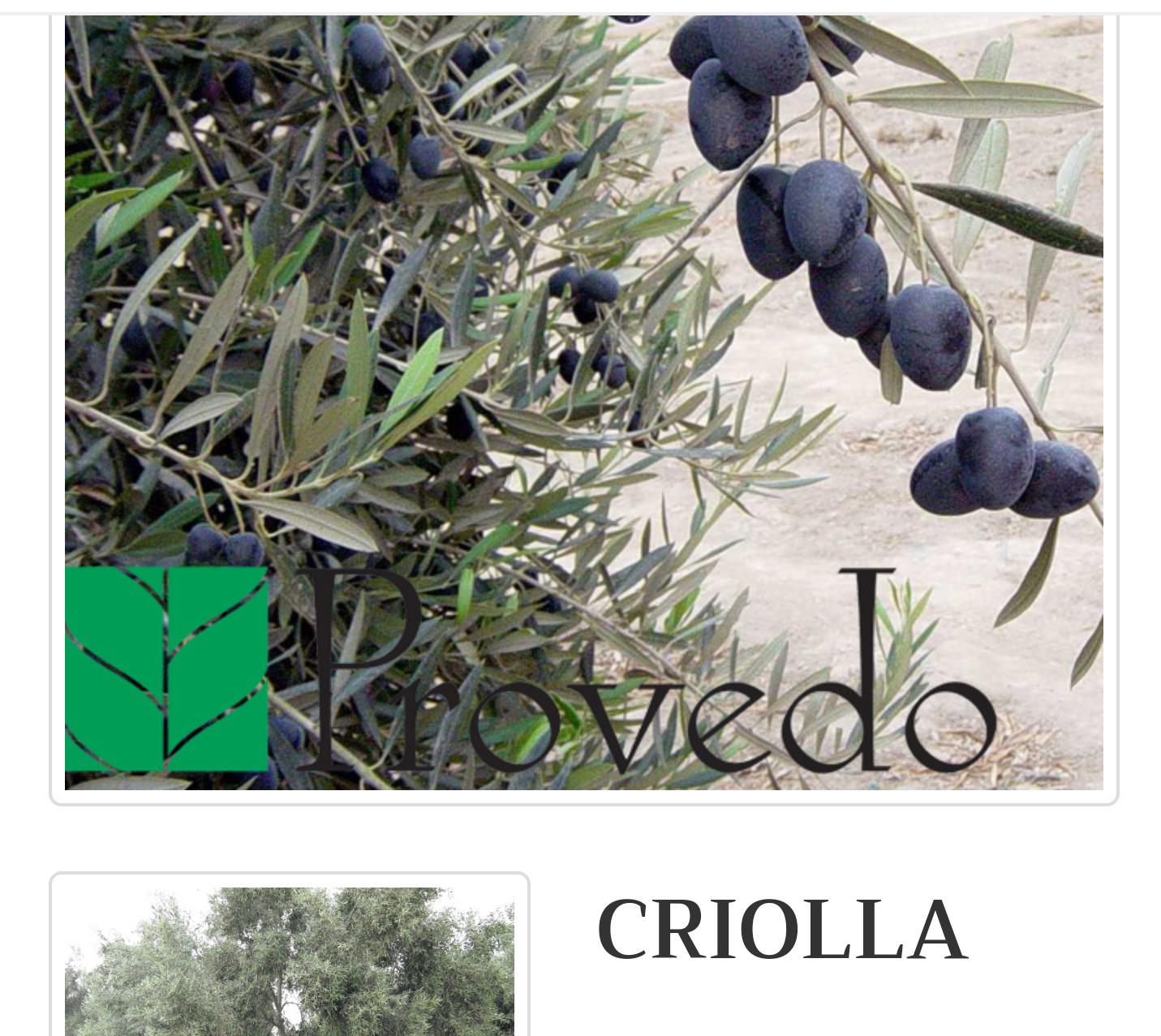 Name of the tree is Criolla From Peru

Not the answer you're looking for? Browse other questions tagged variety-selection terminology olive or ask your own question.