My recently lush windowsill sweet basil has gotten very leggy after having been stressed by underwatering for at least several days (might have been as many as 10). While it was not dead when I got home, it was quite wilted and subsequently most of the old growth leaves were lost. It had begun flowering but never reached the "bolting" stage. Many of the stems are now woody near the base.

By careful but aggressive pinching, pruning and frequent watering, I was able to restore some life to the plant, but it is still a skeletal shadow of its former self. There has been substantial branching and new growth, but it has been producing only small leaves. Am I over- or under- fertilizing? Any chance it will come back or has it reached the end of its life cycle? 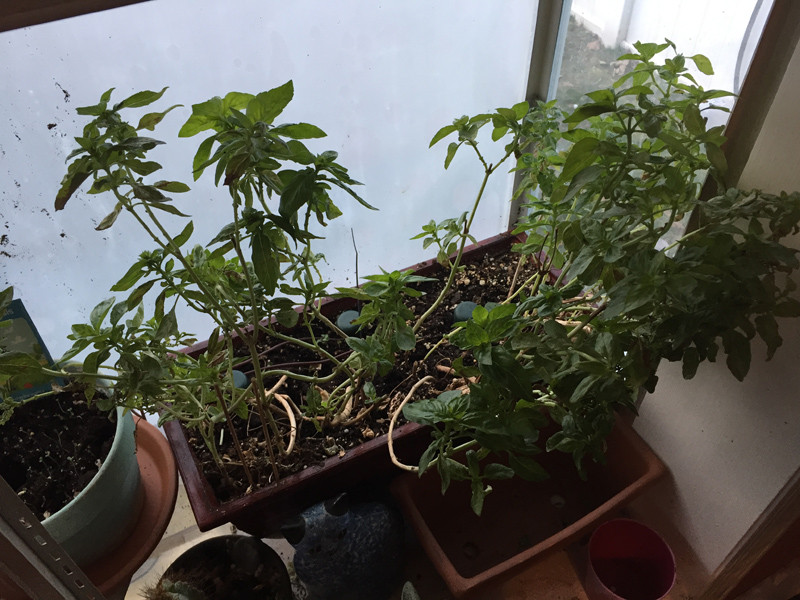 The plants have been in this 18"L x 9"W x 9"D container about 8 months, transplanted from a grocery store purchased pot late last summer. Over the first 6 months, I pinched off top leaves regularly for light culinary use and harvested larger amounts from the top every few weeks for pesto.

The container sits in a south facing "greenhouse window" and gets 6-10 hours of good sunlight, depending on the season. The drying out/die-off happened in late January (it is now March). The room has good air circulation and is a pretty steady 70F.

The soil is Miracle Gro general purpose potting soil. After the plants dried out, I added a few pellets of Miracle Gro Shake and Feed fertilizer and watered heavily. About a month later (a week ago), I added a small amount (a cup or less) of doubly diluted liquid organic fertilizer.

The container has always been very thirsty and needed to be watered at least twice a week. I recently started using Hydrospike type automatic waterers with seeming great success to maintain a steady moisture level.

Unless grown in the mediterranean regions basil acts as an annual plant and dies after a year. You can try and keep it alive by moving it inside in the winter but temperatures and lighting levels inside just don't meet its requirements for growth so it will suffer. And if it has already tried to form flowers and seeds it won't really return to vegetative growth where you can again harvest lots of leaves.

Just get a few seeds and start again for the next season. It's easy to grow from seed.

Not the answer you're looking for? Browse other questions tagged containers fertilizer herbs basil lifespan or ask your own question.

9
How do you transition a guava from a yard in Florida to a pot in Boston?
9
Can I salvage an over-watered tomato plant?
12
Will my basil plant regrow without leaves?
2
Organic or Traditional lawn fertilizer: which is safer for areas with young children?
4
Why are my morning glories stunted/deformed?
4
This basil plant has strange spots (almost shiny?) and I can't figure them out
3
Basil plants turned completely woody and brown
1
Adding 10 cm of cow manure to my orchard in summer without hurting trees
1
What's wrong with this basil plant's leaves?