Rosemary plant died but I see new sprouts, should I move them?

So few months ago I bought a rosemary plant from Lowe's and being in Austin, it's usually been warm winters past few years. With frost and moving it in and out often on my balcony, it slowly turned brown and leaves all fell off but I kept watering it now and then in hopes of seeing new leaves.. That didn't happen but I was going to clean out the pot today and noticed a couple of new little sprouts popping through under the roots. I don't remember seeing any flowers form while it was nice and bushy. Should leave it alone and let it sprout organically or do I clip the naked branches off the bush or would that shock it? 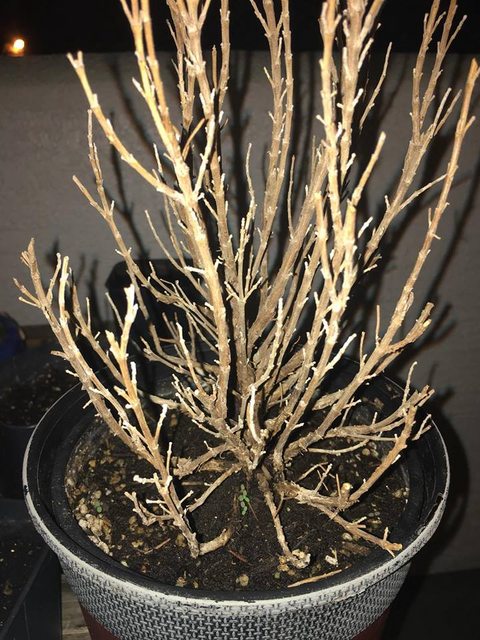 Here's a close up of some sprouts that are growing: 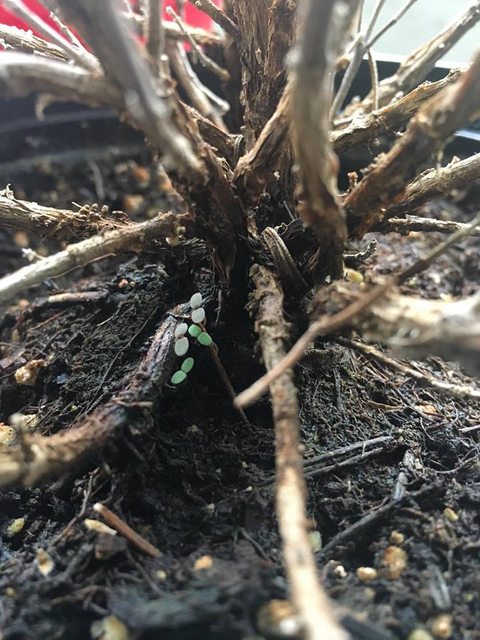 transplanting rosemary
Share
Improve this question
edited May 11 '18 at 17:20

I think what you are seeing are random weeds that are sprouting in your pot from air blown seeds.

I agree those new plants don't look like rosemary. Could leave them for a little and see what happens or prune them out, but if you leave them don't wait too long or their roots may get tangled with the rosemary's.

For your rosemary plant I had a similar situation and in my case it was primarily lack of light. Over-watering is also a common problem with indoor plants as people often see plants struggling and try to give it more water to help, but if the soil is never able to try the roots will basically drown and it's very difficult for plants to recover from. Better to let soil get dry on the top 1/2 inch even if the plant looks sad, as they can recover easier from a brief drought than flooding.

Since the main issue with our plant was light, we moved it to a brighter spot. Still no effect. Eventually, after months of our rosemary looking much like yours, we setup grow lights for leafy greens and seedlings. We put the rosemary under these grow lights and pruned its branches back hard as per advice we got from a farmer friend with an exceptional green thumb. We pretty much lopped all the dead, dried branches off so that there was just a 1-2inch stump coming out of the soil. The idea is, even if the plant has ceased to grow, there may be some life left in the roots if they are given another chance. We watered it conservatively and after a few weeks under the brighter light and pruned conditions, it started sprouting! Months later it is still growing and recovering, though most new growth is only on one side for whatever reason.

In summary I recommend the following for that plant:

Those do look like rosemary sprouts to me. The same thing has happened to my rosemary plant that I bought for a Holiday centerpiece. It wasn't getting enough light I suppose and turned brown. When I realized, I took it outside to live on the front porch where there is more light, in hopes it would recover. The main plant still looks brown, but today I noticed tiny sprouts in the pot. I looked up rosemary sprouts and I'm pretty sure that's what we both have. Meaning the roots are alive and sprouting, or it seeded itself.

All these advice is good however it is useless if your plant is dead.

What to do is with your nail or a sharp knife, scratch the epidermis(the bark) at the base of the plant on several shoots. If they are green underneath, it’s alive... otherwise, compost heap.

I doubt it’s alive. If you get a new one, think of where the plant is naturally found. Mediterranean climate, hot dry and sandy soil. These conditions should be matched for your plant. The only ‘feed’ I would give would be a mulch after yearly pruning. Rosemary leaves are built to trapped humidity. That’s how they get water. Too much watering has rotted the roots

Not the answer you're looking for? Browse other questions tagged transplanting rosemary or ask your own question.

1
Rosemary plant turned brown
2
Cut-off cactus piece not showing signs of new roots, should I plant it in the ground anyway?