What is this houseplant with oval, shiny, dark green leaves, and how can I care for it?

I got this plant from a yard sale, and have had it for six months. It has many shiny dark green, healthy leaves. New stalks are growing but their leaves are turning yellow and they're dying. What plant is this and what are your suggestions on how to care for it? 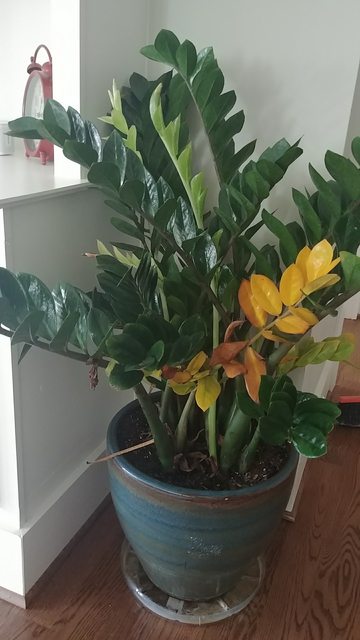 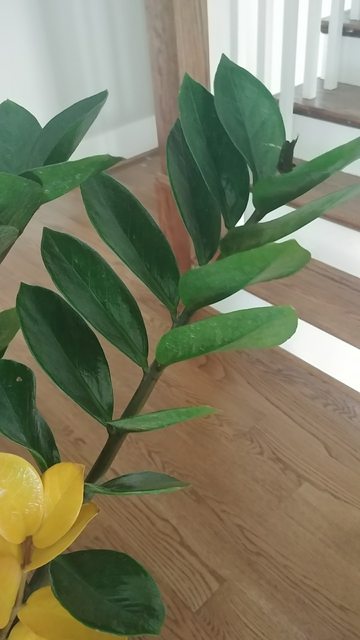 This is what's commonly known as the ZZ plant - its full name is Zamioculcas zamiifolia. It may be yours has been overwatered, that's the usual cause of yellowing leaves and stems, although it looks possible it might need a slightly larger pot. The plant tolerates low and bright light conditions, but does not appreciate direct sunlight - how much light it receives, to some extent, also dictates how much water it needs. Water when the surface of the potting soil feels just about dry to the touch, water thoroughly, and tip away any excess from that outer tray after 30 minutes. More care information here.

UPDATE: Now the photo's the right way up, I would strongly recommend you find a larger pot, next size up, with drainage holes - it definitely looks like it needs more root room. Although the pot its in currently isn't tiny, it is quite narrow at the bottom, which reduces the space available for roots.

In Australia we know Zamioculcas zamiifolia by the common name ‘Zanzibar Gem’. It is known by a few other names in different parts of the world.

It is a tropical perennial plant native to Eastern Africa. Leaves grow from a stout underground, succulent rhizome. It is normally evergreen, but becomes deciduous during drought, surviving drought due to the large potato-like rhizome that stores water until rainfall resumes.

Zamioculcas zamiifolia contains an unusually high water contents of leaves and petioles and is reported to survive extremely well under interior low light levels for four months without water. Optimum growth is achieved between temperatures 18 °C to 26 °C (65° to 79 °F).

Due to these traits, the plant is used extensively as a decorative plant within commercial office buildings across Australia. This is not only because it tolerates and in fact prefers extended dry periods, bright but indirect light and warmer temperatures, but also because it is scientifically proven to purify the air by absorbing volatile organic compounds (VOCs).

The state of your potting mix may be an issue, as the plant requires very good drainage. Most cultural notes indicate that the soil must be allowed to completely dry out between watering. This dry and wet cycle cultivation requires a potting mix that will maintain water retention capabilities after watering, without collapsing during dry periods.

It is also worth noting the plant is a part of the Araceae family, that includes philodendron species. All my aroids grow best in a free draining mix very similar to orchid potting mix, however I always include more chunky coir (coconut fibre) for its water retention capability. This type of potting mix will also survive the wet then dry cycle of cultivation necessary for this plant to be healthy.

Finally I finish with the colour of the leaves... Firstly I note that all my aroids have very bright light coloured new leaves. If you are certain that the yellow leaves are new leaves, then allow them some time to “mature”. It may be that the low light levels that your plant is exposed to translates to a very light coloured new leaf. It is also worth noting that plants do occasionally lose older leaves and with Zanzibar Gem as with many other plants, these old leaves turn yellow before they “die” as the plant withdraws the chlorophyll. If these are older leaves, then in time they will dry and “brown off”. This is not a concern as it is a part of the plant growth cycle. The majority of leaves on your plant look very healthy and a few old leaves dying is nothing to be concerned about.

Trust this helps. If you’ve any questions, please leave a comment and I’ll update my answer.

Not the answer you're looking for? Browse other questions tagged identification houseplants plant-care or ask your own question.