What is it best way of starting Eryngium giganteum umbelliferae from seed?

I was attracted to the wild, fantastic forms of Eryngium giganteum umbelliferae (also known as Miss Willmott's ghost), so I ordered a pack of seeds from a local seed shop: 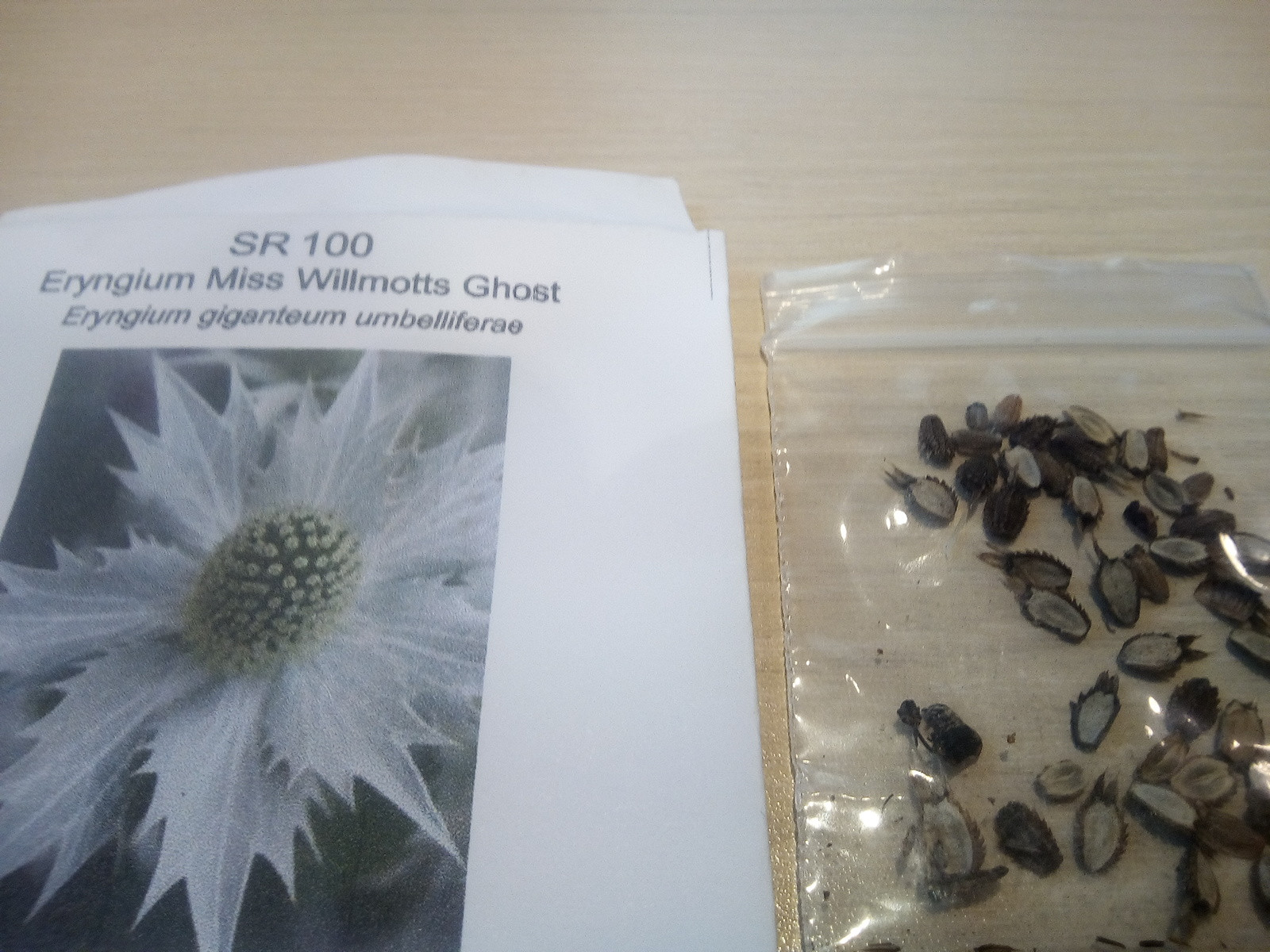 I also received the instructions for starting them, that say, among other things:

To improve germination rate, after placing the seed in the soil, cover the container with glass, and keep it outside for 2-3 week in the cold. Then move it indoors to a room with temperature 15 degree C.

It just sounds too complected for a beginner like myself!

I searched the internet, and I got even worse suggestions - some of them said that it may take a year for this plant to germinate in a container. This was so depressing.

This actually stands in a stark contrast to the stories that are told about this plant:

This species is sometimes commonly called Miss Willmott’s Ghost in reference to Ellen Willmott (1858-1934), English gardener in Essex, who so loved this plant with its silvery ghost-like appearance that she reportedly scattered its seed on a regular basis in gardens she visited without telling the owners.

This plant was named after Ellen Willmott, an eccentric English gardener who loved it so much that she secretly dropped seeds in the gardens she visited without telling anyone and the plants would mysteriously appear later.

Should I just give up starting from containers, and scatter the seeds just like Miss Willmott (but in my own yard)?

My hardness zone is 8a.

They are telling you you need to cold stratify the seeds before they germinate. What are your current climatic conditions?

Surface sow onto moist well-drained seed compost. Just cover with potting mix. Propagate 18-22°C. for 2-4 weeks. Do not exclude light. Germination can be slow. Seal seed container in a polythene bag and leave for 2 further weeks, then cold stratify. Move to a fridge 4°C for 3-6 weeks. After this return to warmth but no more than 18°C. If germination does not occur within 6-10 weeks return to fridge for further 3-6 weeks. Examine regularly whilst in fridge and immediately remove any seeds which show signs of germination. Move to 8cm pots. Acclimatise and plant out when large enough.

Not the answer you're looking for? Browse other questions tagged germination perennials or ask your own question.

6
What's the best way to grow Crocosmia from seed?
5
Best way to avoid seedlings from bending and dying
13
What is the best way to germinating seeds in compost?
1
What is the correct way of placing echinacea seed in soil?
5
What is this whitish feather on my Echinacea seedlings?
2
How to increase chance of maple seed sprouting?
2
How can I transfer white comfrey from the front garden to the back garden by seed?
6
Starting shallot advice
1
Starting Zucchini, Bell Peppers and Tomatoes from Seeds