What are differences between Echinacea purpurea and Echinacea angustifolia?

One of my most important gardening goals for this year is establishing echinacea in several parts of my garden. So I ordered several bags of echinacea seeds from a seed shop. (I actually didn't pay attention on the exact latin name) However, I just noticed that seeds are not of Echinacea purpurea (which is the most common in gardens, and I expected this species), but of Echinacea angustifolia: 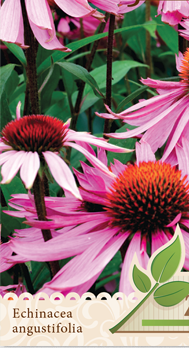 Do you know what are differences between Echinacea purpurea and Echinacea angustifolia, from gardening point of view?

Echinacea purpurea is the more commonly grown one - it tends to grow better in more easterly regions than E. augustifolia (which is native to the North American prairies). In appearance, E.augustifolia is known as the narrow leaved Echinacea because, yes, it has narrower leaves; it forms a large taproot, and these are often harvested in the wild to produce echinacea oil supplements. It's also somewhat longer lived than E. purpurea, lasting 10-20 years in situations that suit it, whereas E. purpurea only up to 10 years. In reality, either of these may well disappear suddenly, particularly E. purpurea - some growers suggest using them as an annual rather than reckoning on their remaining as a perennial.

Not the answer you're looking for? Browse other questions tagged perennials or ask your own question.

4
What tulips are best for perenniallizing in a clay-base soil?
3
Why are my hibiscus buds & leaves randomly turning yellow and dropping off?
5
What's the difference between annual, biennial, and perennial plants?
4
What has caused my Bleeding Hearts to multiply and spread?
4
What are these flowering perennials with white flowers?
3
What are typical and perennial garden green and flowering plants?
2
How to remove spikes from Echinacea purpurea seeds?
1
What is the correct way of placing echinacea seed in soil?
5
What is this whitish feather on my Echinacea seedlings?
3
What is this perennial that has accordian-pattern flowers with pink and purple tips?