How do I get rid of pill bugs in my vegetable garden (or is it even the problem)?

I have had multiple plants in my vegetable garden that have seemed to just vanish from the garden over the period of about a week. I have notice pill bugs eating the remains of the plants. They seem to be focused on my lettuce. How can I determine if the pill bugs are the ones at fault or if they are just feasting on the fatal lettuce remains? If they aren't the pill bugs, how do I determine what would cause it?

A little bit of detail: This is a new garden in which I pulled up grass and placed a thick layer of Miracle-Gro's Garden Soil for Flowers and Vegetables on-top of the clay soil that we have here. We have had a very large amount of rain over the last couple weeks that has caused everything to stay saturated for days along with some high winds that took out some of my tulips. I am in hardiness zone 6b.

Here is a picture of what the damage looks like on plant that was in good shape yesterday. 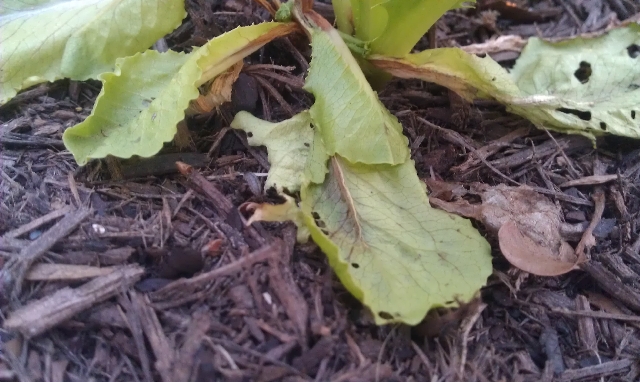 And the little guys under the damage (sorry for the blurry photo, I tried multiplies and this is the best focus I could get) 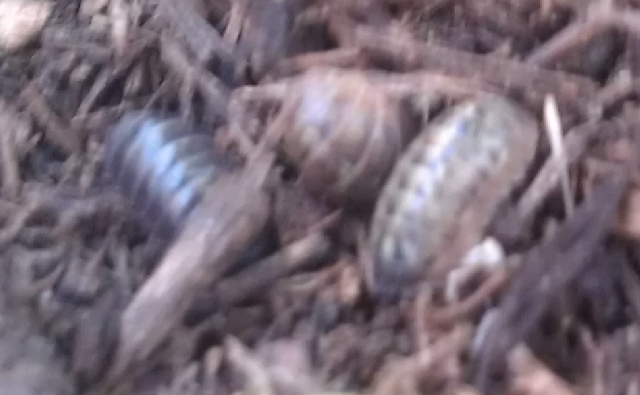 And a new discovery today. The bottom of my bell pepper plant appears to have been chewed on. 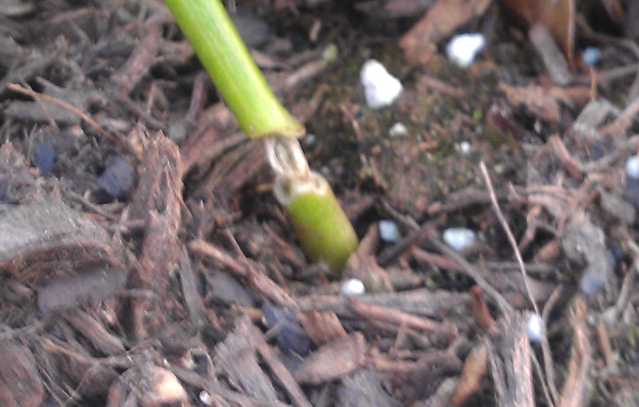 I have only ever noticed pill bugs feasting on stuff that is piling up and rotting as they usually don't come out into the air or sunshine. So I would be interested to know if you have enough space between plants and if you are leaving food (rotting leaves etc. piling up near plants). It seems strange that these guys would come out into the open to feed.

I have actually posted several questions about trying to control slugs etc. that were eating my lettuce, but I was never quite sure what it was. I ended up finding the source of the problem by going outside at night just before I went to sleep with a torch. If I needed to go the bathroom late at night I also went outside for a look until I eventually found the culprit. It was then a matter of control.

Your choices are then: manual removal by going out at nighttime for several nights physically removing the invaders, using traps (beer trap, slug pellets) or spraying your plants so they don't taste nice. Unfortunately in your case if the rain persists the last two options don't work.

Goodness! It's strange to see all these people saying that "pillbugs" do not eat live plants. I don't know if pillbugs (we call them slaters) are tougher in Australia, but they certainly look exactly the same and are definitely the same species.

I have raised beds... several years old, with no mulch but lots of potting mix and I have an absolute slater/pillbug infestation!!! My spinach and beetroot are doing fine, but when I put new cucumber, zucchini or pea seedlings in, the slaters have swarmed them and eaten the entire plant overnight.

I absolutely know for a fact that it is slaters/pillbugs because if you go out there at night each plant has at least 10-20 slaters all over it busily eating. Often they chew through the stem at the bottom first and chop the seedling down like you would chainsaw down a tree, and then they simply cover it and eat the whole thing!! They obviously exhibit this behaviour if they are in plague proportions.

I think they are so bad in raised beds as there are no natural predators in there. The next time I catch a bobtail/bluetongue/shingleback lizard in my garden I am going to pop him in the raised bed to have a good feed before releasing him! :-D

I have to put a chopped off clear plastic bottle over each seedling until they are tough enough to withstand slater attack.

I also put down vegetable cuttings, wet newspaper etc and then remove them in bulk when they are covering the newspaper/vegetable peelings. It's such constant work and they seem to multiply overnight.

We've always had a lot more trouble with insects, especially with young plants, when there was a lot of woody mulch, as is shown in the picture. For instance, we would have problems with earwigs swarming plants after dark and doing a lot of leaf damage. Earwigs aren't supposed to be a pest, but there you go. I think this is because the woody mulch provides a place for them to hide during the day. We now use grass clippings (not too green, not too much, no -cides), and only after plants are established.

This doesn't apply to cutworms - they burrow underground during the day. For them, we use cutworm collars around young plants - in our case, recipe #5.

I have also had a big problem with pill bugs eating my plants. They have really been feasting on my beans and I have photos to prove it. What I found worked was sinking a little cup or can into the ground so that the top of the can is ground level and filling it with beer. The bugs are attracted to the beer and fall in. That really seemed to help control them a great deal.

They are pill bugs. I'm having the same problem and I have caught them in the act. They have slowly eaten all my cucumber plants and all my pole beans. My raised beds are infested with them this year for some reason. I might have to give up on those things for this year. They are not bothering my tomatoes or squash or peppers for some reason, not yet anyway.

From your blurry photo I cannot tell whether you have pill millipedes or pill bugs. Even though they are not related, they live in the same habitat and eat the same things. In my answer to this related question, I pointed out that woodlice are some of nature's dead plant matter recyclers, digesting the dead matter that accumulates on the ground. Pill bugs are the same in their eating habits. Sometimes they will chew on ripe strawberries, or tender young plants, and things like that, but that is not the main part of their diet. Those holes were definitely not made by any of these critters. I also think it could be slug, but There are many other things that make holes in plants. Once you narrow down your list of suspects, the control method will be easier to find also. Your pepper damage could have been a cutworm. 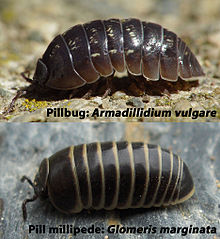 We have had the same issues. After conducting research, I thought it was cutworm as well. I put down cornmeal because cutworms like it but can't digest it, then die off. After a midnight look at my young bean plants, I am now sure it is the pill bugs. They were the only organisms covering my plants. I had found a website where the owners are growing organic. A few suggestions were to place out over-ripe fruit or tighly rolled-up wet newspaper. The pill bugs will go for the fruit or newpaper instead and in the morning you can throw out the fruit/paper which should be covered with the little guys. Also, the site suggested watering in the morning so that the soil is dryer at night when they feed. It may deter them more.

Plant sunflowers! FLOWERS next to your veggie gardens! These plants will in turn attract wasp and insect predator. These insect meat eating insects act like security guards over your veggie gardens. They eat insect meat, don't care about your veggies. P.S. The slugs come out at night and eat everything in sight! So do the grasshoppers!

The best way I have found to save young plants from pill bugs is to cut the bottom out of those plastic party cups. Bury the cup about an inch deep in dirt around what ever you planted and leave it till the end of the season.

Pill bugs will eat any tender plant - yes, they generally feast on dead materials from the garden, but they will also devour new shoots coming out of the ground. I have given up on planting anything from seed in my garden. And I regularly find them feasting on my pumpkin, squash, and zucchini leaves that are healthy and well above the ground. I have tried just about every garden-safe (meaning safe for my family to consume) option available. The only thing I have found to work is setting up beer traps along the garden. I use 2-oz cups (available on Amazon or at any restaurant supply store, but you could also use empty applesauce containers or any small cup) pushed into the soil so that the lip is at ground level. The pill bugs are attracted by the smell, they crawl in, they drown. Scoop out the dead ones in the morning, and refill with beer as needed.

So funny to see all these people saying oh no, it can't be the pill bug they only eat dead decaying stuff. Well, naysayers I'm here to tell you. I have been fighting with these little boogers for the third growing season in a row and YES, YES, YES they DO, DO, DO, eat the growing plant and the fruit and/or veg. growing on that plant. I have watched them eat up my beans, my squash, and my strawberries. My entire property it covered with them and no matter what I put out I can not get rid of them. They are like a plague in my yard...

If there was ever a doubt as to what goes on in your veggie garden at night with slugs, pillbugs, earwigs and millipedes, then this video will put the doubts aside:

All of the above pests eat ones veggies and herbs. They are after all opportunistic creatures. Put a meal on the table and they will partake.

P.S. You may not want to sleep under the old oak tree at night after seeing this.

I'm with all the people who say it IS the slaters (pill bugs). I'm in Australia, and it is so bad now that my lovely fresh compost is gone within two days of laying it around plants. Gone!

Right now I'm trying another method. I have planted and transferred everything into large tubs, which I was carefully ensured were slater-free. I will soon move all the tubs out of the garden area and let the chickens in to hopefully clean up every last one of them. Or at least get me back to the happy medium I enjoyed before they bred to such enormous numbers. Fingers crossed...

I agree with Ed Staub - looks like cutworm damage.

I've found a few things that work well in the garden with pests. We run a strictly commercial chemical-free operation and find other ways to deal with pests. Two things that have helped are crushed egg shells and diatomaceous earth.

Ed's right about the use of cutworm collars. Definitely have helped me in the past to keep those in check.

Not the answer you're looking for? Browse other questions tagged vegetables diagnosis pest-control or ask your own question.

6
Rollie pollies - are they harmful to vegetables?
9
Are woodlice eating my carrots?