White and brown spots on cacti

I've been away for the last two and a half weeks, and upon return I noticed a few of my cacti had developed white fuzzy spots, which were not there before.

In the worst instance, one cactus appears damaged and oozes brown liquid in one spot, as well as something that looks like sweat on the rest of its body.

I watered all of the plants profusely 10 days before leaving (which was roughly 1 month ago), and was sure to remove excess water from the pots. Before this watering, the last time I watered the succulents was 2 months prior.

Almost all of the affected plants are placed in a miniature greenhouse from IKEA. Due to an oversight, I left both top panels closed before leaving, so I assume air circulation was limited.

The plants are in front of a south-facing window, and on sunny days it they can get large amounts of light and warmth, so the lack of air circulation may have affected them negatively.

I read an article saying that the white spots may be caused by mealybugs. It seems treatable but I'd like to understand whether this is actually the cause of my issue and what the best way to treat this instance would be.

EDIT: It seems like this is a very widespread mealybug infestation. I spent today removing as many as possible, but I'm sure there's more. They're on at least 10 of the plants, maybe more. I'm not sure how they've spread so fast and so widely (I hadn't seen any prior to leaving my house 3 weeks ago, though admittedly maybe I hadn't looked carefully enough). Do you have any tips for clearing these entirely?

This is the cactus with white spots and a large brown spot of fluid oozing from one point on its body: 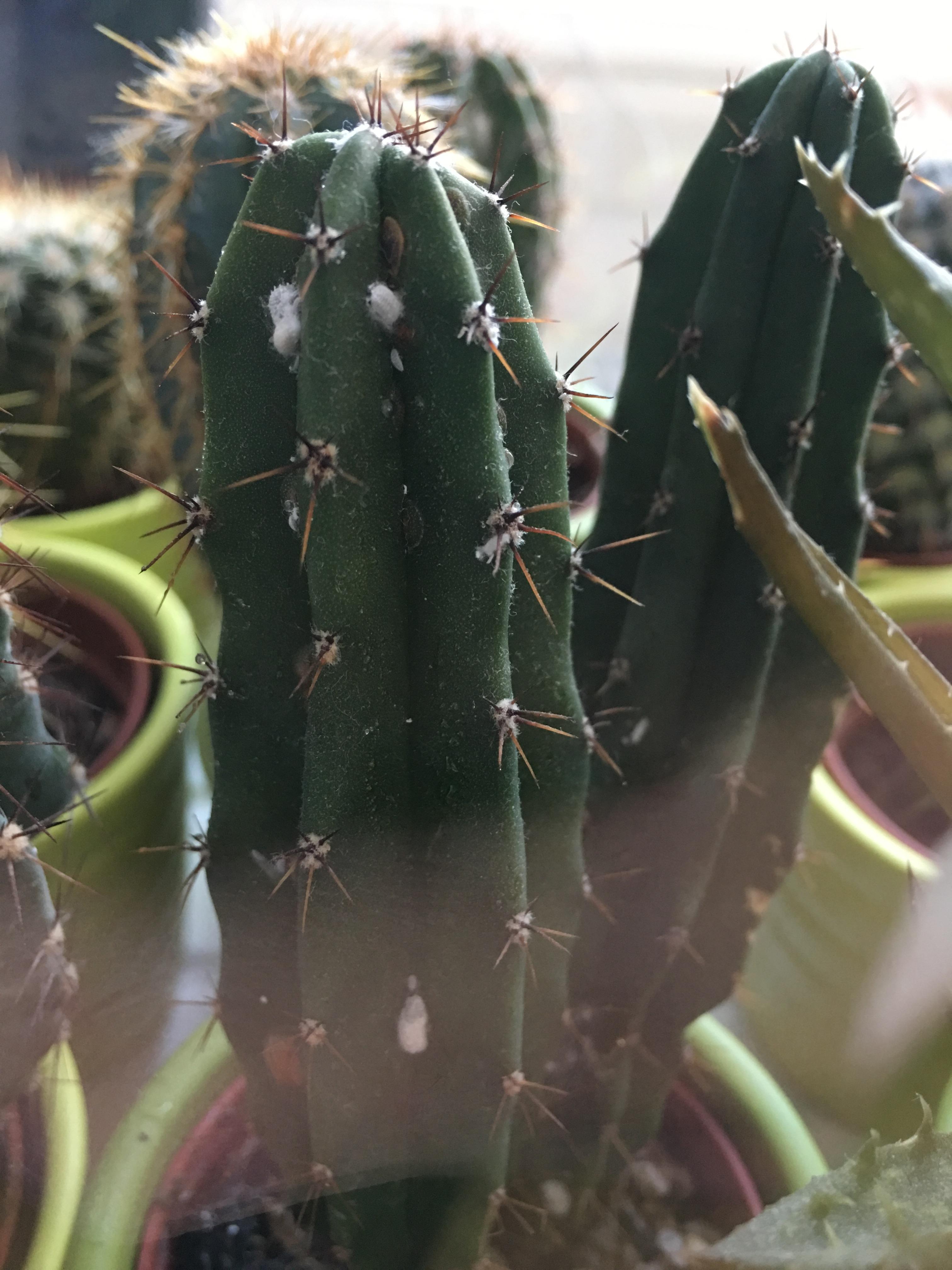 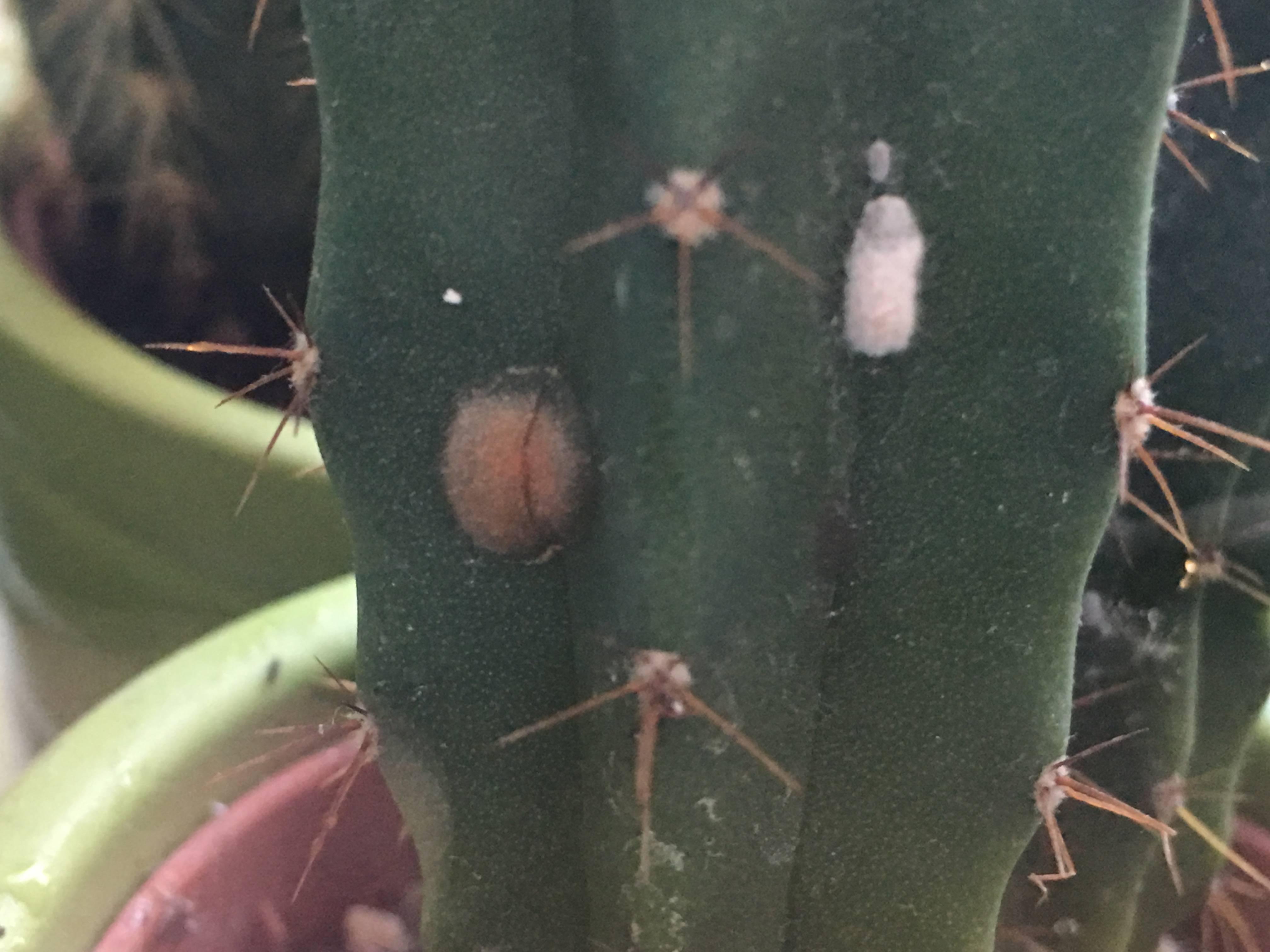 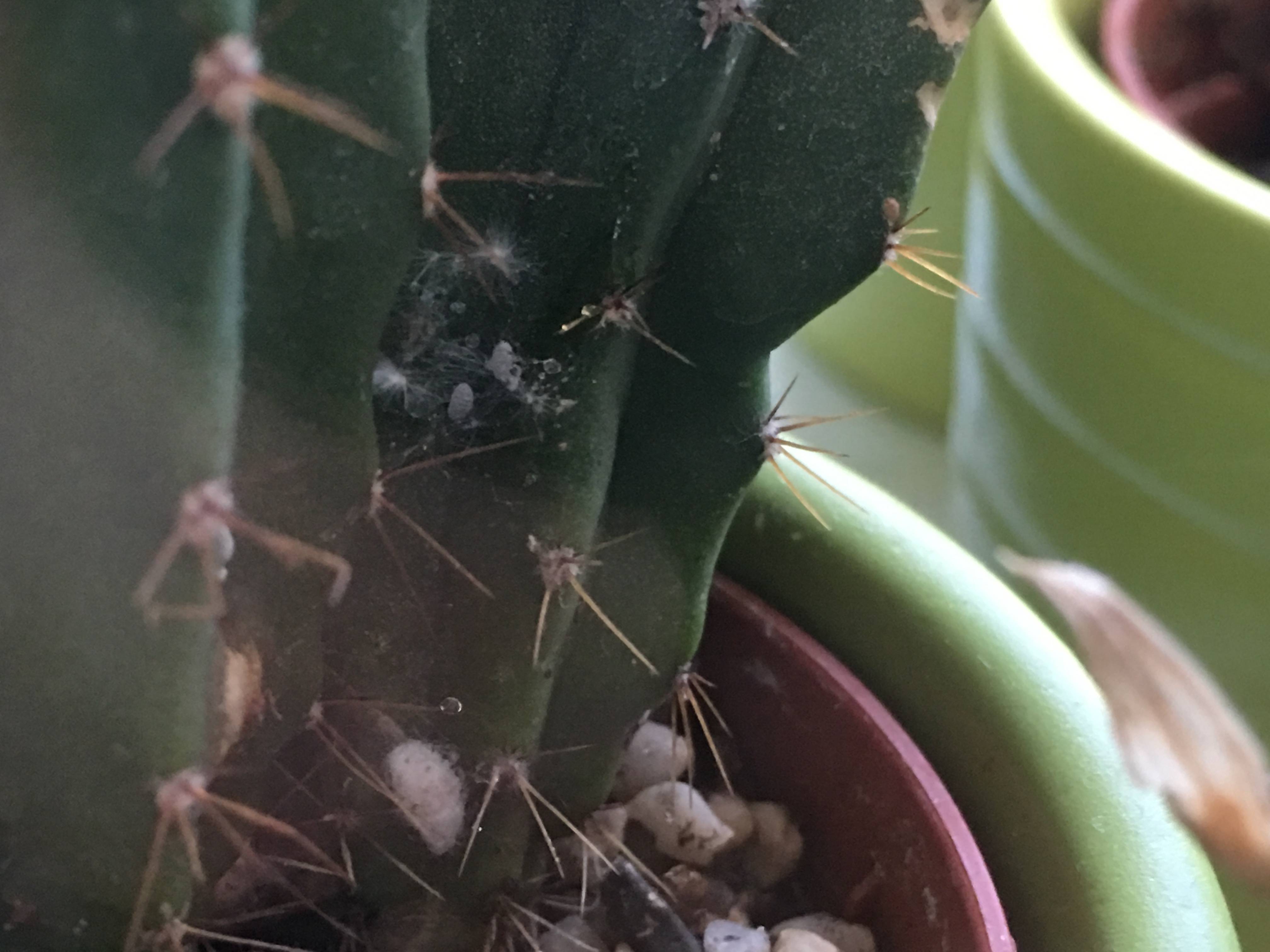 This one has multiple fuzzy spots and some less fuzzy and more defined small white spots: 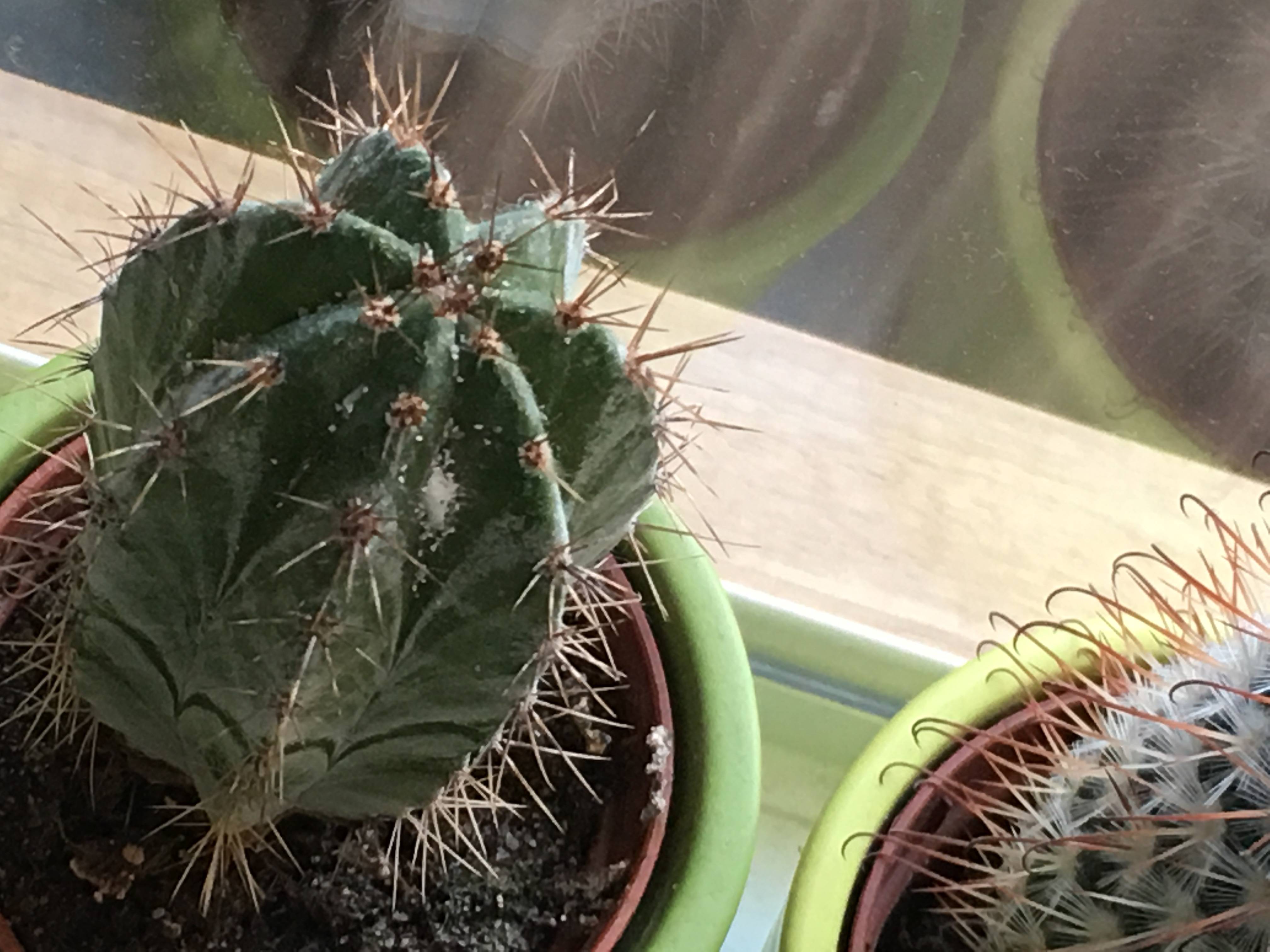 This one has just one fuzzy spot on one of the tips: 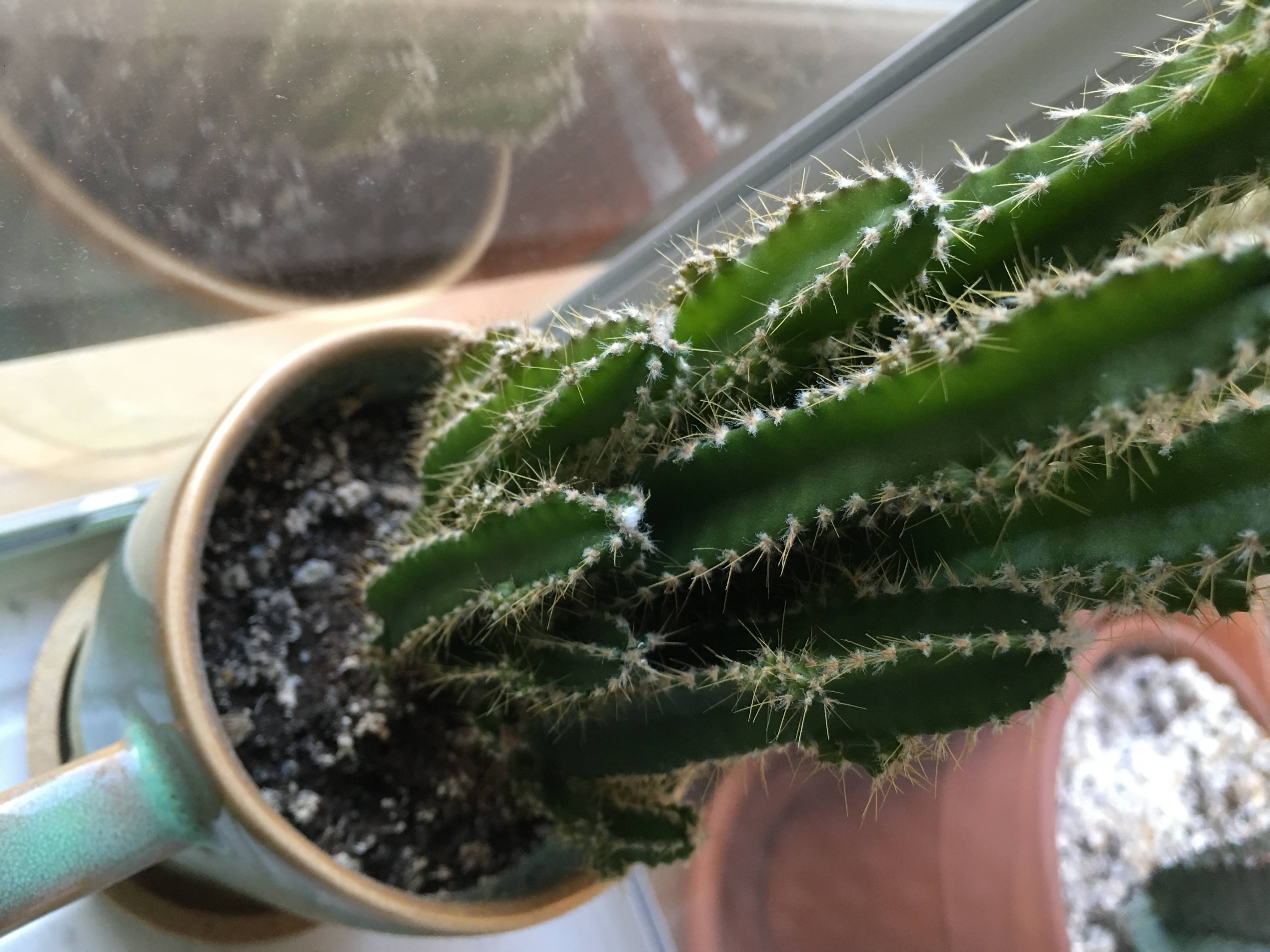 This one has spots all over its body: 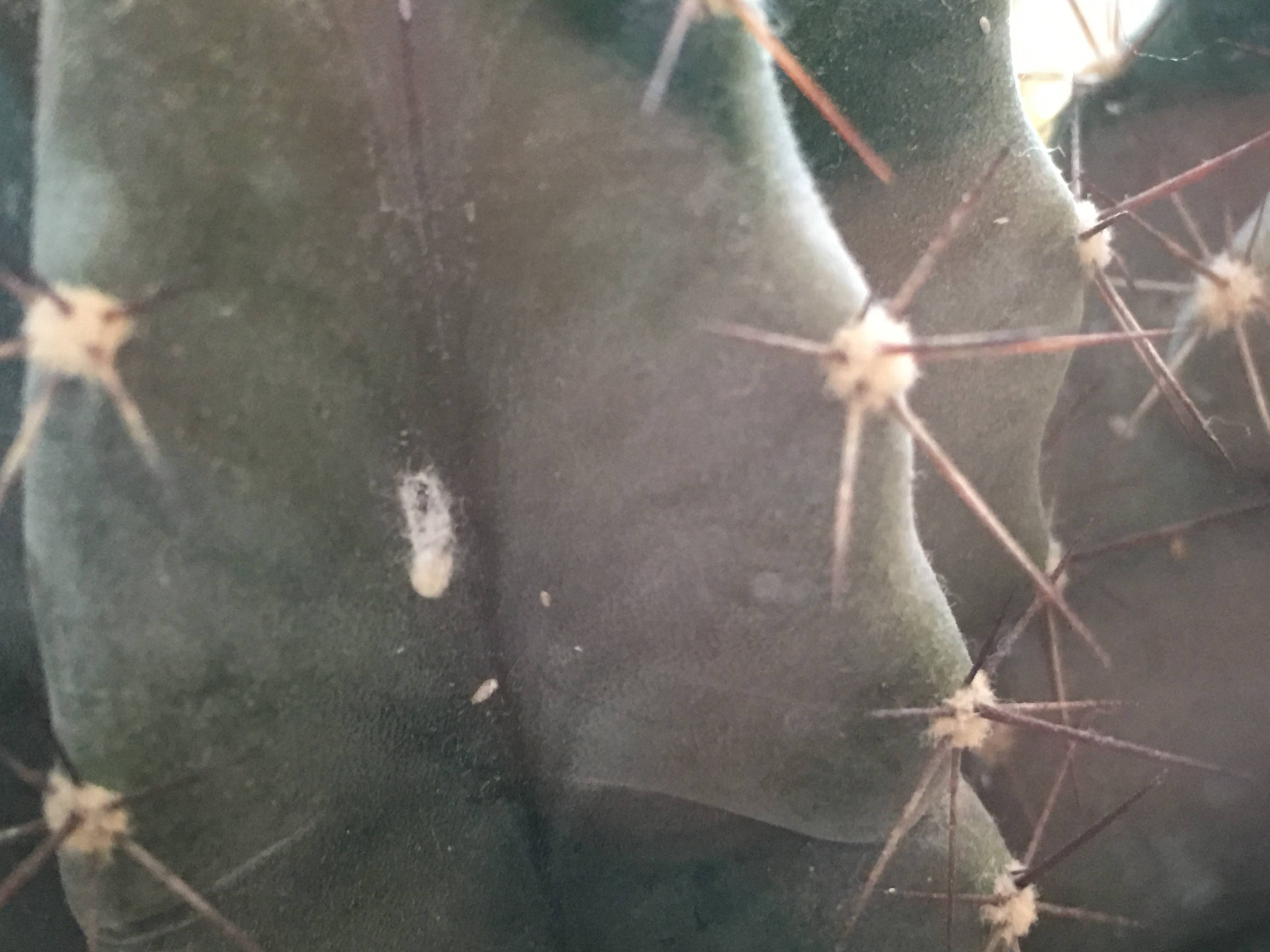 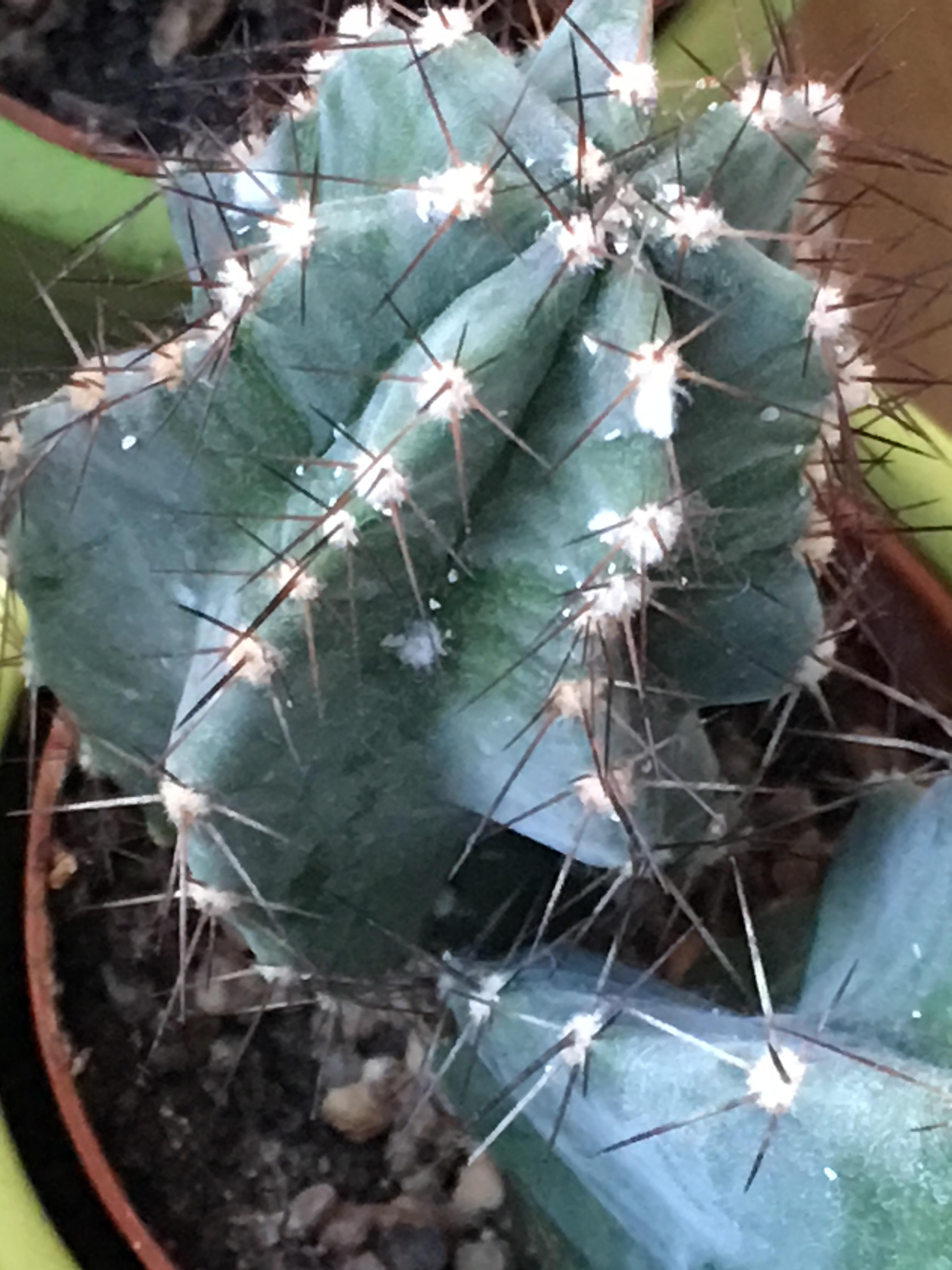 In one instance there are spots on the soil: 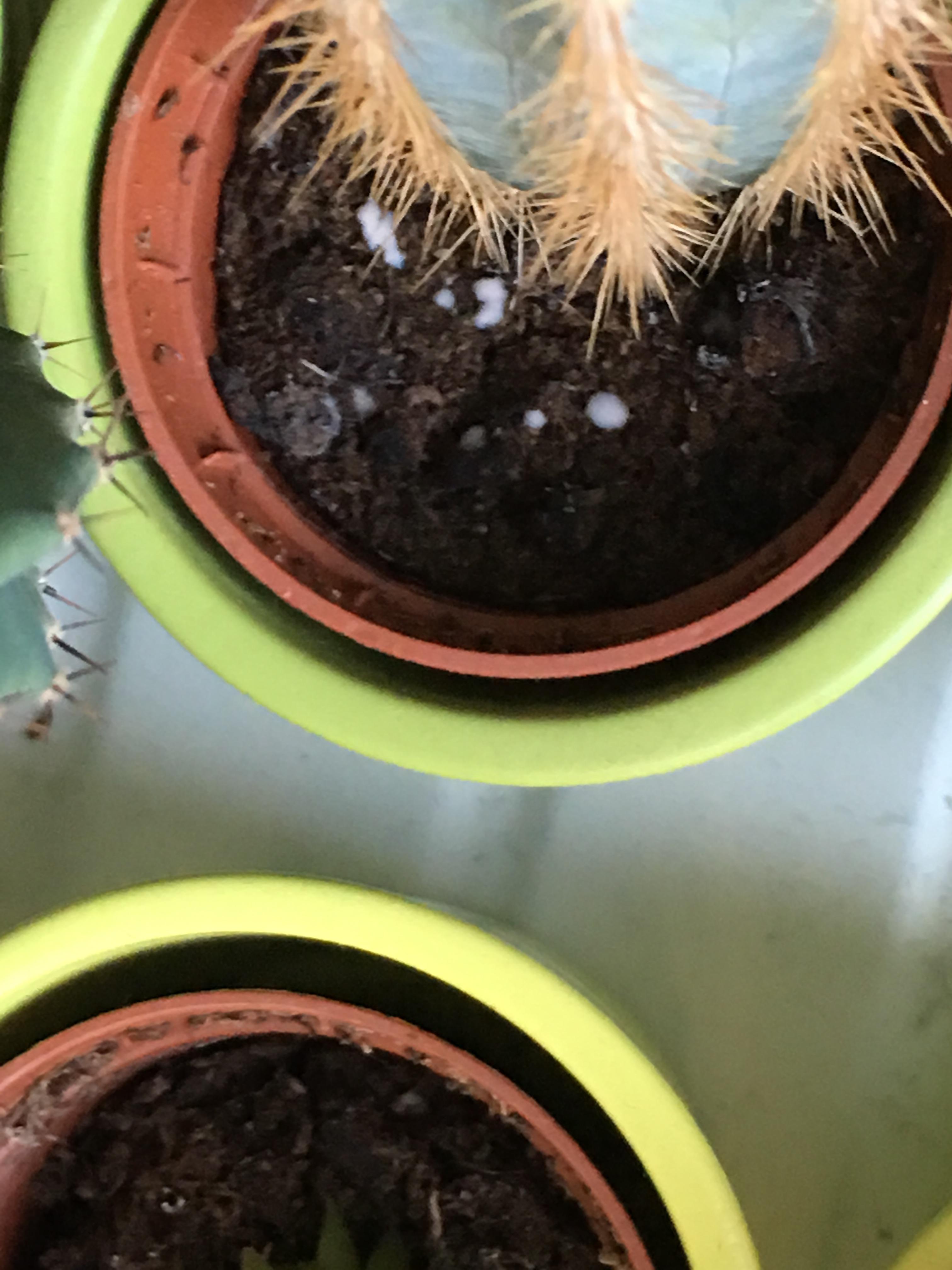 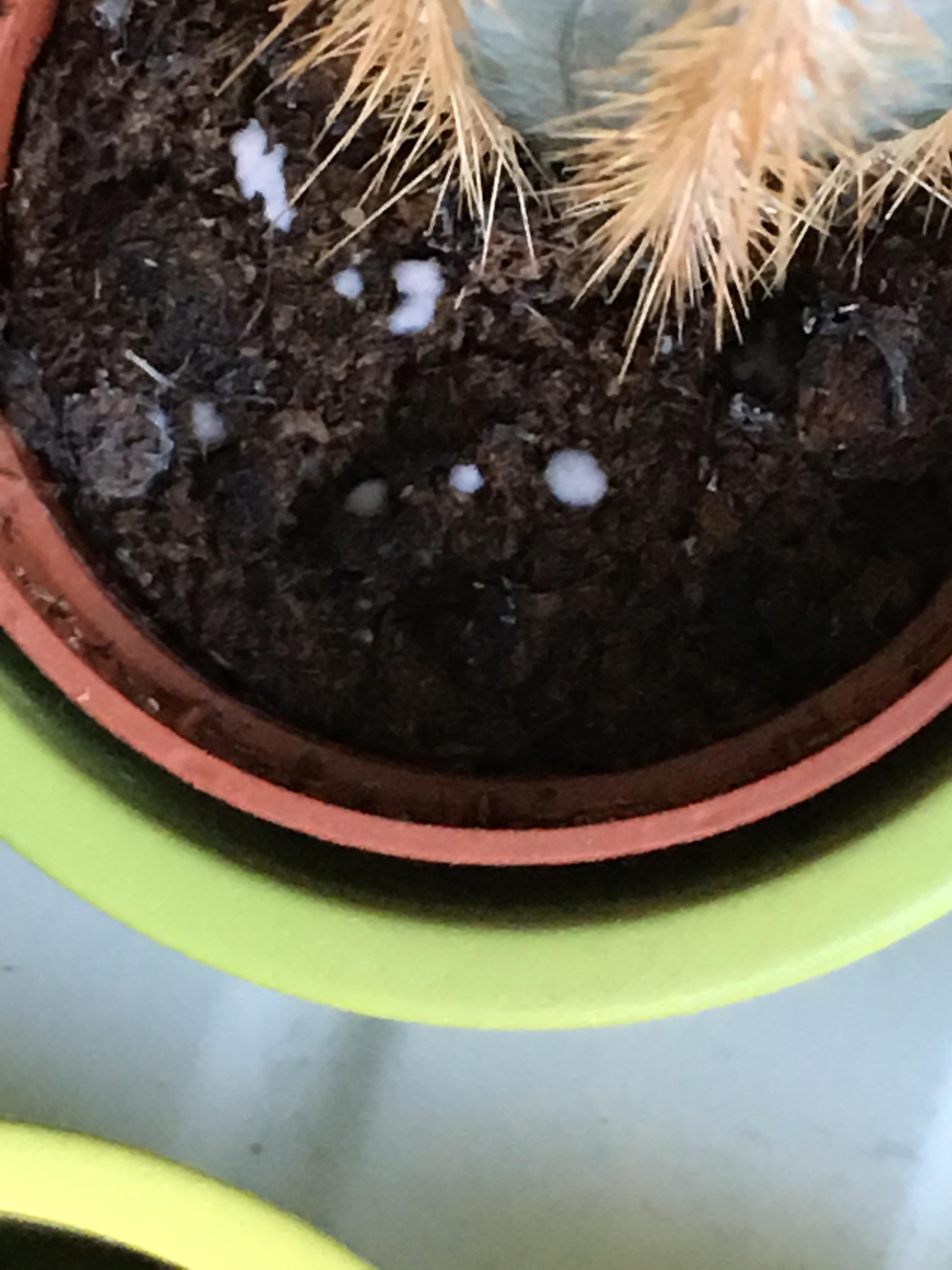 Two of the cacti outside the greenhouse also have fuzzy white spots. The white spots are new on the one in the first picture, but the one in the second picture has had fuzz at the top for a long time and I'm not sure if it's due to the same causes. 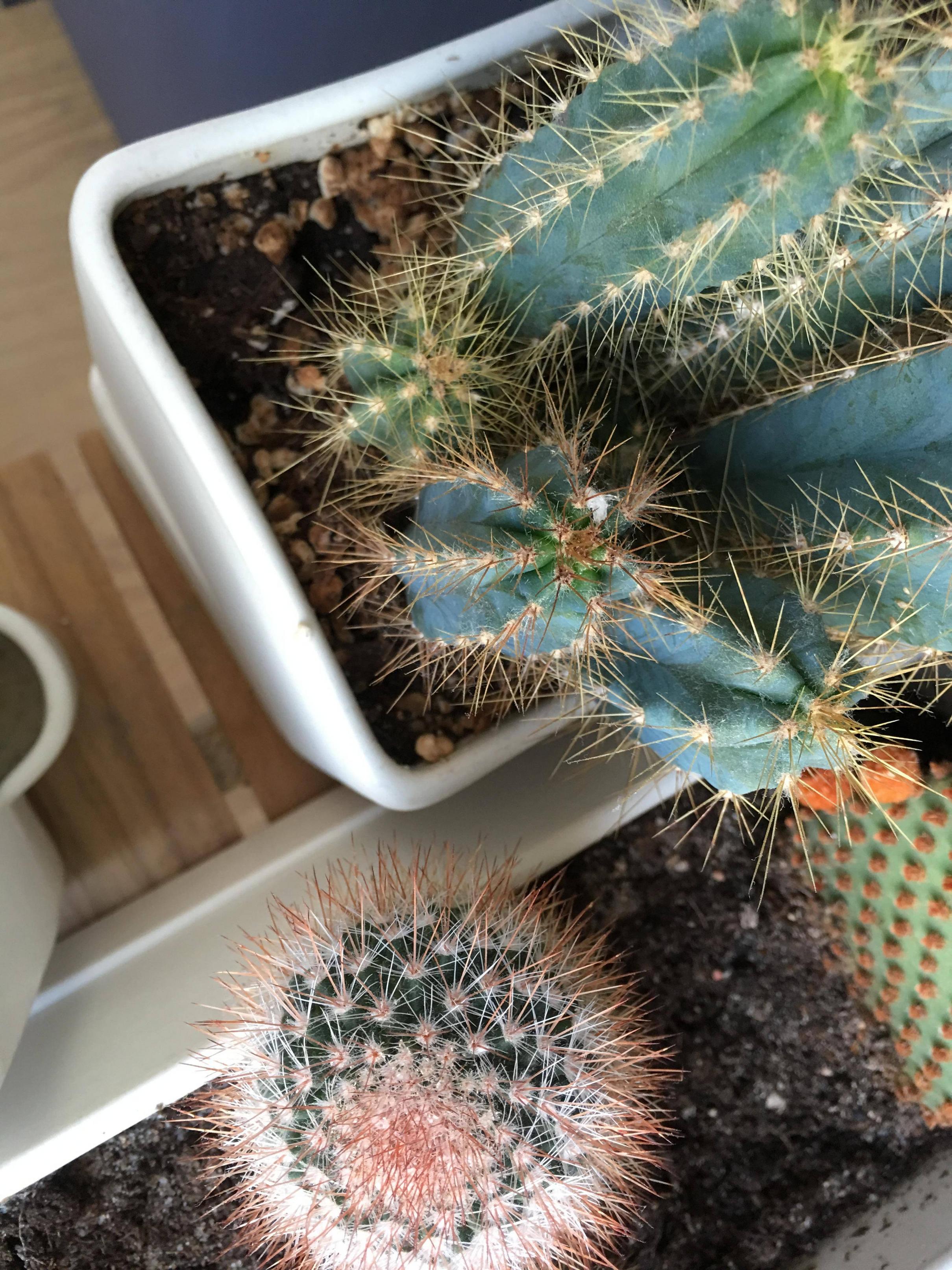 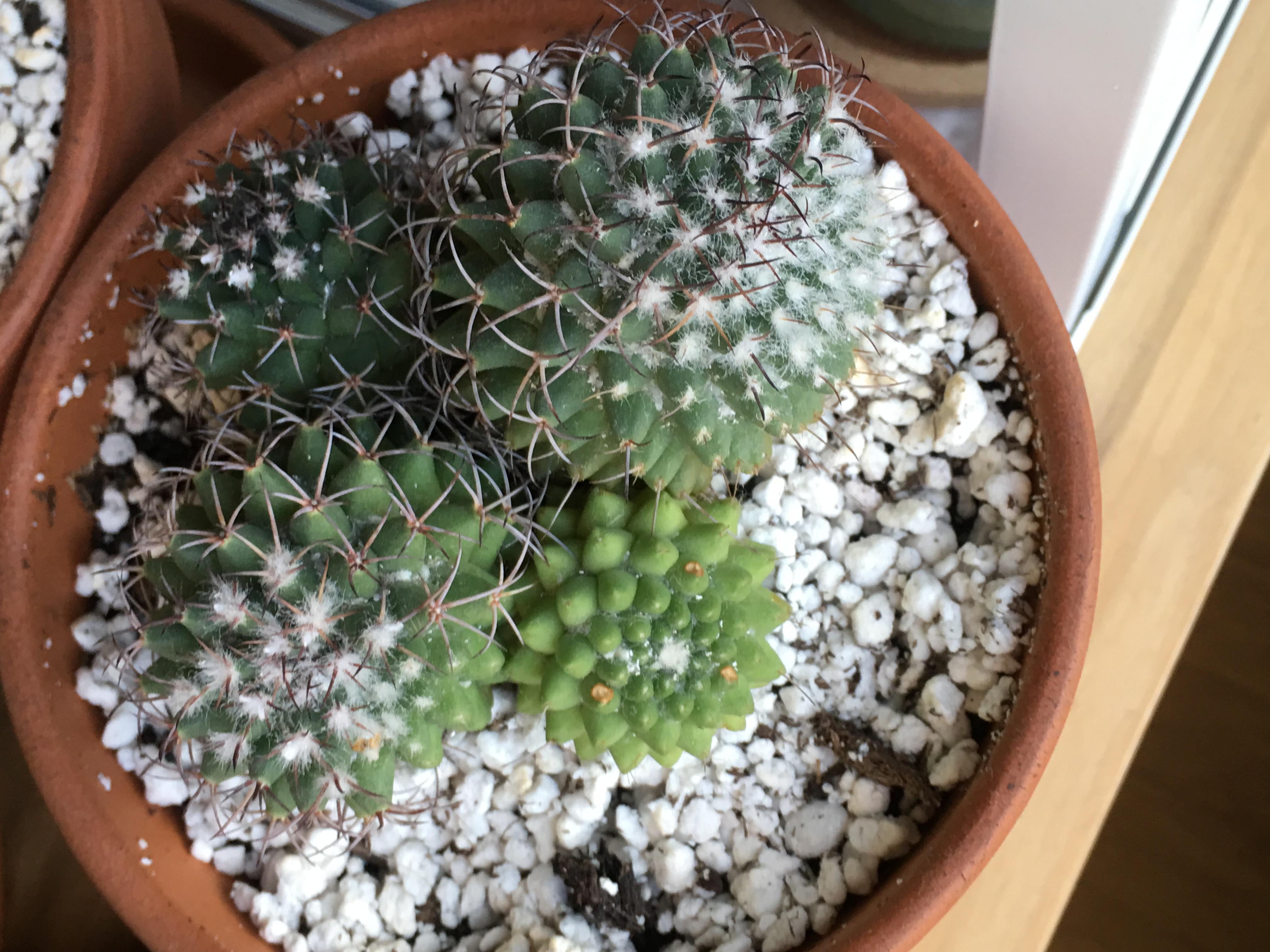 You have already figured out the problem, mealybugs. You have already started the beginning treatment, you have decided to remove those plants that do not appear to be infected, but if they are in the same room, you should treat them as if they are infected too. If you have plants in other parts of the house, you do not want to spread them wide and far.

You have started to physically removed some and use a ispropyl alcohol. It works great, you can use it as a spray or on a qtip. You should always test a small spot on your plants before using any product. Using the alcohol on the qtip is less likely to do any damage.

After you have destroyed the ones you can see, you need to treat the ones you can not see the 'crawler' these are young mealybugs looking for a place to hang out and eat your plant or in the case of males look for females.

You should repot as many plants as you can. Do this outside if possible to dispose of the soil. Terra-cotta pots should go through the dishwasher on sterilise cycle. Some people use a bleach and water solution to dip their pots in to kill the eggs embedded in the pores of the pots.

You need to make a decision on whether these are the only things you are going to do or are you going to also use another type of insecticide. I am not sure about Cactus, but you can kill crawlers with insecticidal soap, but it damages some succulents like Crassula. The same goes for neem oil. It is good at both contact killing and smothering the eggs and small mealy.

You can also use a number of other insecticides depending on the country you live this maybe very limited. Nionictinoids and other systemics have little effect on mealybugs. Mealybugs feed on the wrong part of the plant for them to ingest the poison. You are looking for a contact spray like, Gamma-cyhalothrin or any type of cyhalothrin. I had a huge mealy bug infestation this past summer. This was one of the treatments I used, along with neem, insecticidal soap and alcohol.

You will need to retreat every plant every other week rotating between some of these or other type of programs. Whatever you decided, it has to be kept up week after week, even if you think they are gone they are not.

You need to clean the whole area where the plants live. You need to look other organic matter they can be living on like burlap. Be systematic. Don't give up. 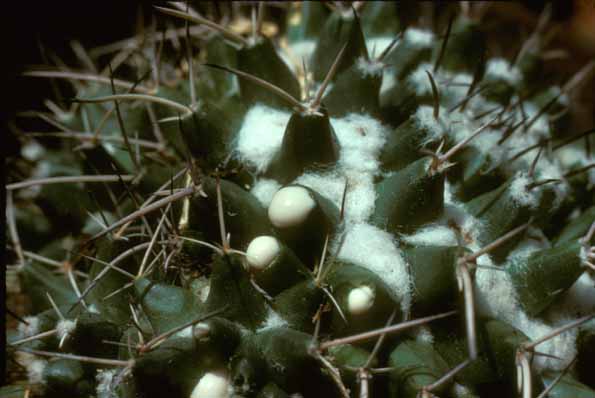 in which case it would be a Mammillaria oozing sap from damage.