Can rhododendrons be cut back?

I have a situation where a row of rhododendrons in front of the house is overgrown and getting large. I was told by someone else that they need to be removed and replaced with smaller rhododendrons. Is that true, or can they be cut back?

Rhododendrons can absolutely be cut back, no matter what the size. We've been pruning ours for years, and some of our bushes are 10ft tall. As long as they're not diseased, or too close to a structure, like the house, disturbing the roots is not necessary. They even thrive extremely well grouped closely together with other shrubs and trees.

Here is a good article explaining the three most common ways to prune the rhododendron. Drastic pruning can also be called rejuvenation pruning. The best time to do it is in the winter.

Rejuvenation pruning is best used to restore shrubs that have become leggy, overgrown, or otherwise unattractive. Many rhododendron species and hybrids can be severely pruned and come back as good as new.

Rejuvenation pruning removes most of the branches of the plant, initiating the rise of vigorous flushes of new growth from previously leafless old stems. The new growth matures into a new framework of branches that can then be shaped over the years to produce a stunning shrub.

If you want to do it gradually, start by cutting back the largest branches to the trunk, but leave them in a staggered or random positions, so you'll still have something to look at. However, if you really need to cut the whole thing down, you can do so, as you've already been told by @Tim Nevins. The same article explains that you can cut the entire plant to within 6 inches of the ground.

The reason it works is because rhododendrons actually have buds all the way down to the base, even if what you see only looks like wood. Look closely for small pink areas, which are risen and look like buds. Cut above them, and they'll start the growing process for the new branches. It can take over a year to produce flowers though, but at least you'll have a sturdy plant, and not have had to dig anything up!

From the same source I linked to above:

Don't worry about making mistakes: Rhododendrons are very forgiving—even if you drop a tree on them.

Here are some pictures of our bushes. They're different varieties and colors. They've been pruned many times to different sizes through the years, and had numerous things growing under and around them, and they just keep growing! We have them checked regularly by an arborist, and unless he saw something sick, we wouldn't even consider digging them up! 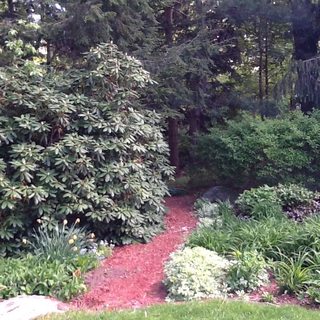 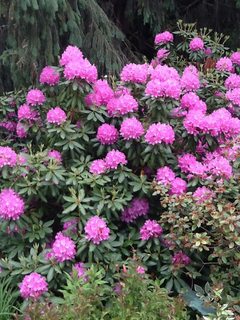 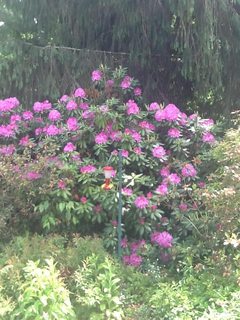 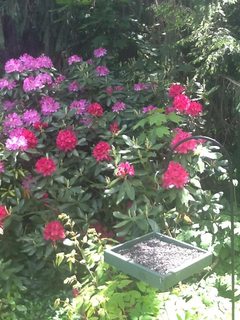 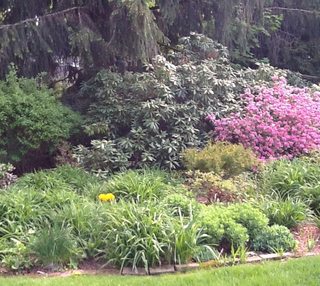 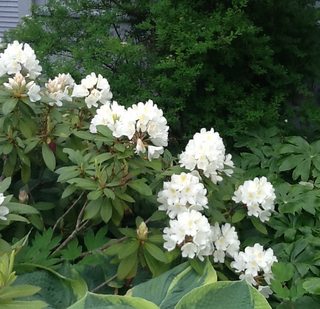 You can prune a rhododendron with a chainsaw and it will come back. I lived in Washington state for a number of years and did/saw this multiple times. Was the person who said to replace your big plants with small ones selling rhododendrons by any chance?

In all seriousness, leave a foot or so of the main stem and stand back.

Please please do not take a chain saw to those rhododendrons, please! Yeah, they will be shorter but ugly ugly ugly for years and years.

I've renovated rhododendrons for a living and kinda blew the owners away with the amount of thinning I did...in 6 months they were my biggest fans. Rhododendrons are small shrubs, medium shrubs, large shrubs like yours that are also classified a small tree. Gorgeous. They should look like beautiful, humongous Bonsai. To die for, worth their weight in gold (literally).

You have to send a picture of your rhododendrons and the environment, need to know why they are too tall, too thick, too wide for your needs. Do you remember which rhododendron they were? A tag left over somewhere?

Doesn't matter. A mature healthy plant is so very valuable. If I could see what you are dealing with and your landscape I would love to help you fall in love with those shrubs/small trees. 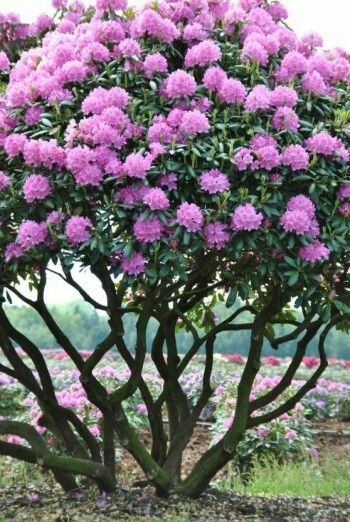 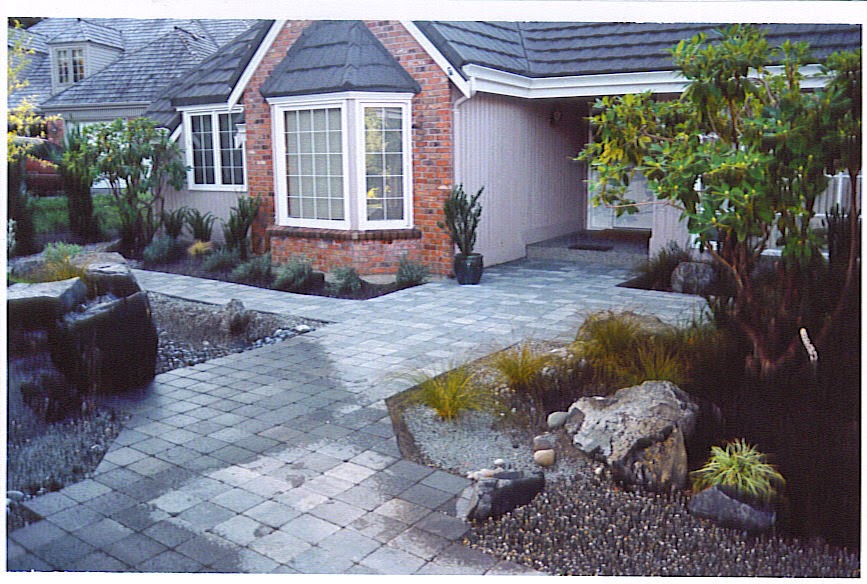 Not the answer you're looking for? Browse other questions tagged pruning rhododendrons or ask your own question.

18
Is it possible to indefinitely limit the growth of trees, hedges, and shrubs?
2
Cutting Back Leggy French Lavender
8
Bay Leaf Tree (Laurus Nobilis) with severe scale
5
How can I limit the height (depth) of our English (Common) Ivy?
8
Japanese Maple Care after years of neglect
2
Cut back the tops of newly planted Beech Hedging to encourage growth?
3
Trim evergreen hedge or not?
3
Problem with rhododendron foliage
3
How long will it take to grow branches back on a Green Giant?