Is this pineapple dying?

One month ago I brought home a store-bought pineapple (fairly beat up one) and decided to plant it. Planting process went like this up to the moment of asking this question:

It looked like the pineapple was feeling comfortable in this spot, because in spite of it not growing at all in the top part, it has developed some more roots - I can feel a resistance when trying to really gently pull the plant out of the soil.

Despite this progress I've noticed yesterday that the central leaf of the plant became yellow and dry, so I've watered it well as the soil looked dry too. It didn't help and today it looks worse (dead): 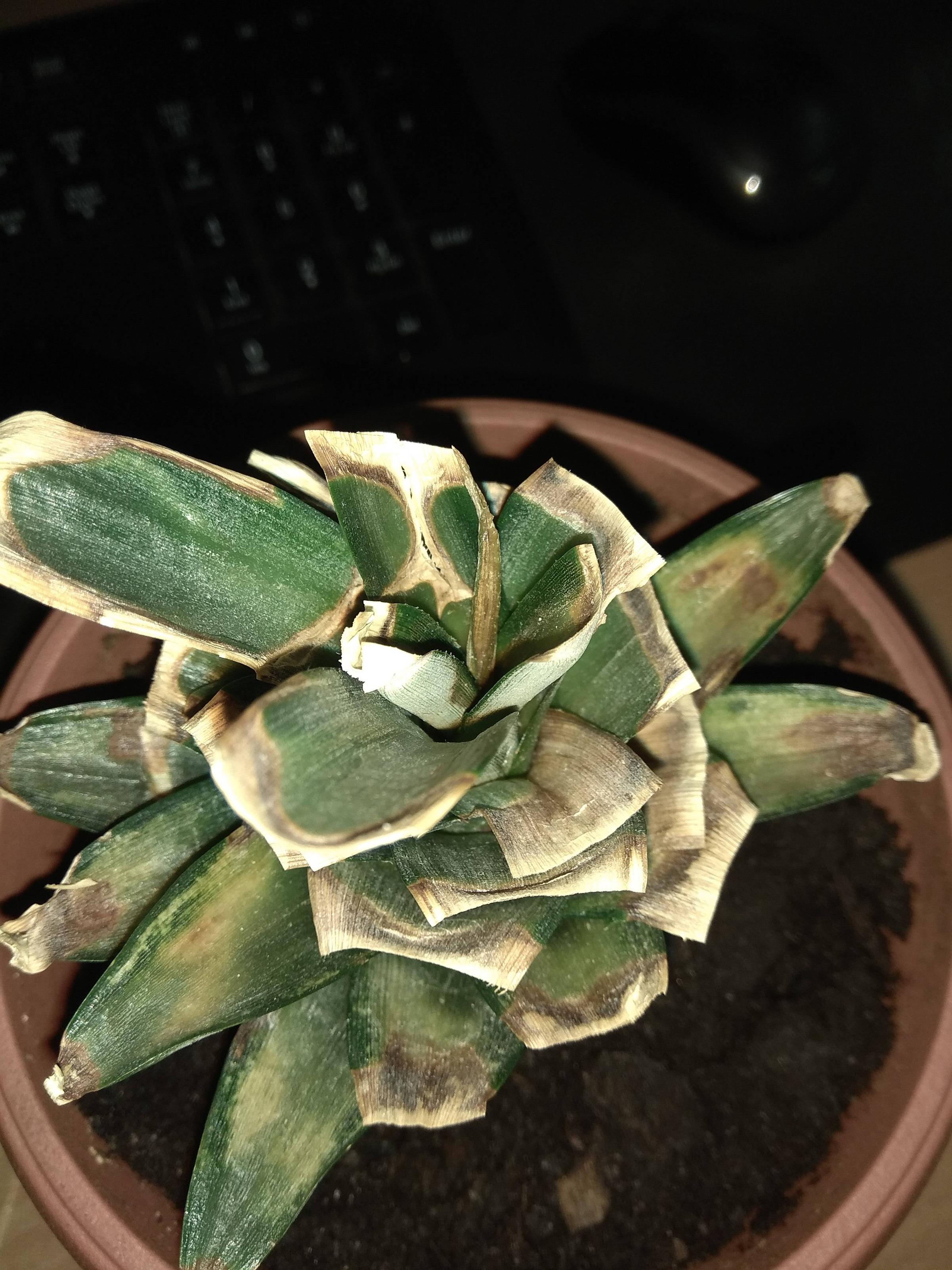 But the "center" of the plant does not look that dead to me: 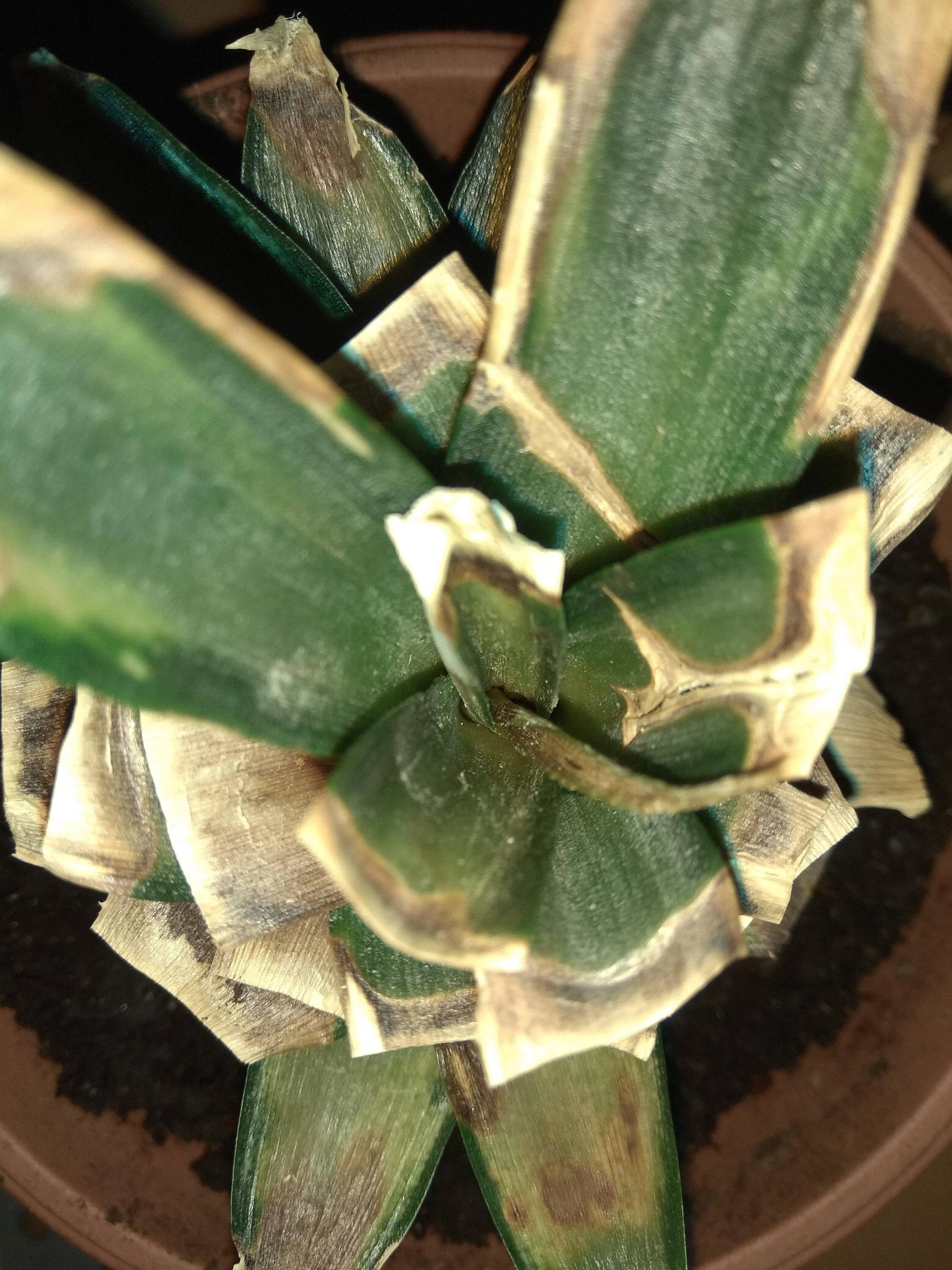 4 days ago this central leaf looked healthy and green - NOTE This leaf is not a new growth. It was on the plant already when I brought it home. It is hard to tell, if it grew at all during that month. If it did, then only by a few milimeters.

I removed the pineapple from the soil and tried to examine the roots as Graham Chiu's answer suggests. The roots were tightly covered in soil. I didn't want to scrape it off, because i didn't want to risk damaging them. Some parts of the roots were vibile and they looked hairy and white (like on the unclear photo below). The roots also overally seem firm and strong - I wouldn't call them mushy for sure. 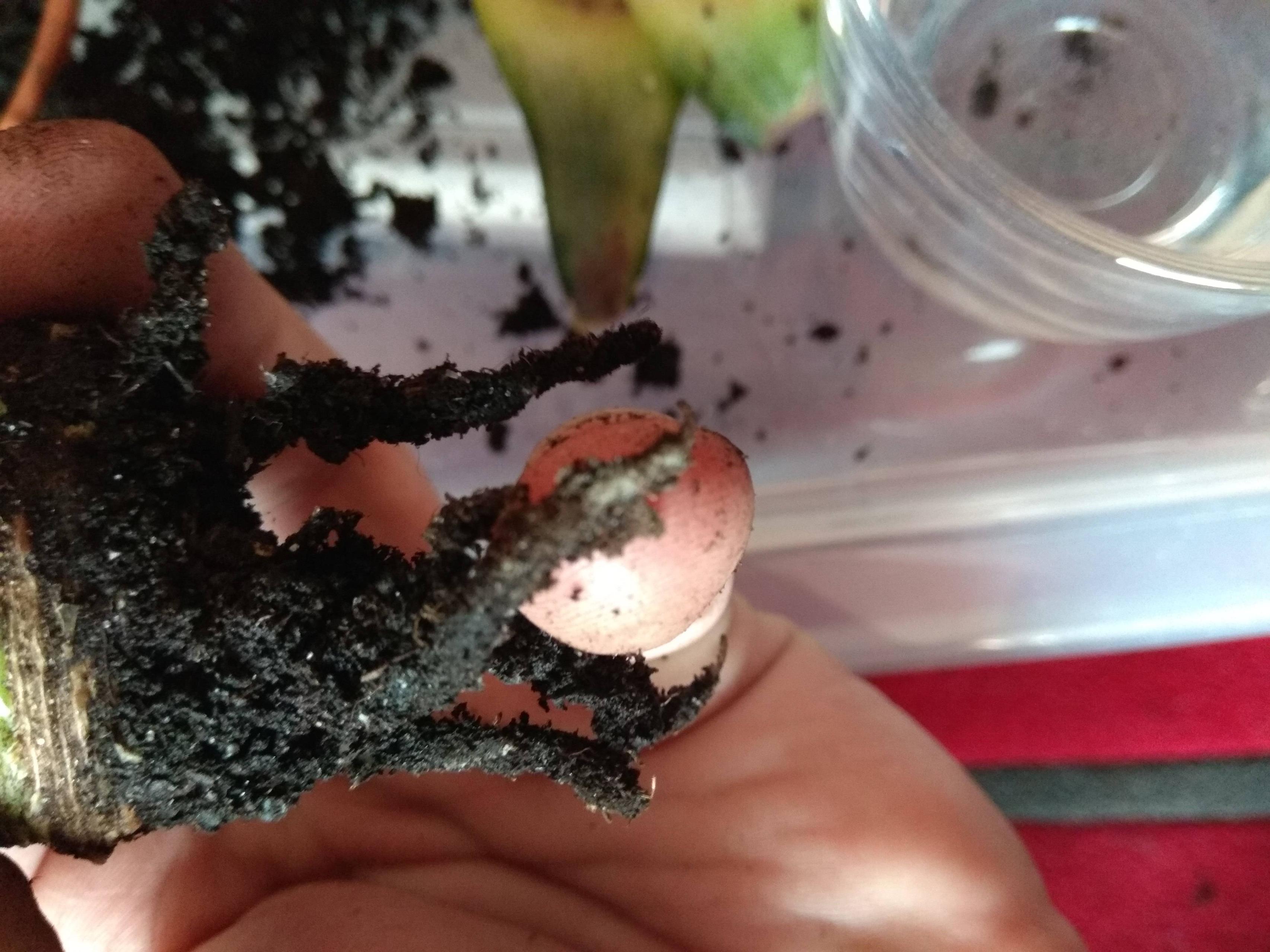 Before replanting I've removed some of the dead leaves from the bottom layers to enable more roots to grow out and I've discovered 3 things: 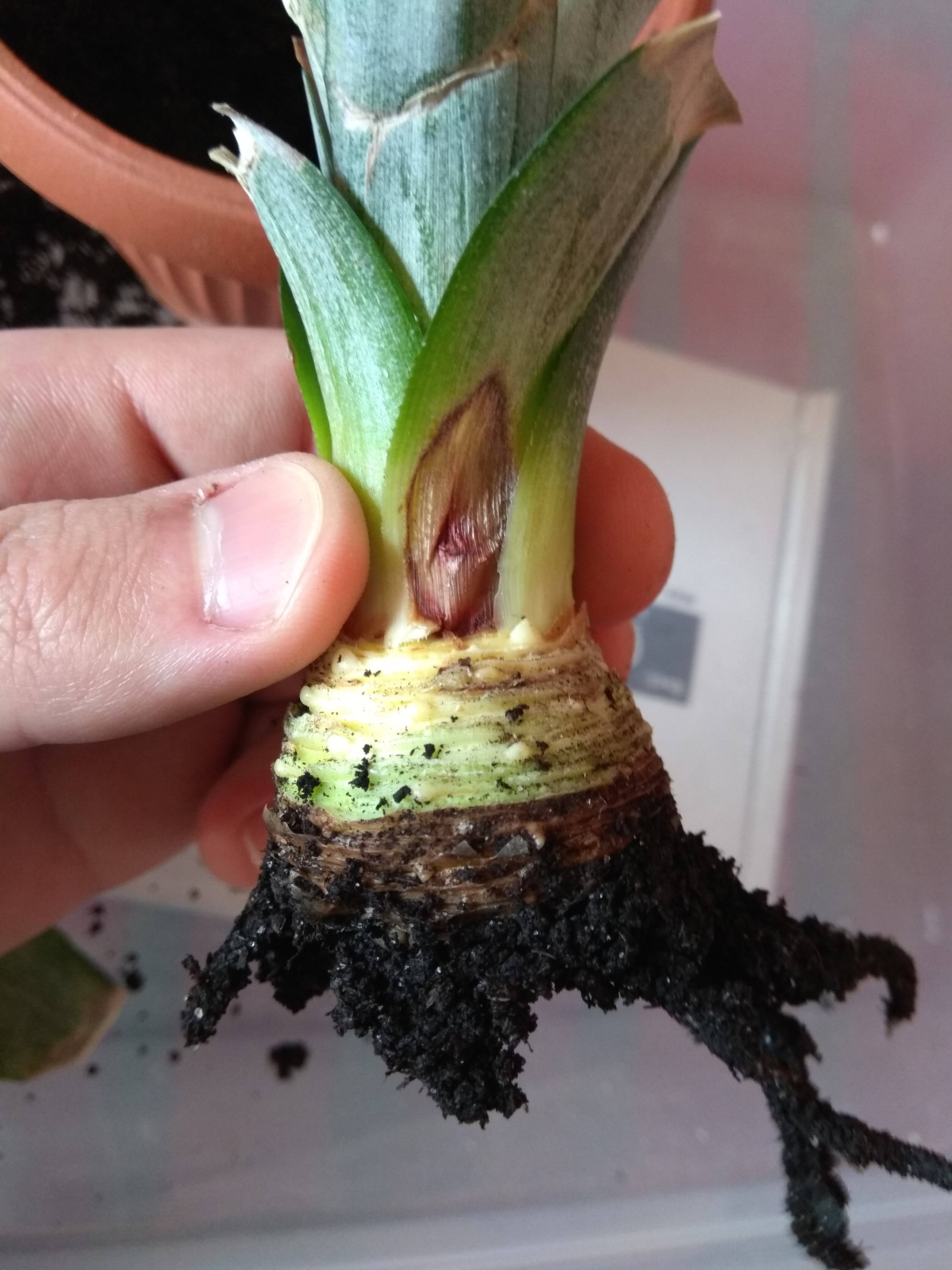 One of these big white bulbs: 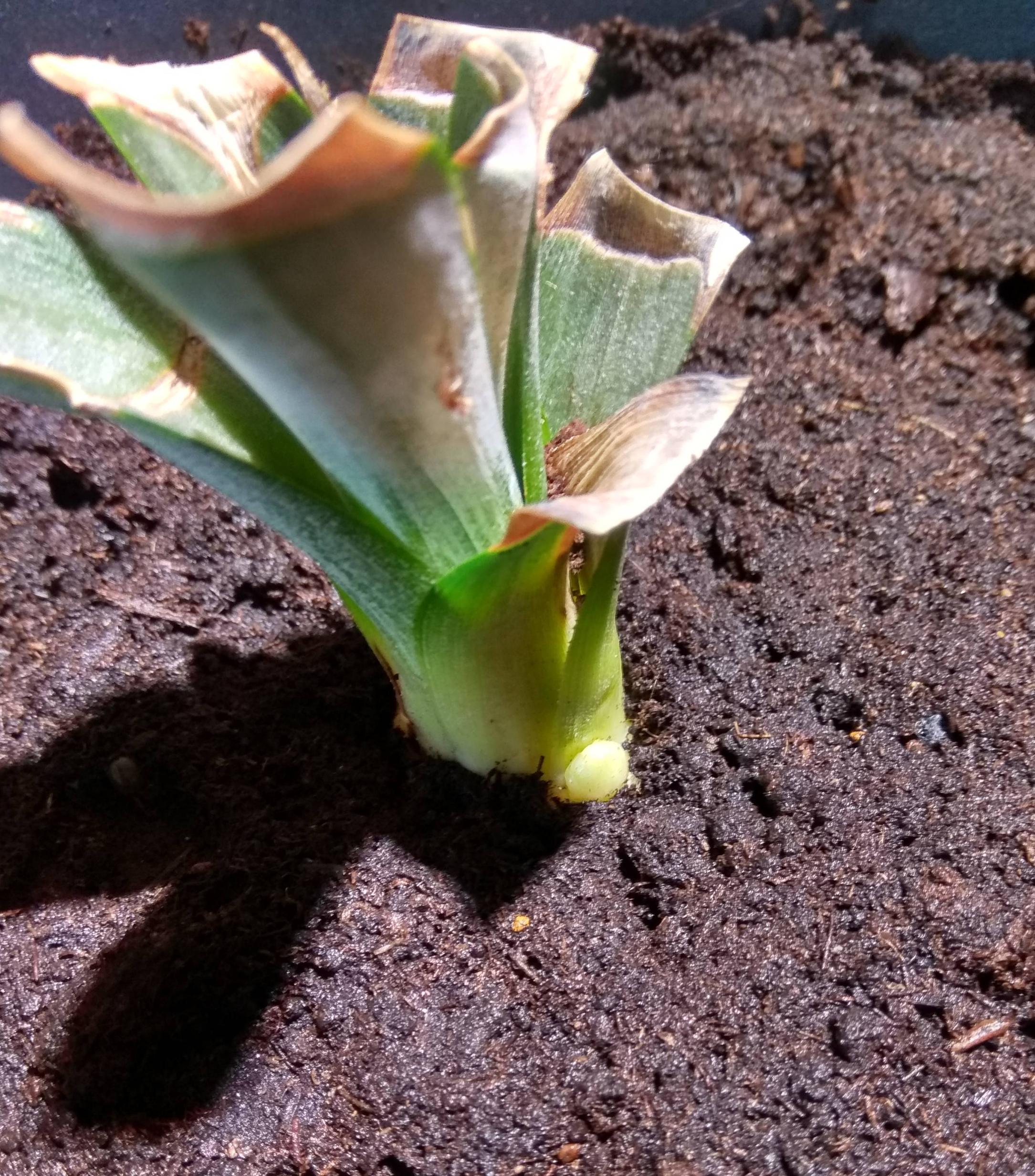 I've replanted the pineapple in a bigger pot, so I won't have to stress it one additional time later on, if it starts growing. I've used the same citrus soil as before, but this time I've mixed it with some regular homeplants soil. I've also applied this rooting fertilizer once more as the packaging says that it can reduce replanting stress. I've also watered the new soil. Bottom of the pot was layered with keramzit just like before and the plant sits now away from the radiator, 50 cm under this LED lightbuld that I've mentioned before.

A similar question was already pretty much answered on this site here, but I think it does not exactly apply to my situation (Is the center leaf also the "central bud" of the plant?) and I would like to know:

To plant a store bought pineapple the method is to twist the leaves off the pineable as one piece so that there's no fruit, and then to strip back an inch of leaves at the base so that you expose the roots. And then you plant it in potting mix, and water it in cycles so that it dries between watering to encourage root formation. As it grows it will take nutrients from the leaves which will brown. After a month the new central leaves should be maybe a few inches or more in length.

From what you're saying there was initially some new leaf formation in the centre which is now browning. This suggests the roots are failing.

Can you take it out of the pot to examine the roots?

And if the roots are rotted, cut them off and replant into a freely draining cactus type mix. You might be able to keep it going by spraying the leaves as it can absorb some nutrients from foliar application.

I would say it is not worth saving considering how easy it is to start a new one. Buy a whole pineapple. I just cut off about the top 1/2 inch , with leaves attached and set it on the soil. Trim off any imperfect leaves if you want . Put a little fertilizer in the soil as suggested and plain water in the center, occasionally. I have only done this outside so I don't know how well it works inside. If you live close to Houston TX I will give you a 2 yr old plant.

6
Is this pineapple plant dead?