How long is bacillus thuringiensis active?

A few weeks ago I sprayed my broccoli and bok choy plants with bacillus thuringiensis in an attempt to control caterpillar numbers. I'm pleased to see no new caterpillars (pieris rapae larvae) since then even though I have seen eggs laid on leaves.

However, bacillus thuringiensis is said only to persist on the leaves for a few days so why is the effect lasting so long? I think the recommendation is to respray after three weeks so it's not just me.

Do the bacteria numbers increase in the soil after application, or is there some other mechanism that suppresses the larvae?

Ps: diy expansion of the bacteria using a milk culture

Most commercial preparations of BT contain both the spores of bacillus thuringiensis and the crystal toxin produced by the bacterium.

It's the actual insecticidal crystal protein that is required to kill the insect, and this dissolves in the highly acidic pH of the insect gut activating the poison. 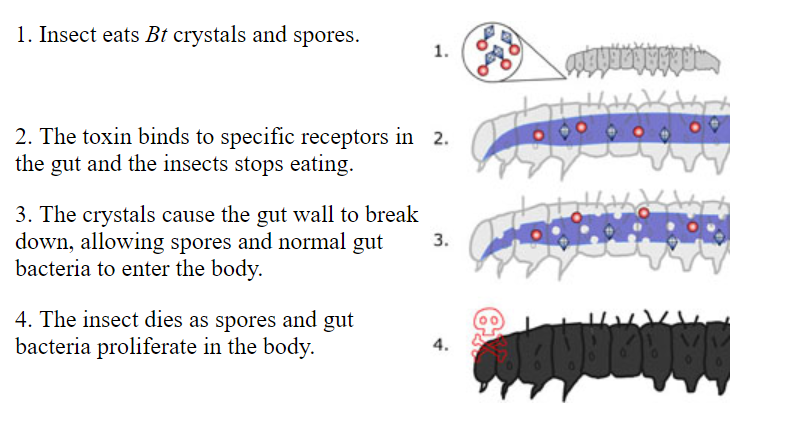 Now the bacterium and toxin only persists for about 4 days with a bacterium half life of about 3.8 hours on leaf tissue due to the sterilizing effect of UV, and presumed breakdown of the crystals in the environment.

But the infected insects constitute another source of the bacterium since as they die their bodies become infected with the bacillus and spill their contents. So, I suspect that is why the effect appears to persist for a few weeks.

Not the answer you're looking for? Browse other questions tagged pest-control pests insects or ask your own question.

27
How do I get rid of white flies on my basil?
9
How can I get rid of a large hornet nest in my hollow tree?
9
How can I handle a cricket problem without using pesticides?
1
How do you get rid of a swarm of cicadas?
8
How can I remove moles from my lawn?
4
What is this small green bug with long legs and antennae, in New Zealand?
5
What are these insects on my Arabian Jasmine plant & how can I eradicate them?
3
How long will leafhoppers stay after grapes are removed?
2
How should I move a plant indoors without bringing in bugs?