Can my lavender be saved?

So my lavender plant isn’t looking so good. It is dried out on 3/4 of the plant. Has been this was since Aug.

I think it may have gotten some exposure to roundup through the roots since some weeds were sprayed in the area.

Can it be saved? Or should it be pulled and replanted? 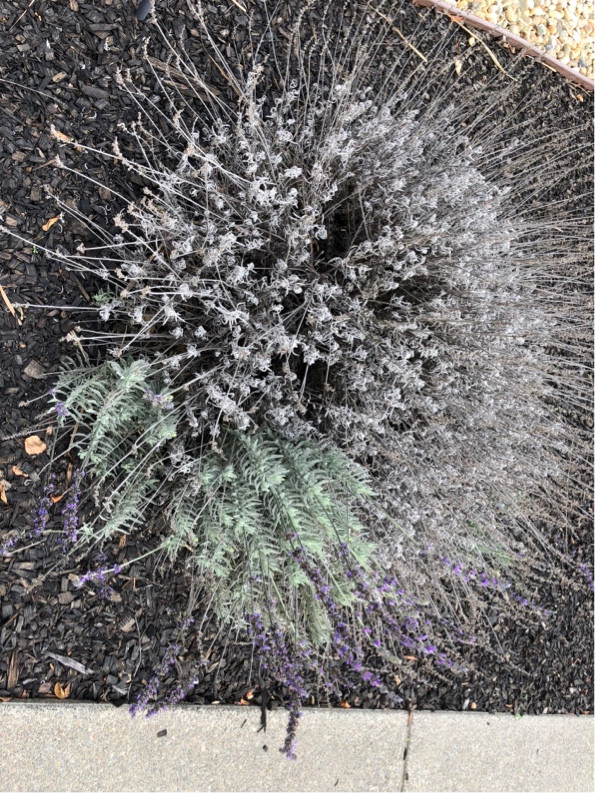 I am sitting here freezing and you've been out playing in your garden? Life ain't fair! Grins. What zone and hemisphere of this planet do you live?

There is a bit of life evident for your lavender. I would pull this plant up, rip off the dead roots and plant material, plant the live remainder in a one gallon pot of sterilized potting soil.

Glyphosate works primarily by being sprayed or applied to vigorously photosynthesizing leafy plant material. It is then transported to the roots, killing the roots and then the entire plant in 3 weeks.

If you hadn't said glyphosate, your plant is displaying very normal lavender die out. Is this the only lavender? What other plants are in this bed? You will need to replace this lavender but it would be nice to know the new lavender will not have the same problem. Next year, if the bit of lavender you transplanted into a 1 gallon pot in just potting soil thrives, you will be able to add to a lavender 'mass' ??

So if there had been the tiniest bit of wind that day you sprayed, I'll bet your lavender got sprayed. This is called 'Drift'. It takes minuscule glyphosate sprayed on leaves to kill a plant.

Glyphosate is only advantageous when needing to kill a large area of weeds. Should never be used in ornamental plant beds or vegetable gardens. I only used this for gravel walks and driveways, gravel patios. Only in the spring after weeds have had a chance to get vigorous but before they go to seed. And on a dead quiet, very warm, still air day. Sprayer held down very close to the gravel. It only takes ONE drop of glyphosate (a big drop) to kill a plant whether weed or ornamental or edible. You do not have to spray till runoff.

Has it been 3 weeks since you sprayed? How much was sprayed? Did you soak the soil?

Not the answer you're looking for? Browse other questions tagged diagnosis plant-health or ask your own question.

11
Why does my blueberry bush have brown/scorched leaves?
2
How can I make my Moringa Oleifera happy again?
4
Mint is becoming more withered
3
Why is my Cayenne pepper plant losing leaves and curling/burning at tips?
3
What is causing large white spots on my sweet basil seedling's leaves, and can the plant be saved?
0
Nerve plant with curly crunchy leaves
3
Is my areca plant dying or dead?
1
What is the best way to de-weed a lawn?
2
Is this moth orchid irretrievably dying?