I am a beginner gardener. I've heard about raised flower beds a lot. I would like to know what would be pros and cons of building a raised bed like this one: 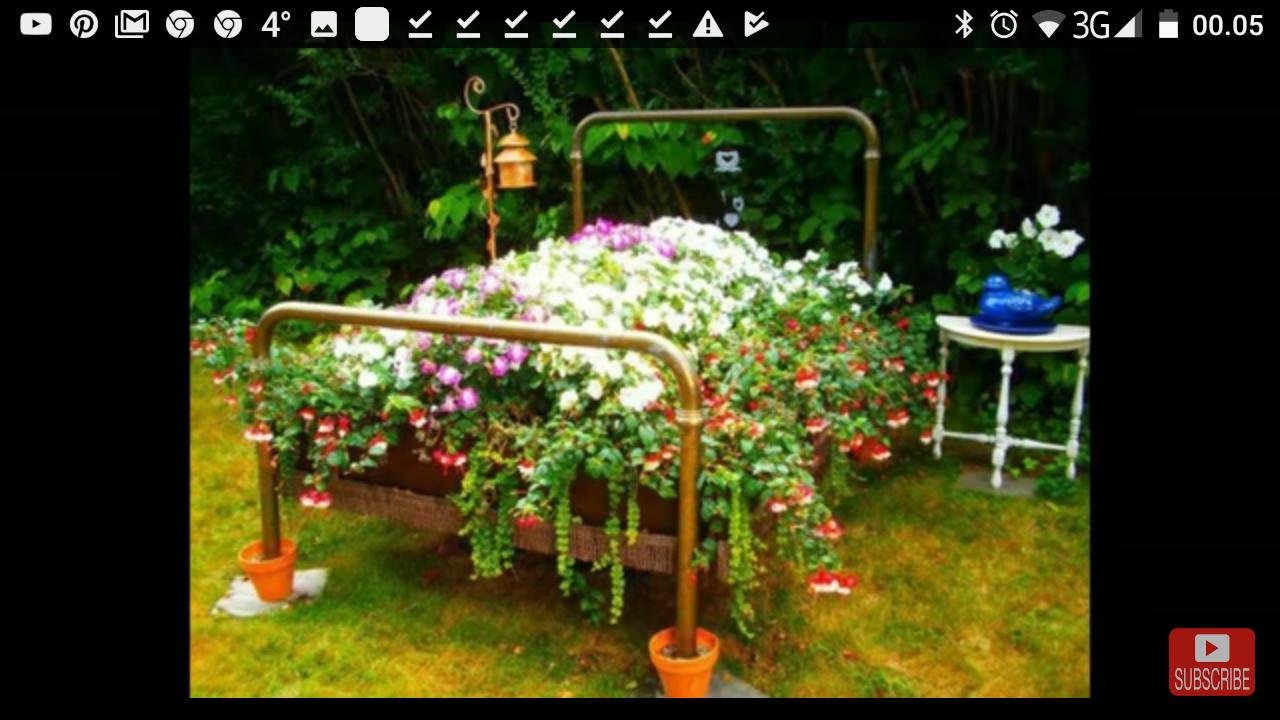 This is not considered a raised bed although by definition sure fits the bill. It is most certainly a container garden. A garden in pots. Lots of maintenance. Lots. The only soil you should use is potting soil. Fertilizer that is lower in N than P and K.. Watering will be almost every day. Deadheading constantly. This feature is best presented in an established garden. A great time to find plants that thrive with the same needs! Bedding partners...

The pros are you will be very involved day to day to maintain. You will be totally responsible for life and death. In a garden situation you get a bit of leeway. This is a pot out of doors that will need major attention. Worth it for sure.

The cons are how much you want to invest of yourself, time, and a bit of money.

That's a fun arrangement! It isn't really a raised bed as such (though it is a bed!), it's more container gardening. This is a quirky novelty feature and like most of their ilk, it's filled with summer bedding as a temporary display; it looks like it contains trailing fuchsias, Lysimachia mummularia, and maybe Impatiens and/or Petunias. They're usually built in repurposed objects, like this old bedstead, old water tanks, wheelbarrows, toilet/lavatory stools, even hand basins or sinks, and I saw one once that had been a bedside table (nightstand in the USA) with the drawer in the top partially open and filled with summer bedding and the bottom shelf had another display sitting in pots. Almost anything can be pressed into long term or temporary service as a display medium. Because the wood surround fitted on the bed isn't very deep, then long term planting, unless it's just with rockery alpines, maybe succulents like sempervivums, or other small plants which don't get very tall, isn't possible.

Raised beds sitting on soil are usually created to improve drainage, sometimes because the soil on site is heavy and often waterlogged, or because there are particular plants that someone wants to grow that require well drained soil which won't grow well in the existing soil conditions. Raised beds tend to drain better, and some plants that do better in damper soil don't thrive so well in such a situation.

Pros: I can't think of any.

Cons: Perfect nursery of fungi and insects because it's difficult to reach the middle of the "bed" to control them. Low ventilation and high humidity through crammed plants brings all kinds of pests sooner rather than later.

Not the answer you're looking for? Browse other questions tagged flowers raised-beds container-gardening or ask your own question.

16
How should I build a raised garden bed?
9
Cement Blocks for Raised Bed?
3
Help me decide in a location for my raised bed garden
0
How to minimize rot when building raised bed from sleepers?
0
Raised bed pure horse manure compost
0
Raised beds vs containers in greenhouse?
1
Raised Bed Cover Crops - Zone 6
4
De-weeding a raised bed