I bought a little rosemary tree pot plant from Lowe's and it was doing really great here in Austin. All of a sudden with the sudden dropping temp and actual winter, I brought her inside and tried bringing it in and out. But it slowly over time turned brown. Despite being watered when needed, the leaves dried up and falling off. Will it spring back new growth in the spring time?

Rosemary is hardy down to between -10 to - 05 deg.C; in a pot, its a bit more vulnerable, so -5 C is probably best. That is around 23 deg F,though shortlived exposure to 14 deg F would be fine. Every time you lift it into a heated environment, then put it back outside, then bring it in again, it suffers transition shock. These plants do not do well for any length of time in heated homes, so that and the transition shock are likely causes for its going brown/dying. I think your USDA zone is 8b, which means your winter temperatures are somewhere between 15 and 20 deg F, so unless you're having an exceptionally cold period, the Rosemary plant would have been better off left outdoors, in as sheltered and sunny a spot as possible, with some extra insulation round the pot, then moved to somewhere frost free but unheated if the temperatures are exceptionally cold (below 15).

It may already be dead, hard to say,but if you can find somewhere frost free but unheated, or a cool, bright room, where it might receive bright daylight/sunlight if there's any around, then it may produce new growth off the roots next spring or over winter.

Looks like a case of poor drainage to me, coupled with your moving it into and out of the house, as Bamboo noted. If you bought it at Lowe's, did you repot it?

I've grown rosemary indoors in a heated room for something like 20 years now, with very little direct sunlight (east windows only). I've lost a few over the years, with only one of my deceased plants dying from overwatering - the rest dried out too much and never came back (usually during vacations). The one I over-watered had poor potting soil; the leaves turned black at the tips before wilting and going brown.

You do NOT have to grow rosemary in an unheated room - they take forced air heat just fine. I leave mine indoors all year.

Rosemary likes very well drained soil and dislikes sitting in water. I highly doubt that your lack of sunshine is the cause (it's very cloudy here in Wisconsin most winters, and as noted, my plants get very little direct sunlight anyway).

If you want to try again, repot whatever plant you buy into a very free-draining potting soil (lots of perlite helps), keep in an east window during the winter, and move it outside early in your spring, keeping it in the shade at first and then gradually moving it into the sun over a period of a week or so. I water mine when the pot feels light when I pick it up, not when the top of the soil dries out.

The Rosemary plant are of Mediterranean origin so biologically not able to cope with a winter. If you managed to get it in before the chill killed it, then the alternative is that you've over watered it.

I suggest removing from the pot to inspect the roots to see if they're all mush or not. If not, it might have a chance of surviving but I doubt it.

My rosemary plant was almost dead from an inadvertent lack of watering with only some tips of green, but since they're drought tolerant it's springing back to life in my summer. 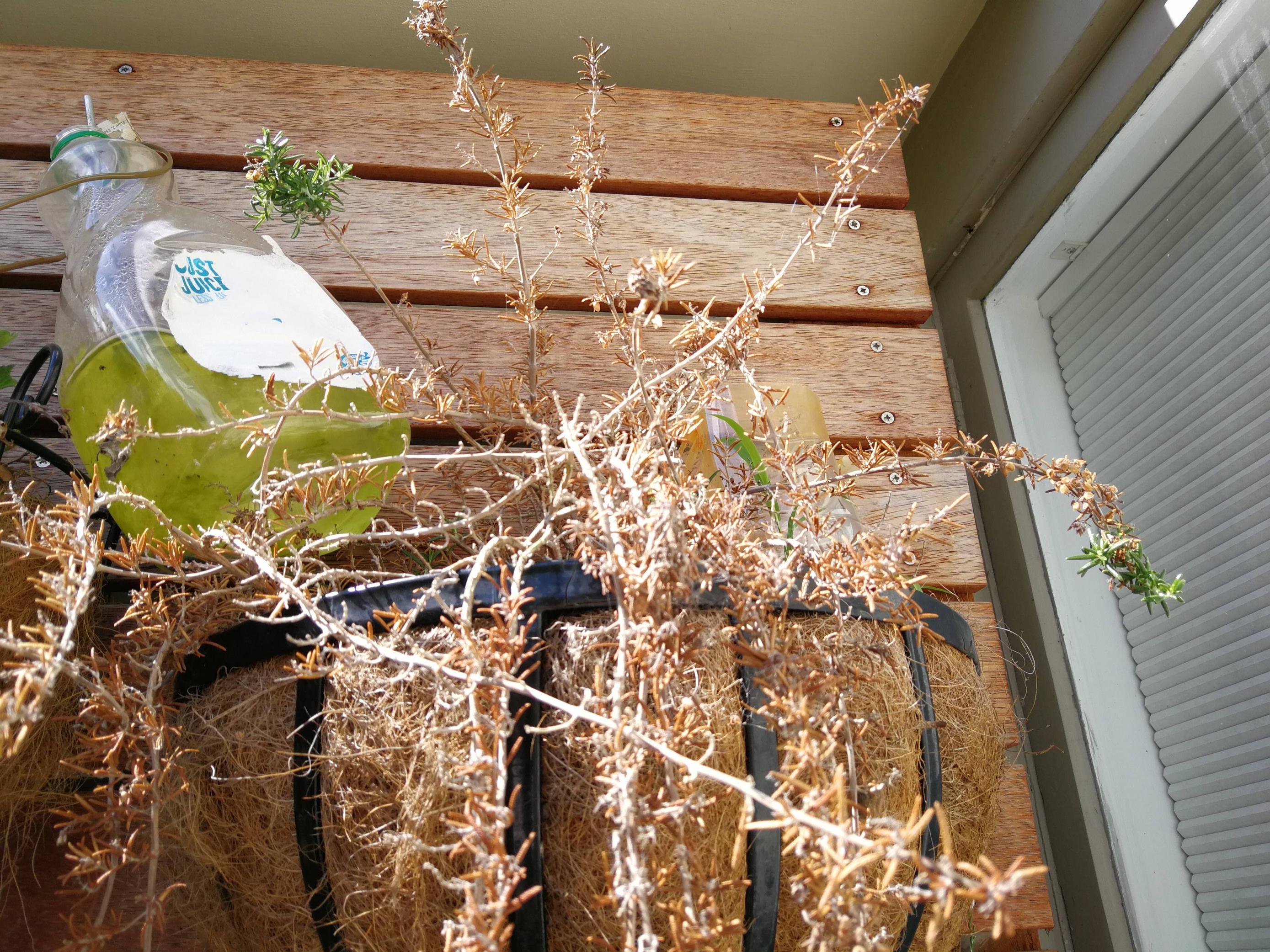