Can biochar be created effectively in a cast iron bath?

I'm interested in making some biochar for my garden. I don't really want to pay an metal engineer to make an expensive Kon-Tiki Kiln, or even a much easier Pyramidal Kiln, and I don't have the energy to dig a 2 m diameter soil pit that are used traditionally in my hard clay. 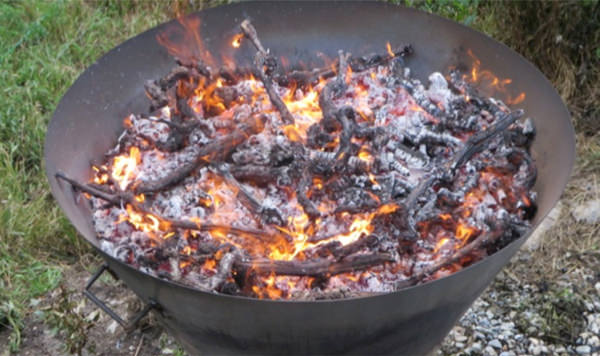 Kon-Tiki design showing the flame vortex on the right - the wood well beneath the vortex undergoes pyrolysis as the oxygen is consumed at the top. 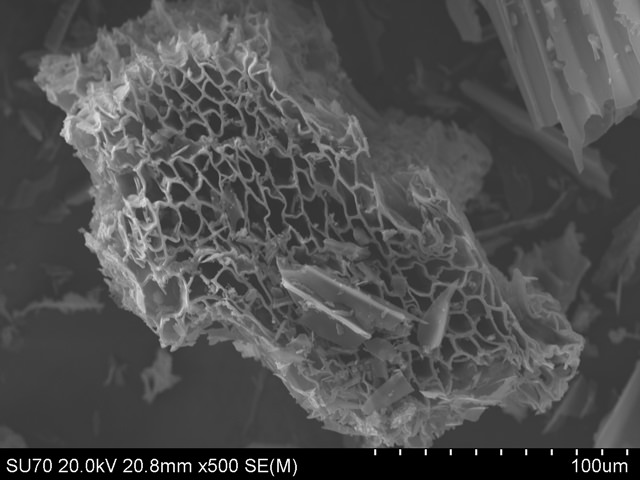 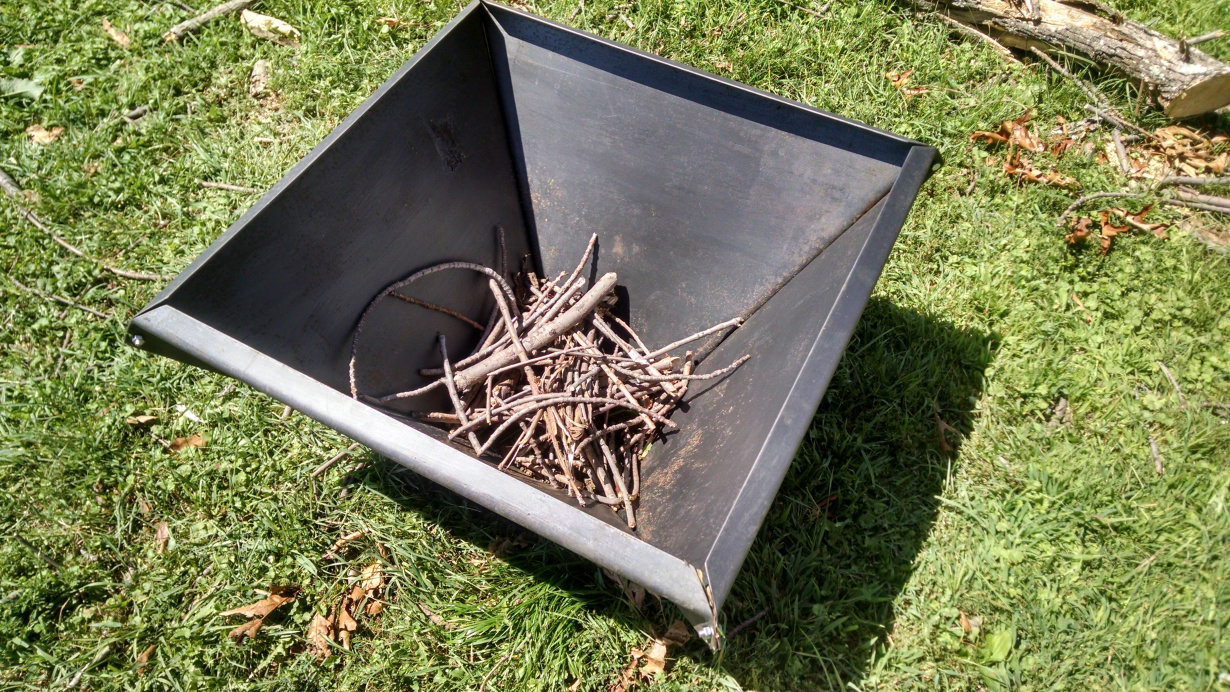 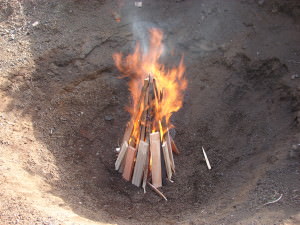 I've seen a new design, the Warm Heart Kiln which is defined as above ground Flame Curtain units with a non-square, rectangular top aspect. 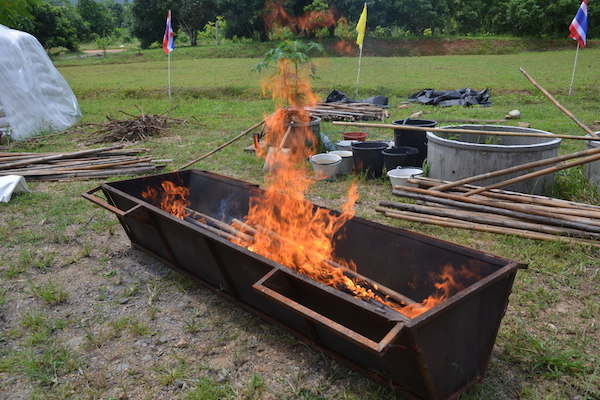 Warm heart kiln ( not my bath, not my property )

But that looks a little like a bigger version of an old cast iron bath. And I have a spare one that I was going to use as a raised bed.

So, can I use a bath to make biochar? This way I can dispose of biological waste from the garden and amend the soil for potentially 100s of years while storing carbon in the ground.

This is not a subject I know much about, but I've been doing a bit of research, because, as one of the comments points out, that open trough showing burning wood also struck me as absolutely not the way to produce biochar. If part of your purpose is to lock up carbon (I'm assuming from an environmental point of view as much as anything) then that open burning trough will be emitting methane and CO2 into the air as it burns, and there's too much oxygen availability for the stuff that's burning, which means you're likely to get ash rather than biochar. In many parts of the world, people create and use biochar as a fertilizer, but its usually produced in a low tech way by digging a more or less cone shaped hole in the ground, with the materials piled into it, rather than a wide, open trough. Which would mean your bath is not a suitable receptacle for such a purpose either.

I found this https://youtu.be/svNg5w7WY0k to be particularly interesting, because its a way of producing good biochar without emitting gases and smoke into the air - those gases are subsumed as the wood inside the drums 'cooks' rather than burns. Using two drums, one inside the other, with lids and a chimney of sorts is nothing like using an open bath or trough, obviously, and seems to be a much more effective and environmentally friendly way of producing good biochar.

In terms of use as a fertilizer, you probably already know there are various videos on Youtube, including some Ted talks - one of them uses scientific testing to determine whether using biochar makes any difference to nutrient levels in soil,and ultimately, whether it makes any difference to nutrient levels in food plants grown in that soil. Tests show that properly prepared, activated biochar does increase some (but not all) nutrient levels in soil https://youtu.be/AOgbO1uSaFU and does prevent leaching of those particular elements, but, if the soil in which the crops are grown is already nutrient dense (organic materials already being present) then there is no increase in the nutrient levels in the foods grown, though there may well be if the soil is poor prior to the addition of biochar.

However, I'm inclined to agree with another answer that it's much better to largely use unburnt organic material to keep the soil in good condition, rather than deliberately burning materials in hopes that will be even better - I can't help noticing the similarity between the rise in popularity of biochar and that of coffee grounds; the latter, in the last ten years, have been recommended as a fertilizer for soil and acquired a fad status, but that's just what it is, a fad, because coffee grounds are not a fantastic fertilizer for any soil/plant. I well recall a 'gardening expert' in the UK, actually a botanist, singing the praises of coffee grounds - two years later, he confessed that all the houseplants to which he'd liberally applied coffee grounds had died, so withdrew his recommendation. Biochar may well just be another fad which, long term, and used immoderately, is also not a great idea.

An interesting subject on which I intend to do further research, so I'm glad you raised it, but essentially, no, I do not believe your bath is a suitable way to produce biochar because it will allow methane and Co2 to escape during the process, and would be much better used as a raised bed.

Since none of the users here has had any experience in this I decided to create my own.

I now need to create some compost tea or similar, and charge the charcoal to make it into biochar.

Edit: Since people have been commenting on whether bio-char is a useful product or not, I'm going to add this interesting study from 2016

Linking the Belowground Microbial Composition, Diversity and Activity to Soilborne Disease Suppression and Growth Promotion of Tomato Amended with Biochar

Biochar, in addition to sequestering carbon, ameliorating soil, and improving plant performance, can impact foliar and soilborne plant diseases. Nevertheless, the mechanisms associated with suppression of soilborne diseases and improved plant performances are not well understood. This study is designed to establish the relationships between biochar-induced changes in rhizosphere microbial community structure, taxonomic and functional diversity, and activity with soilborne disease suppression and enhanced plant performance in a comprehensive fashion. Biochar suppressed Fusarium crown and root-rot of tomato and simultaneously improved tomato plant growth and physiological parameters. Furthermore, biochar reduced Fusarium root colonization and survival in soil, and increased the culturable counts of several biocontrol and plant growth promoting microorganisms. Illumina sequencing analyses of 16S rRNA gene revealed substantial differences in rhizosphere bacterial taxonomical composition between biochar-amended and non-amended treatments. Moreover, biochar amendment caused a significant increase in microbial taxonomic and functional diversity, microbial activities and an overall shift in carbon-source utilization. High microbial taxonomic and functional diversity and activity in the rhizosphere has been previously associated with suppression of diseases caused by soilborne pathogens and with plant growth promotion, and may collectively explain the significant reduction of disease and improvement in plant performance observed in the presence of biochar.

Were I to try this (I have a sheet steel bath I could use that's currently just sitting) I'd not use any of those approaches, as they all seem terribly inefficient at charcoal production, being open-air, with the heat on the wrong side. Yup, you get some char, but not nearly what you can get with a closed retort.

Add a metal sheet over the top, support the bath on some bricks, connect a pipe to the drain running underneath with holes drilled in it. Fill tub with wood. Build a fire under the tub. As the wood in the tub heats, gases will come out the pipe. After enough of the moisture has boiled out, those gases will burn, and you can stop feeding the fire under the tub as the flames from the pipe will finish the job.

This can be improved/finessed by enclosing the tub to contain the heat from the fires. It also works with a closed metal drum, rather than a tub. The material in the closed vessel is never exposed to oxygen, so you burn off all the non-carbon bits and are left with all the charcoal from the wood you put in there, without burning any of that charcoal. The wood outside is just for the initial heat and provides no significant charcoal.

I've learned that burning, ash and charcoal do little or nothing for the soil. That is why they stopped the burning of fields. Added too much smoke, did nothing at all for the soil. The attributes of this stuff are about as good as aquarium gravel. Gravel, rock, gypsum does nothing for the tilth of soil. The ONLY way to improve any and all soils is to dump decomposed organic matter on top of the soil. No sand, no gravel, no charcoal. Just not worth your time. To add for better tilth is to do cover crops. Slight tilling. Tilling at the beginning and maybe every other year slightly. Mostly the addition of decomposed organic matter to the surface. That is the only way to improve soil.

Use this lovely iron POT but know that you are growing and dealing with potted plants. Not plants in the garden soil. Make dang sure there are holes and the bottom is raised off the ground. There is most certainly a threshold for available iron. I would not use anything other than sterilized potting soil at the beginning.

I would also be checking on this beautiful pot every day to decipher the needs of the plants.

Edit: Interesting stuff but found one that goes with my initial reaction. If it seems to good to be true then it most certainly doesn't exist. Something like that?biochar 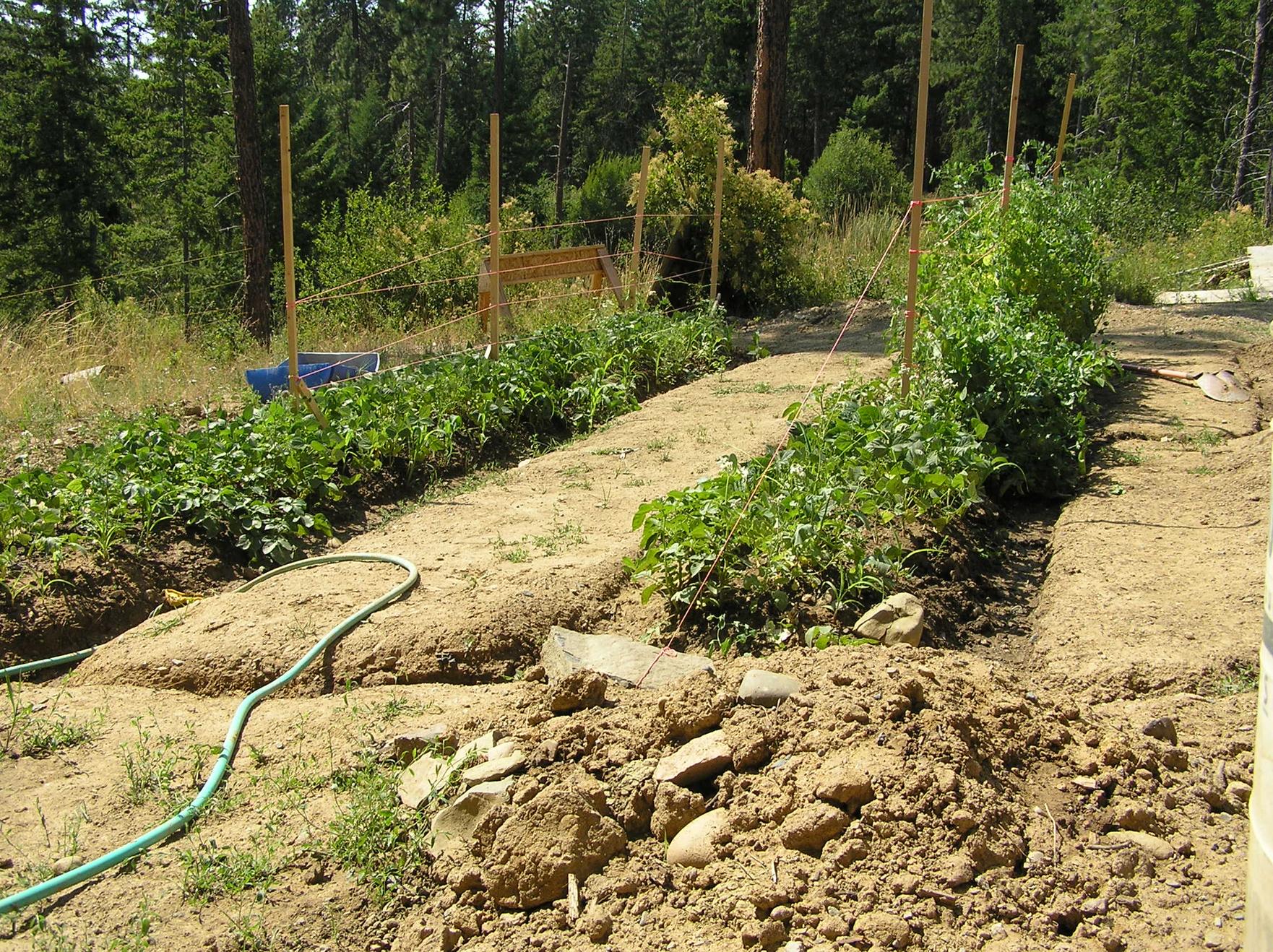 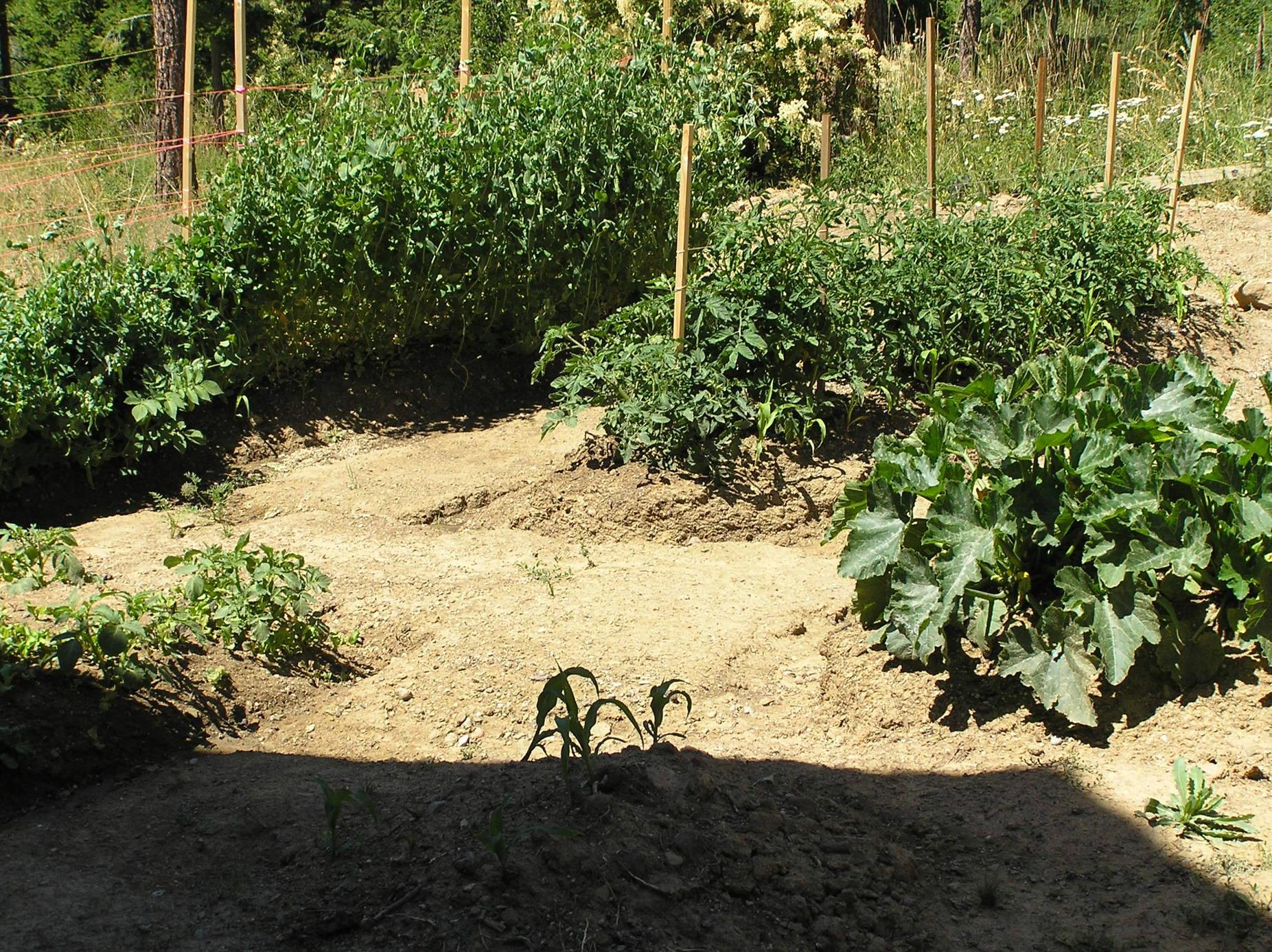 Hello to all on this topic. Rather than argue or make claims to and about the above comments, may I suggest to look at the huge amount of work done and in progress by the people involved with the Ithaka Institute, the Biochar Journal, by backyard Biochar, and also may I suggest my own website: http://www.terrapretadevelopments.com.au . You may also like to check out the Facebook site of FRANK's CHAR Tasmania. In short, the retort kilns can technically be combined with various flame curtain kiln designs. For example, there are developments of stationary thermal energy utilisation via heat exchange devices above the cone kilns. The whole subject is very multifaceted / multi-dimensional rather that narrow focused or mono-cultural. The bathtub method will work very well as long as the person in charge of the operation (the charmaster) knows how to optimise the carbonisation process. We design, use and sell deep cone / flame curtain kilns and the fact that this deep cone - flame curtain method is now used in well over 70 countries (within about 3 years) tells the story that it works very efficient and well when people understand what they are doing, why, what and how... Biochar, Feedchar, Constructionchars, and specialised Designerchars are about proper developments, not simplistic quick fixes. May I end this first response with a link to Kathleen Draper's excellent article: https://www.biochar-journal.org/en/ct/85 Good work in progress. Have a great weekend people, wherever you are. Best regards from under Down Under in Tasmania @ ~ 28°C this weekend

Not the answer you're looking for? Browse other questions tagged soil-amendment or ask your own question.