I planted a Magnolia grandiflora 'Kay Paris' in a corten steel container. It was bought as a 100L container. It’s now looking a bit ill or stressed, after about a month. I have clay soil, so tree was planted with potting mix that has gypsum. Looking for advice on how to revive. 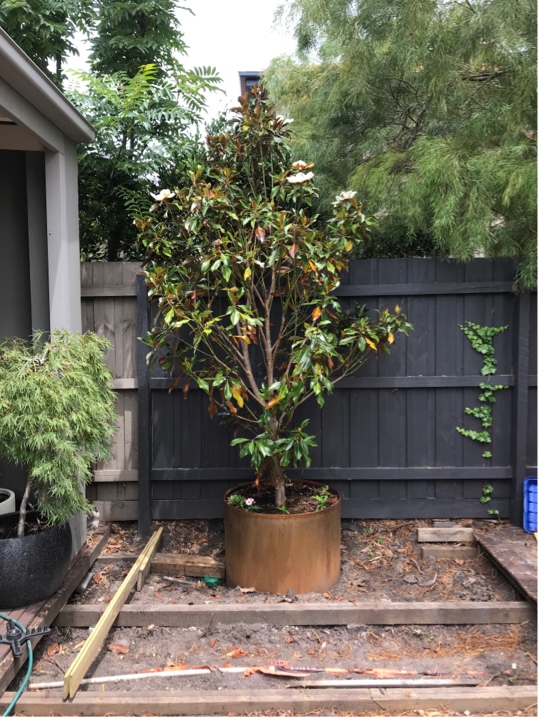 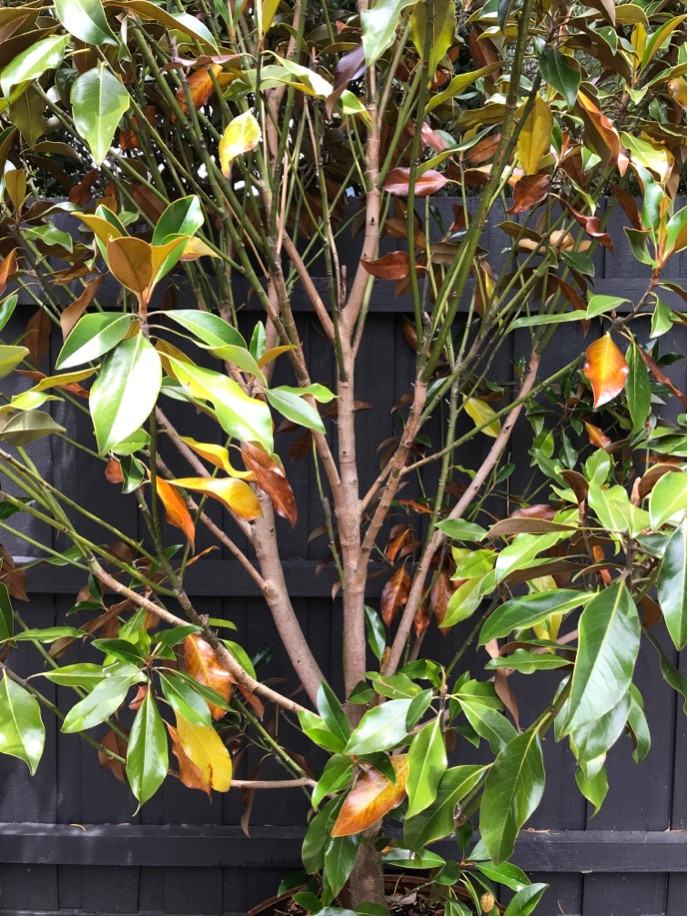 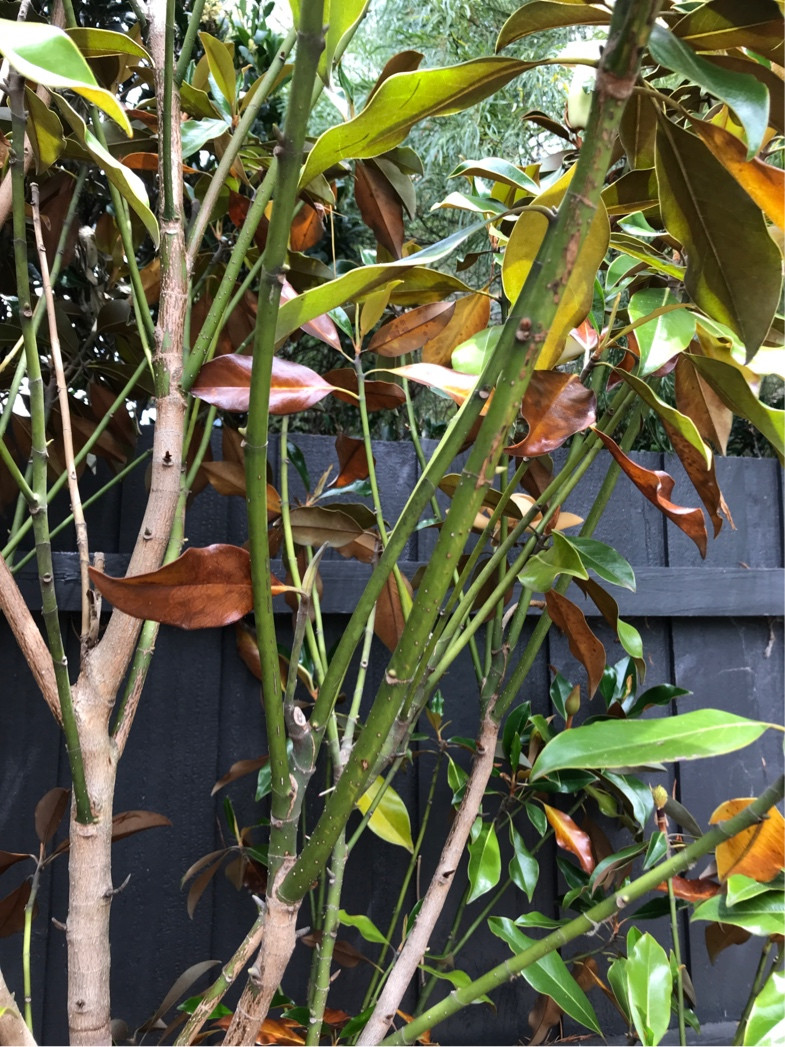 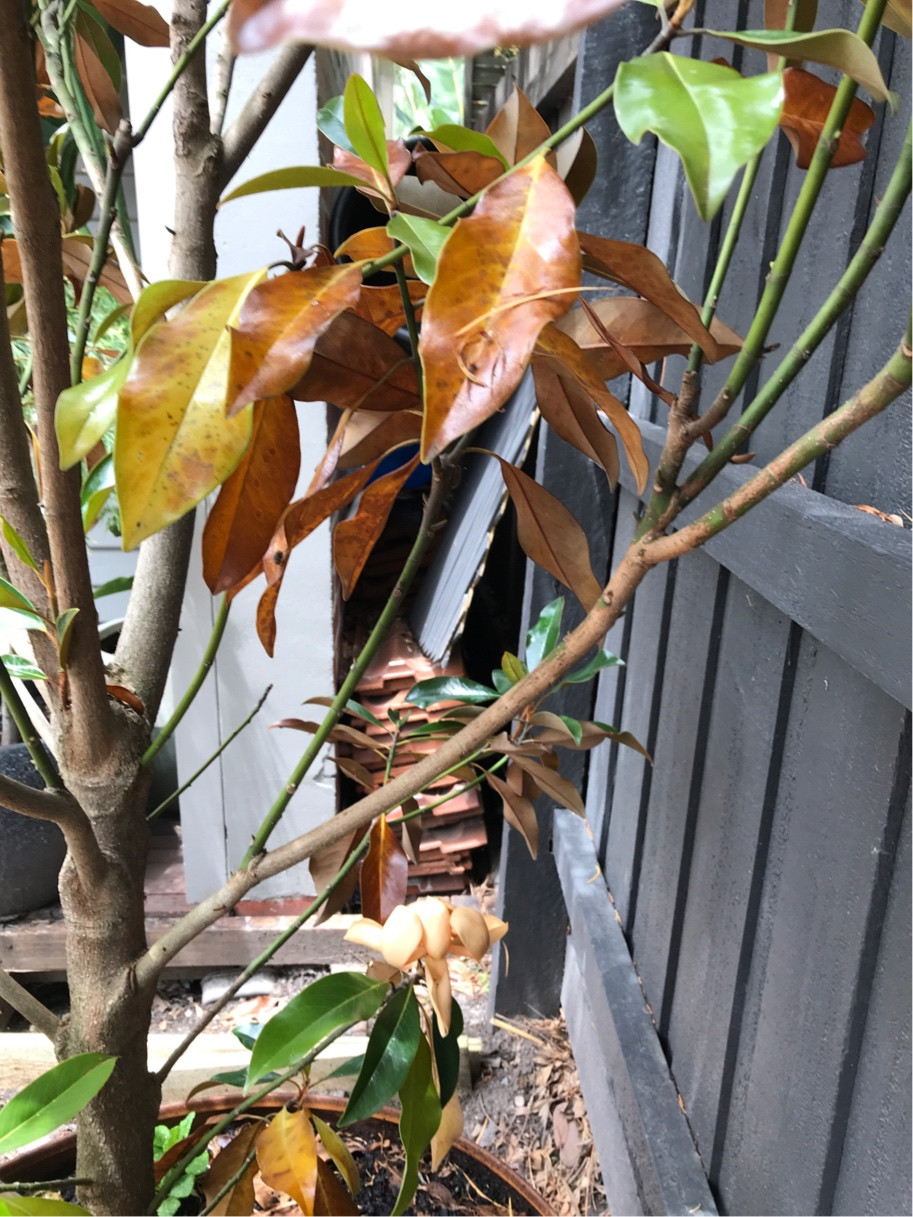 You've clarified that you did not use potting mix, you used soil with added gypsum, and that the pot you've used is open at the bottom. That added information points to more than one possible problem.

First, if the pot is open at the bottom, and you did not dig over the soil beneath first, either the plant in the bottomless pot cannot take up sufficient water before it disappears straight out the bottom, or the water collects at the base of the rootball because the clay soil is solid and cannot drain away.

Second, the soil plus gypsum you used is not intended for use in pots, it's intended to be used in open ground, in particular where there is already a calcium shortage, or too much salt in the soil (usually in coastal regions). Gypsum can burn plant roots, depending on how much has been used, and if the soil mix wasn't sterile, it could contain some pathogens, again not intended to be contained in a pot. Whilst harmless in open ground, some pathogens present may well cause trouble in a pot.

The best way to improve clay soil, open it up and make it more free draining is to use organic material, such as composted manure, good garden compost, and so on, along with some horticultural or washed grit. Gypsum may have a temporary (up to 2 months) effect on the clay, making it more 'open', but it is not usually applied round plant roots in sufficient quantity to have this effect because of the risk of root burn. If it is used around growing plants, it's in small quantities and usually to temporarily correct a calcium shortage. There is, though, some evidence that suggests using gypsum disrupts the established mycorrhizal system around plant roots, which is not good for the health of the plant.

Magnolias dislike root disturbance, but in the circumstances, if you want to save the plant, it's probably best to decant it from its current container, remove as much of the soil you used as possible, and pot into something with drainage holes big enough to accommodate the rootball, using proper potting soil. If the rootball is soaking wet, it shouldn't really be watered, but in order to more quickly remove and flush through any traces of gypsum, it might be wise to do so anyway; if it's not sodden, then give it a good soaking, allowing excess water to drain away freely from the base of the pot. Ongoing, keep it watered as necessary, in hopes that the plant will not get worse than it is now, and may recover.

Note also that clay soil per se is not necessarily bad for magnolia - so long as the ph is neutral to slightly acid, and the soil is fertile, having a high clay content isn't a major issue.

Simon, any plant in a pot should be planted in sterilized potting soil. My question is why didn't you plant this tree in the ground right where it is? You will not be dragging this guy in and out for the winter, right? Being kept in a pot is very different from being planted in the garden. Your tree is suffering from...sporadic dry events, no fertilizer? I would plant him right in that spot during its dormant season. When is that season for you? Did you know clay, gypsum, lime, gravel, sand, water and rotation makes concrete? Your tree is still alive. I would most certainly move him over or decide the best place to plant during the dormant season. Roots are the most vulnerable part of the plant. Undergroundin the garden protects roots, in a pot those roots are subject to cold (and heat).

Dig a hole no deeper than the rootball...the distance from the bottom to the top of the roots. That bark has to stay out of the soil. Digging below the the subsoil this root ball will sit upon will cause the root ball to sink, the bark to be compromised by moisture, killing your tree later.

Add nothing to the soil. Later you will have to add fertilizer. I would add Mycorrhizae fungus when transplanting to aid your tree to develop roots and uptake water/chemicals. Otherwise, do not amend the soil at all.

You do not want to keep this tree in a pot. If this is garden soil with gypsum, turn the tree and pot on its side. This spot looks a bit close to your home. When is the dormant season where you live? Most trees like this are grown in clay to keep their root ball compact. You want to plant this tree in similar soil, in clay. Chose a better spot, dig the hole and then tilt, slide this pot or metal off and gently put you tree in the hole. I'd install a few 3 to 4" pvc pipes with drilled holes along the side to help ensure water to the roots.

More information, please, this tree is on its last legs.

Not the answer you're looking for? Browse other questions tagged trees plant-health tree-care planting magnolia or ask your own question.

15
Why do my newly planted arborvitae keep dying?
9
Dwarf Apple tree in heavy clay
4
How do I perk up a Gray Oak I just planted whose leaves are turning yellow and brown?
5
What is wrong with this magnolia?
4
Droopy peace lily
5
Planting magnolia tree a little 'high'
3
Maple leaves look rough
2
A relocating friend gave me their potted fig tree which is now thriving in my ground - but no flowers or fruit!