What's this green stuff on my soil?

I dumped my french press on this potted fig tree a few times, perhaps that was a mistake. Today I noticed this this green stuff on top of the soil. What is this? 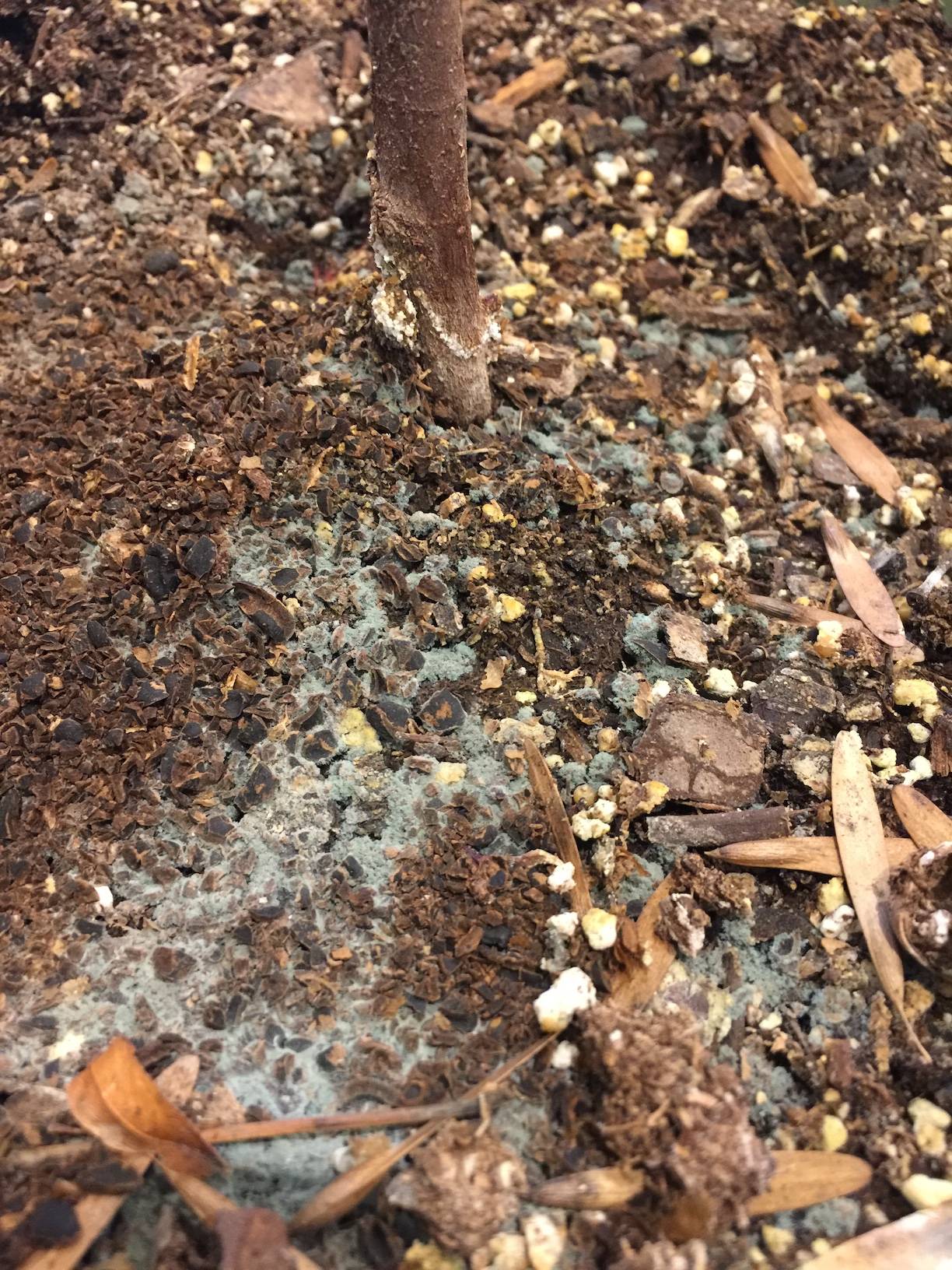 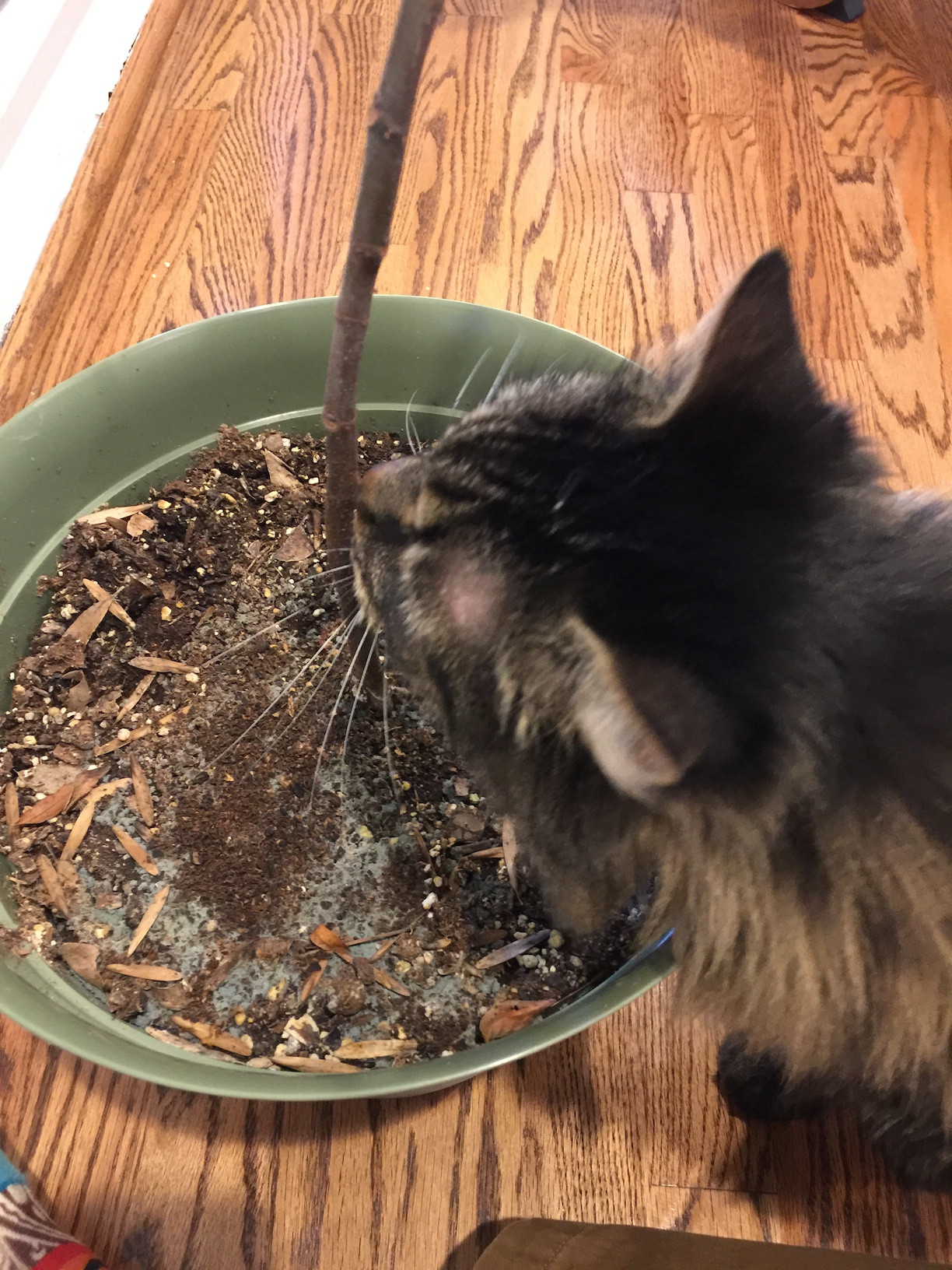 That is fungus growing on your coffee grounds, your cat seems to like it. I am not sure if it is wise to put coffee grounds in your (indoor) plant pots. I have read that it is okay for outdoors garden soils, but I would compost it first in a compost heap or container.

You probably don't want to have fungus growing in your living room, see other post and discussion there about fungus in plant pots.

Whenever new non decomposed mulch (coffee grounds) is added to the top of the soil, if there is fungus in the soil or air you will see a fungal bloom. All you have to do is scratch up the surface, the surface soil dries out and the fungus goes dormant. There are more than one type of fungus that will bloom on the top of the soil.

This usually happens in garden soil that comes with all kinds of of dormant and live fungi. One sees this happen most often in ornamental plant beds where a mulch has been added and hasn't been raked for awhile. Is this potting soil out of a bag? Or is there garden soil or barn compost mixed in?

I do see a problem that you haven't noticed and that is the bark on the little trunk is buried a bit too low in the soil and is starting to decompose as well. Pull the soil away from your trunk until you see the tops of the roots. Roots under the surface, bark always above the surface.

There are benign fungi, symbiotic fungi, detrimental fungi...in all soils. Mycorrhizae fungi is highly symbiotic and we put the spores of this fungi in the soil to boost plant's resilience. Botrytis spores are in the air. Something dies and there is enough moisture, botrytis will be one of the first decomposers.

Fungus is an important part of life. Very few fungi species are bad guys. Fungus is necessary in natural ecosystems. Fungus will have few natural controls in our artificial human made gardens. When fungus all of a sudden gets hit with material that is warm and moist and can be used for energy, it will 'bloom'. Another reason to always use sterilized potting soil for any potted plants; indoors, out of doors and greenhouses. Even when potting soil is used, there are fungal spores in the air that might find a home in that medium.

Take a fork and rake the top of your soil until it looks like soil again. 3 days later rake it again. You might have to do it another time but this 'raking' works well on any soil or mulch.

If this is the Fiddle leaf fig, that plant is not what you want your kitty to munch on. Very bad.

Excerpt From Beyond The Animal Brain: Plants also communicate with one another and other organisms, such as parasites and microbes, using a variety of channels – including ‘mycorrhizal networks’ of fungus that link up the root systems of multiple plants, like some kind of subterranean internet. Perhaps it’s not really so surprising, then, that plants learn and use memories for prediction and decision-making.

It looks like a trichoderma fungus. I see this commonly in my jars of grain that I am trying to cultivate mushrooms. Some trichoderma can be used to inoculate roots to protect against fungal infections, and others are the main forms of contamination when growing mushrooms. The spores are in the air and rapidly colonize a rich nitrogen source like coffee grounds. I'd suggest you compost those first.

Not the answer you're looking for? Browse other questions tagged soil fungus figs coffee-grounds or ask your own question.

4
Is there a way to kill the mold on soil surface in pots?

9
Is this weird glob of brownish stuff a fungus?
10
Is this an ant colony on this fig tree?
8
Is this fig tree disease or just malnourished?
4
Why are my figs dry inside and not ripening?
2
A relocating friend gave me their potted fig tree which is now thriving in my ground - but no flowers or fruit!
9
What are these small white balls that appeared on the soil in my greenhouse?
1
Green moss/fungus on the soil of my Pilea plant
0
Reusing soil with earthworms in pots?