Pinus pinea close to the house

How dangerous is to plant Pinus pinea 3m (10ft) from the house?

The house has only one floor, so I gather the crown will not interfere with walls and roof.

The situation would be similar to the one pictured here: 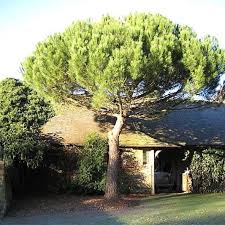 I don't know that I'd consider it dangerous to plant the tree that close, but from a design perspective I wouldn't do it with any large tree - the tree will eventually dwarf the house and the effect will not be pleasing to the eye. Seeing that the tree is also a pine, I'm assuming that as the tree grows it will become wide enough to probably interfere with access to the outside of the house itself unless you prune the lower limbs (perhaps this species, which I'm not familiar with, is different in that respect?). That's just added maintenance which is easy to avoid by moving the tree farther from the house, if that's possible with your site.

Pines also drop needles, of course, annually and you'll either have to clean your rain gutters fairly regularly or clean off the leaf-guards that may be on top of the gutters (needles are notorious for piling up on leaf guards rather than rolling off of them). Again, more maintenance.

As you might guess, I'm REALLY into having a no-maintenance garden.

From a "danger" perspective, from what direction are the prevailing winds? Would it be possible at a (much) later date for the wind to blow a branch - or even break the tree off at the trunk - onto the house during a storm? I recently had two large, mostly dead ash trees (victims of Emerald Ash Borer) removed to the immediate west of my house because our storms come from the west and I didn't want a large branch to land on or pierce my roof.

Hello I planted 3 Pinus Pinea Stone (Umbrella) pines at a distance less than 2 meters of the walls of my house and I began to worry if the roots of these pines after 30 years when become big will wreak harm and bring down the house and for this reason I began to watch on GOOGLE STREET VIEW whole towns and villages in Italy and Greece where there these pines are so many ,at what distance are planted next to houses and saw that in many cases there was planted very close (no more than 2 meters ) from the fountations of the buildings (houses) and this fact soothed somewhat my mind. Anyway,I will not cut off or sow in another spot in my garden these so handsome Mediterranean trees -PINUS PINEA and they will stay where they are now planted -at a distance less than 2 meters from the walls of the house,for I want them to be exactly there. They are the most handsome ,most lovely kind of trees in the wolrd.I am from Bulgaria ,town of Lovech and hope that they will go well in the cold winters here.

Not the answer you're looking for? Browse other questions tagged planting roots pines or ask your own question.

14
How can I grow a pineapple plant from a store-bought pineapple?
12
How far will pine tree roots spread?
5
Where, when, and how can I plant magnolia trees?
5
Growing Pinus pinea in zone 8a - possible?
6
Any problems (plant health, structural longevity, etc?) with planting bamboo in a steel planter?
3
Using grass clippings for clearing the area of existing plants
3
How to grow purple yam from the grocery store?
3
Will cutting away root(s) of a tree growing under my basement floor kill it?
2
Will installing pavers help keep the soil cool around trees and shrubs?