This is in south India. I purchased a Tulsi plant around 3 months ago from a local seller who told me he also had medicines for plants if I ever needed them. I asked what medicine, and he didn't know. Approximately two weeks after bringing the plant home, there were some dark brown bugs crawling all over it and the leaves appeared to have powdery mildew. I sprayed a milk+water solution under bright sunlight for three days and the plant actually recovered. I also pruned off many leaves that had no chance of recovery. In a few days it sprouted fresh leaves all over.

However, a week or two later, I noticed very tiny red bugs (size around a quarter of a millimeter) crawling all over the leaves of the plant. This time, there also seemed to be some kind of tiny webs all over the stalks of the leaves. Leaves began turning brown, had some kind of white powdery substance on it and although the plant was constantly sprouting fresh leaves, the bugs and the 'disease' always caught up and devoured the leaves. The plant has and still is able to sprout fresh leaves though. The bugs seemed more abundant and visibly there during the rainy days. Now that the rain is gone, I don't see bugs, but the tiny brown blobs on the leaves shown in the first picture just might be them. I heard Tulsi needs direct sunlight, so it has been kept on a terrace where it gets morning and afternoon sunlight in plenty. 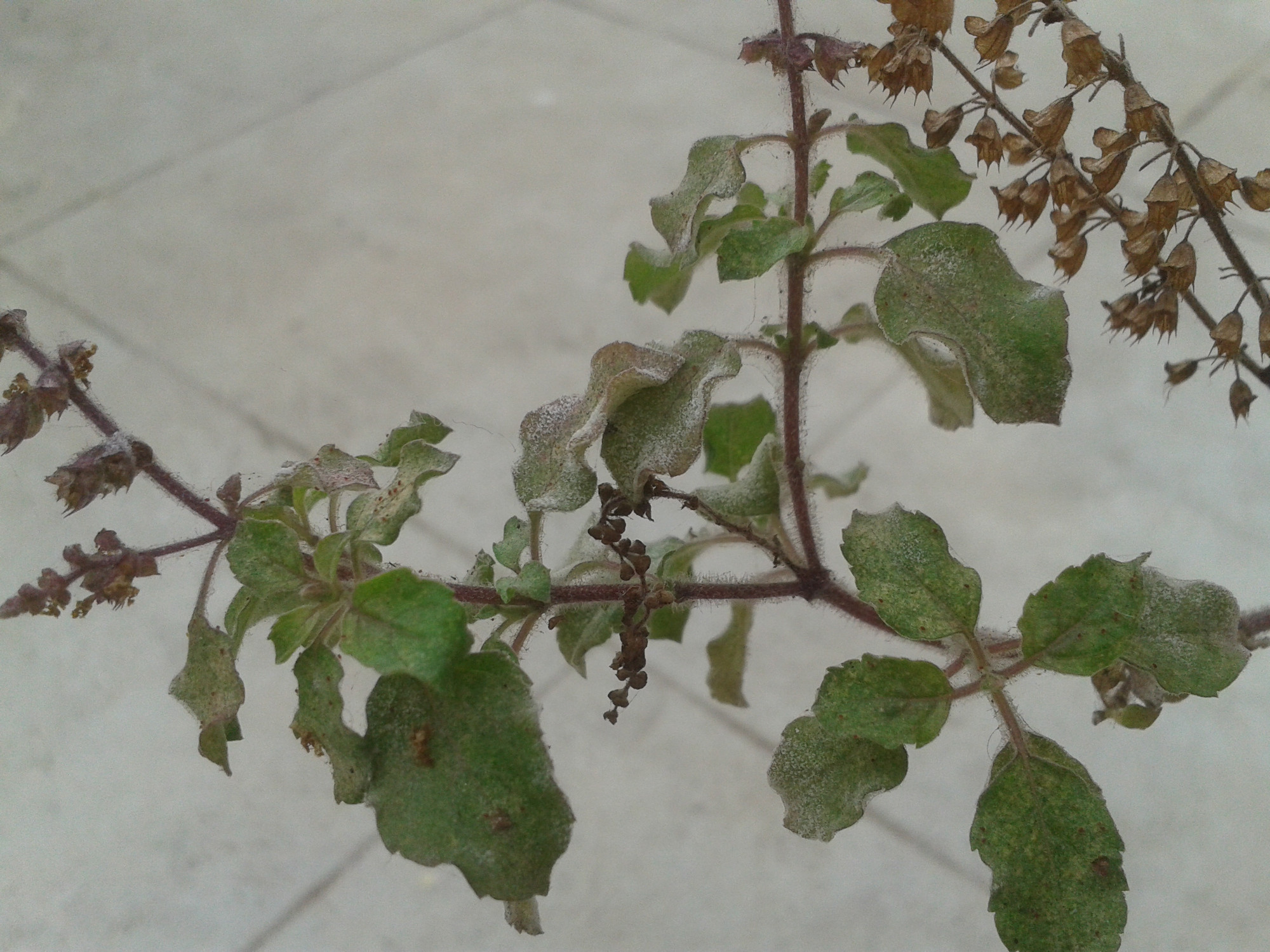 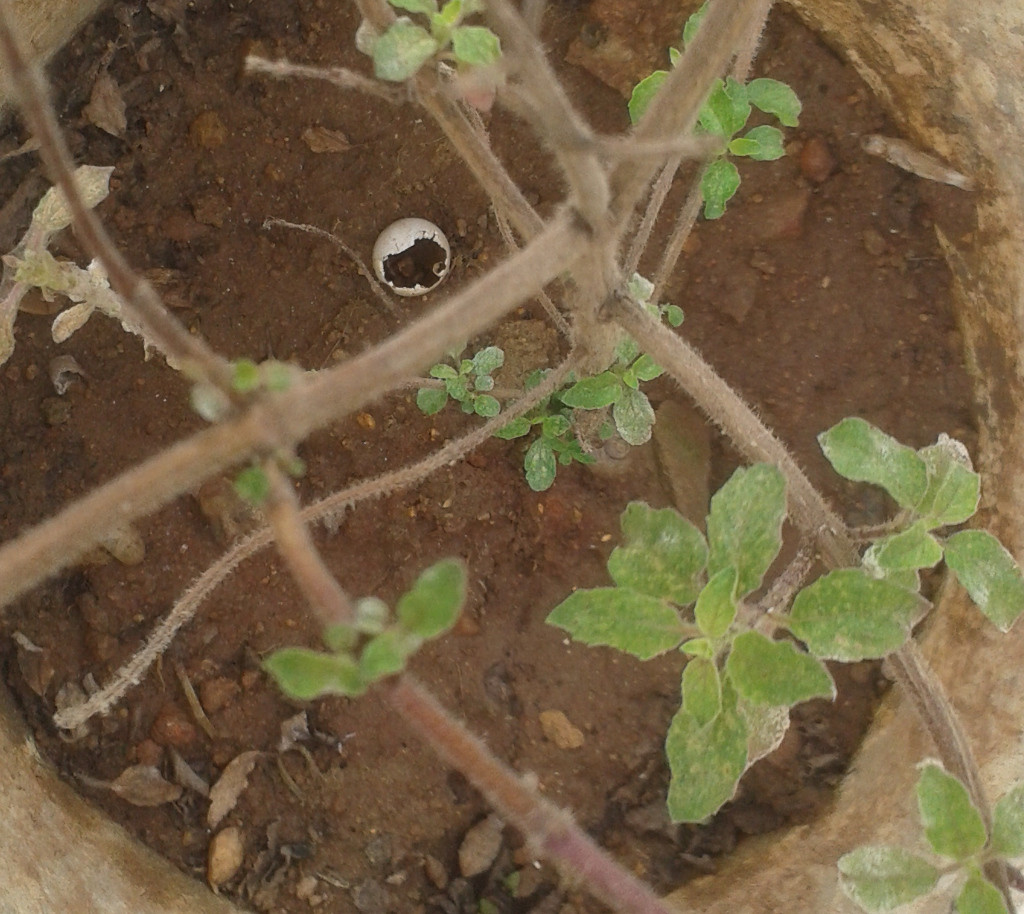 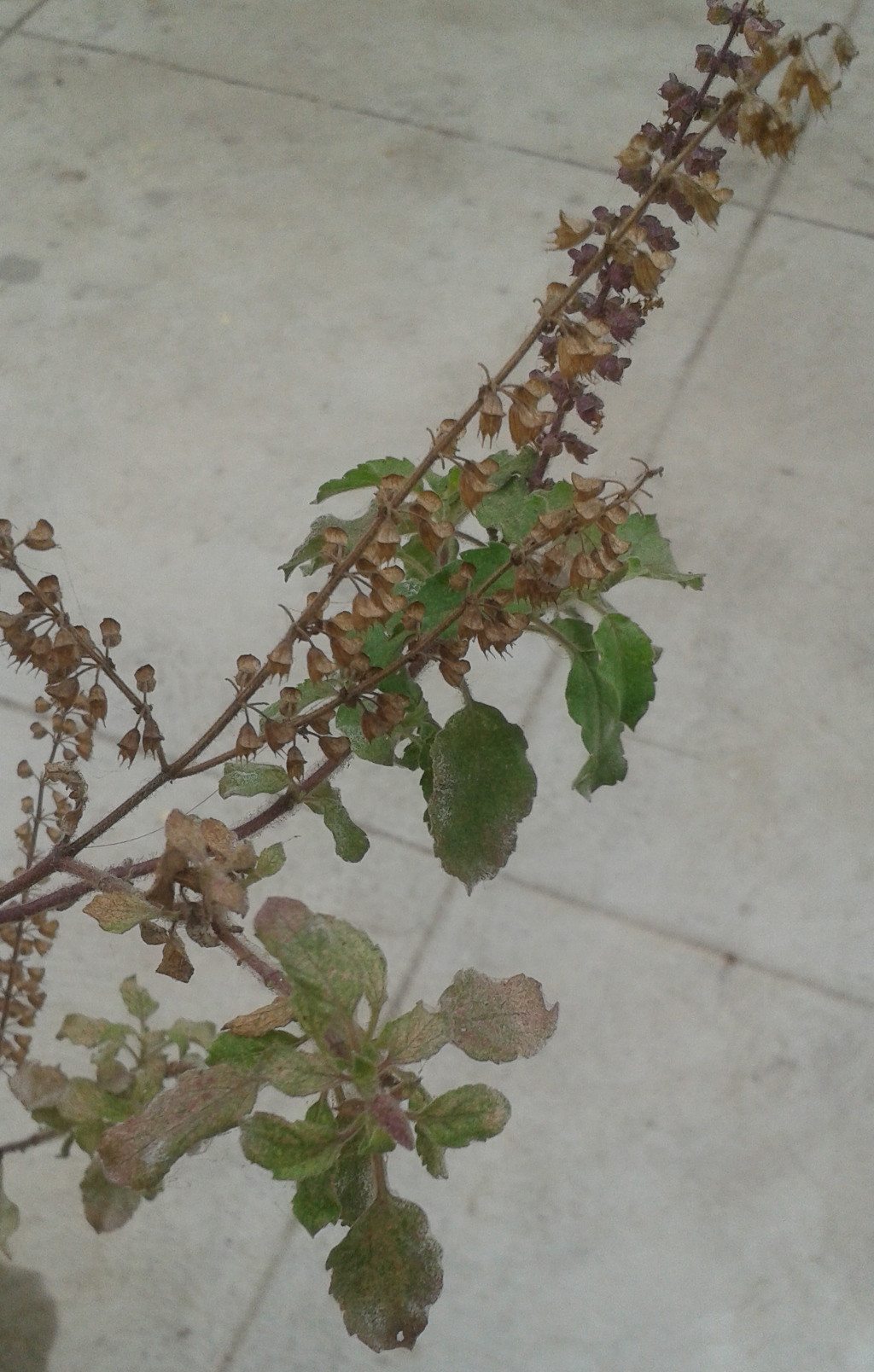 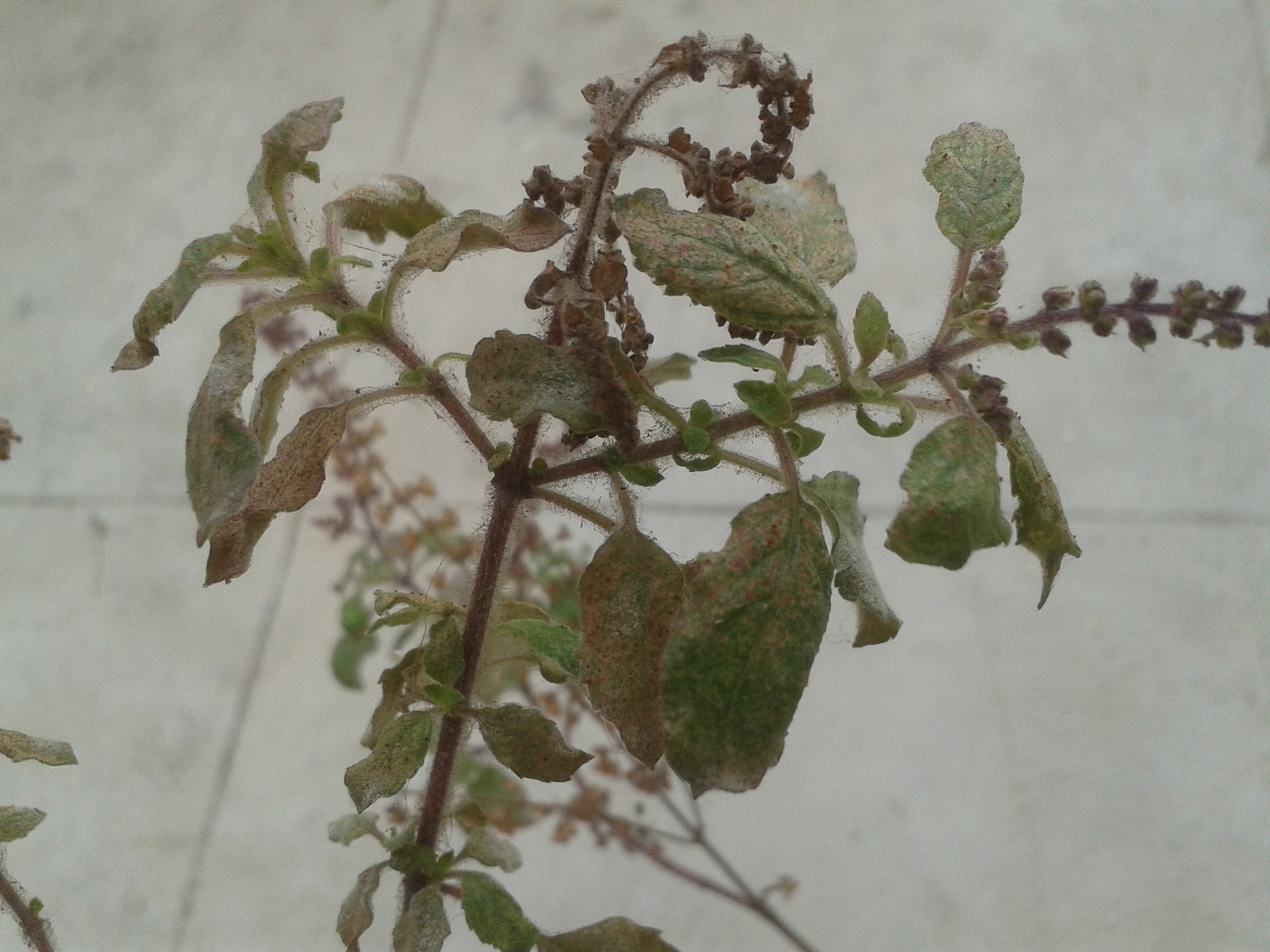 I don't want to go to the seller because I believe they may be running a scam where they sell plants which are already sick/disease-prone so that they can sell 'medicine' when gullible customers come back.

Questions:
1. Could anyone help identify what is wrong with the plant and how to fix it?
2. The plant has dropped seeds all around it. Would it be more advisable to kill the plant and grow saplings from the seeds? Or would they be prone to the same disease?
3. Does anyone know of any supposed chemical that such suspected scamsters could use to make plants seem healthy only as long as the chemical is used?

From your description, I would guess spider mites. They are very small and red. They leave a fine webbing on the plant and they turn the plant white-ish. Check with your local garden center to find out what chemicals are used in your area for mites. Generally, insecticidal soap, neem oil or botanical insecticides will work. They are not that hard to kill, they are good at hiding, though as you have discovered. You have to apply the chemical ALL OVER the plant. If you miss a spot they will be back.

Treat all the plants around this one too.

The white-ish parts will never recover; it is actually where the mite has pierced the plant.

Not the answer you're looking for? Browse other questions tagged diseases herbs or ask your own question.

2
Chilli Plant Bugs/Brown-Purple Staining
3
Is Aloysia with brown spots drinkable?
8
How to treat diseases and bugs on peach tree?
3
Why are my mint plants getting brown weak stem feels they are dying
2
Red Cordyline (Ti Plant) Curling Leaves, Spotted & browing- issue?
5
What is the powdery mildew and why are my cucumbers not growing beyond 1 inch?
3
I was wondering if my Chocolate Mint plant had some type of disease?
6
What are these raised brown sections on the backs of the leaves on my pear tree?
0
What is this white web-like, mold-like thing on the plant
3
Chrysanthemum flowers and buds turning brown and dying, leaves wilting and getting brown spots