Chilli plant - Why is my pruned stem still dying back?

I actually pruned this last autumn. So close to 6 months. It's still slowly dying back. I'm guessing it stalled over winter. Near the tip, a new bud was actually starting to grow.

Why is it still dying back and how do I stop it? 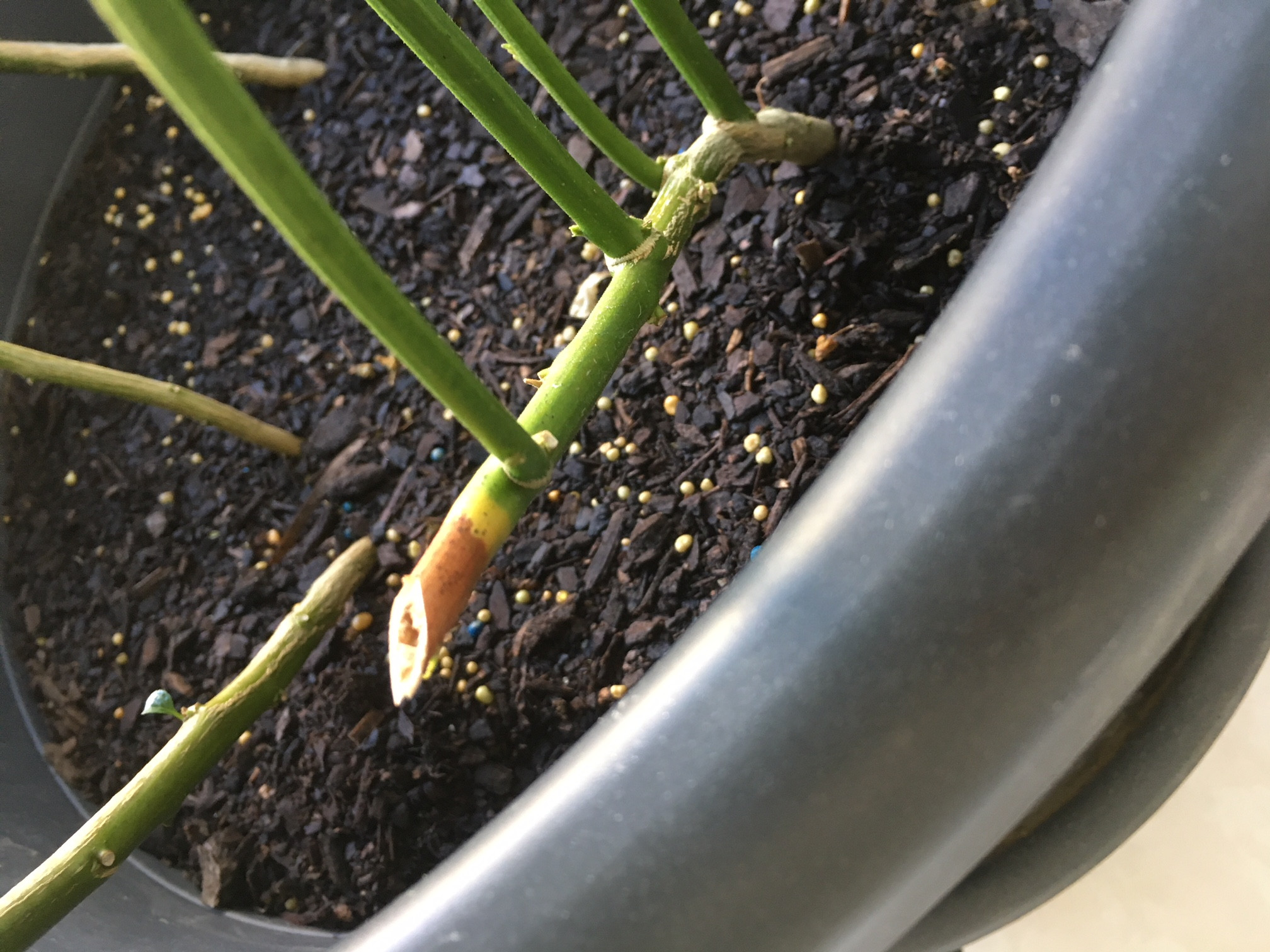 Cut back the stub to at least the next upward green stem now, beyond where its yellowing.

As to why it's happened, the usual explanation is that there wasn't a growth node or bud at the point you cut it back to, but that's not what you've said, you say there was a bud at the tip actually breaking into growth. In which case, something's happened, either to the bud or the previously cut end of that stem, and some die back has occurred. This is not particularly uncommon, it occurs on roses quite frequently in early spring, though usually without yellowing of the stem.

What occurred might be a little physical damage of some sort causing the bud to abort, or the cut you made previously was just a fraction too close to the new bud, but it's hard to be certain quite why the bud aborted itself - either way, cut back beyond the yellowed point, using clean and sharp secateurs. That area of stem is dying back anyway,and should be removed just in case there's some kind of bacterial or fungal activity there, but also because it's serving no useful purpose.

The rest of that part of the plant looks healthy, with growth breaking - I'd be inclined to cut back to the next part of the stem showing new growth rather than just nipping off the discoloured end, which might mean removing the first upward growing stem, I can't tell from the image.

Whenever a stem is cut leaving a stub with no leaves, excluding all photosynthetic ability, the plant will get rid of that worthless stub or anything that is not able to warrant being supported. Only vigorously healthy and photosynthesizing material will be supported by the plant. In pruning, one never allows 'stubs'. They are worthless to the plant. You could easily snip that stub to 1/8" of that live node. Totally natural occurrence, your plant is in no danger at all. If you left it alone, that stub would stop right at the node. All plants do this. The browning, yellowing will not go any further than that node. Unless there is a disease in place and there is no indication of that at all. Your stub is completely normal.

Not the answer you're looking for? Browse other questions tagged pruning chili or ask your own question.

5
How can I get more foliage and flowers on my rose?
4
How to encourage weeping cherry to grow larger
6
How can I stop removed branch stumps from spouting 'beards'?
2
Best way of pruning Cardinal Creeper
3
Fire Damaged Bay Tree (Laurus nobilis) - What to do?
4
My sunflowers are too tall (over 5') and butting into the top of my enclosed garden