What is the right plant for obscuring a neighbour's second story window?

I would like to obscure a neighbour's second story window, overlooking my deck (low deck, almost ground level).

I can plant a tree, but that means cutting into the deck, not to mention that the area is close to the house. So I've got a lot of requirements: Evergreen, tall (3 metres minimum), ideally low on fruit (decking mess), pretty (of-course) and grows in a pot. Whew!

I have found "Ficus microcarpa hillii ‘Flash’". Is this a tree that could grow large in a pot? Due to space, I can only fit in a small container, say 800x300x300cm, so I'm wondering if such a container will mean tree remains small...

On the assumption your measurements are in mm, not cm (300 cm is 3 metres and no container would be that wide), that would make your pot (in feet and inches) about two and a half feet deep by roughly a foot across, or 80 cm deep by 30 cm wide. The tree you've mentioned will grow in it for a while, but inevitably, over time, its growth will be very much constrained by the lack of root space, so although its impossible to say what height and spread it might reach, its safe to say it definitely won't reach 3m in height. After a while, it may start to look rather sick - most large plants are okay in largeish pots for up to 3, possibly 4 years, but after that, they start to look 'thin' and weak.

Any plant that can be expected to reach 3m won't do so in a pot, I'm afraid. Since your intention is to create something that blocks the view from a window above, have you considered some kind of small pergola, single or double row, with a pot either end of the size (but preferably larger) you mention, with perhaps a climbing plant in each, which, if the pergola is only 6 feet tall and a foot or two across at the top, might mean you could get some of the growth across the top? That would block the upstairs view of the area beneath, even though its not high enough to block their window. Or a shade sail similar to this https://www.primrose.co.uk/sail-shades-c-85.html which would have the same effect, though the effectiveness of these alternate solutions rather depends whether the neighbour's window is opposite your home, to the side, or directly above you.

My answer to this is classic potted Bamboo. Its the perfect screen, grows tall with a cool contemporary, beautiful aesthetic. I am a native New Zealander born and bred with no Asian bias to bamboo. If you could plant the bamboo in the earth I would recommend the bamboo species with the root system that clumps together and does not spread.

To me, it sounds like a better place to grow a vine than either bamboo (which I personally find to be very messy) or a tree. As @bamboo has pointed out, assuming you really do mean mm and not cm that's a pretty small pot for a tree 3m tall. At the very least you'd have to anchor the tree to some sort of support, as a post attached to the end of the deck.

I would recommend installing a trellis, perhaps with an arbor on top. Here are a couple of images from the web. 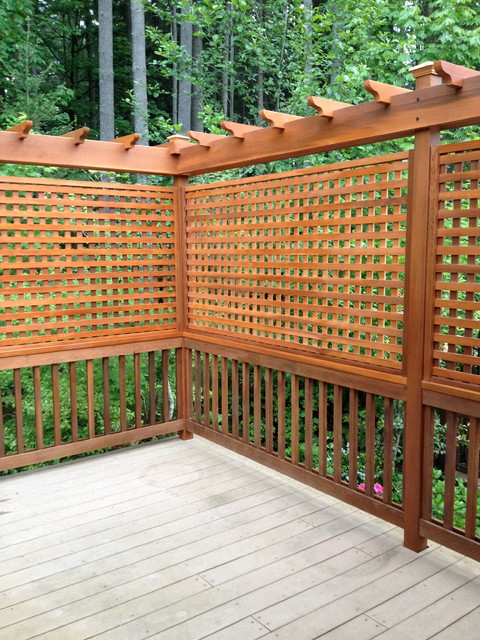 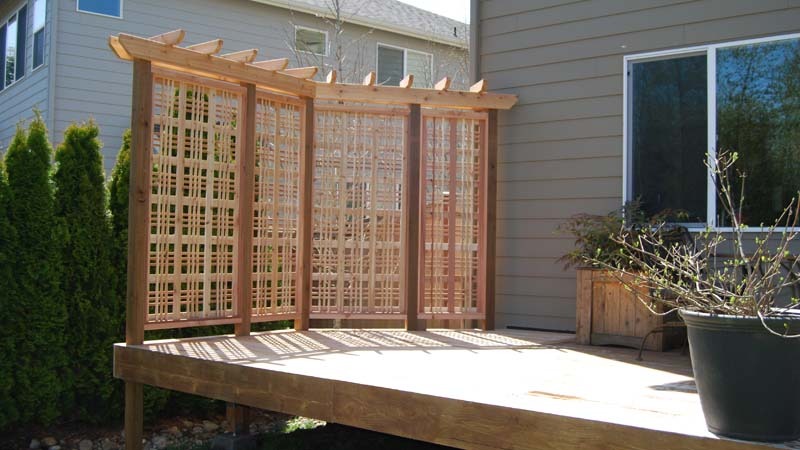 Please consult your local building code before installing a trellis as there may be limitations. Most places (at least in the US) make it pretty easy to ask simple code questions like this.

Not the answer you're looking for? Browse other questions tagged containers hedge ficus screening or ask your own question.

5
Water levels for Mint in a window box
8
What is a good shrub for privacy for the Pacific Northwest USA?
7
What's the best way to care for this damaged plant?
5
What is the best privacy hedge for the US northeast?
2
What is the optimal spacing for emerald green arborvitae?
4
What is the name of this potted plant with large, dark green, waxy-looking leaves?
3
Right container size for two eggplants together
7
What tool is most suitable for this task?
1
What is the crust growing on my ficus pot?
1
Caring for Ficus Starlight plant