How to deal with grapefruit holes

I've read that holes in grapefruits can be caused by birds or pack rats. However, my tree does not have the extent to be reachable by pack rats, and the holes do not look like bird holes. The tree itself is about 6 foot high and slightly wider in the middle. It looks like somebody drilled a hole with a drill about 3/8 inch or so in diameter. This is happening to every grapefruit around the time that it turns yellow. Another site claimed it could be insect damage, and added "insect damage of this type requires no control." I certainly disagree as without control every grapefruit is going to be ruined!

How can I deal with this problem?

Update: Here is a picture of what they typically look like. I didn't measure the depth of the whole but they seem to be between half an inch and one inch. In one case there was a large brown bruise-like ring and the interior hole had some kind of flying bugs in it. This particular one had no noticable bugs: 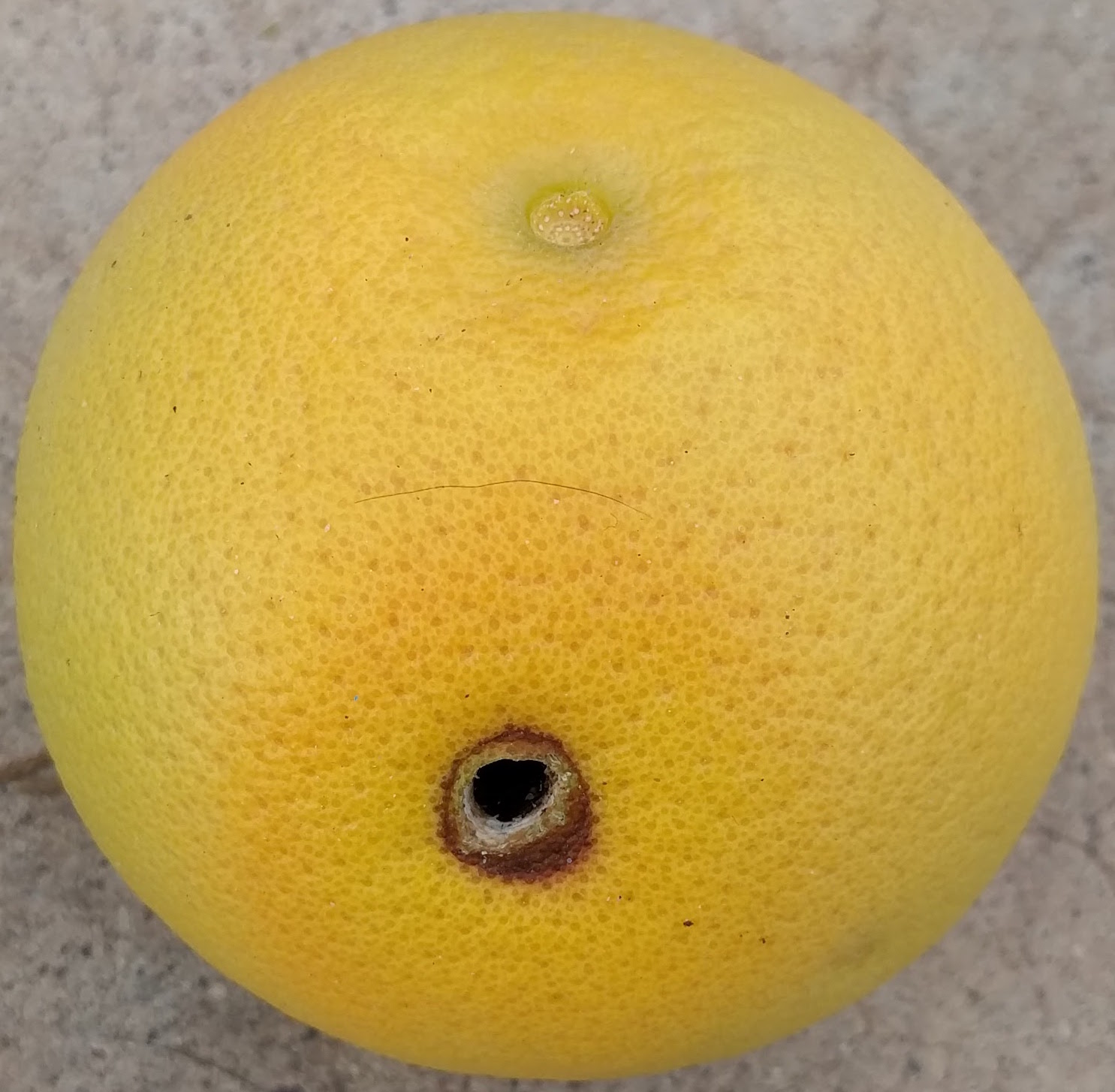 I also found this one which has a bit bigger hole but is not as deep: 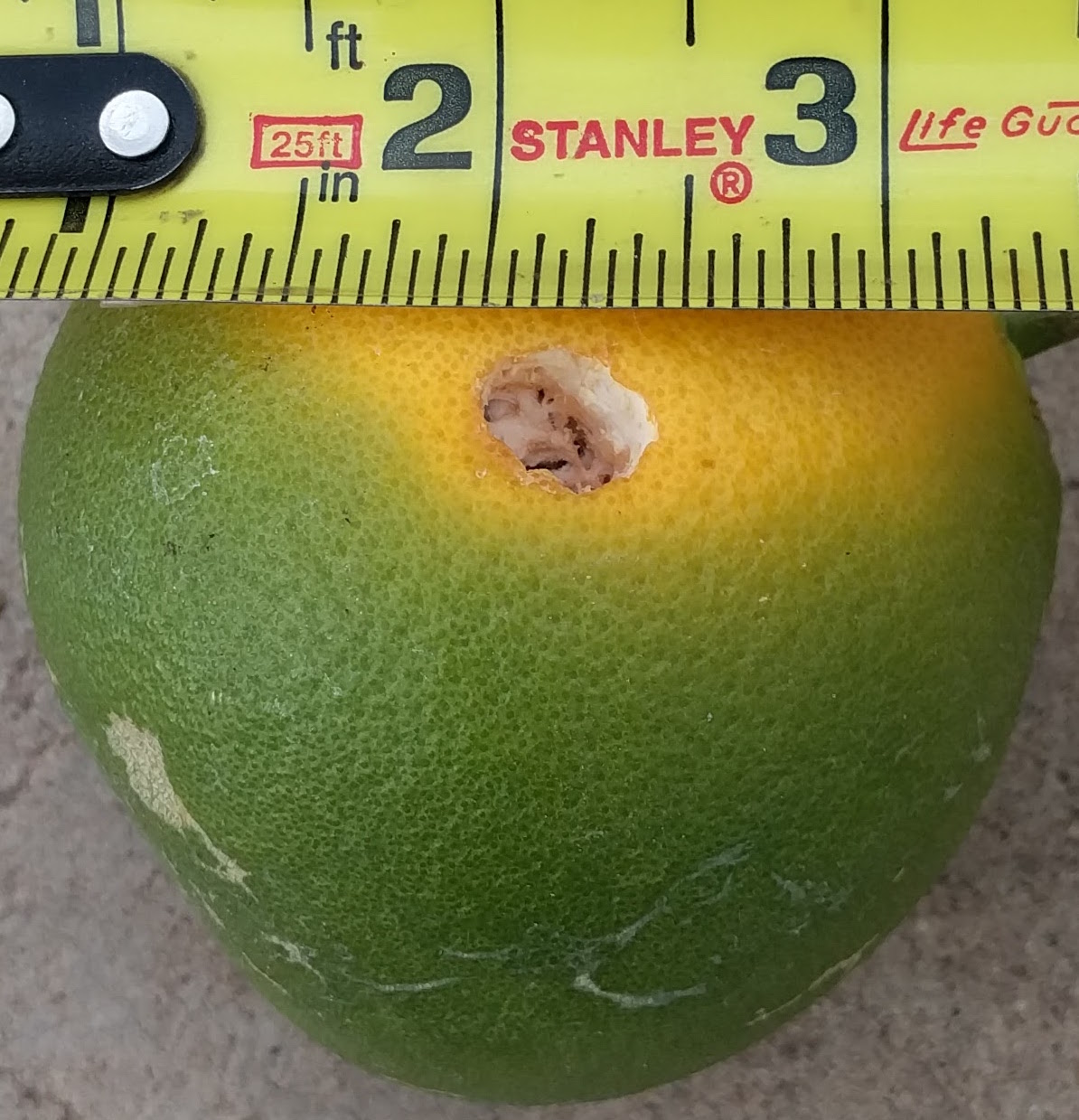 To test the theory of whether it is birds or something else I am leaving both pieces of fruit on the ground to see if they are attacked further. Hopefully this will attract whatever it is so it will leave the tree alone.

Update: This weekend I found a large hole in my bird netting, and a ruined grapefruit on the ground outside the net. I came out later in the day and startled a roadrunner near the tree. Given its long beak, size, and tendency to walk along the ground I'm now thinking that it may be the culprit - although it seems strange that it would like grapefruit instead of lizards. I put up a temporary metal fence around the tree using rabbit wire, so we will see if that fixes the problem for good. However it would be nice to find a better solution, short of attracting coyotes which in turn would be trying to eat the kids. ;'-(

Leaving sacrificial fruit on the ground did nothing.

What solved the problem for me was buying some bird/rodent netting and covering the entire tree with it. I used some rocks at the bottom to hold the netting to the ground to not allow anything to go under the netting. As soon as the netting was up, no more holes appeared in the fruit!

I wonder if this is stink bug damage but they aren't supposed to attack grapefruit due to the thick rind. The insects are very large, and I note that you have seen some flying insects in the holes. The solution is to get the fruit off the tree before it all gets damaged.

These holes are caused by fruit flys. I have lost about 20 grapefruit from my tree. The female strikes the grapefruit and lays eggs in the skin. The larvae eat a hole in the fruit from the inside and grow into more flys. I made homemade fruit fly traps from jars, apple cider vinegar and wax paper with holes tied over the top. Put them at the base of the tree. In about 15 minuites, I had thousands of flys in the jars. I have ordered yellow sticky traps to hang in the tree. Also clean up any fruit with holes, seal in a plastic bag, leave in the sun and dispose in the trash. Don't leave fruit with holes laying around. Just breeds more flys.

Not the answer you're looking for? Browse other questions tagged pest-control grapefruit or ask your own question.

20
How to get rid of insects on basil while leaving the leaves safe to eat?
9
How can I get rid of a large hornet nest in my hollow tree?
10
What are these white bugs that leave white stains on my cars and driveway?
10
What is this bluish-grey bug on my lettuce, and how do I treat it?
8
How can I deal with the beetles eating my grapevine?
11
How to protect strawberries from “predators”
7
How do I treat and care for trees infested with borers?
4
Indoor pesticide for edible plants
3
Will my grapefruit tree ever produce fruit after a freeze?
4
Identify these little bugs on my cherry tree (and others)