What are some low maintenance evergreens for an east facing partly-shaded bed?

I've just had a bunch of shrubs taken out from an east-facing partly-shaded bed against a house wall -- Viburnum Tinus and Aucuba Japonica. The situation suited them perfectly, to the extent that they were difficult to manage as they grew like topsy and needed cutting 2 or 3 times a year to control the height; also the viburnum tinus and the bed underneath was infested with viburnum beetle that we'd tried for 10 years to control without success.

I'm looking for a low maintenance evergreen (or near evergreen) option to replant that bed (we're working our way around the garden to reduce the workload as neither of us are getting any younger or healthier.) Ideally, it would have some fragrance as the bed borders the path to the front door. We want to plant through weed membrane and pebbles to minimise the weeding needed (and not have to deal with leaf drop on the pebbles which always discolours them). I want low/medium height stuff to make the garden look more open than it did with the oversize shrubs). I'm not bothered about flowers, certainly don't want to dead-head regularly.

Current thoughts are a mixture of English lavender, prostrate rosemary and euonymus, but it seems uninspiring.

What options should I be considering in the mix?

I just want to pick up a couple of points you mention, the first regarding your intention to use membrane and pebbles; you appear to be saying you want evergreen shrubs to avoid the need to pick up dead leaves from the pebbles, but I'm sorry to say that's not what's going to happen. Evergreen shrubs do not keep the same leaves all their lives, they lose leaves too, the difference is, they lose them year round in small amounts and replace them immediately, whereas deciduous plants drop the lot at once in autumn. A quick glance under any holly tree growing in the wild (or possibly in someone's garden) reveals the truth, because there's always a carpet of leaves beneath, so you may want to reconsider using pebbles.

Second, you've mentioned lavender and rosemary - both these are mediterranean type plants and prefer that type of climate, so that means full sun and relatively dry soil conditions, neither of which will be provided by this planting area. I should also point out (it might make you feel better!) that neither of these plants is fragrant UNLESS you bruise them in some way, so you won't be smelling lavender as you walk up your path unless you brush against it. If the front of the bed along the path is in a lot of sun, then you can certainly try lavender, but their useful life span is really only 5 years before they become woody and gawky looking.

If its east facing, it only receives sun up to lunchtime most of the year; if part of it is further shaded by a solid obstacle like your hedge, then basically you're looking at shade planting. Shrubs to consider are Skimmia varieties, Sarcococca varieties (fragrant flowers in winter), Prunus 'Otto Luyken', Euonymus fortunei varieties, Buxus and Mahonia aquifolium, which slowly reaches about 7 feet with a spread of about 5 feet over time. With the Buxus (Box) you'd need to keep it trimmed back to prevent it getting as large as it wants. All the other plants mentioned don't get higher than 3-5 feet.

Given the problem with dirty pebbles, it's probably better to forget the membrane and stones and plant low growing ground cover as well as the shrubs; over time, they will spread and prevent weed growth. Candidates for ground cover include Lamium varieties ('White Nancy'; 'Beacon Silver' for instance, there are yellow leaved varieties too), Ajuga reptans, Pachysandra terminalis, Campanula muralis (now called C.portenschlagiana, don't buy C. carpatica instead, its a messy grower) and a low growing Euonymus called E. fortunei 'Harlequin', which doesn't get higher than about 4 to 6 inches. For sunnier areas, Arabis procurrens variegata, Iberis sempervirens, possibly Helianthemums, though they really prefer as much sun as possible.

All plants mentioned are evergreen, including the ground covers. One other plant that flowers well in shade and which might therefore be useful is Liriope 'Munro White'. If you aren't going to have pebbles,and some of the bed gets half a day's sun, then Berberis atropurpureum 'nana', with reddish purple leaves and/or Berberis 'Golden Nugget' with bright yellow leaves will liven it up a bit, but they do need half a day's sun or they'll just be green; they are deciduous and neither gets taller than around 18 inches.

I believe a very close match to your idea is Abelia x grandiflora.

(I have no idea why the name is "grandiflora" - the flowers are tiny; but don't let this deceive you, their fragrance is powerful, abelia is a magnet for bees and butteflies) 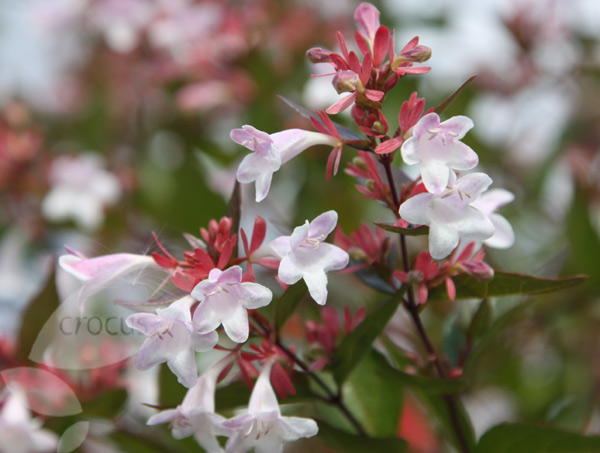 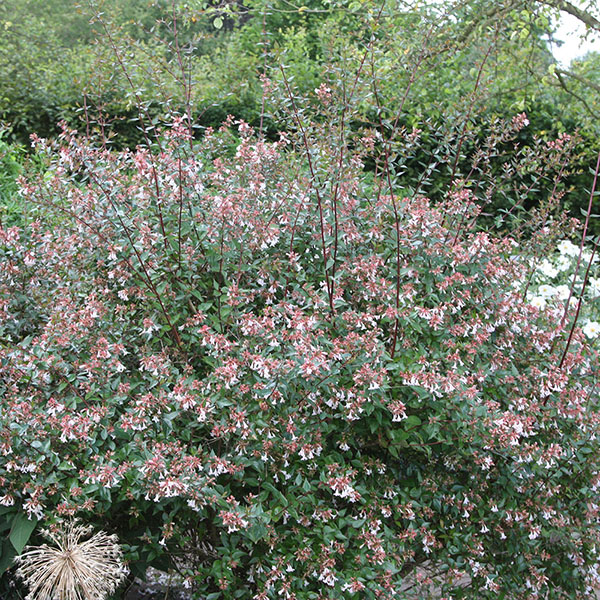 Bamboo's suggestions are great. I've got one more I would like to add. This is a conifer. The only evergreen I will plant in partial or full shade. Yew. Taxus baccata repandens, which has a vase form and stays below 3 or 4 feet and needs no pruning. Dark green long lived but just make sure your kids don't eat the berries. Yew repandens Really not a problem for kids if trained, nor animals..who don't need training.

Get rid of the membrane. Pebbles are fine but the do provide great living facilities for bugs and slugs.