I have a potted Tulsi plant got from a nursery a month back. The leaves were green then. After a pruning, the new leaves started getting yellow. There are two plants and both of them have the same problem.

Any idea what is happening? 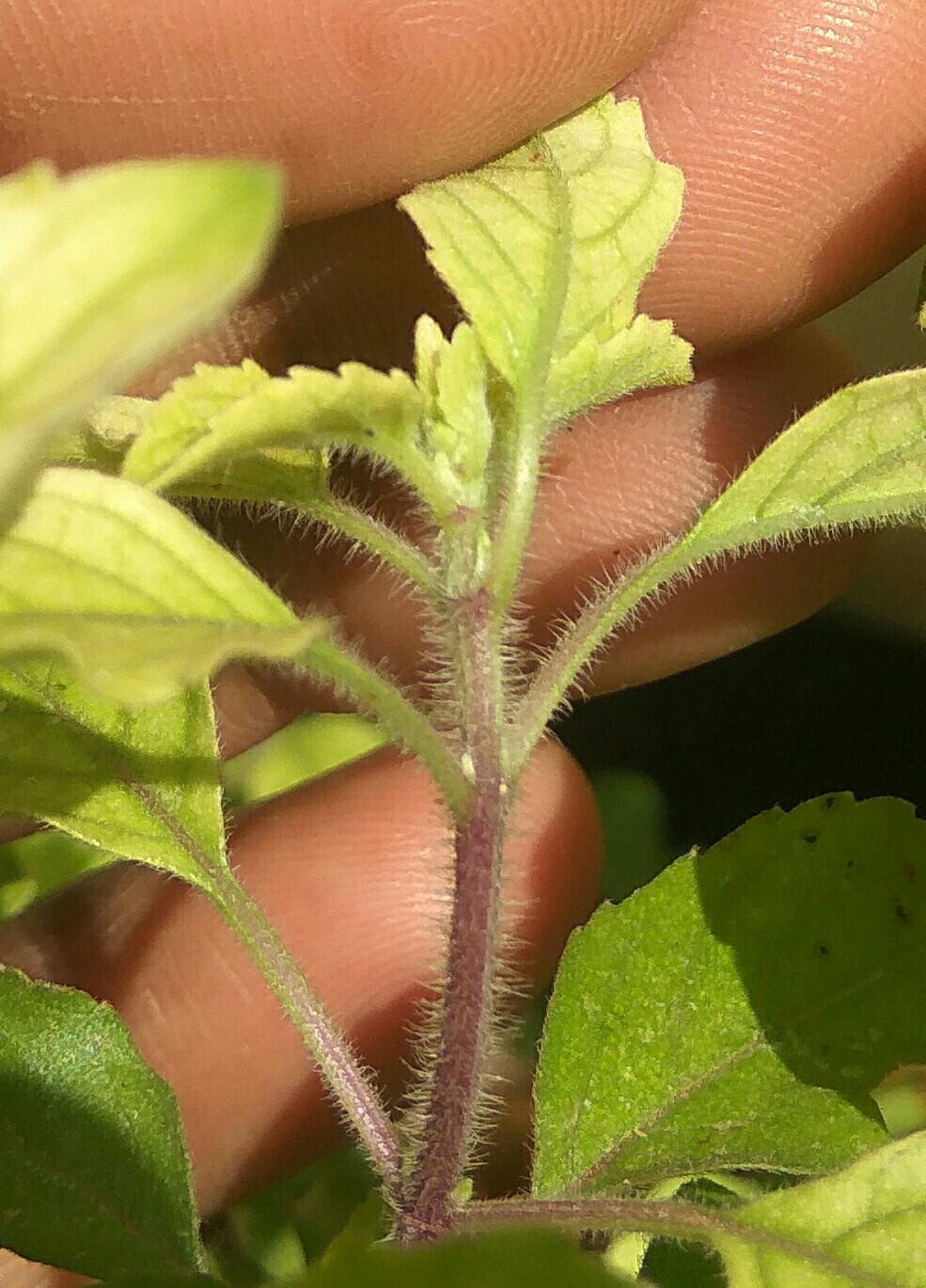 Location is south India with lots of sunshine and outdoor environment.. 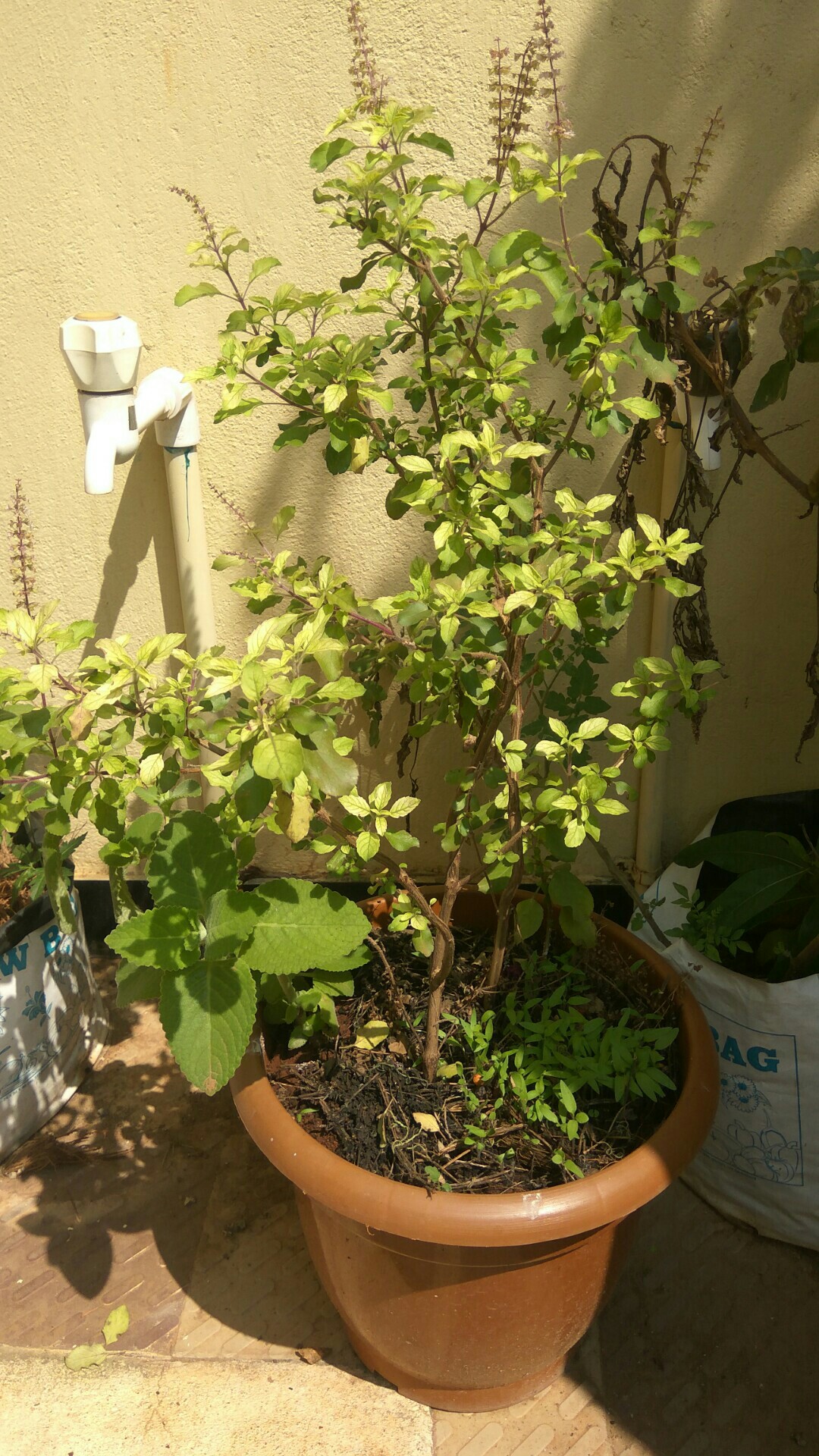 I'm pretty sure your plant is Ocimum tenuiflorum, commonly known by many names,but usually Holy Basil; Tulsi is also one of its common names.

I rather wonder if its potbound - turn it out of its pot to check and when you do that, remove the Plectranthus and pot it up separately. You may want to extract some of the seedlngs and pot those up, or just remove them if the rootball is solid. If it is potbound, that would explain the yellowing colour of the leaves, and a larger pot is called for, obviously. I don't know what the temperatures are like during winter where you are, but this plant is a woody perennial only in tropical regions, so the south east asian tropics are where it would be perennial - but if your temperatures cool down, then growth might slow down and the leaf colour be less vibrant. The other reason for less than optimum leaf colour is the fact its flowered recently; many plants look somewhat 'tired' after flowering, especially in pots and if they're putting energy into making seed because the spent flowerheads are still present.

If its not potbound, then cut back the flowered stems and give it some balanced fertilizer, something with an NPK of 7-7-7 if possible, if you can get anything like that where you are. It's still a good idea to remove the other growth in the pot, to allow the Tulsi its own root space; the Plectranthus will also need root room of its own in a separate pot anyway. Cut back the flowered stems even if it does need a new pot, unless you want to save any seed.

If I came upon this plant I'd ask the owner, my client, when they last fertilized with balanced fertilizer? I explain to them what balanced fertilizer was and then ask their permission to fertilize this plant with basic, good old Osmocote extended release 14-14-14 fertilizer. I would make myself read the directions again for the millionth time. I would first check to see if the soil in this pot was garden soil or potting soil from a bag and if potting soil I'd check to see if any fertilizer was already added to the soil. If the former I would explain why no potted plants should have garden soil for soil. I would get permission to get the soil (cheapest) and transplant this plant. If there was fertilizer in the potting soil I would take that into account. This plant looks like it needs Nitrogen but there are a few other deficiencies maybe even genetics that would cause this color.

If there were rock or gravel at the bottom of the soil above the drain hole I would have another talk with this client about 'perched water tables' and drainage. I'd then clean the pot with bleach, fill 1/3 full of fresh potting soil, transplant this plant, gently press the soil all around the roots, lift the bottom of the pot off the surface of the patio or the saucer to enhance drainage, explain how to water this plant by allowing the soil to dry out a bit before watering again, I'd check what water the client had access to and if it was municipal water I'd suggest getting a bottle full of water from a friend's well to water the plant, my doggies, kitties and myself! Fluoride is fantastically poisonous. Does nothing for teeth. Don't fertilize for another 4 to 6 months which means you might be planting different plants by then. Almost looks like Catnip...your second plant.

My holy basil - Tulsi plant was doing great with spring water! I started using tap water and the leaves are turning yellow and falling off. I don't drink tap water or even give it to my cat, I will be returning to the spring water because tap kills living things! 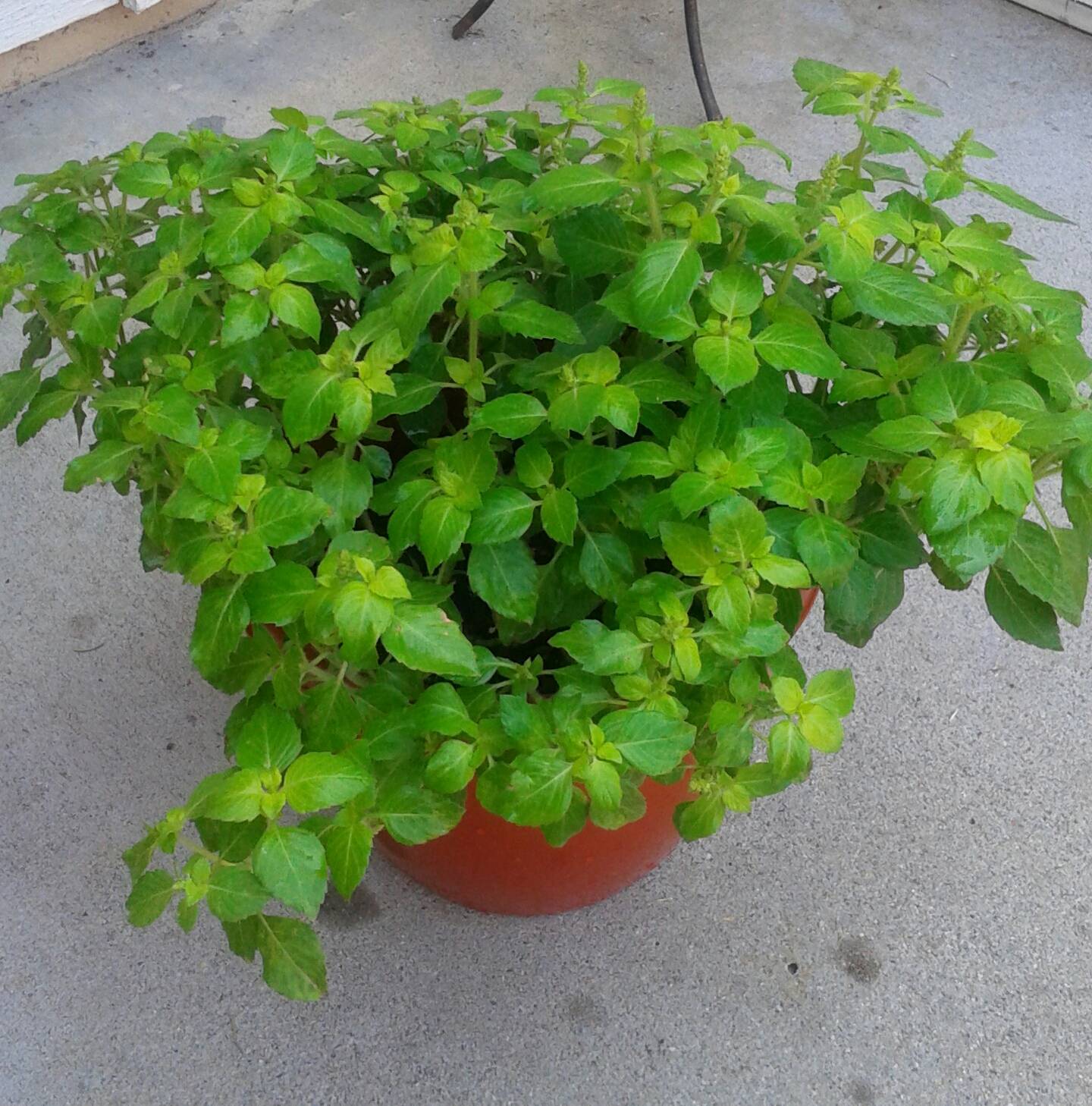 Not the answer you're looking for? Browse other questions tagged plant-health plant-care container-gardening basil or ask your own question.