What is this ornamental conifer and is it dying?

This ornamental conifer, which looks like some sort of blue spruce, has lived in this spot since at least spring of 2014, when it looked like this: 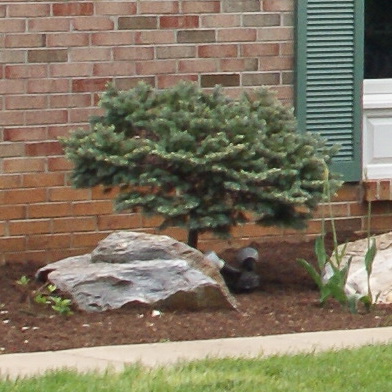 I live in SE Pennsylvania, and it has appeared healthy until a few weeks ago, when I noticed a majority of its needles had died. We haven't had extraordinary weather recently. Is the plant itself dying? Is any care indicated? 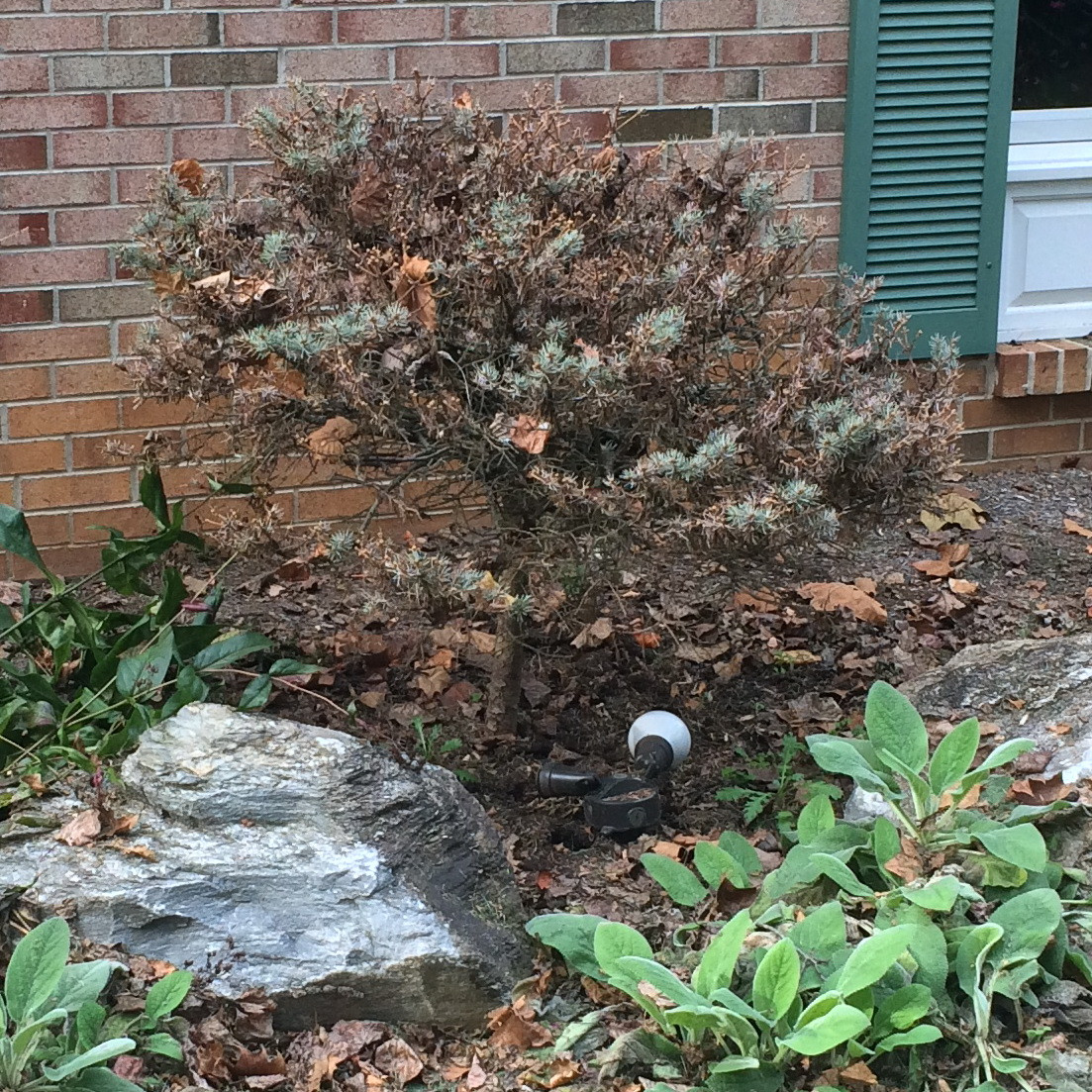 (The only thing that has changed in its environment since it was originally planted is the addition of lamb's ear to the bed last year, which the picture shows is growing a few feet away.)

Per @stormy's request: There has been no fertilization since a dusting of Preen in the Spring. I pulled soil back from the trunk until I was scraping dense clay and took these two photos: 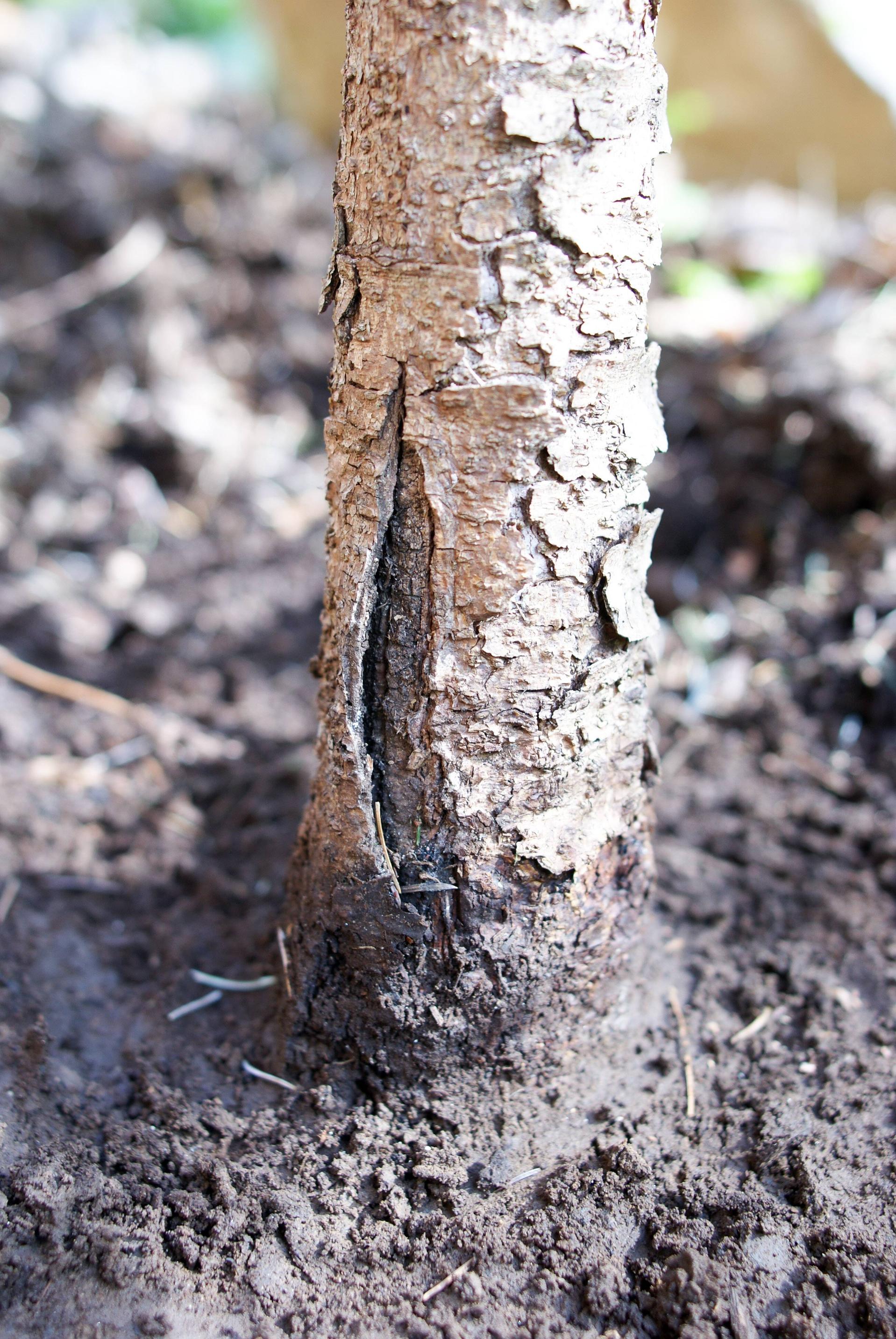 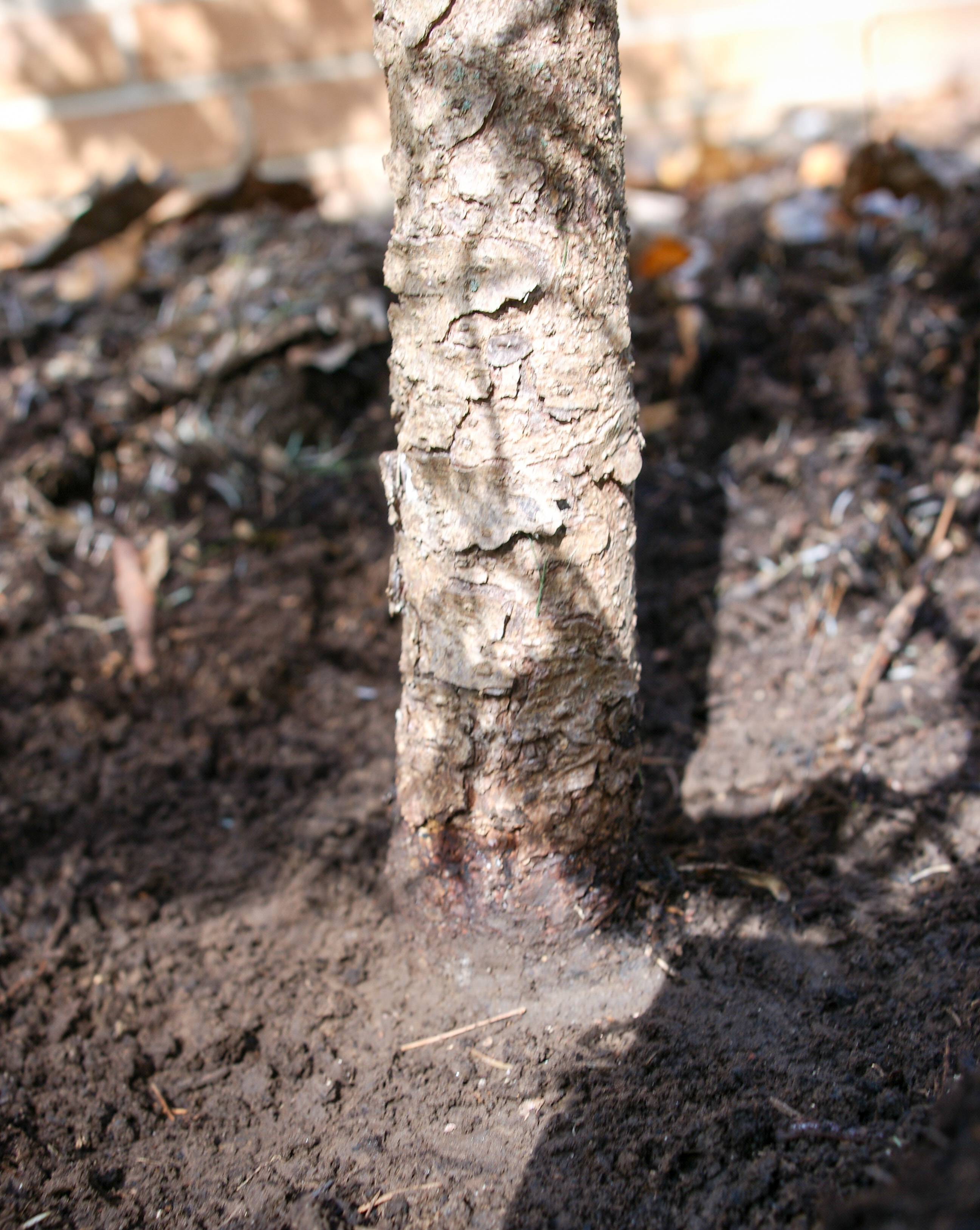 Here is a macro photo of a cut stem and dead needles: 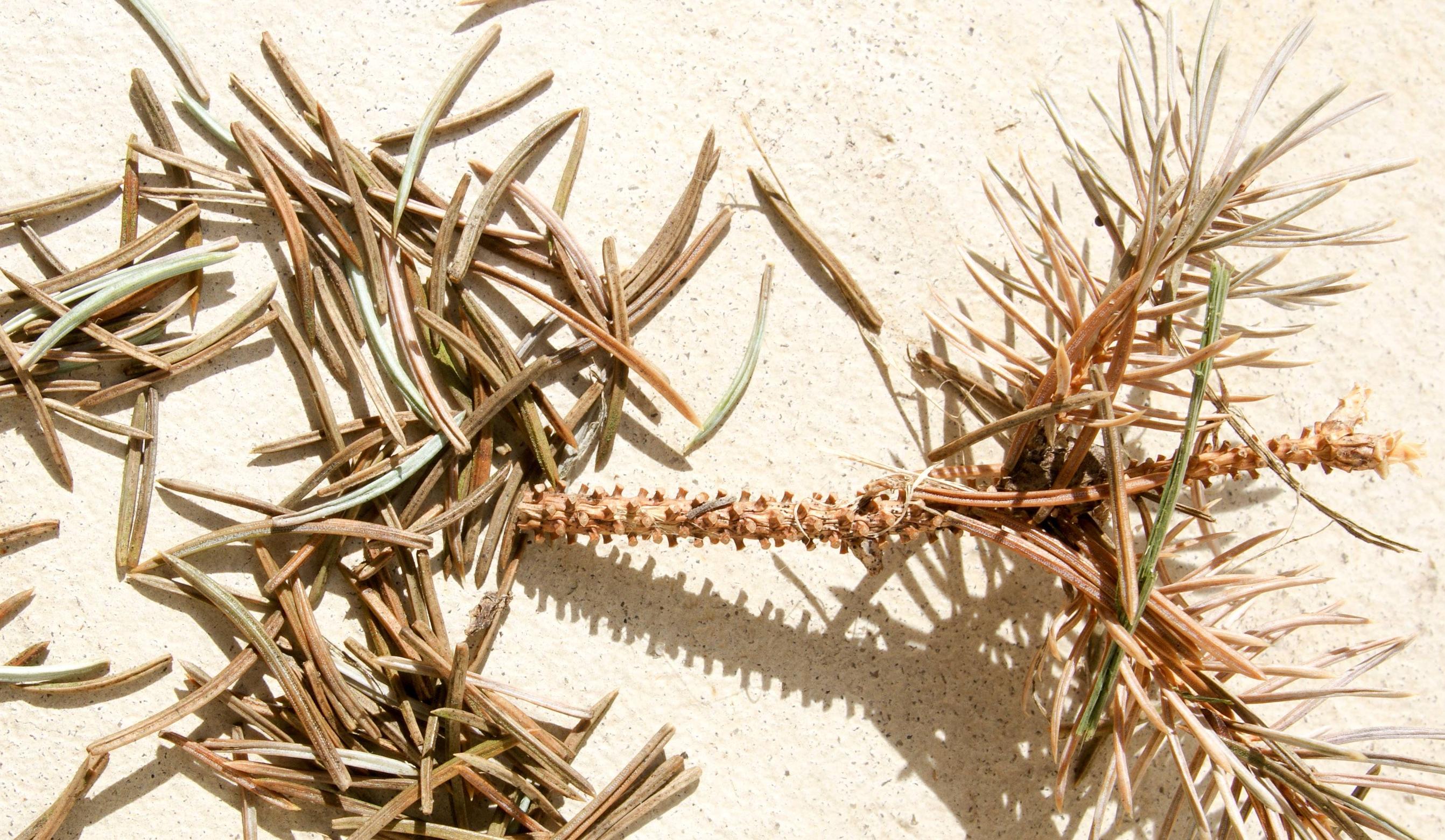 Here is a close-up of heavy lichen coverage on the branches, although I think that had developed that while the tree was still healthy: 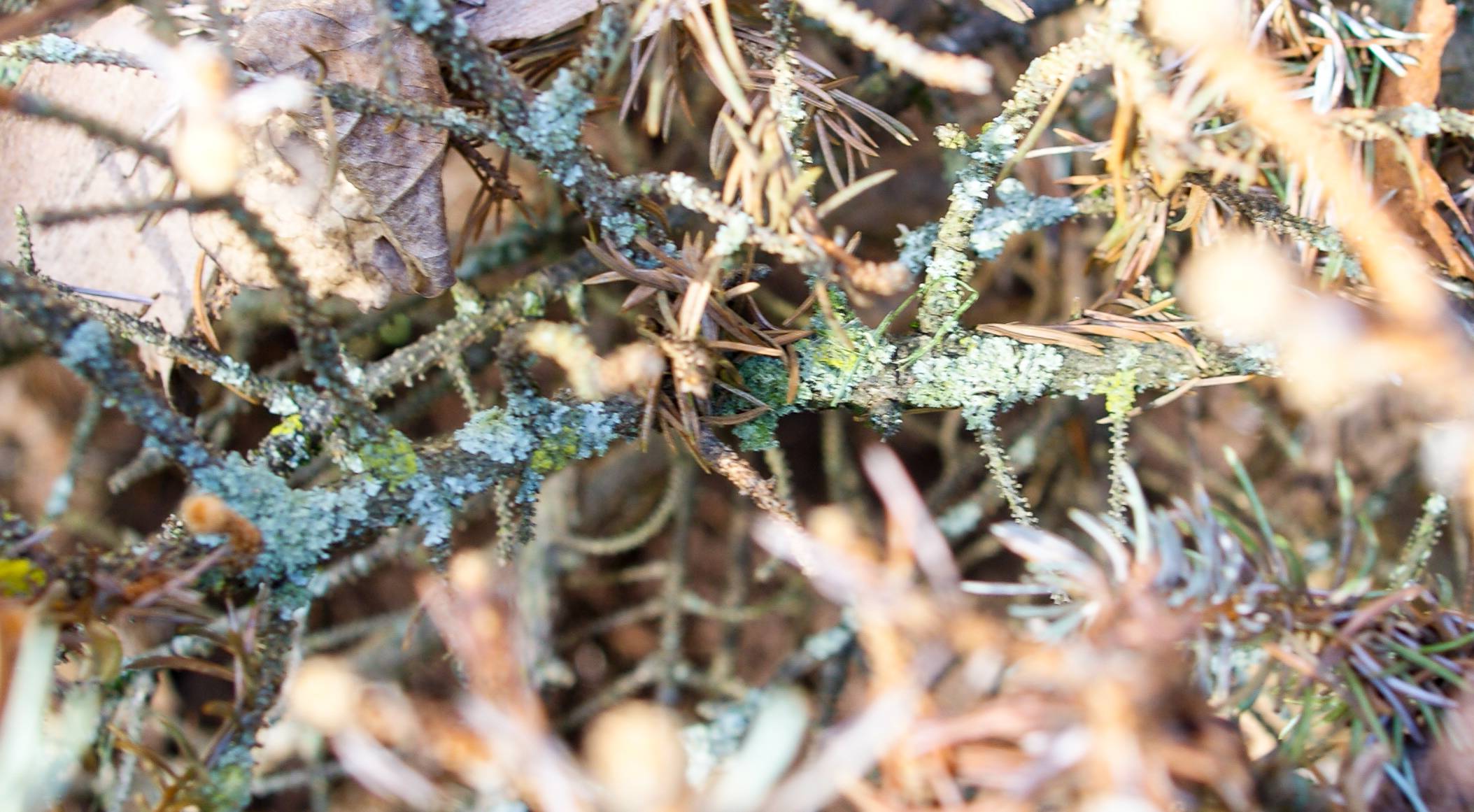 This is the Bird's Nest Blue Spruce. I think. Picea abies 'nidiformus'...grins...If this went down that quickly, I'd look at the last fertilization (do you have an outside maintenance company), Blue Spruce Aphid or adelgid and I would also look at the base of the trunk where it goes into the soil. If there is any trunk at all under the soil and mulch we need to see how far the damage of constant moisture has gone.

Please look at that trunk. Pull the soil and debris away from the base until you are able to see the top of the root ball. Leave it that way. Take a picture of the bottom of the trunk. Are you able to get a magnifying glass to look closely at the blackened stems and leaves (indicative of insect 'honey dew'). If you could take a picture that would be fantastic.

Added notes: The cambium is the LIVE part of the trunk. It contains the plumbing for the entire plant within an 1/8 inch or less beneath the bark. The rest is not alive nor in use. Lots of plants have hollow centers because of this. If you scrape the bark using your finger nail of any plant you will see a bright green. That is the vascular system of the plant. There is Phloem and Xylem...one is for uptake of water and chemistry to the leaves for photosynthesis and the other is to take carbohydrates/food the plant MAKES via photosynthesis down to the roots for use and then storage.

I'll try to find a picture or a way to illustrate how to slice and dice. I do not see sign of insect damage (blackened honeydew). I am dying to draw this for you...your plant is dead. Just have to say. But to know why is critical so this doesn't happen again. I think it has everything to do with the vascular system at this point.

Check your foundation however. Get the soil off of the brick and down by 4". Check for an asphalt emulsion coating on your foundation. Find a way to know if you've got a foundation drainage system. When was this work accomplished? Hiring a private building inspector before you purchase is best but this plant is worth its weight in gold if it has helped you to investigate your home's foundation. You have rights and a large window right now. Hope your foundation is sound. Soil on your brick is not sound...

A big mistake many people make when planting trees and shrubs is to either plant them too deeply or mulch them too incorrectly. The fact that you had to scrape soil away from the trunk to get a photo of the trunk trying to put out roots indicates that the plant was planted too deep or mulched wrong; my guess is that it was planted too low or sank after planting because the hole was too deep (the loose soil at the bottom of a deep hole will compact, and a tree or shrub will then settle, resulting in a buried trunk). It can take 3-5 years for a woody plant to die because of depth issues.

To prevent this from happening again:

For reference, I have a horticulture degree and spent seven years in the trade. You could also read anything by Michael Dirr. He's quite technical but has a very engaging and readable writing style.

Not the answer you're looking for? Browse other questions tagged identification plant-care conifers or ask your own question.

2
Is trimming up the branches of a conifer a bad idea?
1
What type of conifer is this?
2
Designing small conifer compositions
2
The bluest conifer of all time
3
What is this dense erect sculpture-like bluish conifer?
3
Growing Ipomea near mid-sized conifer?
2
Why are my corn plant's leaves turning yellow?
1
Small conifer in pot identification
3
What caused the crazing under the bark of this conifer?
5
What type of conifer is this and is it OK near a house?