What is the cause or cure to the branches curling on my tomato plants?

Aside from the curling they are growing, flowering and starting to fruit.

It is the beginning of our tomato season as it is spring here in Sydney, Australia.

I have 3 tomato plants which have been planted at the same time. Indeterminates called (1) Truss Plum, (2) Mini-Roma and (3) Tomato Trussty. They are about 1 meter - 1.2 meter in height in the photos. Their age is about 6 weeks

I do this as I do not have the room to perform rotate plantings. Hence the A-frame and using fresh potting mix everytime.

Herbicides have not been used in the area.

The irrigation as shown is on the lowest dripping setting and in my opinion adequate watering.

The 3rd plant Trussty shows the most branch curl. There is also some leaf curl in a couple of photos. 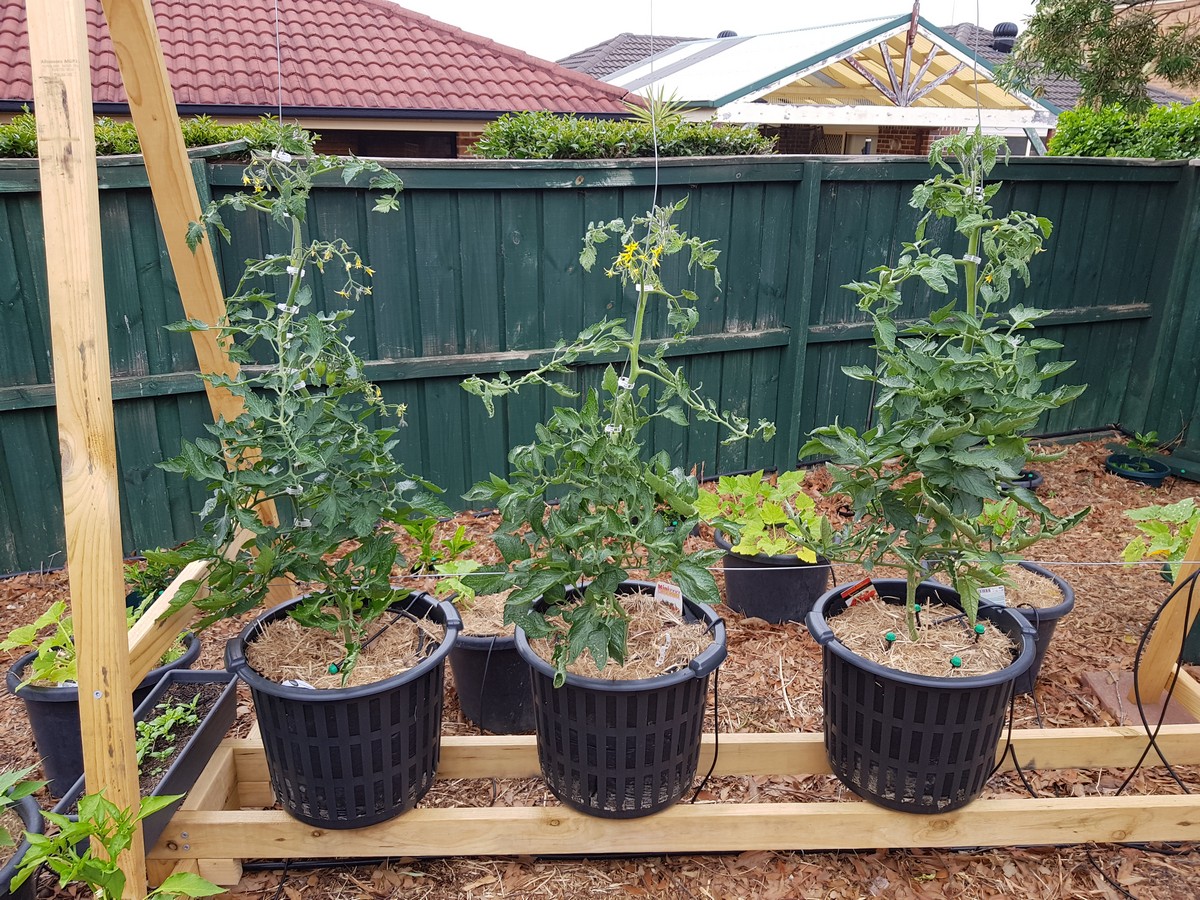 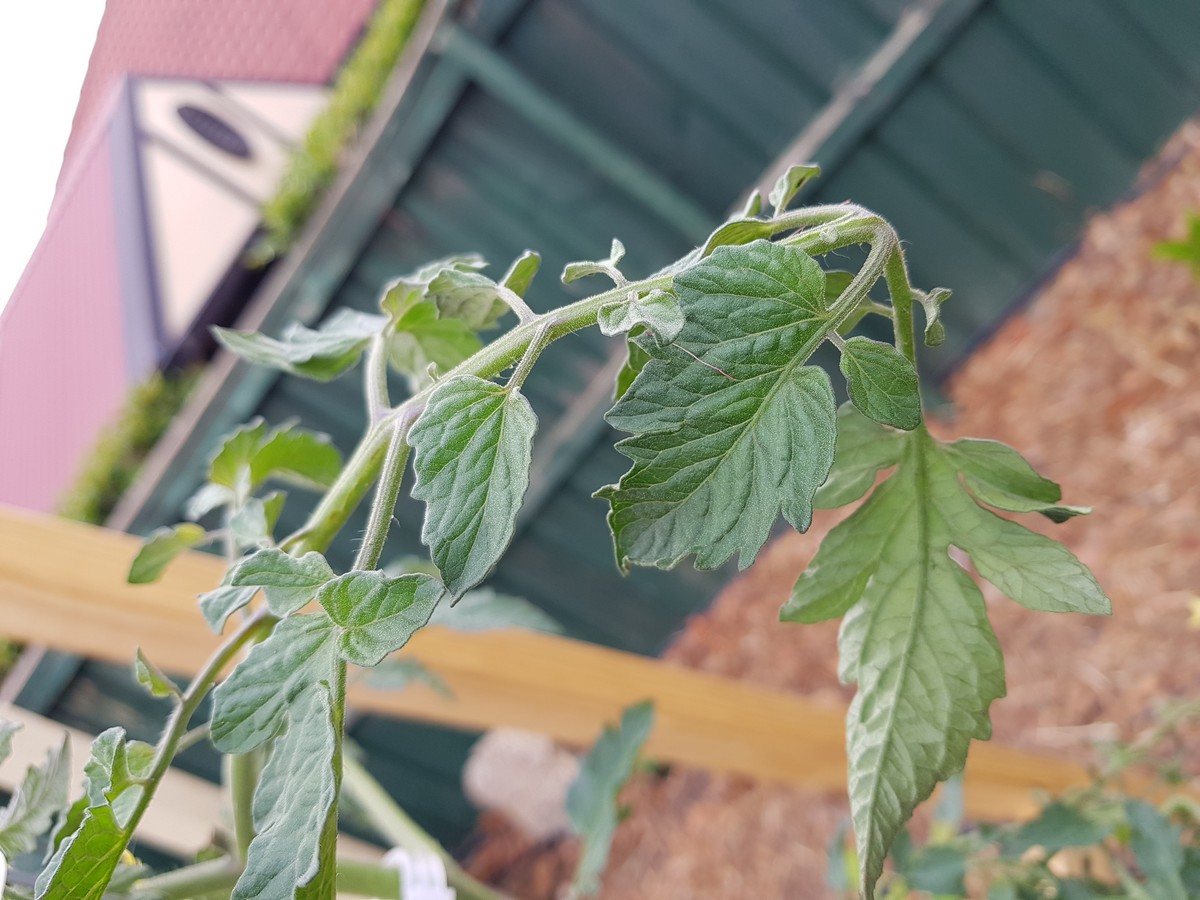 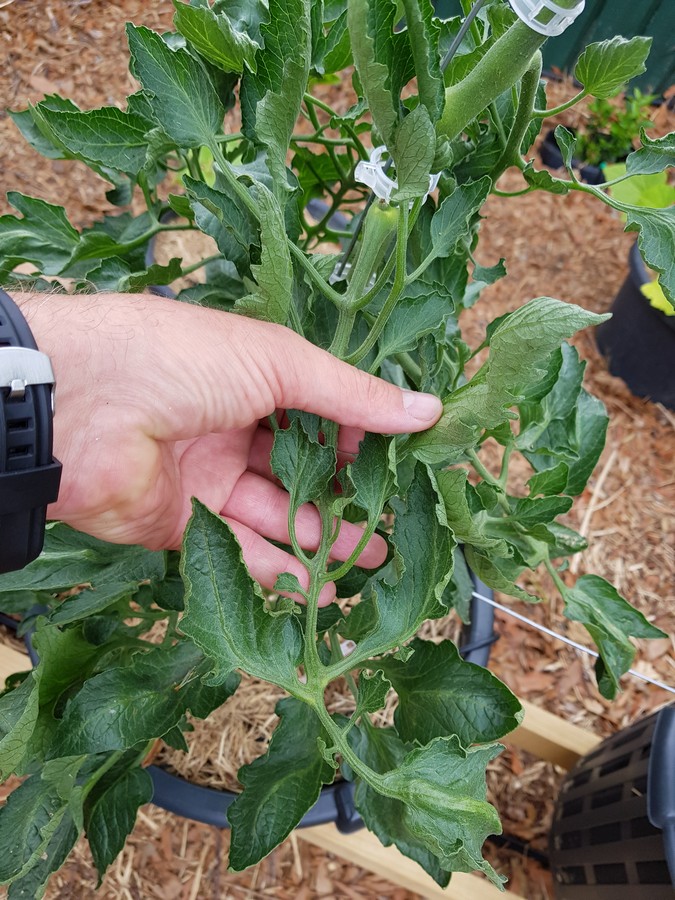 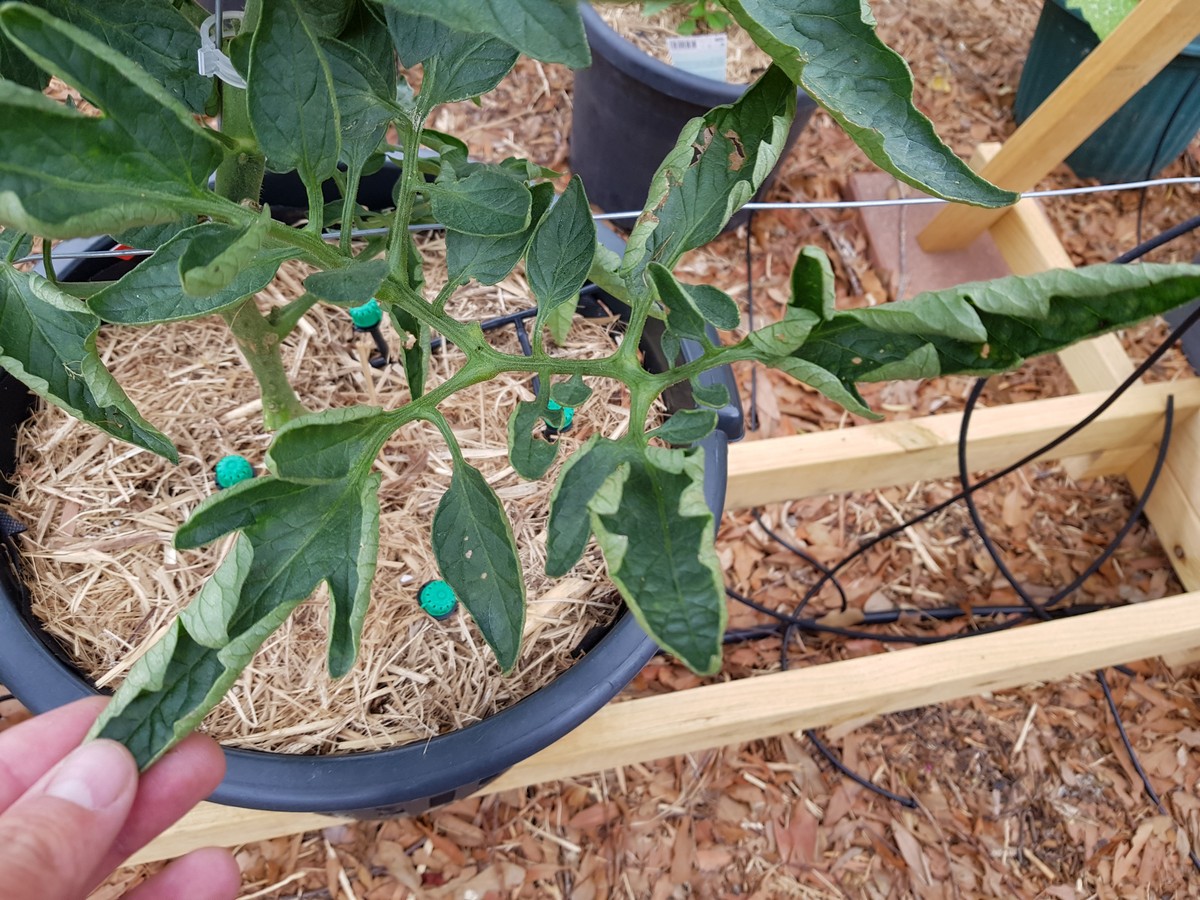 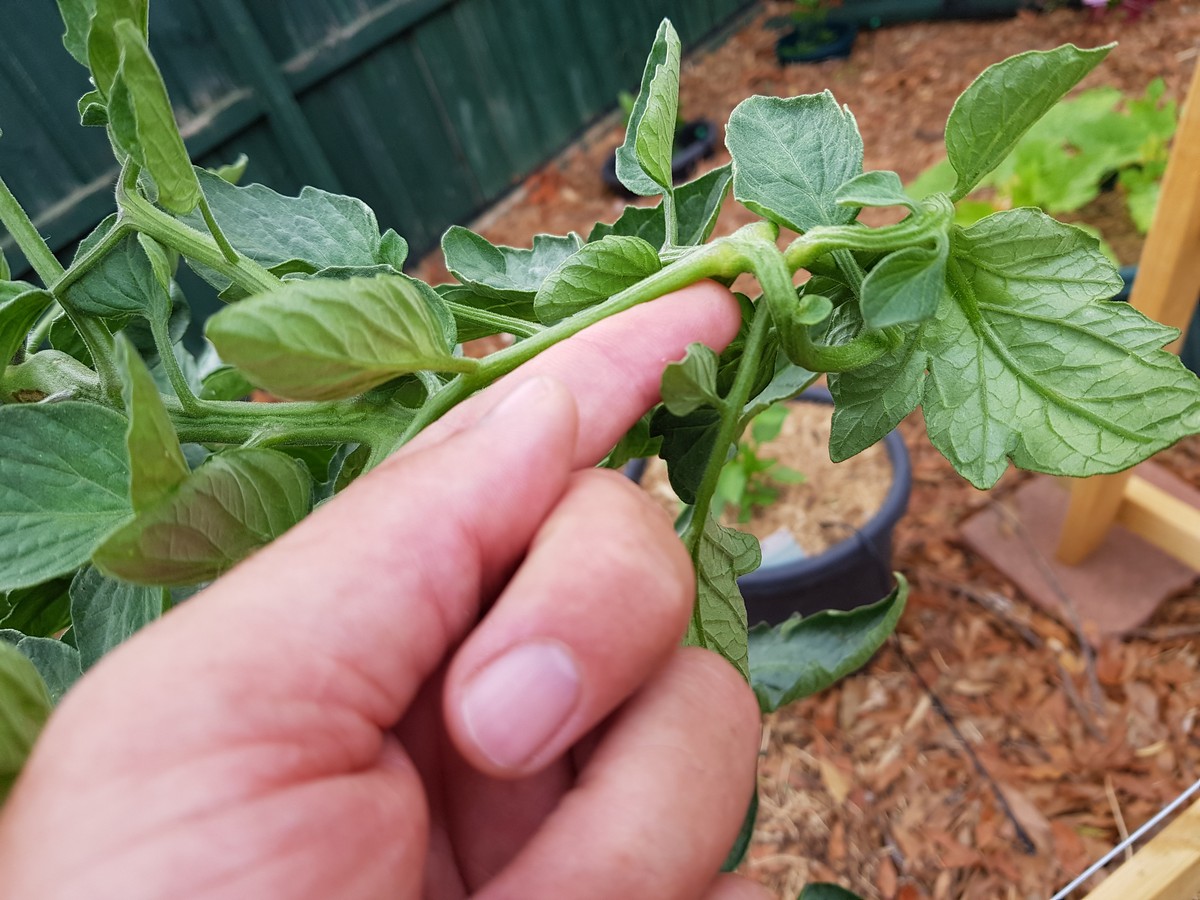 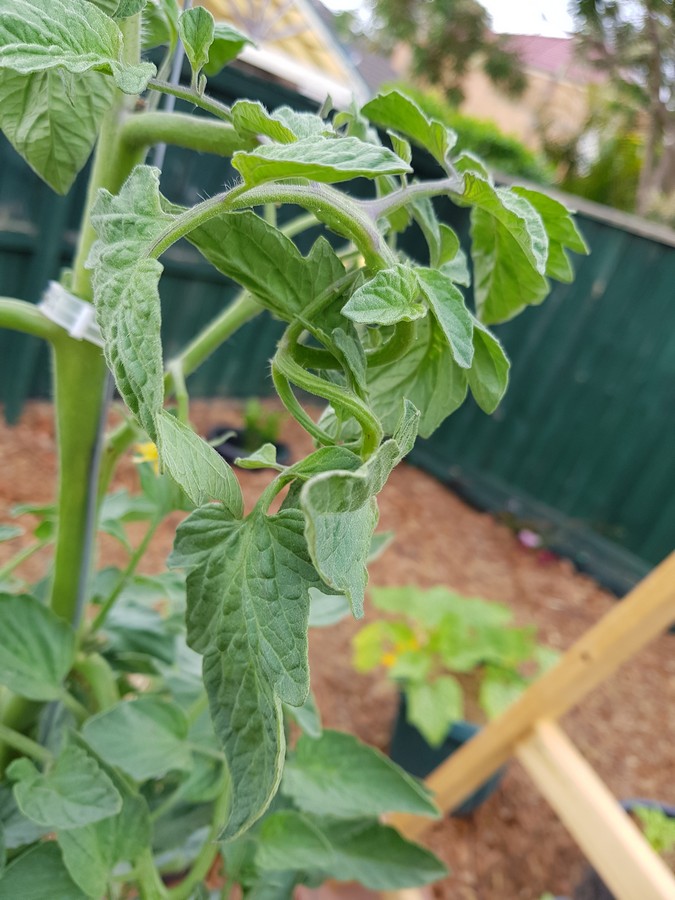 The weather in Sydney has been unseasonably hot and dry, no rain for 2-3 months. Unusual for spring but not a condition I would think would be anything but great for tomatoes since I keep the moisture up. Not humid and not frosty coming out of winter. The irrigation system is turned on manually by myself and the tap timer turns off after 10 minutes. I water every 2- 3 days depending on how hot it has been.

The landscape fabric the pots are "dressed" in is not weed mat. It is not a plastic. Pillar Products 0.915 x 10m WaterLOCK Premium Mulch Mat.

With air pruning pots you need a lot more water. I'd put a moisture meter into the pots to see if you're watering them adequately. Or stick your finger deep into the pots. You might be better off continuously drip irrigating them.

I did try air pots with a tomato plant last year in Wellington, and once a day watering wasn't enough. And your climate is much hotter so it will be worse.

I strongly suspect a major part of the problem is the pot and fabric method you've used for potting up. I note you have used straw or something on the tops of the pots for insulation/water retention purposes, but with the potting up method you've used, the rest of the roots are not insulated at all. If the weather is hot and dry, and especially if its windy,the roots of the plants are much more exposed in the laundry baskets because they're open round the sides. Although the fabric you've used is thick and said to retain water, in and of itself, it does not retain water, it is still permeable to air and moisture. Its intended use is over soil, and in contact with the ground, usually with a mulch product on top; in those circumstances, it will retain moisture within the soil by reducing evaporation and, to some extent, insulating the ground from the heat.

However, in this situation, the fabric is, by and large, all that's between a relatively small amount of soil/root and air/heat. As the plants grow on, the root material increases, which means there's even less soil to root ratio, and ever more exposure to the elements of wind, heat and more light than roots would normally expect to see. Water will seep through the sides of the material as well as the bottom, so a lot of water is being lost via direct seeping once they're watered, and by evaporation when the direct water supply is off. And this water loss is occurring round the whole rootball, not just at the bottom, because of the slotted pots; there's nothing much to retain the water, but more importantly, to reduce root exposure to wind and heat.

If it's possible to transfer the fabric and rootballs into proper pots and reinstate your watering system, I recommend you do so; alternatively, but somewhat less effective, wrap the pots in something round the outside to help insulate them, and increase your watering a little, perhaps by making it more frequent, in an attempt to keep the roots cooler.

Curling of leaves and stems isn't unusual in extreme conditions (heat particularly), and there may still be some curling going on if the heat continues, even if you move the plants to proper pots, but over exposure of the roots in the current manner won't be helping at all. The other possibility is early viral infection, but with that, I'd expect to see yellow mosaicing, streaking or patches on the leaves.

I would say one of your neighbors put weed killer on his lawn. Tomatoes and grapes are hypersensitive to it. Minor damage like that can be the result of herbicide applied over 100 ft away.