How common are double dicotyledons?

I'm growing some tomatoes from seed, and one of them has two pairs of cotyledons. The stem splits just before the leaves start with a pair of cotyledons on each side. The leaves are smaller than its siblings'.

What causes this and how common is it? 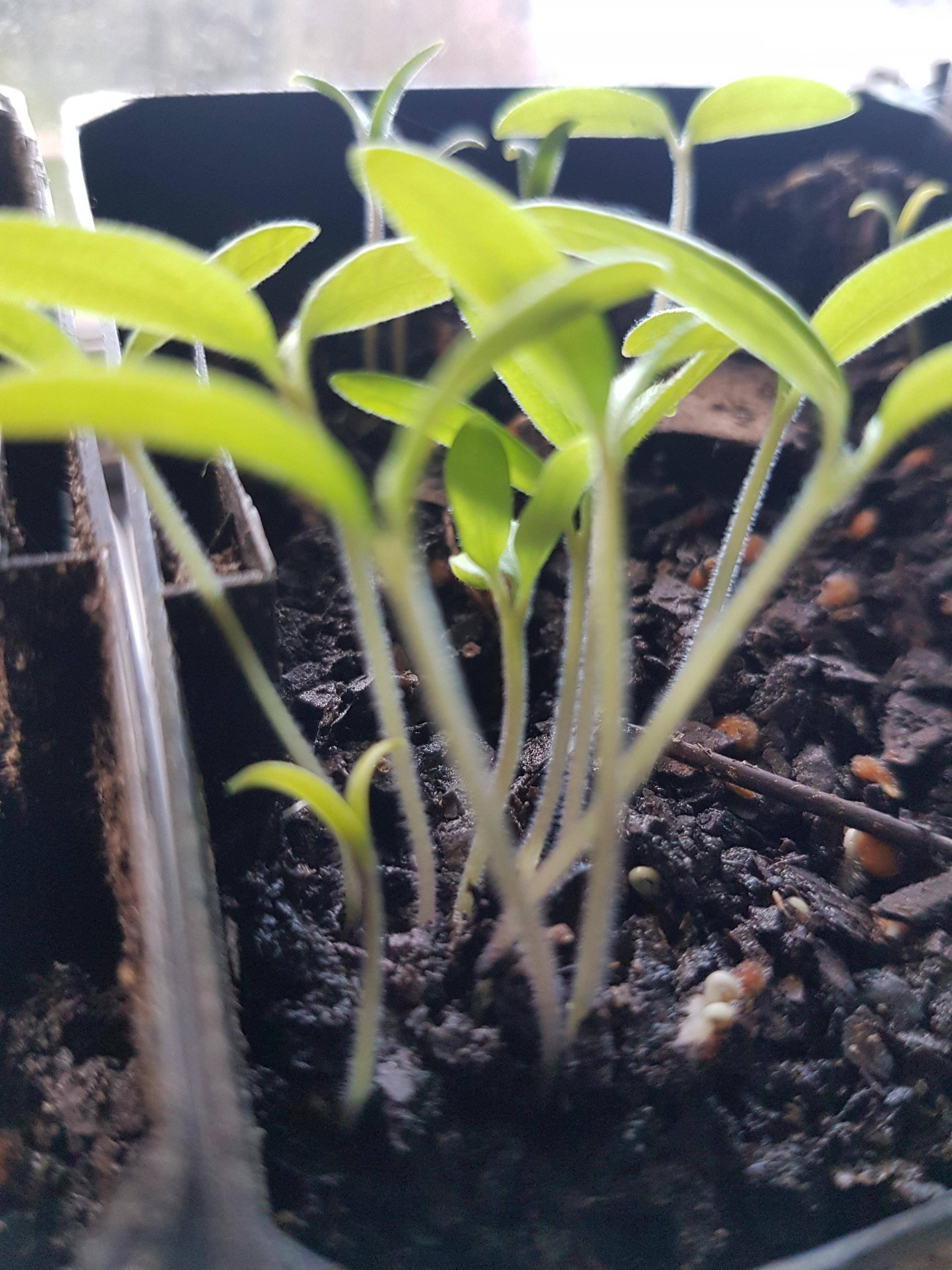 The seedling with the double dicotyledons is the small one directly in the centre of the photo.

There are few reports on various forums about tomato plants having three or four cotyledons, but you can't make a conclusion out of sporadic reports. It would be more desirable if we could find scholarly articles on this topic. However, what I found was related to the number of cotyledons of other dicots. In the article 'Cotyledon organogenesis' by John W. Chandler, the author states that auxine hormone plays a major role on the regulation of genes that influence the cotyledon number.

In Table 1 'Loci, mutations and redundant gene families affecting cotyledon organogenesis or pleiocotyly in various species' there are a few links to studies made on tomato plants. Unfortunately I didn't find a free copy of them.

The plant Arabidopsis thaliana in the above mentioned article is used as a model for other dicot plants because of its small number of chromosomes and because its genome has already been mapped (just like lab mice are used for preliminary testing instead of testing directly on humans).

On the article 'Variable cotyledon numbers in Mammillaria beneckei' (download link) by Stan Oome, the author discusses the increased number of cotyledons not just in cacti, but also in other species, like wild radishes and mentions another study where 5% of radish seedling had an abnormal number of cotyledons. The author suggests that dicot plants supress the genes that lead to more than two cotyledons because it is an evolutionary trait related to germination underground that helps them to protect the meristem when emerging from the soil they germinated in.

Because plants showing pleiocotyly have a different leaf arrangement instead of the species' characteristic, their ulterior growth is different in some aspects. This is why commercial seeds are tested before they go on the market and unusual/deviant seedlings are eliminated. The result is more uniformity within a batch and within a cultivar, so your four-cotyledon tomato seedling comes from a combination that managed to escape the human quest for uniformity in growth and harvest quantity.

If I were you, I'd keep it and monitor it because valuable information can be discovered about the leaf arrangement and about the ability to bloom and set fruit. If you don't want your other tomato plants to cross-pollinate with the four-cotyledon one, cover the latter's flowers with paper bags and remove the paper bags after the flowers wilt, when the fruits will already be formed.

Update after OP mentioned the seeds are collected from previous crops (seed saving):

FAO recommends that genebank collections should come from at least 30 different plants per species/ or landrace/ or cultivar to ensure genetic diversity. The lesser number of plants you collect seeds from because you want to avoid having unused seeds, the lesser genetic diversity in your collection and the greater the chance to have plants that express unusual characteristics. As Giacomo says, environment also plays a role in gene expression, so it's hard to predict what traits will show without watching them grow.

Mutants are normal within all life forms. How DNA is tried and tested. Think about the 4 leaf clover, normally trifoliate. Happens a lot. We most certainly are able if we haven't already done so, to make 4 leaf clover a new variety, via genetic engineering. The ability to take up more light per leaf with 4 that don't over lap than 3 that only over lap and shade the leaves below. Needs to be tested for the positives versus the negatives. Better one leaf makes food for the plant or perhaps a few layers down with less per leaf. We humans can play with this stuff but we shouldn't be thinking we know more than nature who has billions of years of practice. Just sayin'!!

Your tomato sounds pretty similar. Fascinating to experiment. I wouldn't be too quick to determine that that tomato was better. I'd make sure I didn't collect seed.

Looking forward to your picture and your techniques to grow your tomato starts. Where do you live? The fact you can even spell cotyledon tells me you have some education about the plant world. Anything you feel you can explain concerning your thought process and plant experience would help a more personalized 'reading'...ha ha ha.

Not the answer you're looking for? Browse other questions tagged tomatoes seedlings or ask your own question.

17
Are these tiny tomato seedlings going to be too crowded?
4
Should I remove tomato “side shoots” growing from cotyledons?
2
Why do tomato plants in stores still have healthy looking cotyledons?
3
What is this plant producing blacks seeds in a calyx like a Physalis but isn't one?
16
Do seeds from fresh tomatoes need to completely dry before they will sprout?
10
Why did my tomato seedlings stop growing after their first set of true leaves?
8
A seedling with three (instead of two) cotyledons