Glyphosate accident on lawn, how to repair?

I thought Glyphosate was safe on grass so sprayed it liberally on the weeds in the beds and clearly have splashed the grass. What are my options to repair? What do you recommend? Would I noticed the difference with grass from another supplier?

I live in London, UK. PS what you cant see is plastic edging (controversial I know!) which makes redrawing the edging difficult as the edging is 1 continuous piece. 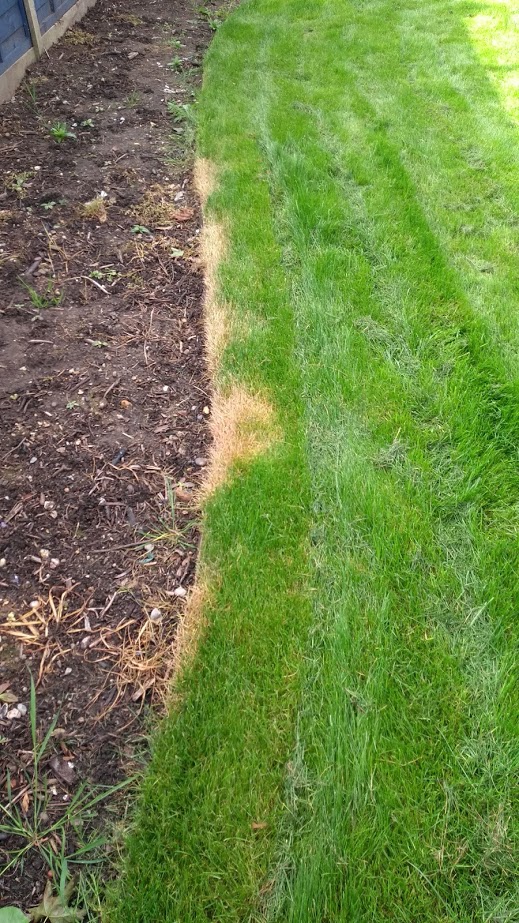 Over time, the grass will expand anyway, so if you are a bit less diligent in edging the lawn, you could even let the lawn expand to the original border line, if you prefer the narrower flower bed.

Well, firstly, next time you want to weed, do it the old fashioned way, with a garden fork or hoe, and second, it's best to read the instructions on the products you use. As for the grass, I'd do exactly as Stephie suggests, trim away the damaged edges by reshaping the lawn edge, but using a half moon edger. However, where the deeper damage is that goes further into the lawn (assuming you don't want to cut that much off the lawn) cut it in a square shape all round with the half moon edger, reverse and replace it, so that the damaged part is not at the edge. You do this because it's absolutely impossible to seed the edge of the lawn. Now, you've got a choice - before replacing that square of turf, you can break off the bit that's damaged and then reverse and replace, and use topsoil to fill in the gap, and seed it. It's a bit late to seed, but you're in London and with any luck, it might grow before winter sets in. Or, cheat - if you cut off any good bits of lawn when reshaping to get rid of the narrower dead patches, fit in the good bits into the gap where you've broken off the damaged bit, infill with topsoil where the joins are and tamp it down, making sure its level with the rest.

Alternatively, reverse and replace as already said, with the dead part still in place, and if it still looks dead in spring, scurf out the dead grass patch, get a bit of a tilth on top and seed it. Unless you bought something exotic like luxury turf, any standard grass seed mix will do. I just hope whoever supplied and laid the turf didn't do so with plastic mesh in the turf, because that makes it more difficult to do; it can be done, but it's a lot more fiddly.

You will notice the patch while it looks like this, and you will notice as new seed starts growing this or next year, but over time it'll all turn the same shade of green as the rest and you won't notice it at all. For a while though, looking at it and being irritated by it should at least remind you to be more careful next time, it's actually a useful lesson.

EDIT: I've got a query - when you say you sprayed glyphosate 'liberally on the beds', were you spraying specific weed growth, or spraying that and all of the soil in the bed? If you did the latter, it won't do anything other than sit in the soil for a while; glyphosate is not a pre emergent herbicide, and its method of action is to kill through the green, meaning you have to apply it directly to strongly growing, green growth, so if there's nothing green growing, it won't do anything.

As you discovered, Glyphosate kills plants indiscriminately (ignoring roundup ready ones). To understand the problem and get a grasp on the way forward, you want to know that -

As far as replacing the grass grows, the supplier is a lot less important then the exact variety of grass. If you can get the identical variety from another source then it should look the same. If not, it might look different. I'd call the supplier of your grass up and get the name of the type. Then try get some seeds of the same from somewhere local or buy it online.

If you are not sure you can get the same variety, you can cultivate grass from the grass you did not kill. I'm not an expert, but I would be inclined to remove the burnt grass, replace the soil which is removed with it, and let the grass grow taller near the edges. It will look a bit messy while this is happening, but it should expand into the unused area. You will want to keep a close eye on the soil where the grass has not established - small weeds are generally easy to pull out - and there will probably be quite a few of them - nature abhors a vacuum, and weeds will try take hold where there is no competition from grass.

9
How do I prepare and sow a lawn organically?
9
Lawn problem - seasonal grass, thatch, or something else?
5
Seeding patches in the lawn
6
Preparation for a new lawn to prevent weeds and encourage growth
6
What species is this large clump of lawn grass?
6
Did I use enough grass seed on my new lawn?
2
Lawn substitutions for yard with active dogs
2
Re-seeding lawn over a newly planted winter grass in warm climate
1
Zoysia weeds, brown spots
5
Looking for input as to next steps for my lawn issue