I got my lawn core aerated the other day. Some parts of the lawn have core plugs that are a nice rich dark color (at least I think this is nice/good). Other sections of my lawn have core plugs that are much lighter. Is that indicative of not having enough organic matter in these parts and the soil has more clay in it? It just so happens that these parts where the lighter core plugs are happen to be the more problematic parts of the lawn (more weeds, more dead spots).

So, the color of soil comes from what is in it or what is NOT in it (as you indicated in your question), its drainage, as well as lawn or land physical Geo (hill slopes, flat, rocky mountainous, etc, and the age of it's contents. Lighter colored soils tend to have less active organic material and more sand or rock. Soil light or very light in color means it has between 1.5-2% organic matter, where your dark or very dark core samples are between 3.5-5% organic matter.

I am including the link where I obtained this information. This site is FULL of soil info and how to understand your core samples. Let me know if you cannot open the link. Also check out pic below link! 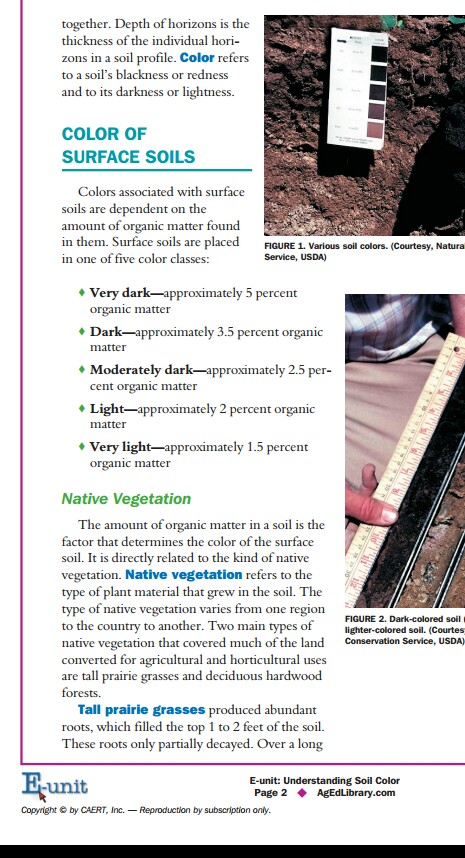 Dark soil versus light soil means lots of different things. First would be moisture content. Second organic material content. Third possibly a layer of non indigenous soil that was installed earlier. Those are the top three I can think of...

You've probably got dry areas of grass where the grass is weakened and of course weeds will move in...I just have to point out that dark, friable, organic 'rich' soil is NOT FERTILE soil. Just great tilth. Soil is NEVER fertile meaning the soil has all the nutrients plants need to photosynthesize to make their own food and thrive. Potting soil is dark and friable. But in no way is potting soil 'Fertile'...People think that the soil on an old forest floor is fertile. No way is that true! In fact, the older and more successful a plant ecosystem is the less one will be able to find the chemistry, nutrients plants need to have! The chemistry is tied up in the biomass of the system.

That forest floor soil most certainly has lots of decomposed organic matter in it...nice and dark. But not fertile.

When rain forests are cut down that soil might produce a meager crop but forget the next year! 'Nutrients' or I prefer chemistry, are only released to the soil after decomposition of dead plant material thus allowing for necessary chemistry for the entire system or maybe a newbie plant can be allowed to find a niche.

I now have pumice for soil for my greenhouse soil. I've had yummy loam soils ijn the past. Mostly I've had clay (to include caliche clay) and if you know how to manage a clay soil it is wonderful soil'

The only way to improve any soil (texture) is by the addition of DECOMPOSED organic matter. Sorry I had to capitalize that word because it is essential to know the difference. Grins. I miss my clay soils!

Do you have an automatic irrigation system? Is this the first time you've core aerated? Have you ever top dressed? What do you use for fertilizer? What type of grass, no where is it that you live? Your observation can tell you an awful lot and I'd hate to let you think it is because you've got 'fertile' soils and 'infertile' soils. Just not true nor meaningful.

Not the answer you're looking for? Browse other questions tagged lawn aeration or ask your own question.

12
When is the best/acceptable time to perform a fall core aeration and seeding on a lawn?
7
Aerate, de-thatch & overseed. Is this really the correct order?
5
How to thicken grass
6
For a patchy lawn, is it better to apply pre-emergent or a lawn patch kit in the spring?
4
Proper sequence of Northeast lawn maintenance this spring
5
Core aeration vs. liquid aeration
4
How can I fix these light spots in my lawn?
1
Sequencing for tick, weed and fertilize treatments for lawn
2
Can I rake and/or mow my lawn after seeding?