Round 2 For Mint Cuttings. Any Tips?

So last time I was here I had bought some mint from Home Depot which started dying on me after a week of having it. I tried moving it outside like everyone suggested but I probably should have mentioned how hot it is out here cause it died after a day in the heat (Triple digits). The cuttings were no good either, they also shriveled up and died after a few days.

This time I bought a mint plant from Trader Joe's and well the original plant died but the new growth is thriving (especially now that the temperature's going down). I'm currently trying out making Terrariums so I've decided to make more mint through cuttings. I'd like to know some tips and things to make sure everything goes right. I also have a basil in the cup to see how that goes. 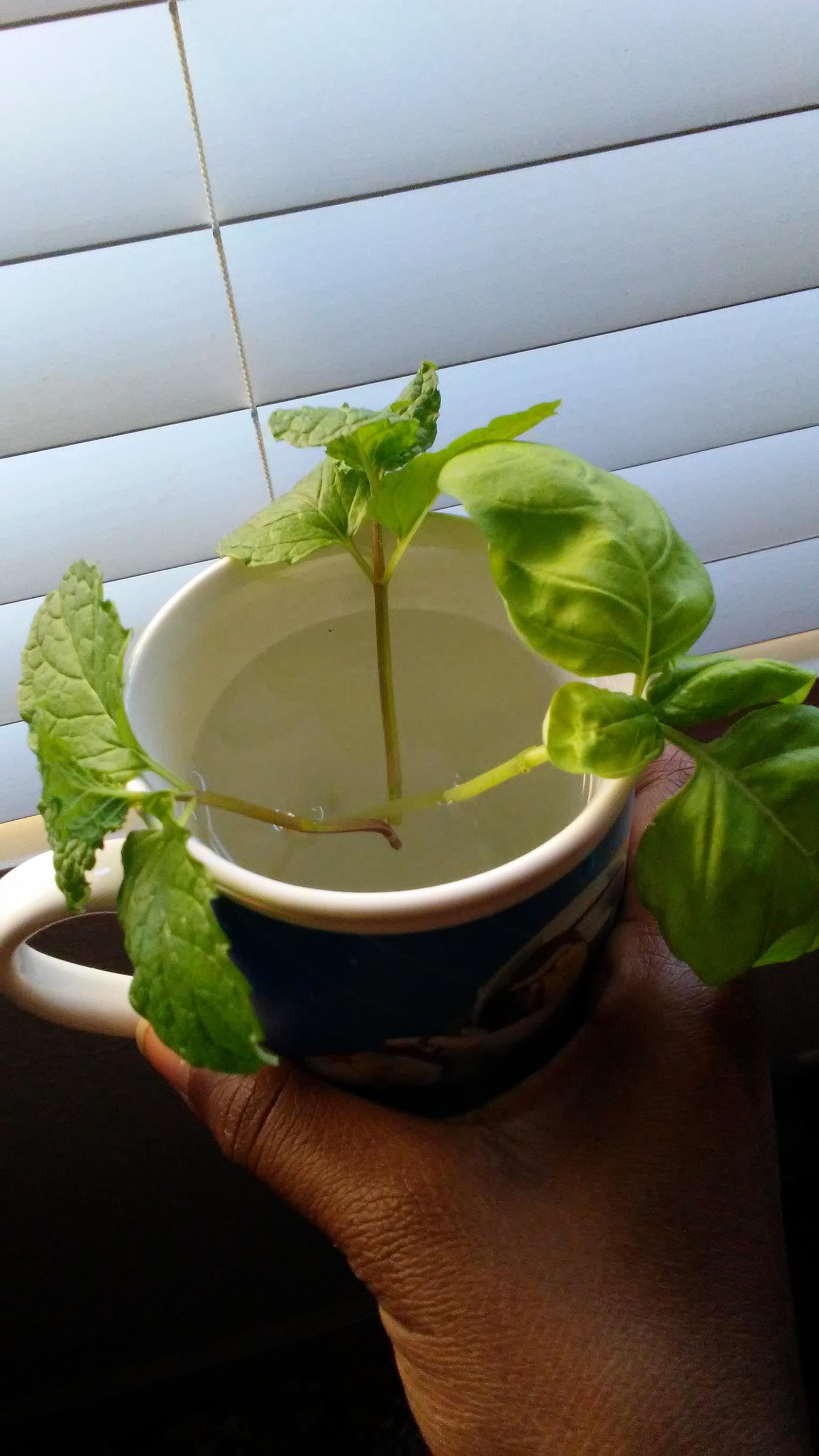 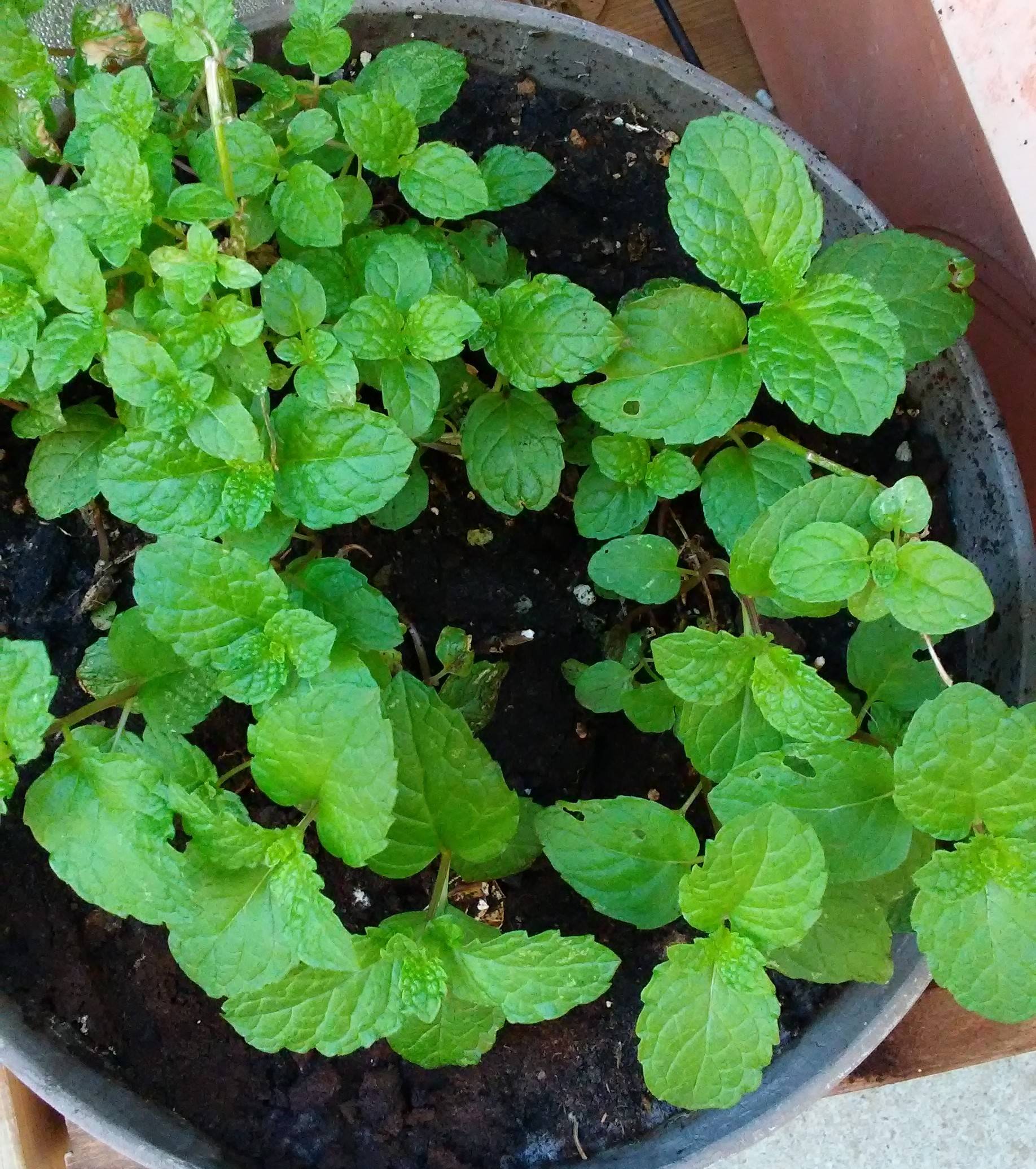 Well the plant in the pot looks healthy, but a couple of things about mint. You mention a terrarium as being the reason you've tried taking cuttings from the mint, but mint is not a good subject for a terrarium anyway - whilst it likes fairly damp soil, it wants to put down deep roots and spread widely sideways, at the same time as getting up to 18 inches tall, and it won't be able to do either of those things contained in a terrarium. It spreads by means of stolons, which are underground stems that go along the ground and pop up some inches away from the central plant; over time, the central, original plant often dies out, but is now surrounded by new, widespread growth. It is an invasive plant in the ground, which is why many people prefer to restrain it in a container.

It can be grown in a pot, but it should be turned out of the pot in spring, cut in half, any dead bits removed, then repotted into two separate pots. In this way, it's possible to continue to have mint in pots, which isn't a situation it likes very much over time, given its natural growth habit. Looking at the pot in the photo, it looks possible to split the plant now, but I don't know where you are in the world and whether it's about to get very cold very soon - if that's the case, best keep it going till spring as it is, although, if its still in the same pot you bought it in, then I suggest you split and repot now anyway, or it may not make it to next spring. Bear in mind that out doors, mint is a hardy, herbaceous perennial, meaning it disappears below ground completely in winter.

Given it responds well to being split in this way, that's the best way to generate new plants; I'm not at all sure trying to root it in water would work, though I've never tried. Its invasive nature means it's quite easy to raise new plants from an existing, larger plant successfully.

Not the answer you're looking for? Browse other questions tagged basil cuttings mint or ask your own question.

13
My basil had a shock after transplanting. What did I do wrong?
5
Is it a problem that the stems of my mint cuttings are curling?
6
How often can you produce cuttings from mint?
7
Can I grow mint from cuttings indefinitely?
5
How do I grow a basil plant tall?
12
Will my basil plant regrow without leaves?
4
How can I enhance the flavour of peppermint plants?
4
Should I Take It Back Or Keep Trying To Bring It Back (Resolved)
3
Is something wrong with my plants?
2
Brown Tips on Oregano Cuttings