Can I plant cilantro with roots on it that I bought in the grocery section of a store?

I bought this cilantro in the grocery department of a large store. As you can see in the picture below, it still has roots attached. (I can post a clearer picture if you want.)

Would it start growing if I plant it in a container? 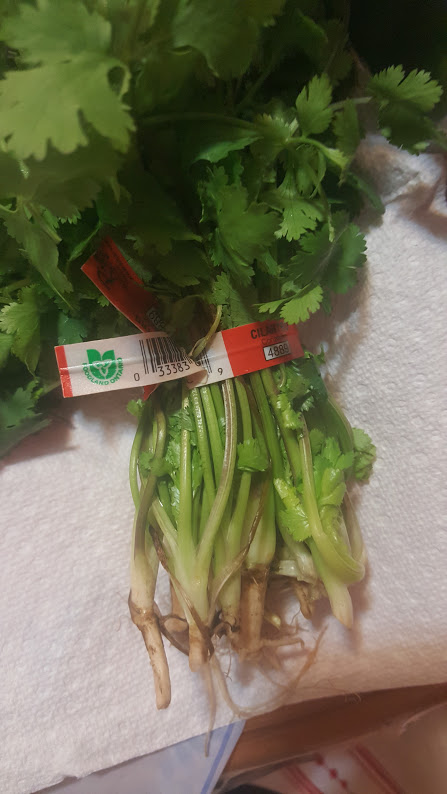 It's a somewhat borderline case.

For those plants that have just a bit of the top roots left, you probably won't be able to plant them with success. But I also see some longer roots and what looks like one plant with a slightly more complete root system. As a gardener, I would seriously be tempted to try and plant this specimen.

If you do so, make sure you reduce the number of leaves significantly, because the plant won't be able to draw enough water and nutrition from the soil.

I suggest you use most of the greens, leaving the core intact, and plant the remaining roots in free-draining potting soil or into your garden beds. Note that a bright spot indoors might be a better choice right now, outside you need to protect the plants from too much sunlight initially. And if you decide to give it a go, do so as fast as possible, at minimum remove the leaves or they will draw water and "energy" from the roots - which is actually the reason that this cilantro was sold like this.

Note that cilantro is a somewhat short-term herb:
It has a tendency to bloom and set seeds after just a few weeks, and once it has grown its seeds, the plant has completed its life cycle and dies. So if you were hoping for a long-lived plant companion, this won't happen. But you can still get more leaves and ultimately seeds (for the kitchen and/or more plants) if you manage to get the roots to grow.

Not the answer you're looking for? Browse other questions tagged growth herbs cilantro or ask your own question.

28
How do I help my kitchen window herb garden thrive?
4
Is this coriander or bolted parsley?
5
Date palm just growing in height but not getting a trunk
3
A strange plant grew out of where my cilantro used to grow, can someone identify?
7
White ring of pus forming around branches
1
Should I separate the cilantro plant stalks? I bought a plant from walmart
1
Reduce Waste | Starting Herb Garden from left over Herb Sprigs
2
Passiflora Snow Queen is drying out
1
How should I stop my cilantro plant from falling over?
1
What is this pest on my oregano?