What disease is causing yellow bumpy leaves to travel down my sugar baby watermelon plant?

I have a sugar baby watermelon plant. The leaves have a problem near the main stem coming out of the ground, and it's clearly traveling down each vine.

It is yellowy brown and bumpy and covers the whole leaf. 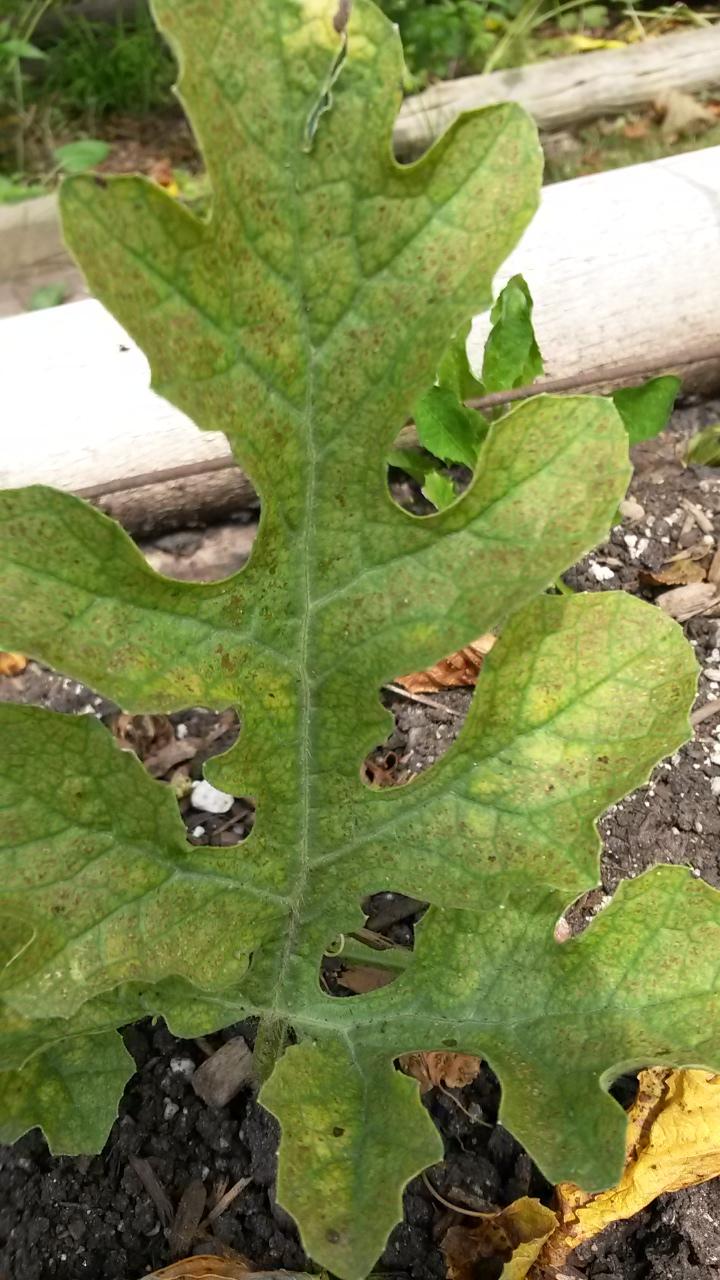 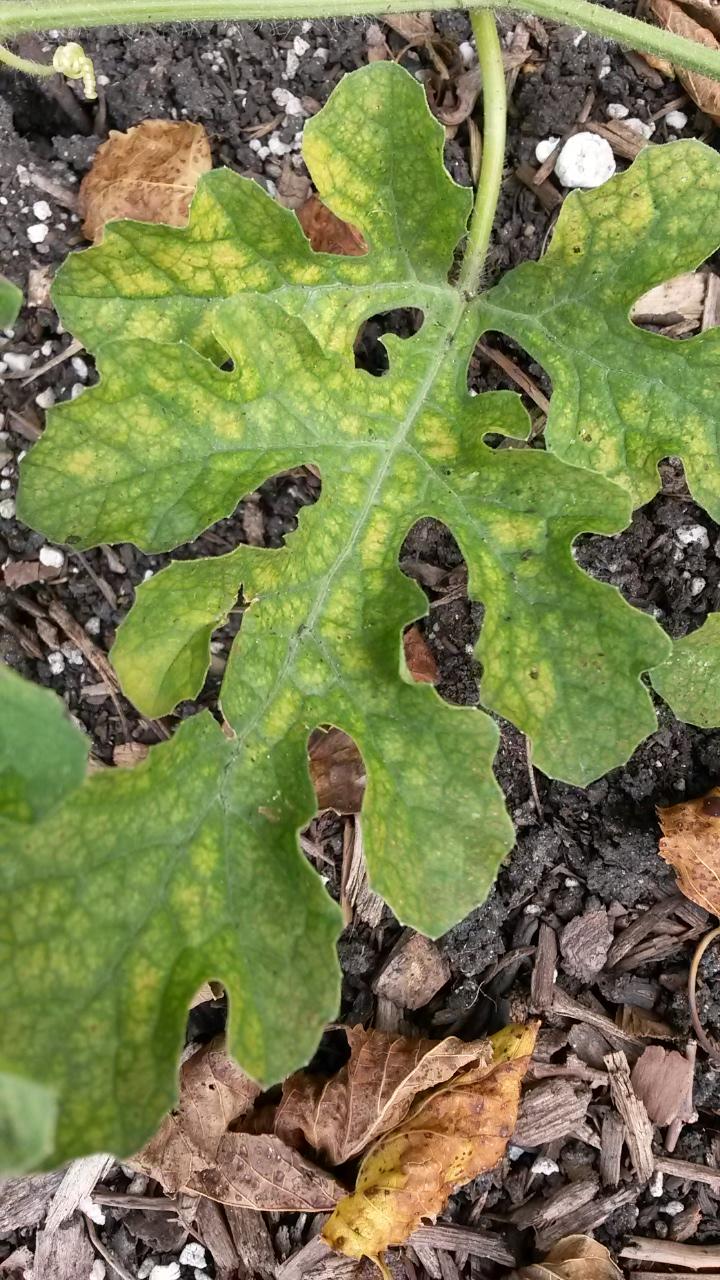 The watermelons in my garden get a lot like this every year, beginning around the middle of August or so, and the fruits usually ripen soon afterward (whether or not they would have without the affliction; so, there are pros to it, if you live in the north, I guess). It doesn't harm the edibility of the fruits or the rinds, in my garden (even though the rinds may be speckled or look stonewashed). In a more humid environment it might cause fruit rot, though (but I haven't seen that more than a few times, and potentially less in my garden).

My plants appear to get both spider mites and anthracnose, which cause symptoms similar to this (I've read that spider mites can spread anthracnose, and it seems to be true). What you have is possibly another fungal infection (maybe alternaria, maybe without spider mites), however, but it looks pretty similar. The ground cherries, some tomatillos, and other plants can get similar symptoms, but the leaves don't eventually get dark, dry patches like the watermelons' do (soon before they die), and they don't usually die like the watermelons do.

I've noticed that vines that grow the furthest away from the main body of watermelons (in any direction) tend to be the least affected (including those that grow under/through other kinds of plants; there might be companion plants that would help prevent it), but otherwise, it kills the foliage and the plants. It's possible that only growing one hill of watermelons per area might help (crowding might contribute to infection).

Red-seeded Citron is the only variety out of 50+ that I've found that doesn't seem to be easily infected by it (and a 2nd-year Ledmon lived until around the end of the season, notwithstanding it was infected). However, Red-seeded Citron is not a regular watermelon for regular fresh eating. Some varieties I might recommend trying, if you tend to get this every year, are Blacktail Mountain, Santo Domingo Winter, and Verona. Blacktail Mountain is too early to be bothered by this much. Verona is pretty early, too. Santo Domingo Winter still got fruit of a normal size despite getting infected like the rest (and despite not being watered at all except early in the season; I got about 75 small watermelons from all my varieties this year—they were probably smaller because I didn't water them much, but a much higher percentage are fully ripe this year, whereas last year when I watered them a lot, a higher percentage got bigger than this year, but a much larger percent weren't fully ripe when the plants died). Whatever the case, the problem causes them to ripen faster (whether or not they're all ripe, when the plants die, or the tendrils shrivel, per se).

Cantaloupes/muskmelons are very resistant to foliar problems with this. Tomatoes in my garden aren't normally affected on a foliar level, even grown in the soil the watermelons were in the year before (although I've had at least one tomato that was infected, which one tomato got it from a neighboring infected ground cherry). Peppers (foliage and fruits) don't seem bothered by it (in my garden; anthracnose does commonly infect peppers and tomatoes, however, particularly the fruits, and especially causes symptoms post-harvest, and including in the refrigerator).

Look for webs on your plants to see if spider mites are there. They might not be (maybe it's just a fungal infection), but if you see threads of webs on the leaves, that's usually a good indicator that you've got spider mites.

You'll note that a lot of watermelons are resistant to anthracnose. This, however, only seems to apply to the fruit, in my garden (the fruits of resistant varieties don't seem to get speckled, and they don't get black in a large spot and rot), but the foliage still seems to get anthracnose in my garden (whether or not the fruit does).

I don't think the problem is caused strictly by soil, though. Someone else down town in my area this year had the same issue as my watermelon in containers with soil that wasn't regular garden soil (before my watermelons showed problems). I think there are a lot of spider mites in my town. It's very hot and dry (and semi-arid), which helps to contribute to spider mite infestations. I didn't see webs on hers, though (so maybe she was just over-watering them, or something; they were pretty wet).

In the comments, someone was talking about red dots and such under the leaves. I think they were thinking of a kind of spider mite. Not all kinds of spider mites cause such dots, though (I've never seen that in my area).

I'm guessing your soil might have a nutritional deficiency, too (based on how the older leaves are affected first), but I'm guessing this is fungal whether or not that's the case. Maybe the pH isn't right. Magnesium deficiency is one you might check; it can cause chlorotic leaves with dark veins, anyway (and it's a mobile nutrient, which means it would affect older leaves first).

I've never had issues with Sugar Baby, but I haven't grown it in years (and we didn't used to have spider mites all over the place). 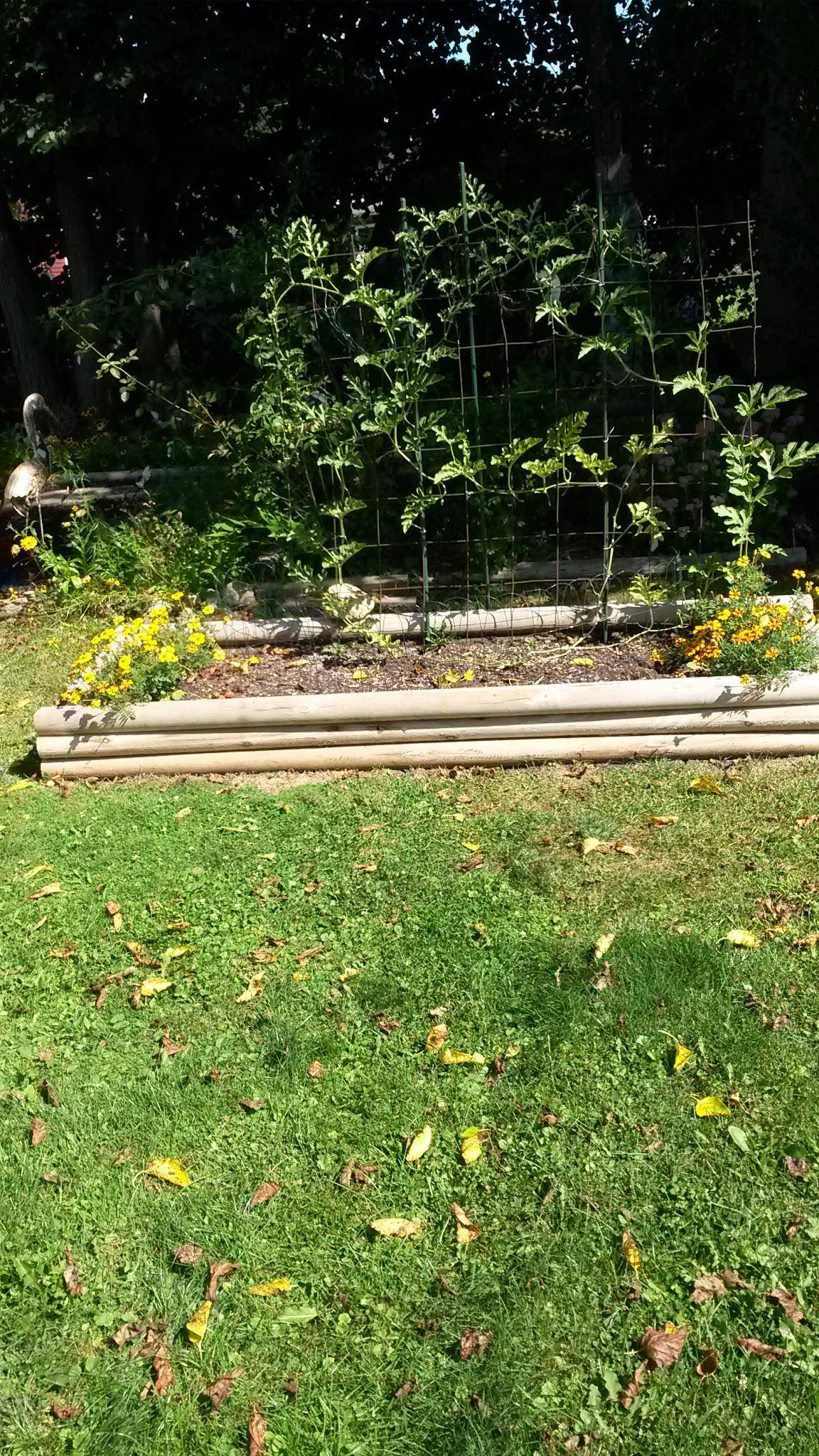 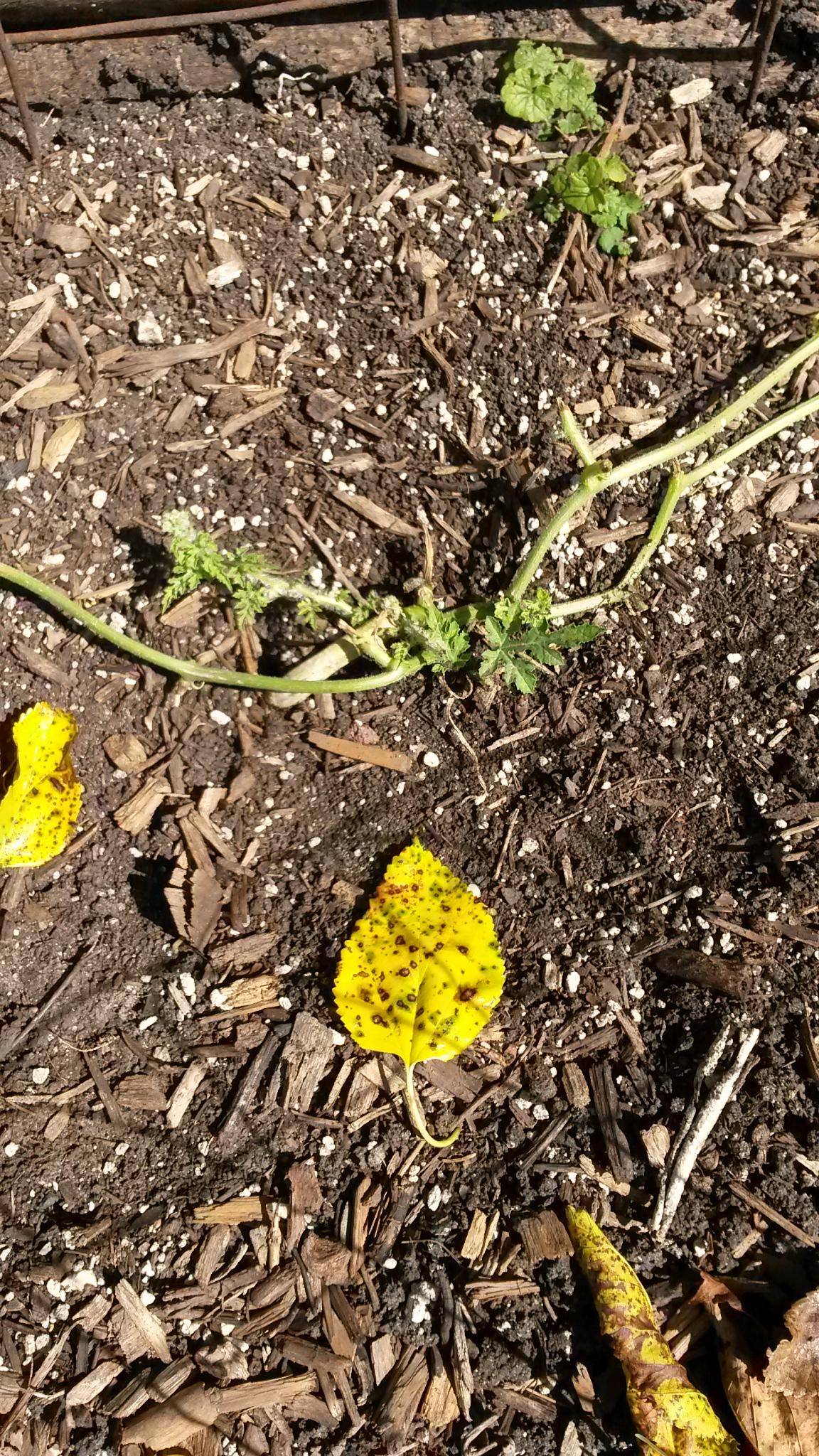 This is one single plant.. the raised box is brand new this season filled with 4 -2cuft bags of premium top soil 4 -3/4 cuft bags compst fertalizer. 3 - 2cuft bags premium top soil.. all store bought. upon further investigation, the second pic includes a diseased leaf from what i believe to be a dogwood tree. that i believe is the likely culprit for the disease that i believe is anthracnose. I have been spraying with the bakingsoda/veg oil i mentioned earlier in post. It seems to be working..not much time left in season..

Not the answer you're looking for? Browse other questions tagged diseases fruits watermelon or ask your own question.

2
Watermelon plants not growing
4
Leaves are dying slowly on Raspberry plant-what on earth is wrong?
2
Unexpected wilting and leaves curling in a serrano pepper plant
4
What is causing the brown streaks and holes in my young cherry blossom tree's leaves (Ireland)?