Last year I transplanted six box trees from my brother in law's garden. One of them, the biggest (see last image), turned completely yellow without losing a single leaf, so I cut it down.

Now another one of the trees is doing the same thing. I can't keep cutting them down because I would like to know how I can fix them.

I already tried with pesticides for branch death (or whats that called in English?) and the typical boxtree moths.

I don't water them that often because they are in the ground.

I have three others that are in my chicken coop and those are doing great. The fourth one, though, is doing bad (first two pictures). I cut some of the yellow branches because they are dead anyway.

I attached some pictures so you guys can see what's going on: 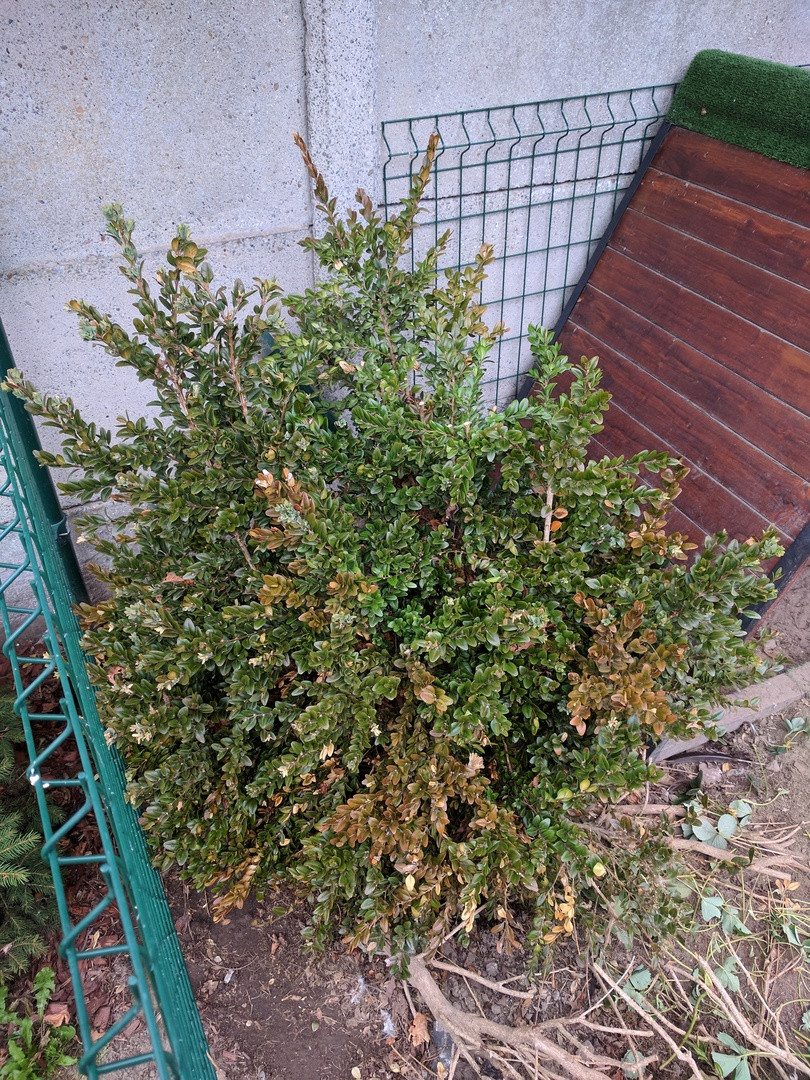 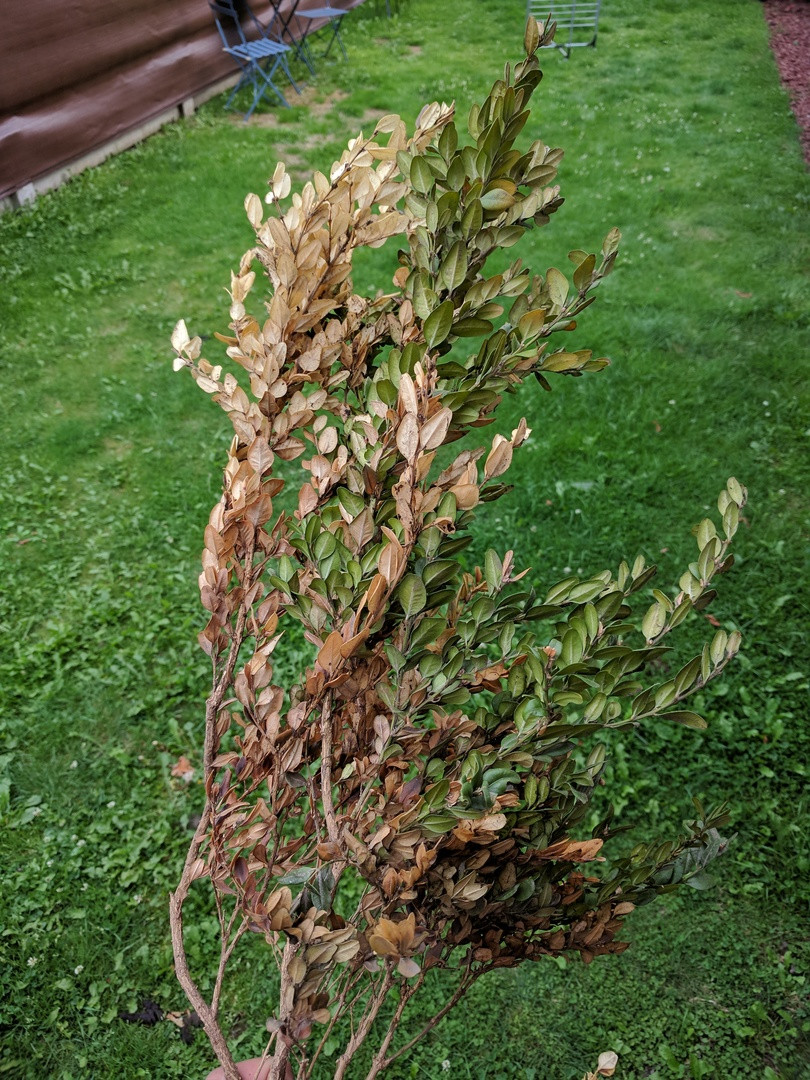 The image below is of the now-cut-down buxus tree. It turned completely yellow without losing a leaf. I guess that my other buxus plants are going in the same direction. You can also see the left buxus being in pretty good shape. This is the one that is now turning yellow/brown as well. 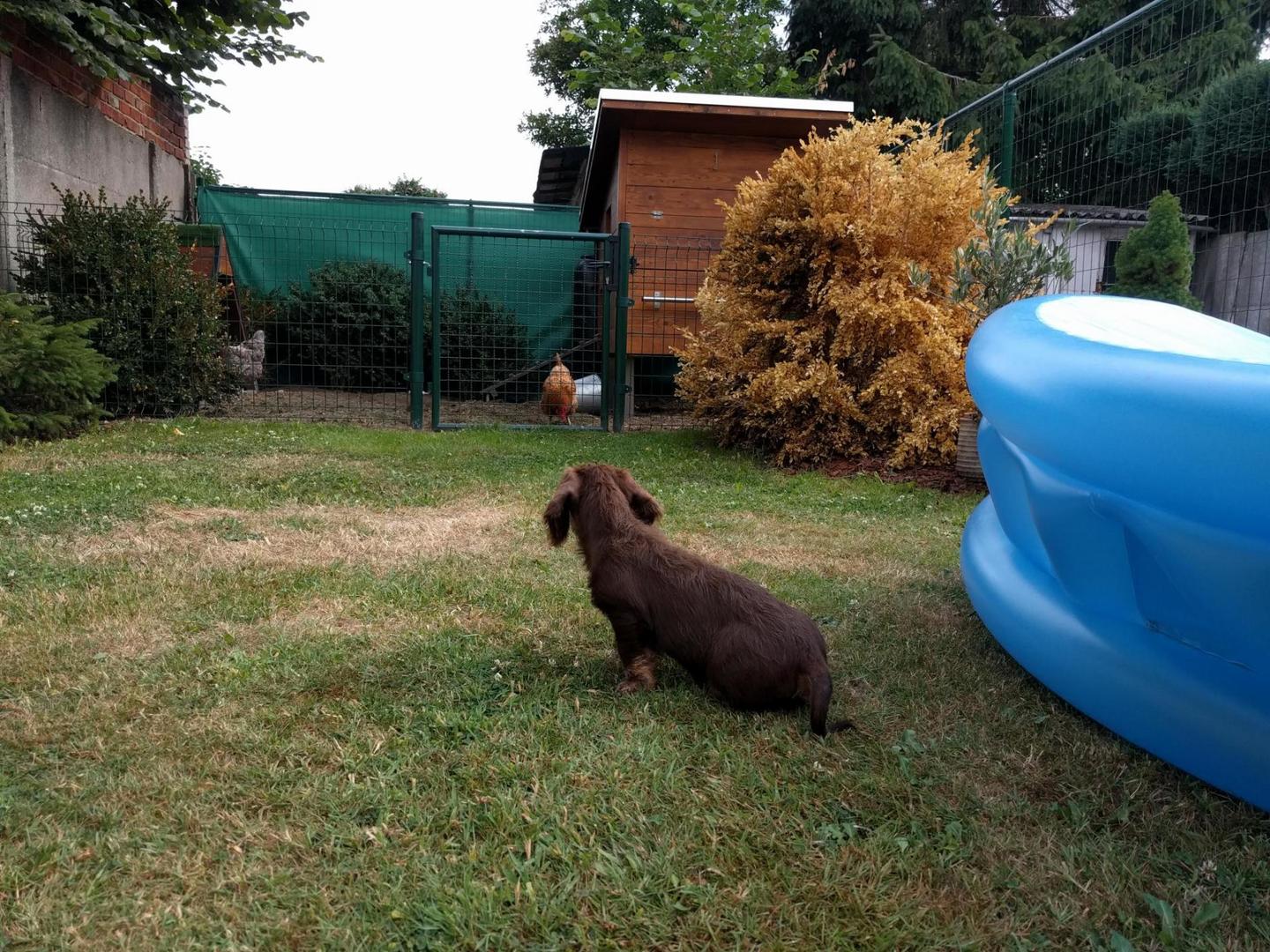 To answer the questions in the comments:

I transplanted them near the end of the dormant season. The trees were going to be thrown away so there was nothing to lose, i guess. I believe it was September or October last year. There were six of them.

The pesticides were used based on a recommendation of the local store, so I did not use them willy nilly. I am a beginner gardener so I might be gullable, sure. The box moth, however, was clearly visible. The branch death was a guess by the store owner.

And I water all my plants properly according to the weather. I was told that buxus trees and other trees in full ground don't really need that much watering unless there is a drought.

It's one of two things. Either it's drowned or it could be box blight. Cylindrocladium blight, Pseudonectria rousseliana, is very nasty. It's best to destroy and not replant. It's possible that the plants were mistreated before you bought them, or possibly when the plants were transplanted did you damage the roots too?

I still stand by my second idea-box blight, it's really becoming a major pain over here in blighty! I see it more and more often! It's a fungus that spells doom and gloom for all the box in ones garden! If there are black spots on its leaves and stem and it's totally dead right down to the base of the plant, best dig it up and burn it!

I know it's the worst thing to hear, but hopefully I'm wrong and the other plants show no signs at all. You could replace it with something similar other than box. It's worth looking around the internet to see pictures which compare with your own, to help you make a choice.

This article shows some types that are resistant against boxwood blight.

Not the answer you're looking for? Browse other questions tagged plant-care boxwood or ask your own question.

5
Why is this boxwood suffering? Is it box blight or an insect-infection?

5
Why is this boxwood suffering? Is it box blight or an insect-infection?
5
What is this big caterpillar in my yard?
1
Why my indoor Fuchsia is wilting?
2
Why did a dwarf mammoth sunflower grow?
3
Can I save my Dwarf Umbrella (Schefflera) Tree?! It's suddenly dying (possibly my cat?!)
1
Why are my indeterminate San Marzano tomato plant's leaves turning yellow?
1
Are these whiteflies under my tomato plant's leaf?
1
Where to place grapevines in the hot Australian sun?
1
What are these yellow splotches on some Christmas Cacti (Schlumbergera) I rescued? Are they a positive or negative sign?
2
Aglaonema Firecracker leaf turning yellow with brown spot. Sunburn or overwatering?