Another album of updated pictures

One leaf before being "washed" with a mild soap/water mixture 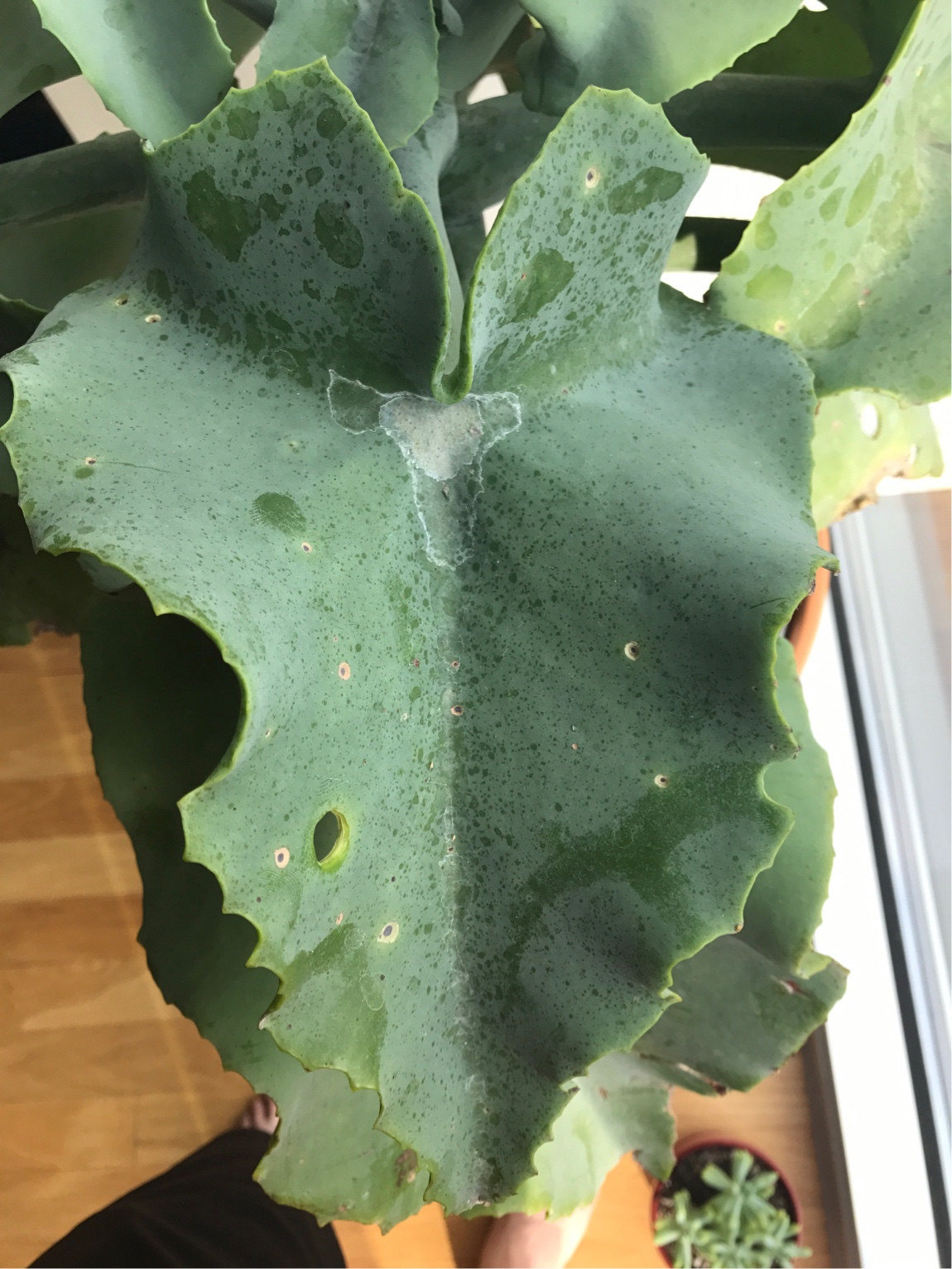 Another leaf after being "washed" with a mild soap/water mixture 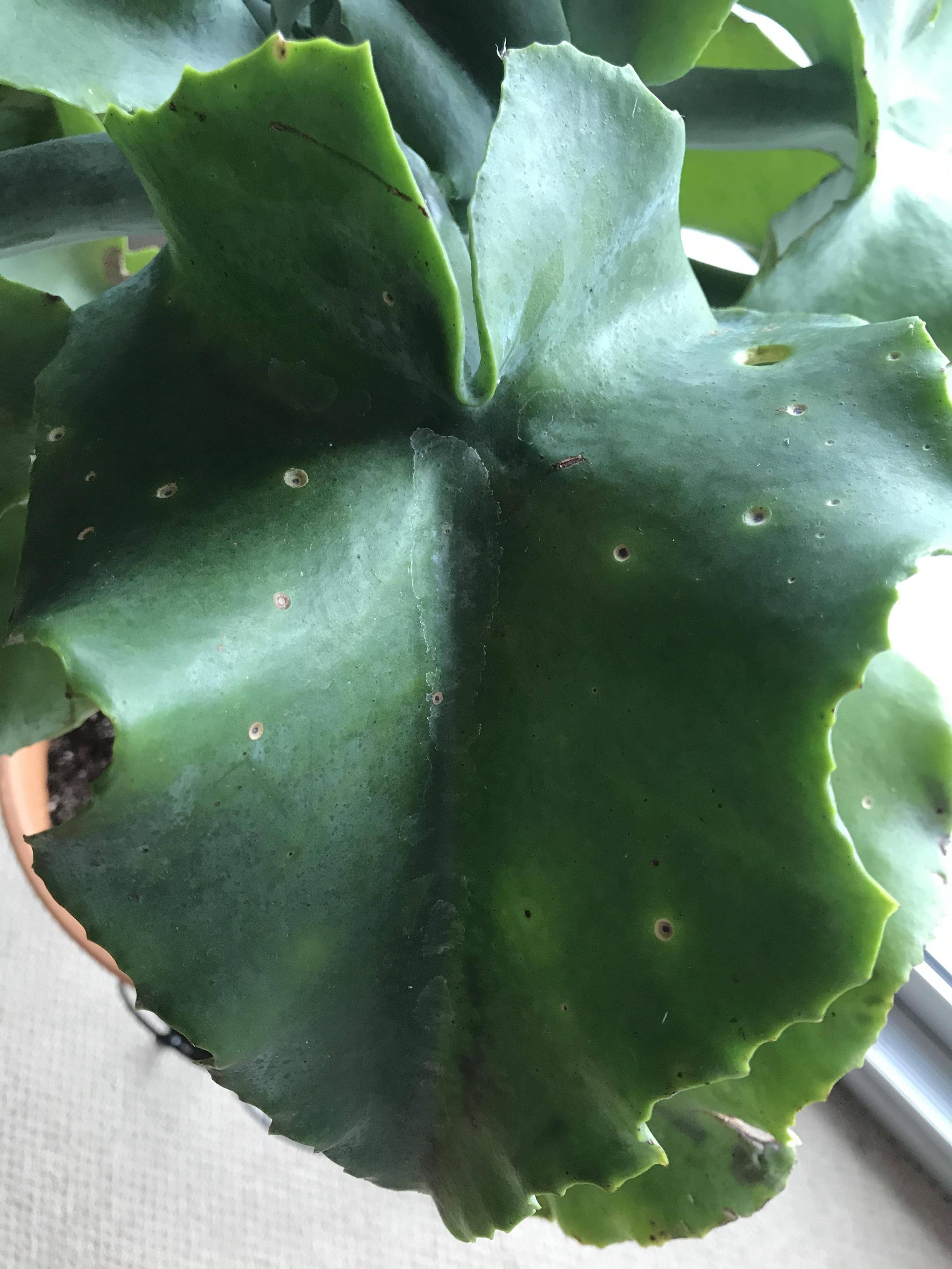 I purchased this plant a little over a month ago, and all of a sudden, these spots have begun to show up. The spots themselves are dry and can be popped out of the plant leaves where they've appeared (as a result, there is now a circular hole in one of my plant's leaves).

As the pictures indicate, the spots are roughly circular with black centers. Up until yesterday, the plant was kept in a mostly-shady, west-facing room and was watered ~1 time per week (when the soil was completely dry. Thinking the spots might be due to a lack of sun, I moved the plant over to a south-facing window (6+ hours of sun per day) yesterday.

Perhaps this is Cactus Anthracnose? If so, how do I treat it?

EDIT (More Information): As far as I can tell, the leaf edges are normal for this kind of plant (part of it's appeal imo). This plant lives indoors near a window, but not one that has been sprayed with anything recently. Additionally, none of the other plants in the vicinity have any issues. Two days ago, I wiped the leaves down with a mild soap/water mixture. I also treated one leaf with an alcohol/water mix, and another with a copper fungicide.

Unique picture and problem (s)! Looks like there are two things to consider; the spots look like a spray of some kind possibly with a surfactant/soap? Maybe it is just me but the margins of the leaves look like a cutworm has been dining? The scale is probably throwing me off. Is this plant out doors on a patio? In doors? Near a window where someone sprayed Windex whilst cleaning? Otherwise, no disease of any sort. Those spots are mechanical not organic. Send more information! Please.

Edit: I don't think there is a problem that will ever kill your plant. Mostly likely a seasonal insect of some kind. Please watch this plant carefully. You might have a leaf miner larvae making 'mines' while feeding on your plant before it 'flies' away. Check out the soil. Dig around to find any insect, worm, larvae you are able to see. I miss my library of books. Using this internet is tough! And not very informative even having all information at your fingertips!

We need to find a more solid ID before any solutions should be done. Keep an eye on your 'test' leaves. I don't think this is fungus at all. Fungus would be a secondary problem not the original which I think is some sort of a fly...it is able to bounce around willy nilly.

Please send pictures of anything new...? I'll keep looking. This absolutely conical shape for those spots should be crystal clear somewhere on this computer.

Oedema? caused by slightly too wet atmospheric conditions? this ones stumped me but there is something quite like this found on Pelargoniums and Peperomia. the only way to get rid of this is to start again with fresh plants? I've also found something very similar on apples too again caused by overwatering? Perhaps this is a physiological problem rather than a pest/fungal problem?

Just an anecdotal answer - I saw some birds (jays) pecking at this succulent, and it left a very similar shaped indentation after they dried. I did not see insects on the plants but that may be what the birds were after. they weren't plucking leaves. 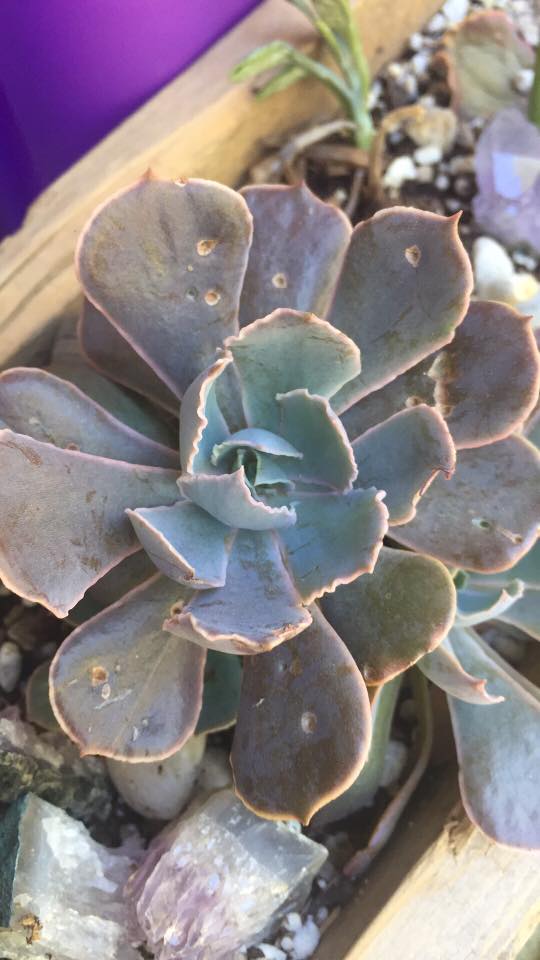 It has been nearly two months and the plant's health is deteriorating rapidly. Multiple copper fungicide treatments haven't had any effect, nor has putting the plant outside in full sunlight.

The disease appears to be spreading exponentially, so I'm willing to bet that this is something in the vein of cactus anthracnose.

For the record, I spoke to the nursery where I purchased this plant. While they didn't know what the cause of the disease was, they had seen it destroy several other plants previously. 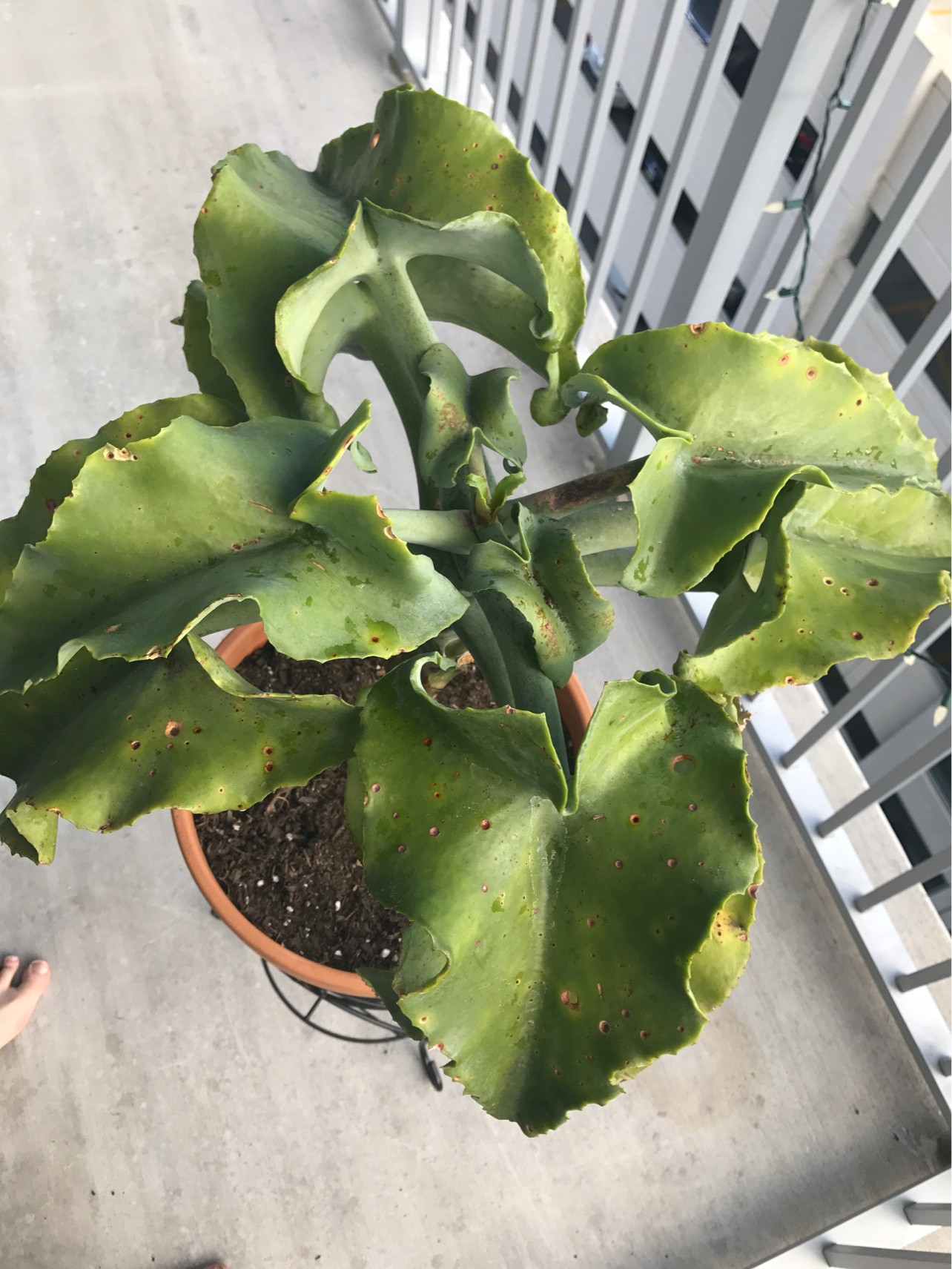 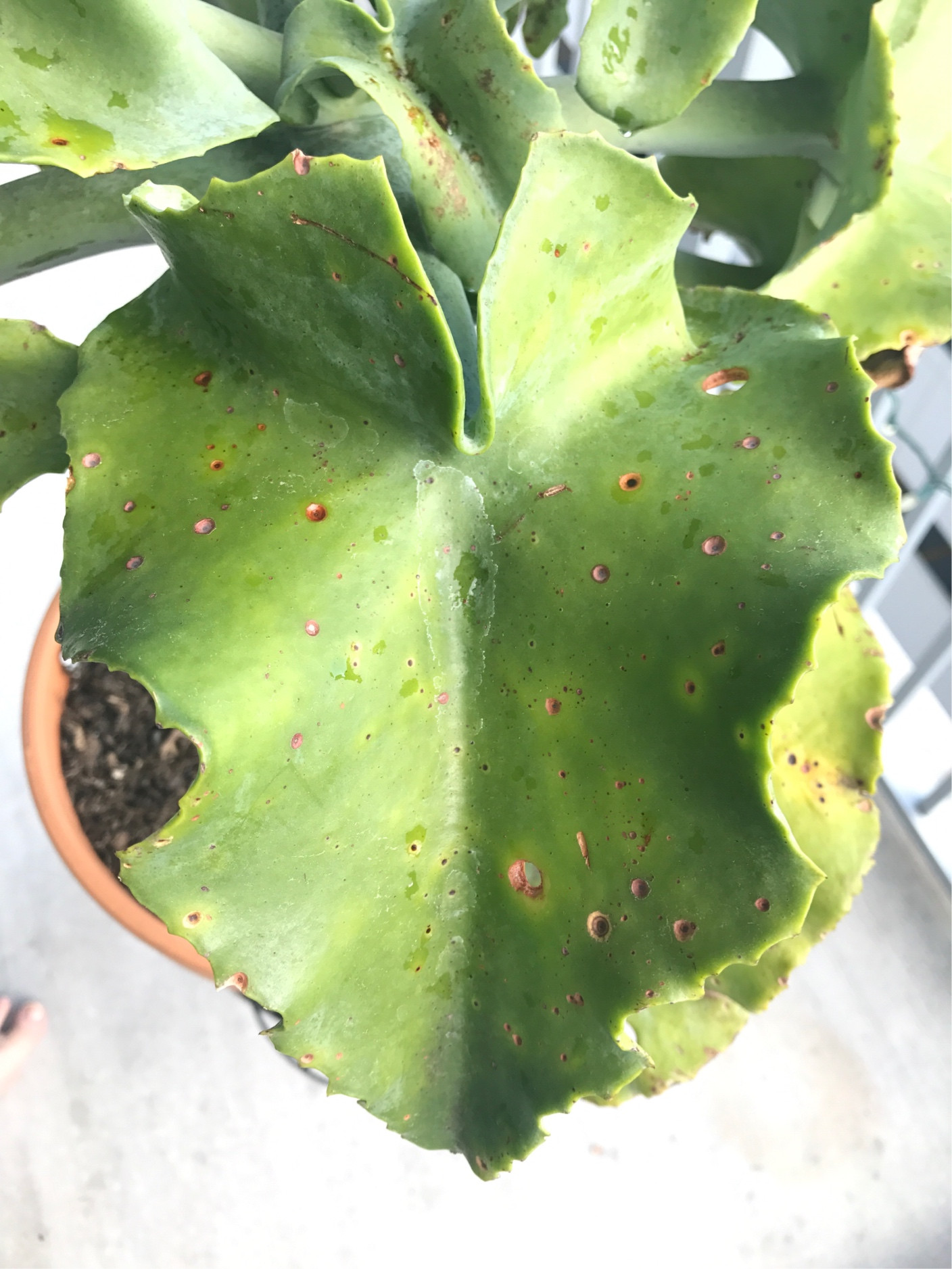 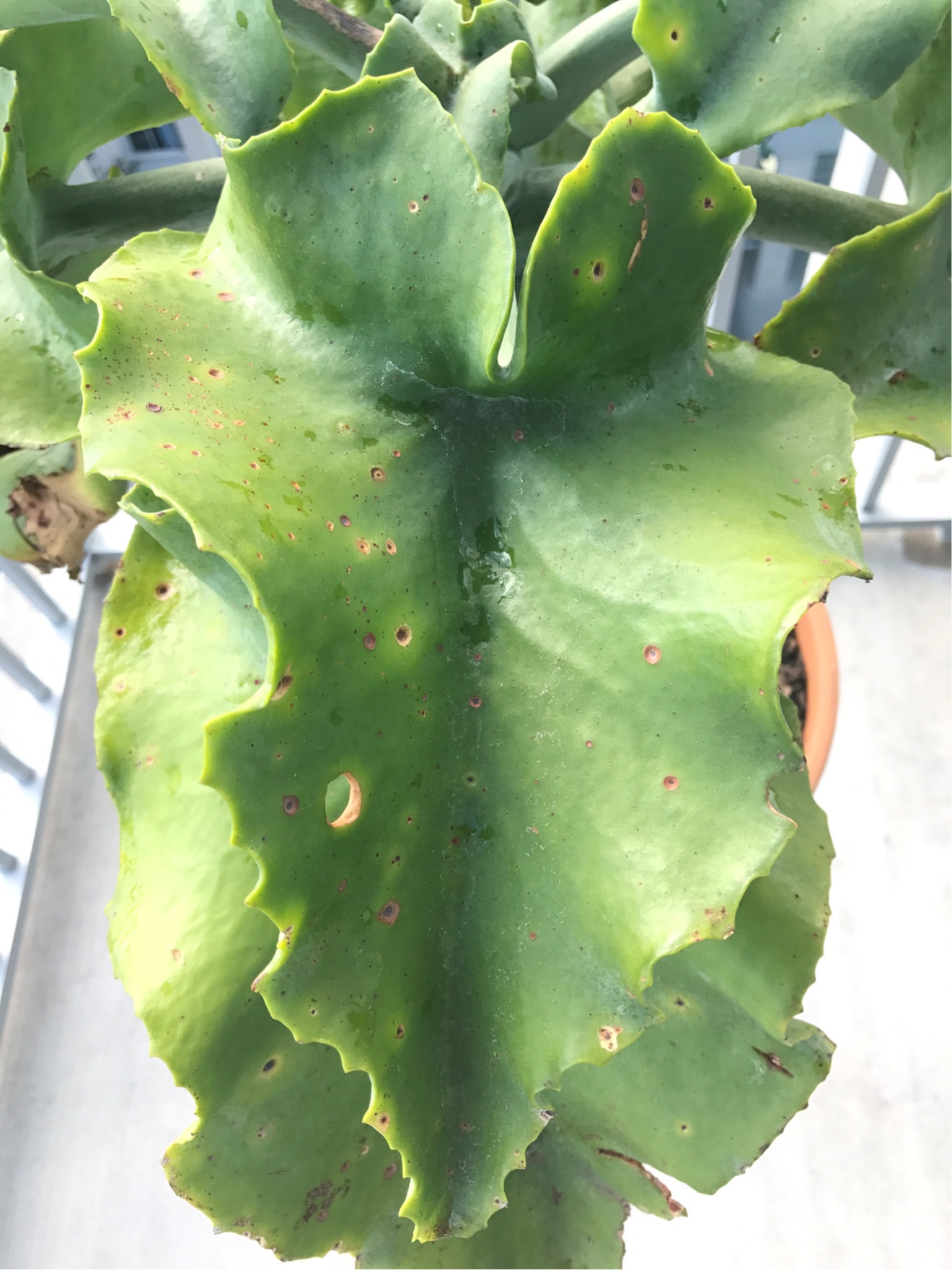 2
Brown spots appearing on roma tomato leaves
4
Young avocado plant has brown spots spreading on leaves
5
What is this powder-like substance on the leaves of my kiwi tree?
7
White and brown spots on cacti
2
What is wrong with my cactus?
3
Brownish yellow spots on monstera
4
What are those brown / white spots on my cactus?