What is wrong with this Shaina Japanese Maple

This tree used to be red when I bought it. Like my other Japanese maple (Coral bark) it lost its original color. I understood that this might be either because of the stress induced by replanting the trees and changing the environment (nursery vs open space) or due to soil conditions (water, nutrients oxygen-lack of it)

I decided to wait to see if the come back to the original colors. Can't say that they are but I am not seeing an aggravation of the situation so I decided to wait till next spring when I will help the trees with some stimulants.

In the mean time I noticed that the Shaina maple has some problems as you can see below. This is mostly on the part of the tree that is more exposed to sun. This morning when after about two months of being busy with other projects I looked at the tree and I noticed the above. Another thing that I should mention was two very colorful bugs which I removed before thinking I should take a picture 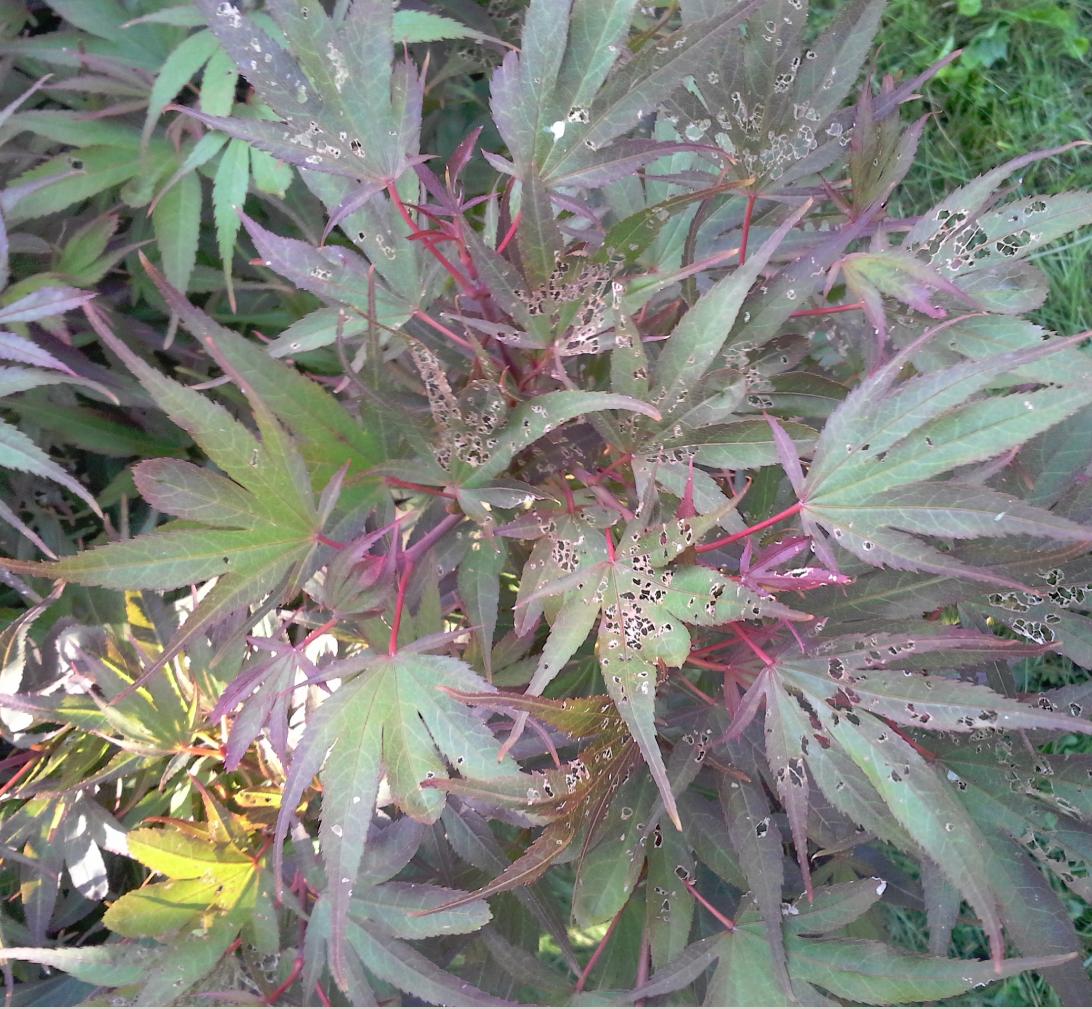 The shape of the bugs was like this (the vivid colors, there was no brown on those bugs)) 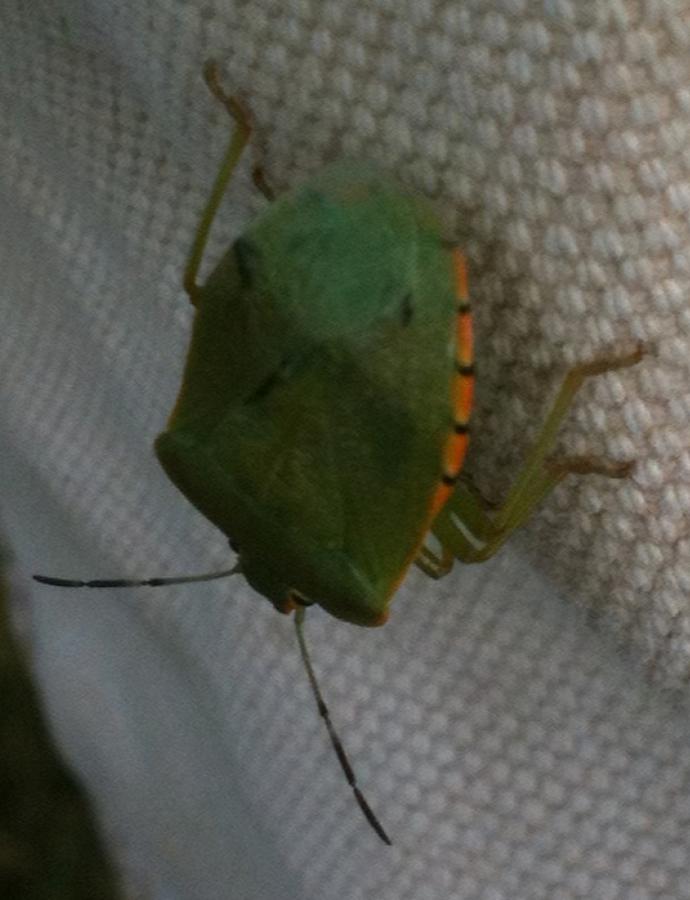 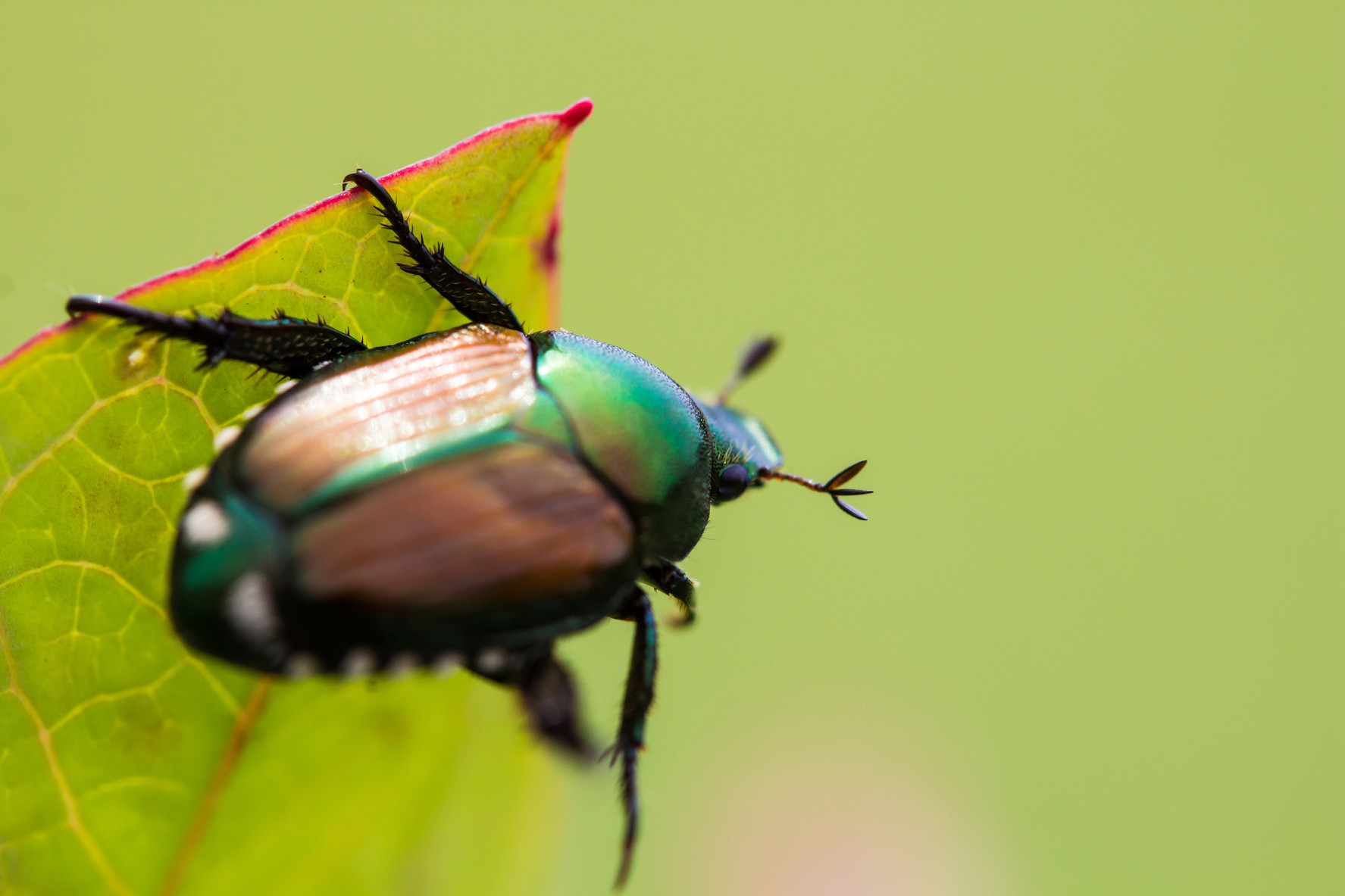 Usualy leaves "eaten" that way is the work of caterpillars or larvas. It is very likely in my opinion.

They are very hard to spot sometime because they camouflage under the leaves or the trunk.

I would start to look out where the leaves are the most eaten, to where there are new holes if you can remember and spot new ones...

Japanese beetle damageMiniMe...this doesn't look like coral bark japanese maple to me at all. Coral bark has coral colored bark with light green leaves. Not purple at all. You've got a squash bug and a Japanese Beetle. Lots of insects chewing on your very stressed maple. Have you fertilized this tree ever? The beetle would be the best culprit for munching on the leaves. This is not the correct color at all for coral bark japanese maple. Some Japanese maples Acer palmatum...do have this coloring but if this truly is Coral Bark Japanese Maple, looks like a major case of Phosphorous deficiency. A weakened plant is highly susceptible to insects and disease. Please add more information...something is off here. Thanks, MiniMe

Your problem is that Japanese Beetle. Check out the site...it is a 'skeletonizer'. Ruins leaves but rarely kills. The problem is mostly with the larva in the soil an inch or two from the surface feeding on the roots. Dig around a bit, take a picture please! Sorry, I hadn't heard Shaina as a variety of Acer palmatum.

I just looked up your stink bug; the Green Stink Bug. Who is in charge of coming up with these oh so creative names? The time of year is right late July through August and they are very bad skeletonizers as well. They've become more of a problem lately. Green Stink Bug Raising a Stink

I would clean up all debris, weed wack down all weeds and clean up before winter and in the spring, clean up debris again. Put debris in your compost but add nitrogen, turn and water your pile to get it cooking...the eggs and instars overwinter in the debris. Japanese beetle population will also be affected by this cleanup. For Japanese Beetles, their larva in the soil around their favorite plants such as your maple needs attention. Dig down and inch or two within a foot radius of your Maple. Check the hostas and roses as well to see how many larva are present. BT would be a good pesticide to use for the soil only. There is a BT made for beetles, the adults as well, but I haven't seen it on the market yet. Won't hurt birds, frogs and the other predators that keep these two insects in control normally.

Not the answer you're looking for? Browse other questions tagged diagnosis diseases maple japanese-maple or ask your own question.